Connecting dots with the Cubs: Sveum and Girardi. Well, some reporter started it.
I didn't even want to say anything.
But now it's a thing.
What does this evaluation of Dale Sveum really mean?
Is the timing significant?
Especially since Joe Girardi's contract with the Yankees expires at the end of this season?
At first I thought man, give Sveum a break.
No matter what you think of his moves during a game, think of all the crap he's had to work with.
All the patching.
All the patience.
But...I've been pretty busy - I didn't even know about Girardi's contract til a couple days ago (thanks Bob).
Joe Girardi?
That's the guy I was hoping for in the first place, and I'll bet (other than Ryno) he was at the top of your list too.
Here's a Theo Epstein quote from right after he was hired (and I wrote this down by hand so hopefully it's exact): "I don't agree with the word "rebuilding" ever. Because, for one thing, it denotes that you're building something that already existed. But that's not how baseball works. You're constantly growing and moving onto the next iteration of the club. So I think "building" is the appropriate word."
Oh wait, here it is (dated Jan 31 2012 on MLB.com).
That part that goes "You're constantly growing and moving onto the next iteration of your club" is what kinda jumps out right now.
And I say hey man, if they can get Girardi?
Sign me up.
Even if it feels like the rawest of deals for Sveum.
To be clear, this whole thing, while it isn't just a buncha hooey, is SO not the most important thing going on with the Cubs.
But since Girardi won't talk about his contract situation til the season's over, I'm sure we'll be talking about it til then.

The 3:05 Braves game today is Travis Wood's 2nd to last start - he'll face the Cardinals next Thursday - and I sure hope he ends up with a couple more wins.
Right now he's 9-11, so there's an outside possibility that he ends up .500.
Either way, he's been one of the few really nice stories from this season.

The Chicago Cubs. If luck was a dog, then it peed on the rug. (painting) 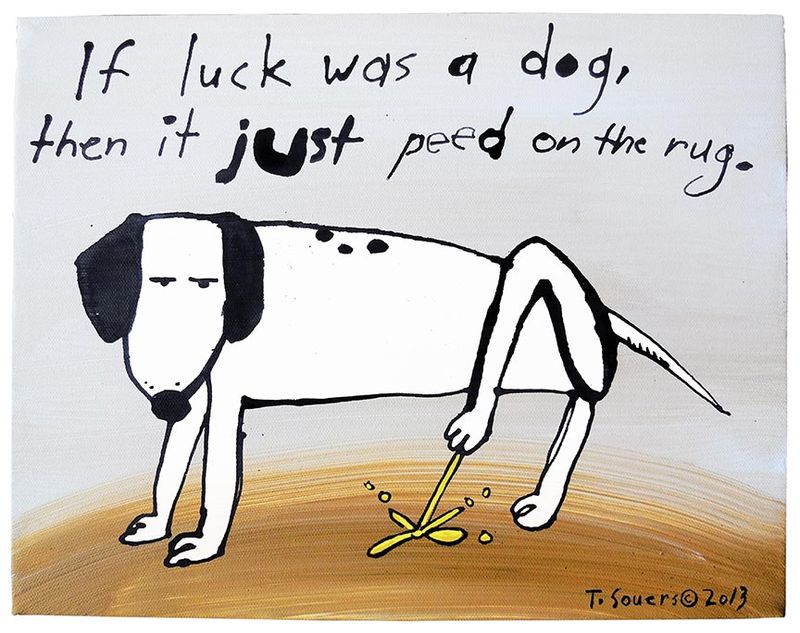 Well, it seems that for the most part the Cubs' conversation has turned from goats to stats, which most people associate with numbers.
But even I've learned that luck is buried into stats just like it is in everything.
BABIP (Batting Average on Balls In Play as defined by the guys at FanGraphs) is a cool stat, because it sort of makes luck official.

Here's an article about the Anthony Rizzo for Andrew Cashner trade.
Despite the 3 Ks last night, you've seen Rizzo smack the ball around quite a bit this season, but lots of his shots go right at somebody (like the other day's post with the one-hopper to Lucroy).
The article points out that Rizzo is probably suffering from a case of bad luck.
Conversely, here's what Brewers manager Ron Roenicke said about Tyler Thornburg, the recently called up pitcher who sucked in AAA but was lucky enough to get a start against the Cubs:
"He has been good in relief, he's been really good as a starter. It's hard to explain. I know it's an excuse, but I heard he had the worst luck you could have at Triple-A..."

How'd you like to be lucky Dale Sveum?
His contract runs out in 2015 (the Cubs have an option for '15), so he'll kinda be a lame duck next year unless they extend.
And because Theo Epstein avoided a question about Sveum's future, there are headlines out there like this: THEO EPSTEIN WON'T SAY WHETHER DALE SVEUM WILL BE BACK AS CUBS MANAGER!
So on top of all the crap Sveum's got to put up with, he'll get to answer those questions.

I could do a thousand things about luck, but I only have so much time, and really I just wanted to put that painting up.

But I'll leave you with this.
I got up at the crack of dawn this morning to go out and do my lame but better-than-nothin' walk/run around the park.
I always go in a big circle like a clock.
Always.
I come up an alley to get to the park like a T-intersection, and there's a guy right there going the way I wanna go.
What are the odds?
I mean... it's still night.
It's so early we MUST be the only people out.
I'd be either following him or him following me and both are creepy so I go the against the grain, counter clock.
Right when I'm half way - the farthest away from my house I'll get - the black sky dumps a thousand pounds of water on my head.
No drizzle to start, no warning at all.
It's pouring so thick I think I might drown.
I also think: it was bad luck going this way.
I turn around  and go the right way home.

But I didn't get struck by lightning.
Pretty lucky, eh? 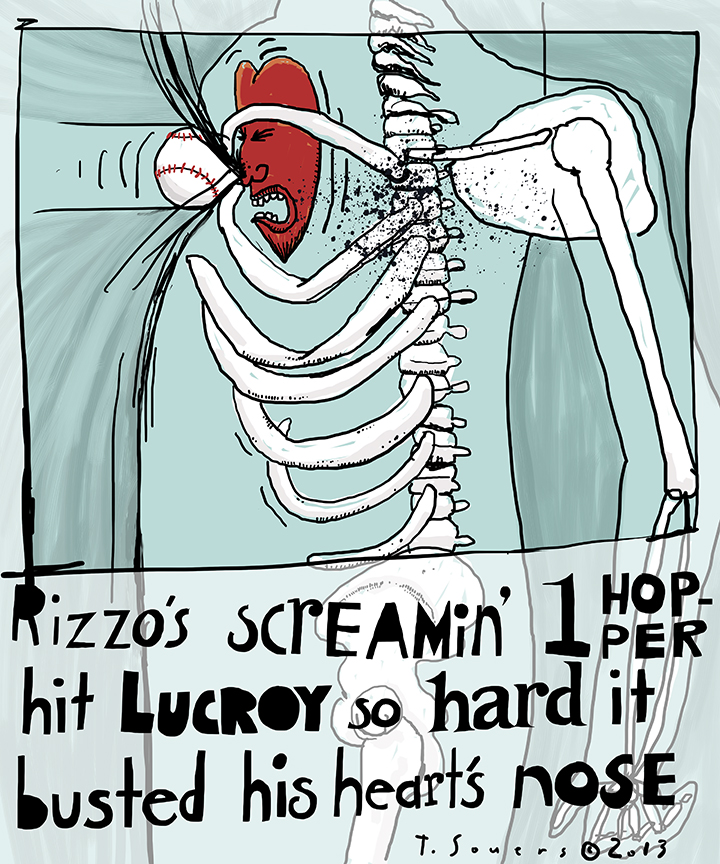 Jonathan Lucroy, at least from the point of view of Len and Jim, is a nice guy who normally plays catcher but volunteers to play first when the team needs him.
If you were watching last night in the 4th, Anthony Rizzo hit an absolutely on fire one-hopper that Lucroy wasn't prepared to field like a normal 1st basemen might.
Instead, he "blocked" it with his chest.
Like a catcher.
In the box score, it was just a ground out for Rizzo.
But I'm tellin' you, that grounder hit Lucroy so hard...
Sometimes when I'm watching our favorite baseball team, I take notes.
Because I have a blog.
And the piece of paper I have from last night says, "That ball hit Lucroy so hard it busted his heart's nose."
Which of course I had to draw.
Anyway, the score didn't turn out so good for the Cubs, who lost to the Brewers 1-6.
And I bet Lucroy has a humendous bruise in the middle of his chest.

I'm sorry I didn't get a chance to do anything for the Bears amazing, incredible, happy go lucky or not victory over the Vikings.
But I can tell you I watched it over at a buddy's house and we didn't say it exactly at the same time, but when Cutler completed the winning TD pass, it sounded like this (I'M ALL CAPS, brad is lower case):
I GOT i GOOSEBUMPS got goosebumps!"
You can imagine those words were pretty loud.

Protest in Pittsburgh. Over Anthony Rizzo's homer. Okay I made that up. (gif)

That was one mammoth home run from Anthony Rizzo last night.
Out of the park and almost in the Allegheny.
Flew so high, I'm sure some people mistook it for something else.
The other thing that was cool about it was it was good for 2 runs and the lead vs the either tied-for-first or in-first place Pittsburgh Pirates.
And the Cubs continue to spoil on the road with the 5-4 win.
Jake Arrieta, I thought he looked okay til he got whacked in the 4th with 3 straight homers including an in-the-parker.
Then they left him in for the 5th and nothing happened, still tied.
In the 6th in comes Brooks Raley and a silly muff on a Rizzo to Raley throw allows McCutcheon to score from 3rd, and now the Cubs are down.
But in the 7th came the Rizzo dinger with Luis Valbuena on first after a nice walk and the Cubs take the lead for good.
Shweet.

So the hub bub about drones will only get more interesting as time goes by.
Pretty soon everybody will be able to buy them and they'll be the size of little bugs and look exactly like them. You'll be able to catch your neighbor's dog crapping on your lawn from the comfort of your office while that fly buzzing overhead is actually your boss watching you screw off at work spying.
They're already here, it's just not public knowledge.
Don't tell ANYONE this, but Theo's been using 'em since he came here.
Want proof?
C.J. Edwards.
BAM!
You know those seagulls at Wrigley?
Sign-stealing drones.
You think I'm joking?

Chris Rusin is C RUSIN. At least on the box score. 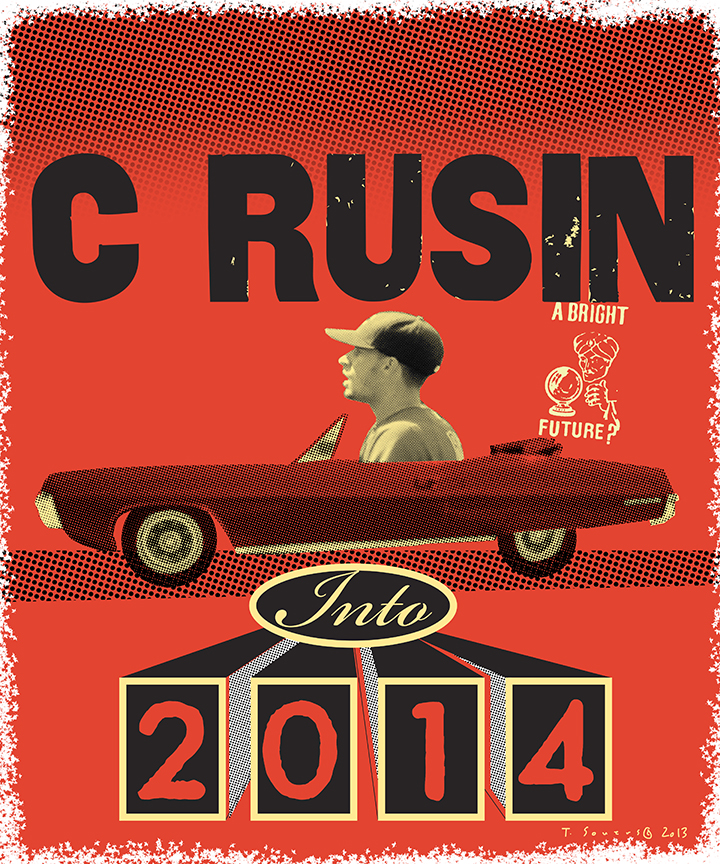 Well he didn't win last night, but Chris Rusin has been doing pretty good since he got called up.
Which has actually been since late July (feels like he only just got here) - remember the nice win against the Cards on Aug 9?
He's 2-4 with a 2.85 ERA in 2013.
Last night he went 7 innings with 4 hits and 2 runs against what's supposed to be a lefty-bashing Pirates lineup.
And Mr. Sveum says maybe he's pitching himself into the possibility of 2014.
KInda unexpectedly cool.

And I saw in the box that his name is "C RUSIN".
Pretty sure that had to be some kind of nickname for this kid growing up, right? 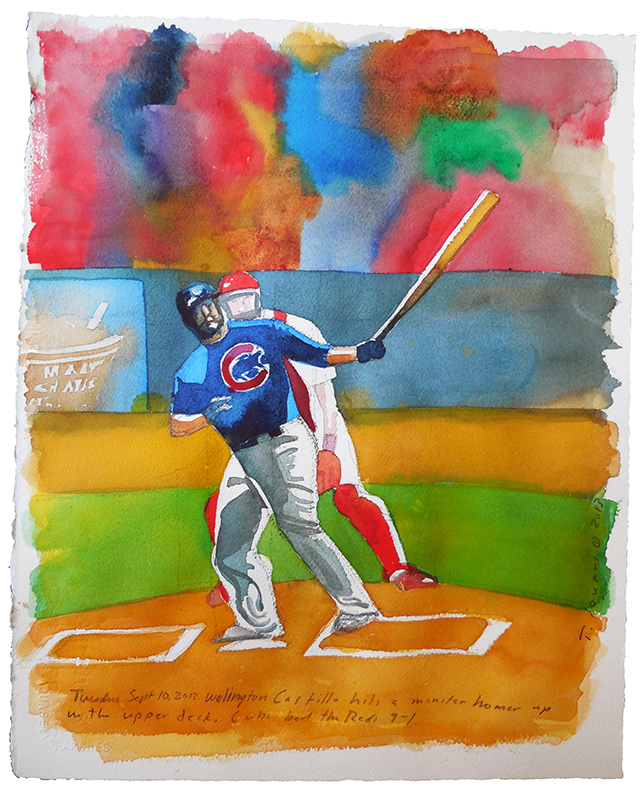 There was a moment, right after Welington Castillo hit his 2nd inning homer, that it appeared he couldn't believe he hit it that far.
I mean, it took about a second to know it was loooooong gone, and Castillo kinda stumbled with his first step towards first. Not a prima donna move at all. It lacked experience. Almost like a double take rather than admiration.
Enormous home run into the upper deck, and 2 runs score because Junior Lake led off with a double.
If you were a fortune teller you coulda told everybody to go on home because that was all the Cubs needed since the Reds could only come up with one meaningless run late in the game when the Cubs were up 9 to nothin'.
Edwin Jackson was fabulous on the mound and hit one out himself.

This is the Reds, man.
They're in the playoffs.
This was so much fun to watch.
Reds starting pitcher Tony Cingrani had to leave early with a back thing, which made for lots of extra guys playing.
Really, the final score was 24 Reds 1, 12 Cubs 9.

And tonight is... well the other day I was watching and Len said something like, "And Wednesday we'll see Samardzija leak."
Umm..that's not what we'll see though.
It's Samardzija vs. Mike Leake.