« I wonder if Alfonso Soriano regrets allowing the trade to the Yankees? (cartoon) | Main | Starlin Castro needs to get his head in the game. (acrylics, cartoon) »

The day I saved Rick Sutcliffe from an elevator. (cartoon) 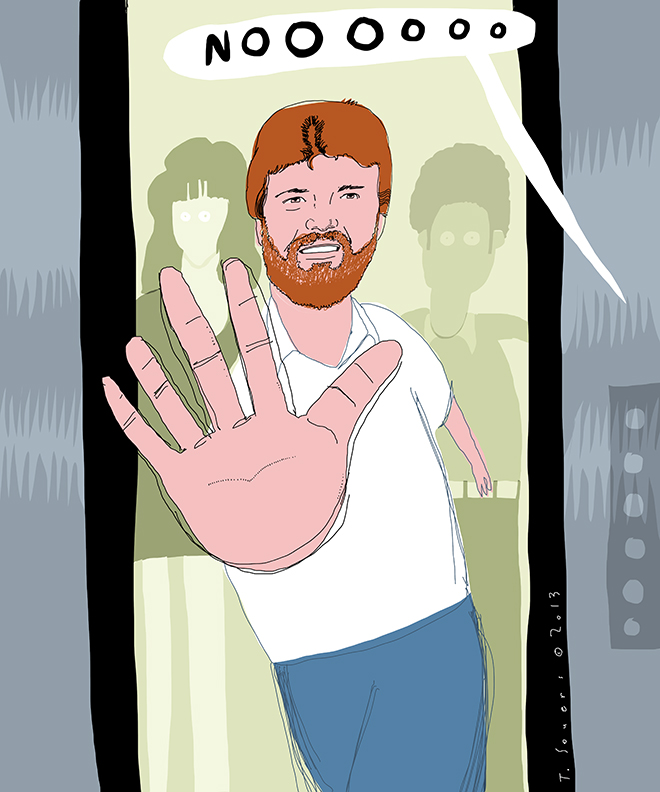 This is a true story.
But it's kind of ruined since you already know what happens with the drawing and the headline. I really just wanted to do anything other than talk about the Cubs getting swept again or A Rod so... here goes.
It's 1986. Rick Sutcliffe won a Cy Young just 2 years before. I'd taken a job at Leo Burnett which at the time was in the old Prudential Building. I had some friends there already, and they helped show me the ropes early on.
One thing was this: "Watch out because the elevator doors slam shut."
(any Burnetters from back then - you can back me up on this)
You know that "radar" that elevators have so that if you're halfway in and the doors start to close, they sense you and open back up?
These elevators didn't always do that.
And once you saw it happen it was scary enough to give you serious pause.
If you arrived and saw that the elevator doors were already open and there was a group of people in there, well, you missed your window and you did NOT try to get on.
Also, it was a tall building.
You got in the elevator that would stop at your group of floors.
For instance if it stopped at floors 41 thru 50 and you were on floor 50, you had to stop at all 9 floors before 50 to let people off and it took for EVER.
That was my situation, and it was the worst.
The solution was to go up in the elevators at odd times when giant crowds wouldn't be waiting for the elevators.

On this particular day I chose the late option.
I get on the elevator with only a couple people and push my floor.
Dum de dum, just waiting to go up.

And here comes Rick Sutcliffe.
Walking towards the elevator.
As random and weird as anything you'd ever see.
The Big Good Lookin' Redhead, as Harry used to say, in MY building!
I am dumbstruck thinking what the hell would Rick Sutcliffe be doing at the Prudential Building when suddenly he rushes forward to stop the elevator and puts his freaking pitching arm in the lethal death trap space between the doors and I screamed, "NOOOOO!" and he pulls back just as the doors shut.

Now I can't remember exactly but during the ride up, probably somebody said, "That was Rick SUTcliffe!" And a couple seconds later I would have said, "Man!"
I won't take credit for any of his wins after that, even though... well, I don't want to think about what might have happened.
I did see him in the stands at a Bulls game later that year.
He was signing some autographs and I thought... I could go over and introduce myself as the yelling guy in the elevator, but I didn't.
However...
HEY RICK!
You out there?
If you read this, that was me.

A couple of years after the Cy Young?? Wasn't that about when he started doing a 5K walk around the mound for charity after every pitch because it took that long for his arm to stop hurting?

Are you sure his having to suddenly yank his arm back did not cause a muscle pull?

Good story! I wish you had gone over and introduced yourself while the memory was still fresh for him. That could have been a fun and/or interesting encounter.

2. Ryno finally gets his managing gig (albeit with the Phillies)!

A bad day for Charlie Manuel, though. I guess winning 5 consecutive division titles and a World Series in 9 years was not good enough?

Good luck, Ryno...we'll see you in the playoffs one day!

BTW, this is not the first time (or the last) that a successful 69 year-old gets canned and replaced by a hot prospect who's 15 years younger!

Hi Rich!
Yeah, he was never one to speed up the pace of a game, was he?
And honestly, had I said anything to him he probably would have said, "What are you talking about?"

Yeah, I'm shocked at the Manuel firing.
Just an odd time during a season to do that.
Lets see if the Cubs can win this series today, though.
That would truly make my weekend.