Remember how Aramis Ramirez used to swing?
I mean...aych ay are dee.
That guy blew out a shoulder fielding a grounder - I have no idea how he didn't do something worse while swinging a bat.
And now Junior Lake.
I mean, he hasn't actually hurt himself or anything, but every time I watch him swing I think he's gonna come apart, which inspired this art here.
Yesterday he struck out twice and went 0 for 5.
He's been around long enough now for teams to figure the holes in the swing, so it's that adjustment thing he's got to work on.

I don't know if you heard, but Ryne Sandberg was managing the other team yesterday, and his team was losing nothin' to five.
Like half way to the slaughter rule.
But that crafty Ryno - he knows a thing or two about coming back.
Cubs lose it in the 9th when Kevin Gregg gives up the winner on a single to 36 year old leadoff hitter Michael Young, who had 3 other hits including a double.
Odd but totally cool seeing Sandberg managing a big league game, even if it's the Phillies.

The Pirates beat the Cards 5 to nothin and now they're tied at 78-56 with the Reds 3 1/2 back.
It'll be so refreshing if the Pirates can keep it up.

And finally, the Northern Arizona Lumberjacks lost to the AZ Wildcats in Tuscon 35 - zip, so everything stays normal in Flagstaff.

Ryno returns. I think it's like part 2 in a Greek Tragedy or like Star Wars or something. 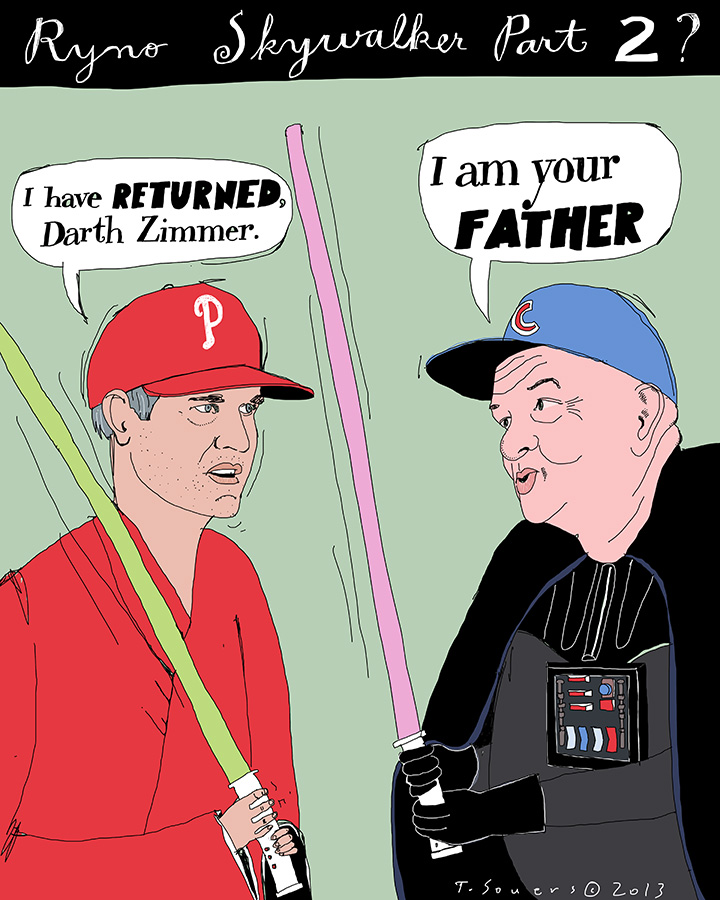 Obviously, I have more research to do.
This started off as a thought about the return of the prodigious son.
But I got sidetracked by Star Wars and is that actually a tragedy or not.
A tragedy has to have a good guy lead character with some kind of flaw that he must overcome.
Does that sound like a Hall of Fame 2nd baseman who's been rejected by his team?
Well, kinda.
And I just liked Zim as his dad for some reason.

Anyway, if you think about the life and times of my favorite Cub of all time, Ryne Sandberg, I think we're in about Part 2, or Act 2 or something.
You all know I was totally against having Ryno come be the manager of the Cubs, because I think Cub Fans can be some of the meanest people on the planet, and I didn't want to hear any unfair boos at Wrigley directed at him while he learned his craft directing a horrible roster.
Let these new guys fix the team first.
Let Ryno gain experience at different places.
Then maybe if the stars align perfectly at some point in the future, we can have Act 3, where the Hero comes home to lead rather than be the enemy manager.

It's been seriously busy, and I gots to run.
But I'm getting all excited about the Bears.
If the rookies in the O Line actually work out, even if they don't win, I'll be the happiest man in town.
Also, the Northern Arizona Lumberjacks are taking on the Arizona Wildcats tonight in Tucson.
I'm pretty sure they've never beaten them, but you know there's always a first time.
GO JACKS!

Cubs 3 Dodgers 2. Travis Wood is good at everything. (illustration) 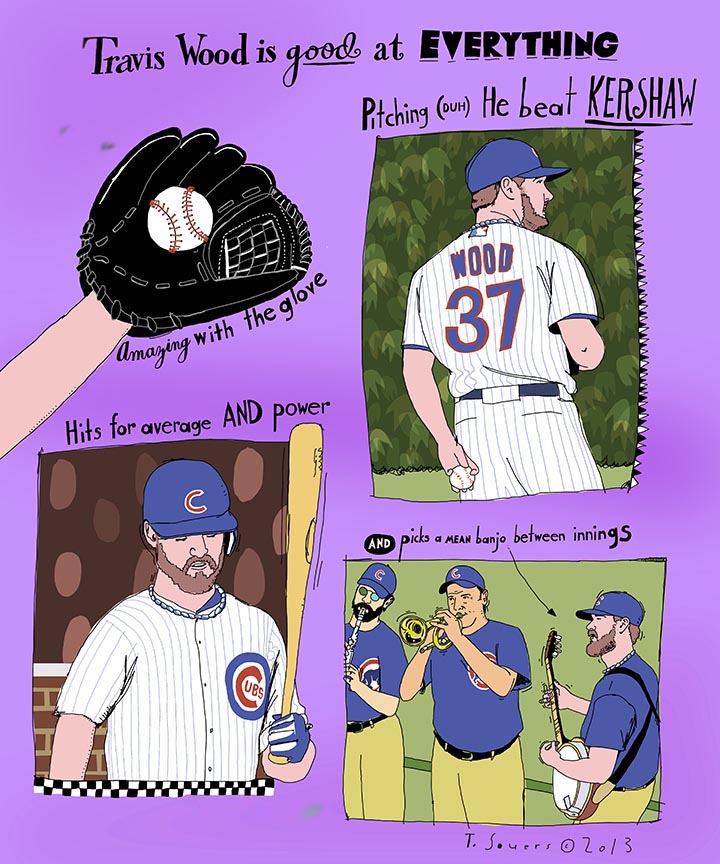 Did you stay up to watch?

Clayton Kershaw and the unstoppable Dodgers against Travis Wood and the Cubs.

And the Cubs WIN 3-2?
This is why people play the lottery.
Didn't you know Kershaw's having a season that will become historically important, Cubs?

Plus - top of the 3rd with Travis Wood leading off.
It's the best pitcher in baseball facing a pitcher.
The pitcher singles.
The pitcher moves to second when Dodger catcher A.J. Ellis interferes with Barney.
Then Dioner Navarro hits one and the pitcher scores from second.

The guys at Vineline asked me to do an illustration about Travis Wood being good at everything.
Last night was a perfect example of why.
Does he play banjo?
I don't know.
But I'm pretty sure that guy can play anything he wants to and beat you pretty good too.

I played golf one time with this guy Brian Sweeney.
He was the younger brother of ex-pinch hitting specialist Mark Sweeney  (he played for about 10 Major League teams including the Cardinals and Dodgers).
So Sweeney is kind of a jock, played WR in college I think, and he takes sports seriously.
He tees off.
Duff.
Ball goes in the trees and not very far.
Club goes flying as Sweeney yells, "I HATE WHEN I'M NOT AN ATHLETE!"
EL MY A OFF.
But anyway, I don't think Travis has had to yell that very often. 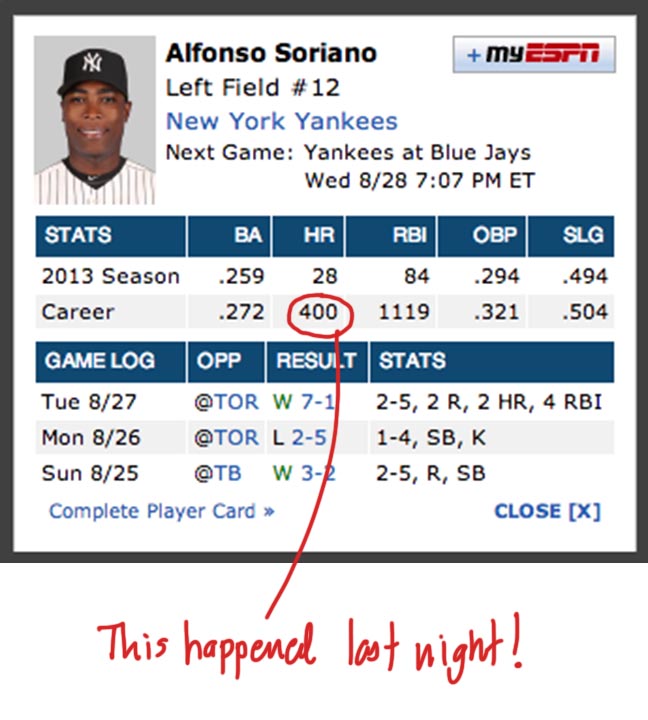 Ronny Cedeno's ineptitude was a Cub killer when he was a Cub and now when he's a Padre. 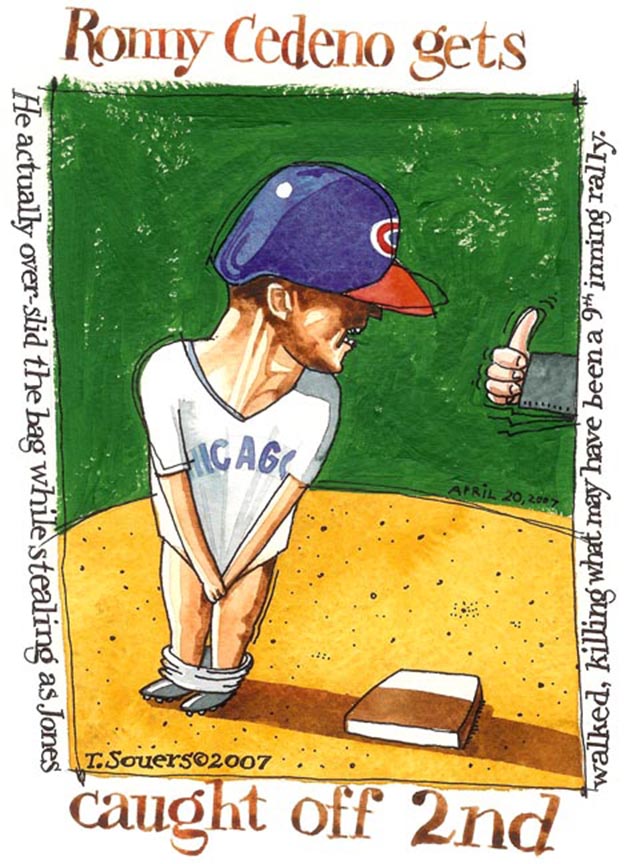 I found this old painting from 2007 on the blog, where Ronny Cedeno decided to steal second on the same pitch that Jacque Jones walked, but Cedeno idiotically overslid second and was called out.
Killing a potential rally.
Last night with 2 outs and the Cubs up by 1 in the 13th inning and Ronny on 3rd, Kevin Gregg throws a pitch a foot in front of the bag that gets away from Castillo who can't find it and Cedeno runs.
HA!
I'm so happy.
Castillo throws home and Cedeno is out by a freaking  mile.
But Kevin Gregg apparently can't bend at the waist and the ball goes between his legs rather than in his glove and misguided baserunner Cedeno crosses the plate.
He's a Cub Killer no matter what team he's on.
I turned off the tube.
Later I got an alert saying the Cubs had lost.

All that came after a really good duel between Andrew Cashner and Chris Rusin.

And now it's on to Los Angeles, where the 75-loss Cubs will play the 76-win Dodgers.
I promise I will be in bed by the 4th.

Remember before Theo was here?
Hope all pinned on the 3 Cs - Colvin/Castro/Cashner?
The Cubs had Kosuke Fukudome and Carlos Pena, Doug Davis and Ramon Ortiz.
Mike Quade.
Koyie.
The giant empty promise of a heavily promoted, ridiculous Cubs/Red Sox series where we watched the Cubs give up 15 runs on National TV complete with Kevin Youkilis making a comet out of a Scott Maine pitch.
I tried to make a friendly bet with a bartender and after that homer he said, "Put your money where your liver is."
In August people saying the always hilarious "wait til next year," and my response was "What are you even talking about?"

IT'S SO FUN NOW!
What if Baez comes up next year and Castro's found his bat and glove so Baez goes to third oh wait there's Olt if he clears up his tear duct he could be fantastic but don't forget Bryant cause that's a special bat you might not be able to hold him back but maybe he's in left or right either way probably Baez goes to short so Castro can go to second unless Alcantara becomes something else and maybe Castro or someone gets traded by a Cubs team dealing from strength (what?) with the "nice problem(s) to have" and I forgot about Christian Villanueva at third and that's not even mentioning the outfield or saying anything derogatory about Barney.

There's a new kind of hope that's based on guys like Baez rather than ohhhh... say a line drive bouncing off Lee Smith's back.
Kinda nice.

Also kinda nice last night with Jeff Samardzija continuing to whoop, going 8 innings at 106 pitches with 7 K's and only giving up 2 hits and runs.
Cubs 3 Padres 2.
This afternoon it's Chris Rusin v Andrew Cashner, the guy we got Anthony Rizzo for.
Gotta watch!

Donnie Murphy is serving up Irish Breakfast with BANGERS. 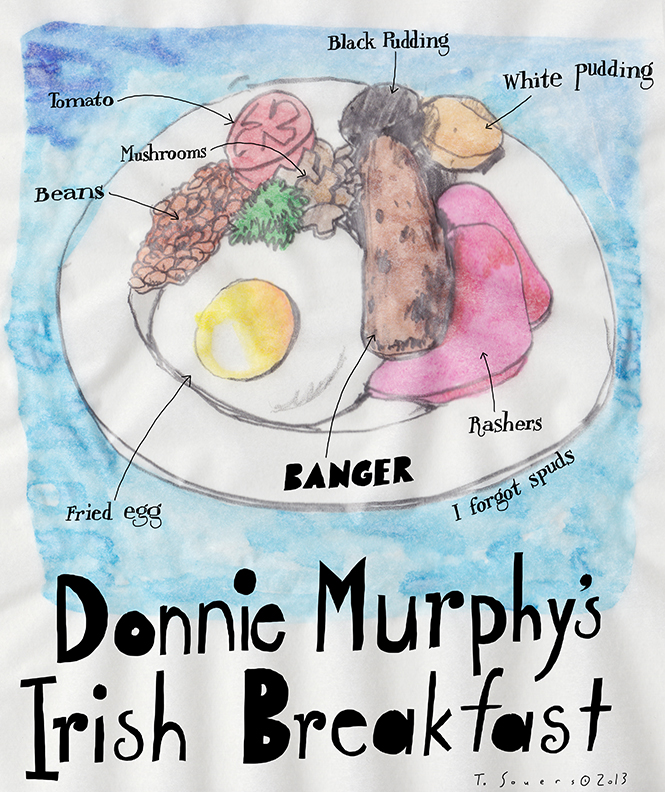 With Junior Lake on 2nd and the Cubs down by two with two out in the bottom of the 9th, Donnie Murphy stepped up to the plate and served up some traditional Irish Breakfast.
With a big banger on the side.
He hit Stephen Strasburg's 112th pitch into the bleachers and tied the game.
I know... you usually think of bangers as a British thing, but not so fast.
Yeah, I know the Cubs eventually lost, but Murphy's story has been impossibly cool since coming to the Cubs just 16 games ago.
He's hit 8 bangers in that time.
Here are his numbers from ESPN (Murphy still appears with a Marlins hat on the site).

He's living in the best baseball dream he's ever had in his life.
I mean, he's got stories to tell for the rest of his life based on just these 16 games.
And this one, the classic bottom of the 9th story against one of the elite pitchers in the game is just fantastic.

People are noticing.
I don't believe it long term at all, but hell man you never know.
Do you think Darwin Barney is here long term?
I don't.
His OPS is moving the wrong way and while he's a brilliant fielder you gotta have someone who can hit there.
There are a ton of scenarios for what can happen with this Cubs infield in the next couple years.
Who knows, maybe we'll be seeing more bangers served up at Wrigley...

You've had an Irish Breakfast, right?
There's a greasy spoon near me called Lucky's on Milwuakee that has one, and if I'm feeling inspired on a Sunday morning there is nothing better.
The black pudding is... it takes getting used to.
It's blood sausage so you know, pretty weird.
Dose it heavily with some HP sauce and you're good to go.

You notice I didn't say anything about the rest of the game?
That's because the Cubs lost 4-5 in 13, but whatever - the Banger is more fun to talk about.

Cubs in San Diego tonight, so I plan on an inning or two and see if there's a nice surprise in the paper Saturday morning.