Starlin Castro learns that a win is like a delicate flower.

I'm talking about game 2 of the Cubs v Brewers doubleheader yesterday, of course.
2 outs top of the 9th Cubs up by one Kevin Gregg on the mound and you know what?
I turned it off.
It's busy and I need some sleep.
So I'm like half way up the stairs when I get a text from Cousin Gurke.
"How the MFing hell does he not catch that effing ball?"
And it takes all the wind out of me.
I go back and turn on the tv in time to see a replay, as Starlin Castro drops the liner.
Now I hope that the entire Cubs Nation doesn't come down on young Starlin.
Yeah, he's been the starting shortstop for long enough for us to have certain expectations, but he's still just a kid.
He's learning still.
What did Starlin learn last night?
That you can not lose your concentration even for one second until the last out is made.

You know why those Giants games were SO awesome?
It's not that the Cubs won, it's that they won one-run games.
Don't they seem like the rarest for our favorite team?
It was like beautiful flowers were growing in the yard, and the giant mean lawn mower decided to mow around the precious, fragile things.

Ah well, maybe in the years to come, as Cub wins actually become more important, Mr. Castro will remember the lesson of the delicate flower illustrated here at Cubby Blue.

Have you noticed that it's foggy and crappy and raining out?
My fault, sorry.
Why?
Because I bought tickets for tonight's game... 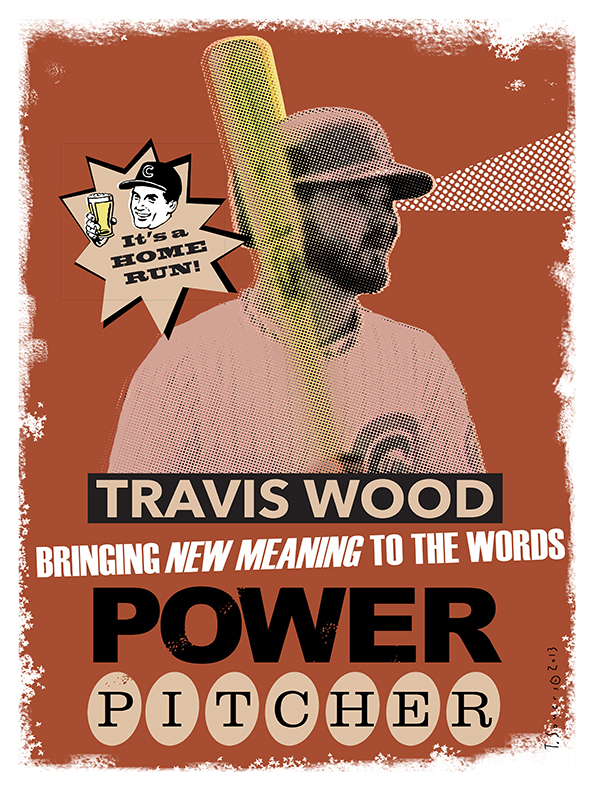 Yeah, I know.
Is Travis Wood a mirage?
Can he keep this up for his whole career?
How about I don't care.
This guy has been nothin' but fun to watch pretty much all year, and after yesterday... well, some day he'll be able to say to his grand kids he hit a homer off Tim Lincecum.
During the Great Rebuild, there have been pockets of baseball action and some new players that allow me to not think about the how-long-til-the-Cubs-can-contend thing and just enjoy.
And at the very bottom of it all, that's what summer is for.
Okay, and maybe a frosty cold one.
The Cubs sweep the Giants with back to back to back one-run wins.
Doesn't really mean anything, but man was that fun.

ps: I know 3 homers isn't really THAT many for a pitcher. Big Z hit 6 in '06. But still, kinda fun to do that illustration. 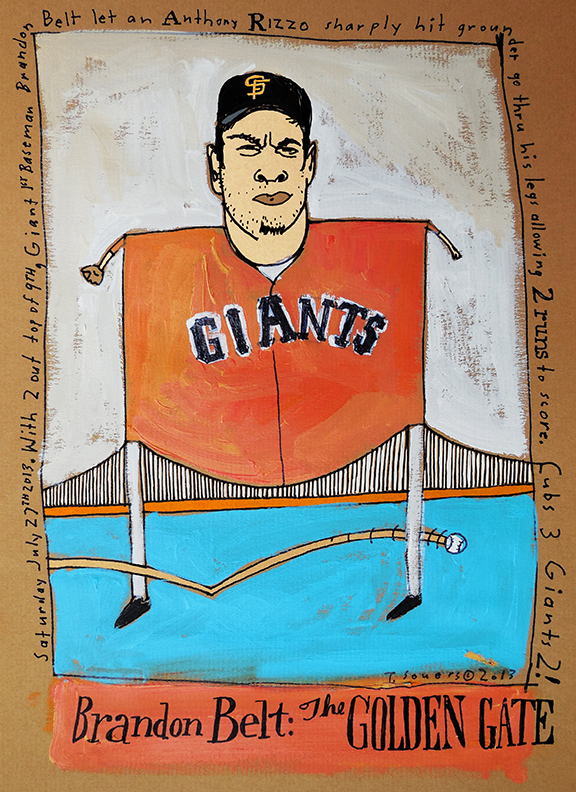 I CAN'T BELIEVE THIS HAPPENED MAYBE 10 minutes after I called it a night.
Cubs are down a run going into the 9th, the Giants have Sergio Romo coming in.
In my head, that guy doesn't lose.
So I went to bed.
But what happens is Borbon singles and Dioner Navarro walks.
DeJesus strikes out.
Junior Lake fielder's choices so he ends up on first and Borbon is on 3rd.
And young Anthony Rizzo comes up and smacks a grounder thru the legs of Giants 1st Baseman Brandon Belt who was damn near playing in right field.
2 runs score, Kevin Gregg comes in and gets the save.
(BTW - did you know Sergio and Kevin Gregg have pretty close numbers this year? Gregg's got twice as many walks and 10 less strikeouts, but it'll be interesting to see what the Cubs can get for Gregg once he's traded...)

Cubs 3 Giants 2 and now I'm kicking myself for missing it.

Tonight will be 26 yr old Cub Chris Rusin and his 2013 total of 8.1 innings pitched v Madison Baumgarner and his 10 wins and 2.5 WAR.
Tomorrow at 3 is Travis Wood v recent no-hitter guy Tim Lincecum.
Lincecum threw about 148 pitches in that game, and only 78 in his last start so... I don't know man. You're the manager and a guy is throwing a no-hitter but 150 pitches? That's too many pitches.

You probably heard that Alfonso Soriano went 0 for 5 last night.
But C.C. Sabathia gave up 6 in the 2nd, and 7 runs in his 3rd straight start.
Alfonso didn't lose that game...

Hey, did you know it was almost August?
Wasn't the 4th of July just last week?
This summer is flying by like crazy.
Time to plan a barbecue during Cubs Hours real soon...

Alfonso Soriano is a Yankee, so here's a Cubs illustrated retrospective.

He headed to NY on a red eye last night, because he's going to be a Yankee tonight.
Good for Alfonso Soriano, good for the Cubs and we hope good for the Yankees.
I still don't really get why he didn't go to the Giants last year, but whatever.
Anyway, he's a Yankee now so here's a bunch of art, cartoons and gifs of Soriano from over the years in no particular order.

This gif sort of gives a timeline for Alfonso's popularity in Chicago.

He was a streaky-hot hitter, and I did lots of things about his bat.
This one was about him getting "The Hits", which sounds like a common stomach disorder and caused many a hilarious comment. 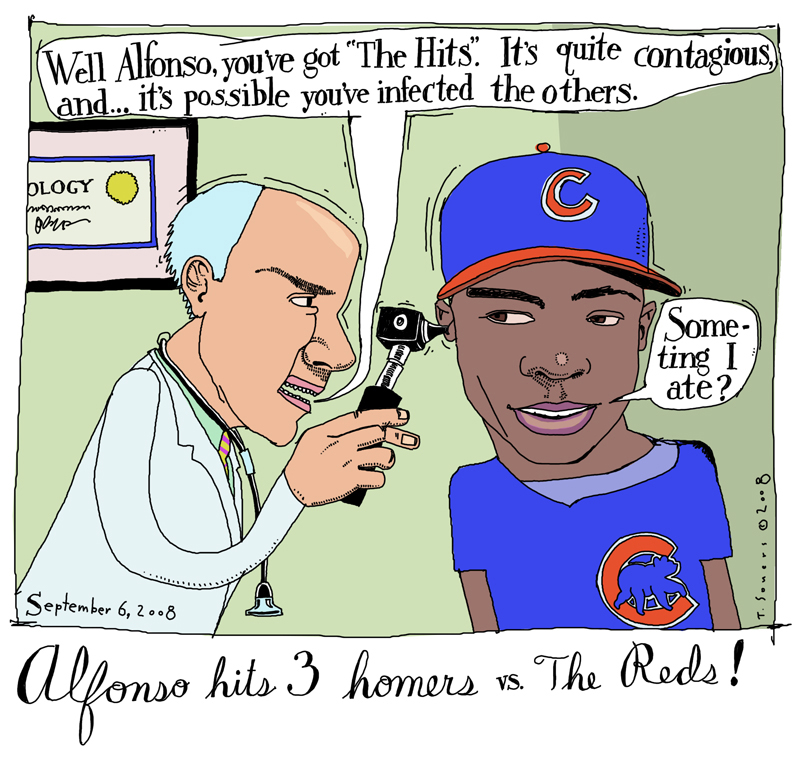 Here's another about him - how hot is Alfonso Soriano?

Remember that stupid hop he used to do? Like a defensive back making an interception and trying to catch the ball at it's highest point.
Just looked silly, and of course one time it led to an injury... 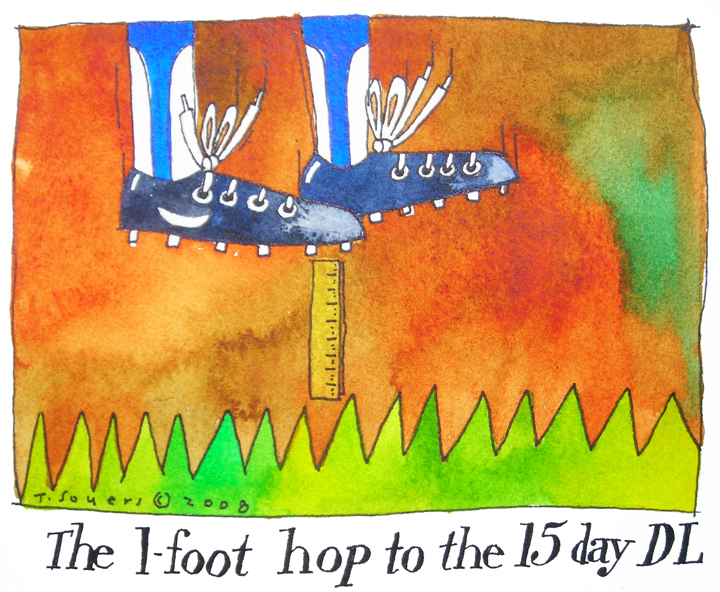 He did have a deceptively good arm - sort of lazy looking but if you ran on him, this would often be the result: 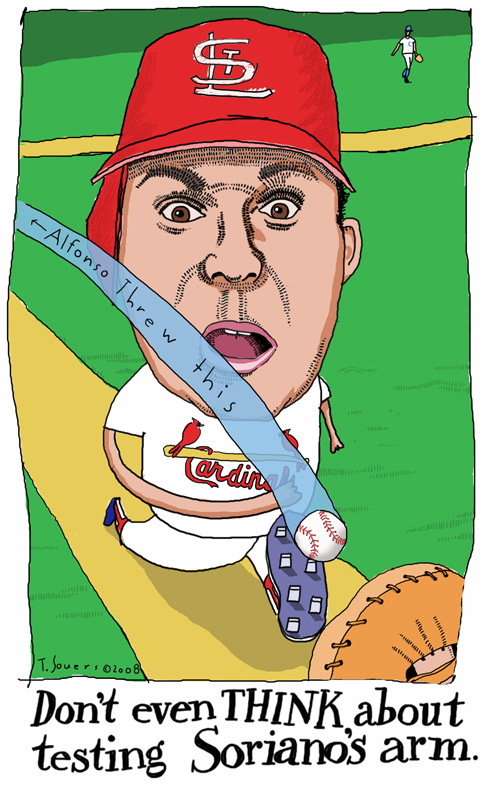 Then there was the issue of the glove.
For awhile he was about the worst outfielder I'd ever seen. 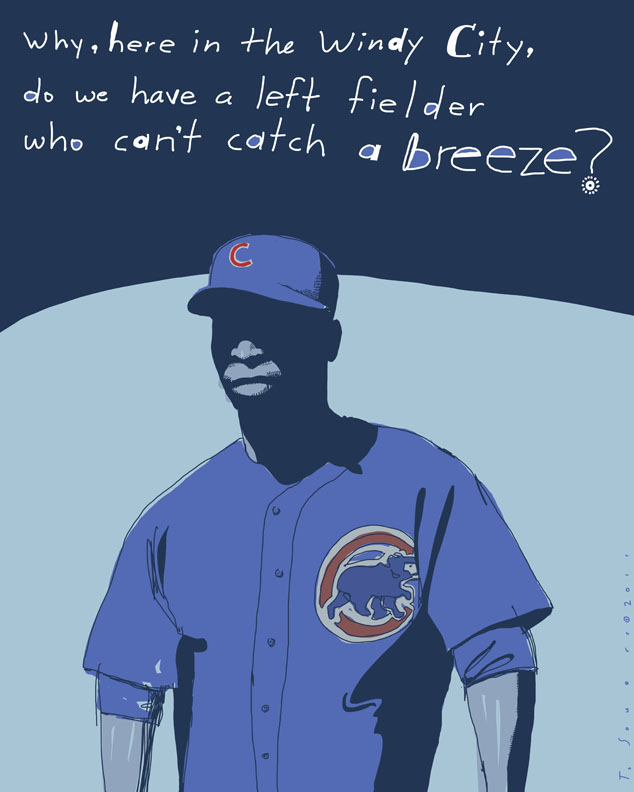 His bat was so much better than his glove, he really should have been a DH long ago. 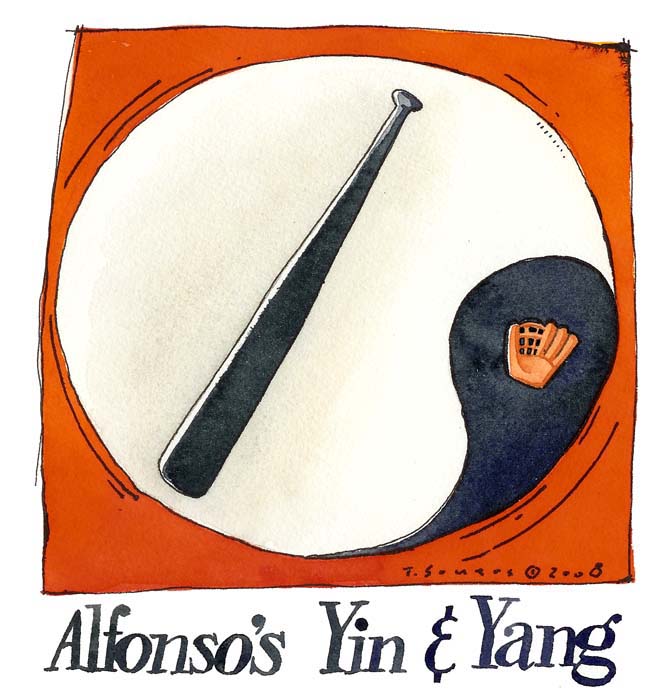 But something happened where he lost his fear of running into the wall. Seriously, it was like watching a whole other ballplayer. I mean, not spectacular, but like a billion times better than he was with the glove. 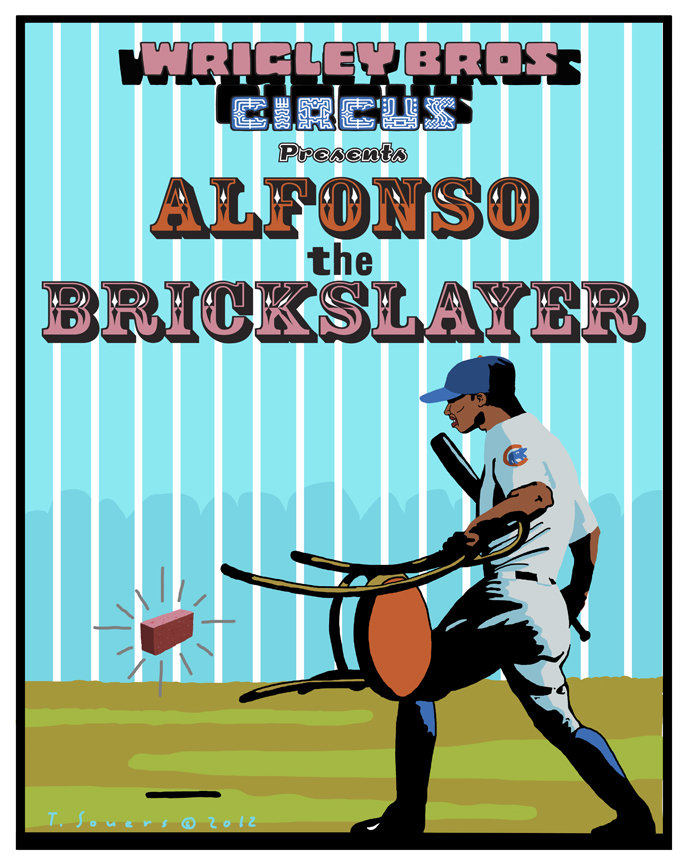 And while it seemed like, with such a long and expensive contract, he would NEVER get traded... 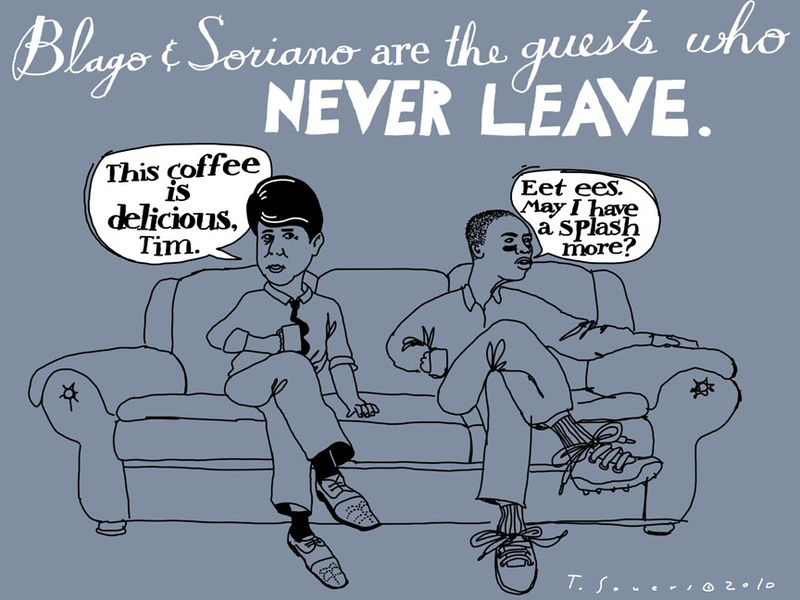 And I finally was able to switch my email service.
Supposedly it would happen smoothly, but I'm kind of an idiot as you well know.
Didn't go so well.
Like, you might have gotten an email from "blue" which sounds vaguely porn-like and it's possible you cancelled your subscription.
Sorry if that happened.
But the new service - when I post it'll email to you immediately rather than overnight.
Anyway, sorry about the inconvenience.

Alfonso Soriano has a chance to win a World Series, needs to think about it a couple days. 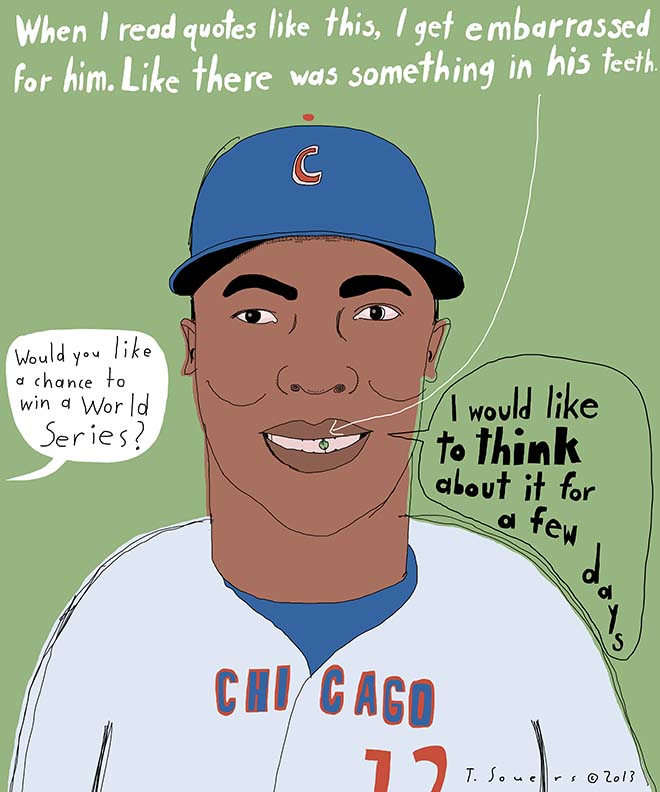 The popularity arc for Alfonso Soriano is actually like a smile.
Started off SUPER popular.
Then the Cubs didn't win and we all realized this guy couldn't start for most high school teams as a left fielder about the same time we realized just how long and expensive his contract would be.
His popularity went to an all-time low.
Then, he somehow learned to play in the outfield and became sort of a clubhouse leader type with the kids and his bat sort of stopped lurching out at the outside pitch in the dirt.
Popularity back up.

Last year, the Giants would have had him (everything I say about any team wanting him comes with the Cubs still paying most of his salary baggage), but he turned it down because of bad weather.
Now, apparently the Yankees want him.
They're in 4th place in the AL East, 7 games behind Boston.
They need a bat.
They're used to seeing lots of post season play.
And Alfonso did actually say, "I'm 37. I want one more chance to go to the World Series."
But I also read that he wants a couple days to mull it over.

Alfonso, everybody likes you again, but...
ARE YOU NUTS?
Get on a plane, go to New York and try to help the Yankees win a World Series.

The Cubs have kids they want to play and futures to plan, and sorry to say but you're (one of the) odd man out.

I hope he goes, I hope he does well, and gets a ring (although probably not this year).

It was Nate the Great Schierholtz night last night, with some great hitting as the Cubs pull out a 7-6 W over the Diamondbacks in 12 innings.
He drove in 5 with a homer and the winning double in the 12th, and today we find out the Pirates have had their eye on him for "more than a month".
He'll probably be gone soon too, and what a nice team to go to should it be the Pirates. 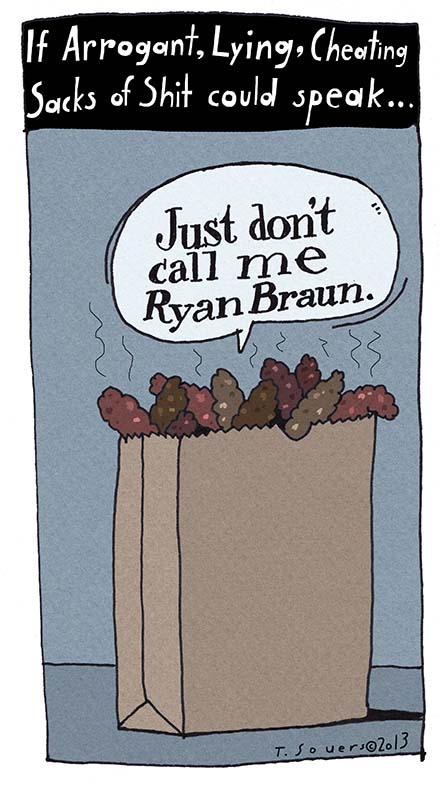 This idea came from frequent commenter Bud's comment from yesterday.
I mean, I guess I already kinda knew Ryan Braun was lying. So the amount of hate flying around especially from the top dog sports guys sort of took me by surprise.
But hell man, I'll happily pile on.
And I'm glad at the attitude of the clean players, that they're mad as you and me.
I've said it before, I still don't understand why this isn't a crime with police and jail and all that.
I mean, if you get millions of dollars under false pretenses, why isn't that simply called stealing?
And if Ryan Braun stole millions of dollars, why isn't he in handcuffs?
He's not who he claims to be.
It's like me going into a bank and saying, "Hi, my name is Rockefeller, and I'd like to take out a couple million dollars."

Okay, enough about Braun.
There's going to be lots more, and I hope none of them are Cubs.

Travis Wood shaved off his beard and got knocked around pretty good last night.
And then Hector Rondon and Michael Bowden gave up 3 each.
Just wait til Kevin Gregg goes, and then maybe even James Russell.
I mean, if you thought the bullpen was not a strong point, just wait for the rest of the season.
I don't believe there are any Junior Lake type guys (only relievers) in the system, so...
So watch Junior Lake instead, and forget about the final scores.
There will still be cool stuff to watch at Wrigley Field, so... concentrate on that, what's going on in the minors, what trades Theo and Jed make and lets just do our time together.
I also hope Alfonso Soriano goes to a contender and does something big. That matters.
It's so weird to say this but if you're an AL team and you need a DH, wouldn't it be smart to get one that you could also put in the outfield if needbe?