What every Cubs Fan was thinking as they watched the Blackhawks parade.

That was some kinda celebration, huh?
It looked like Lollapalooza from my office, and then Oif got it on his computer for the speech part and he goes, "Man, just think if this was the Cubs."
Oif, you have to understand, is a member of the deeply, deeply scarred.
The Double Deeplys.
When I first met him years and years ago, he told me he didn't like Ron Santo.
"How could you not like Ron Santo?" I asked.
And he thought for a minute and I could see he was struggling for an answer and finally blurted out, "BECAUSE HE RUINED MY LIFE!"
He was probably 6 in '69.
So when Oif gets wistful about the Cubs, it's a real kind of wistful.
Then he asked, "How many honest to God Blackhawk Fans you think there are in Chicago? Fifty? A Hundred thousand?"
No idea, I said.
"Can you even imagine what it would be like if the Cubs won the World Series?"

There was about a 2 day span in 2003 when I actually thought that might happen.
I felt this crazy joy, and if I'm completely honest with you I also felt a particular terror.
Like finding out your parents aren't your parents.
Or having that weird dream where I suddenly find myself on this long staircase and the sleeping devil in the grass suddenly wakes up and shoots me with his harpoon thing and now I'm falling..falling...

And I wake up with the tv on and the bases are loaded with Mariners and there's Shawn Camp giving up a single to somebody named Zunzio?
And the Cubs lose 4-5 and everything is back to normal.

Bird's Eye View of the Blackhawks Parade. Will update photos as day goes along.

I looked at the route of the Blackhawks Parade this morning, and realized it goes right in front of my building which is in the "O" of "RANDOLPH ST." 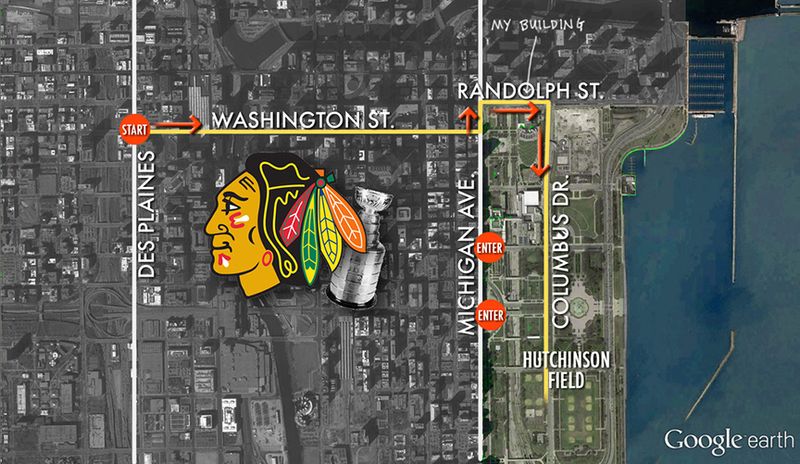 So out my window, they'll come out Washington and turn north on Michigan... 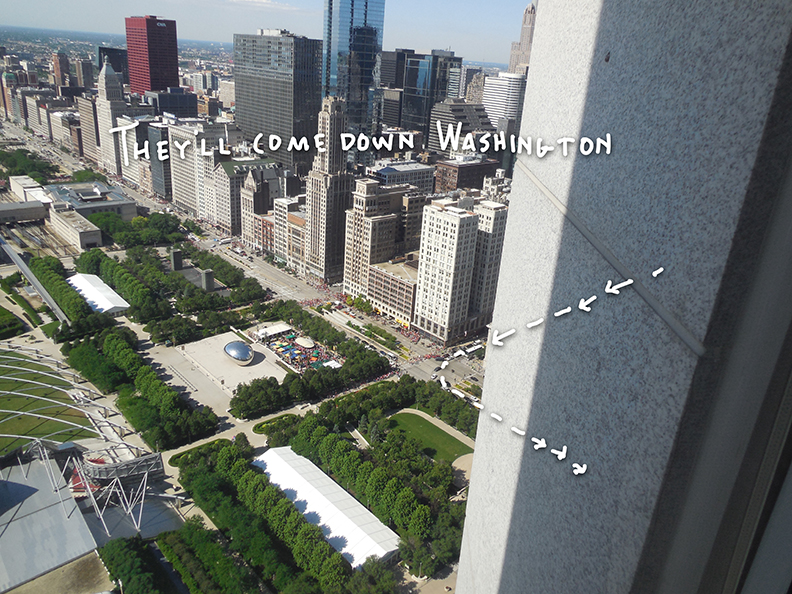 Then come right down Randolph and down that little ramp to Columbus. 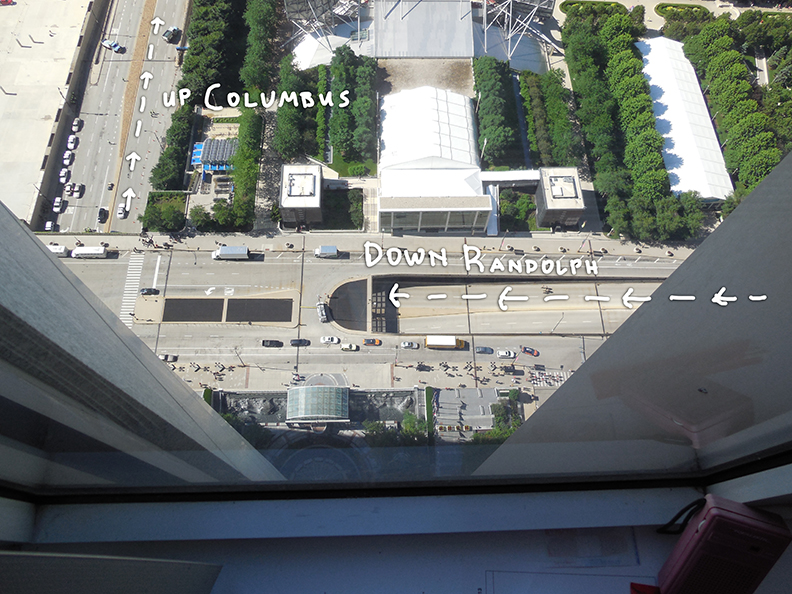 My neighbor Garry the Cop is one of these guys. He's a really nice guy so, you know, do what he asks. 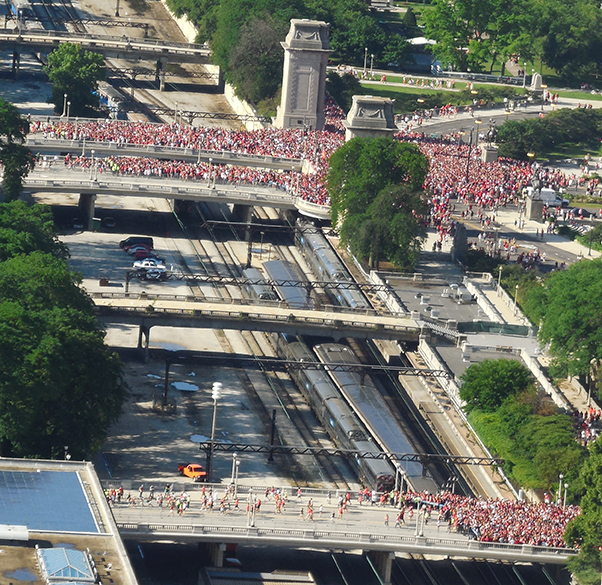 And now at 10:20 it looks like some weird Lollapalooza where you have to wear red: 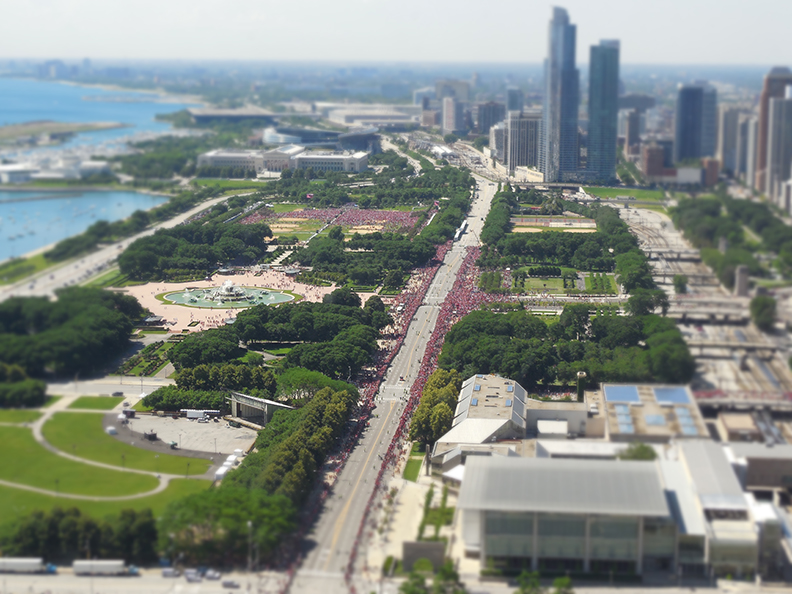 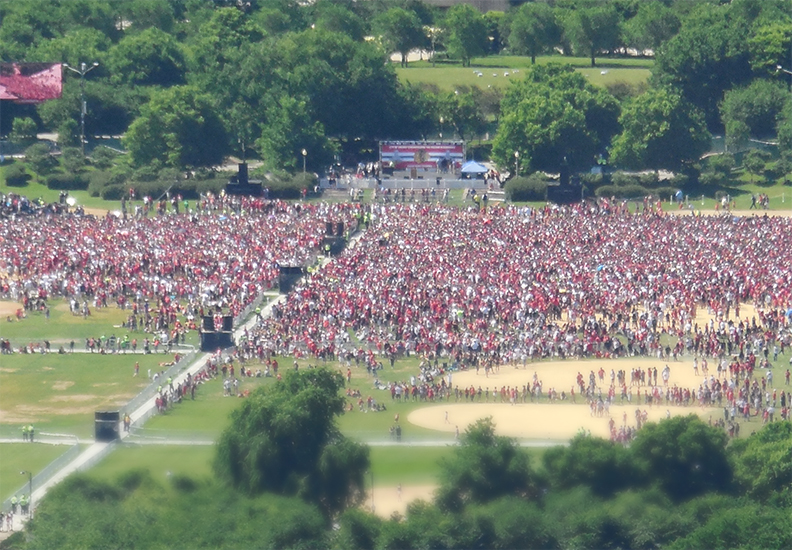 And... here they come!
The first bus has The Cup! 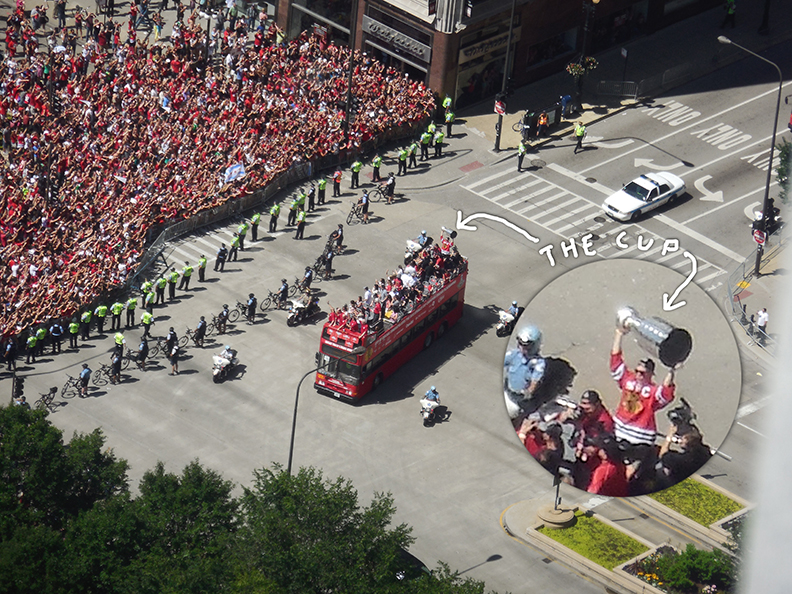 Is that Toews? Or Hossa?

So then I did the dumbest thing.
I grabbed a couple people and said, "Hey lets run out front and watch."
So we got in the elevator and by the time we got downstairs?
Everyone was leaving.
The whole parade had already gone by.
Remember last year when it was so unorganized and...drunk?
And therefore...more fun?
Not so much this year.
All planned to perfection (except for Corey Crawford's mouth, thank GOD!).

Anyway, ran back upstairs and there go the busses up Columbia. 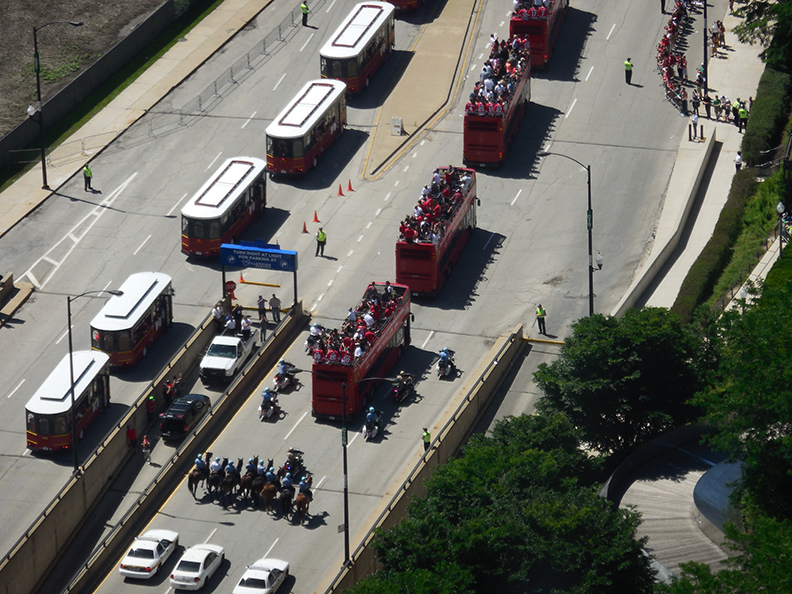 This is where I began to think that my vantage point wasn't so good unless you like wide shots of crowds, but there you go... 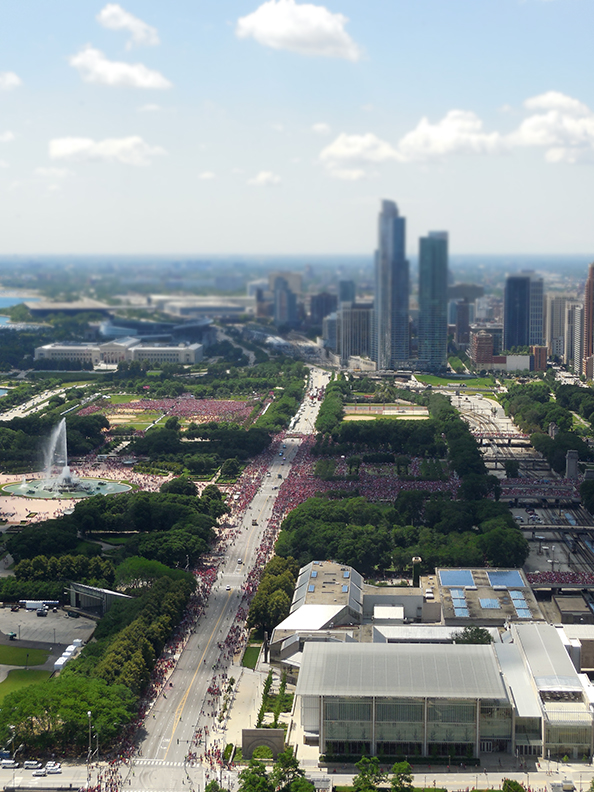 I am, given the state of Cubs pitching, still shocked that they DFA'd Carlos Marmol.
Not because he was doing the team anything but harm, but because...well, they brought up an outfielder to replace him, right?
They're going to trade pitchers come July.
Gregg, Garza... those are only two but imagine them gone?
Anyway, I'm not sad about Marmol or anything - absolutely the right thing to do but I expect nothing but misery as this summer progresses.
And that's fine, I guess, because the Cubs are going to win it all in a couple years, right?

So here are some Marmol illustrations.
Early on, he was amazing. 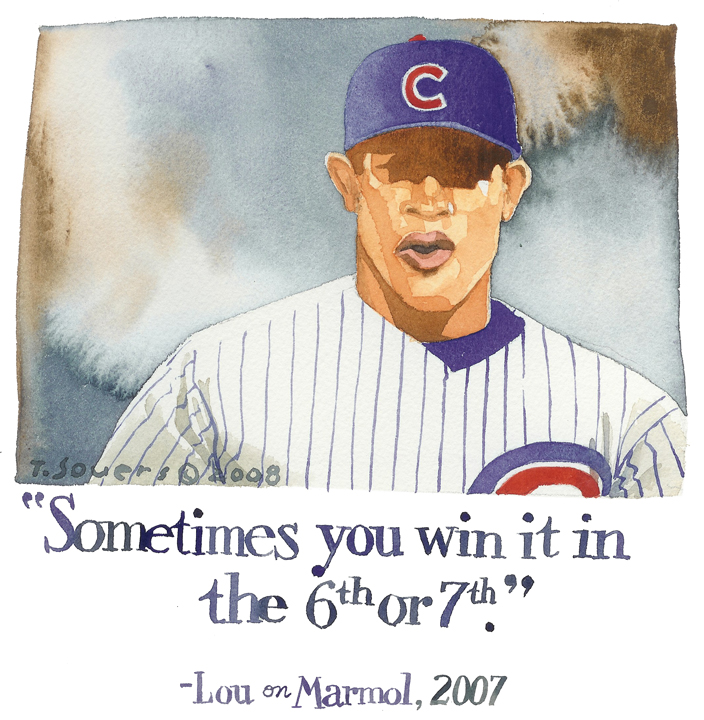 Then, we began to get this weird twitch when he came in...

He got the giant contract... 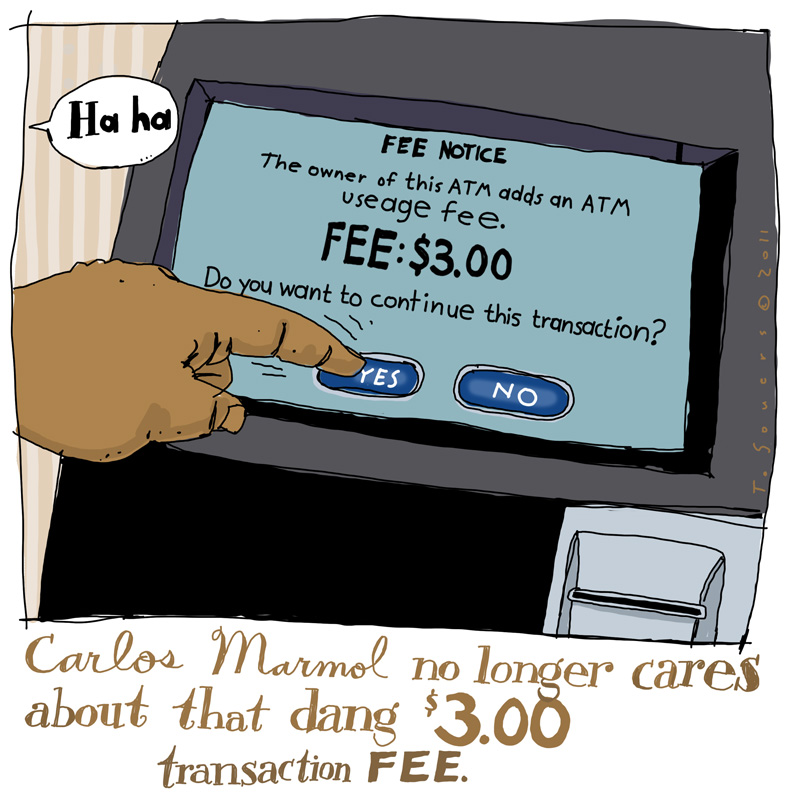 Remember when he first was really terrible as closer?

We thought he'd come out of it, but one thing was apparent... 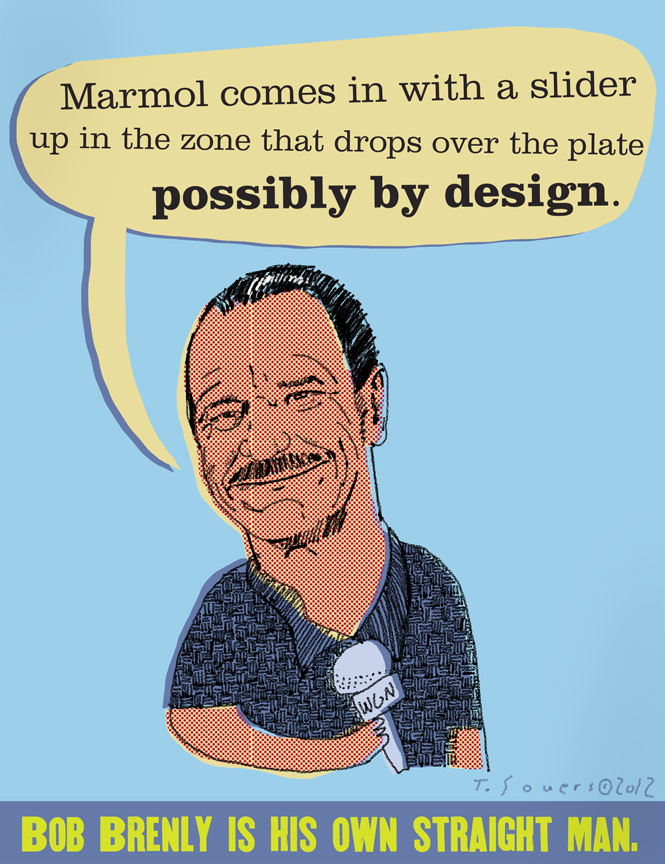 Finally it was unbearable. 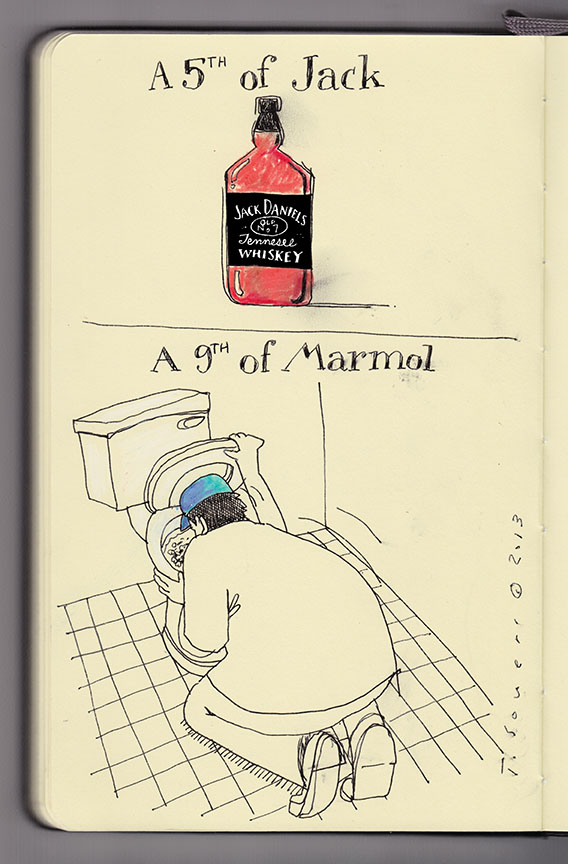 So... see ya around, Carlos.
I expect you to get picked up.

Andrew Shaw and the point blank puck to the face.

When I was growing up, we moved all over the place.
Air Force.
And every time I went to a new school there'd be a kid named Andrew, and every Andrew I ever met was ... bookish.
The opposite of tough.
Not an athlete.
But Andrew Shaw changed all that last night when he went down with the point blank puck to the face.
I thought he was dead.
When a guy falls in a heap like that and doesn't move...
They cut to a commercial really fast, my imaginaton was going crazy.
Surely there were emergency guys on the ice yelling GET BACK!
Ambulances and blood and stretchers and and a priest.
When the game came back on the announcers said something about hockey not being for the faint of heart.
Then they cut to that weird guy with the glasses on the sidelines and I'm totally prepared for him to say that Andrew has left us.
But instead he talks about the game.
Awhile later...here comes Andrew Shaw!
He's got a buncha stitches in the side of his face.
I totally figure it's a psych move - like "See Bruins - YOU CAN'T HURT US" and that he'd go skate around and then go sit down.
Obviously, I don't know hockey.
Guy plays the rest of the game like he didn't just almost die.
Except for when they kick him off for bleeding too much.
When Duncan Keith got all his teeth knocked out and came back in, you just thought well, that's the toughest SOB I've ever seen.
Same thing all over again with Shaw.
What a stud.

And you guys all know what happens.
17 seconds.
That'll be a famous catchphrase and a million headlines I'm sure.

What a jaw dropping, incredible, impossible turn of events.

Cut to Blackhawks jumping.
Cut to Bruins dejected.
Cut to the shaking of the hands shot.
Cut to Captain Jonathan Toews shaking hands with some guy and hoisting the Stanley Freaking Cup.

Artwork: A Patrick Kane victory mask for you to cut out. 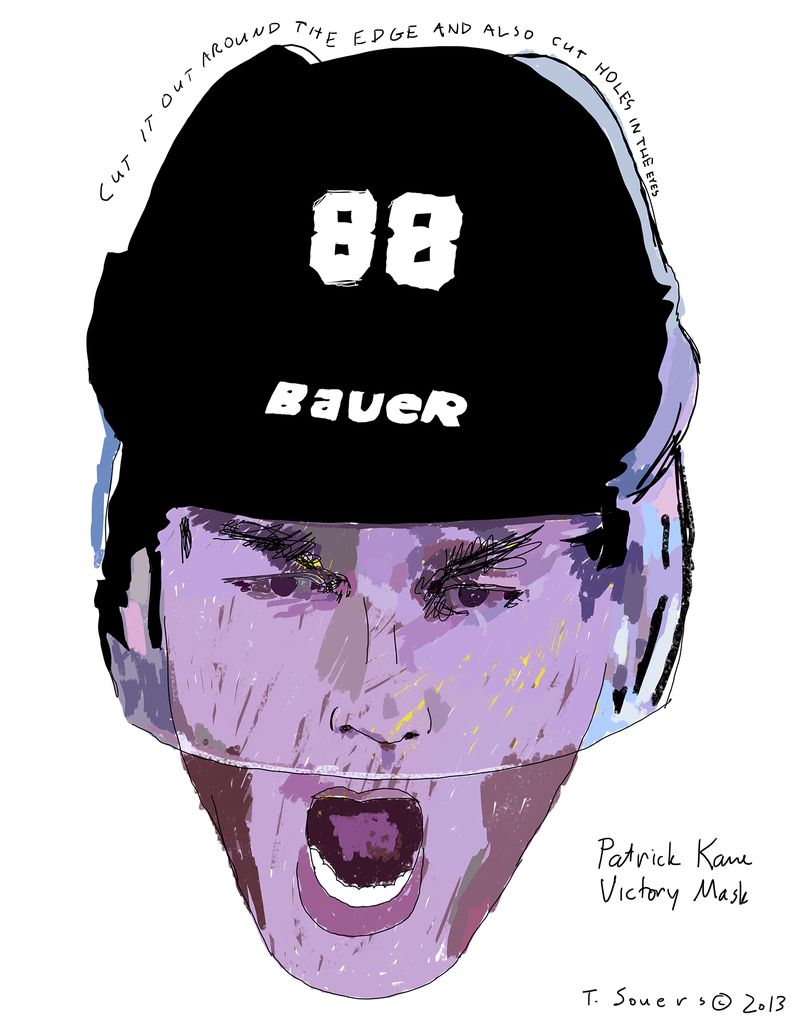 Wow this thing is kind of purple, but it's also like... emotional or something.

Okay so first, our Chicago Cubs kicked ASS today.
I'm not googling or anything, but the last time the Cubs scored 14 runs was when?
It probably says in someone's recap, but I'm not looking.
I'm just saying FOURTEEN RUNS?
That's like catching a musky, or eating a pear.
Never happens.
I can't believe I had to work or I SO would have gone today.
Jeff Samardzija against the Astros.
Goes 7 and gives up 3 runs and NO walks.
And Ryan Sweeney.
Remember Dave Sappelt?
The ex-Red who the Cubs got along with Travis Wood in the Sean Marshall trade with the Reds?
Yeah, well Sappelt sucked, so the Cubs sent him down and brought up Sweeney, who they got from the Red Sox because the Red Sox punted him.
So then David DeJesus gets the shoulder injury and he's out, and now Sweeney is the starting center fielder for the Chicago Cubs.
Again... Ryan Sweeney, starting center fielder for the Chicago Cubs.
Try remembering that even... oh... 2 years from now.
Anyway, Sweeney goes 3 for 5 with 2 doubles and a homer and knocks in 6.
His biggest day ever, and thank God because otherwise I might be writing about the Cubs dropping 2 of 3 against the Astros, right?
Cubs 14 Astros 6.

So a FABULOUS Sunday of Cubs baseball.

Tomorrow night the Chicago Blackhawks can win the Stanley Cup.
If you're a sports fan at all, you have to watch.
In about '94-'95, Greg Maddux is pitching for the Braves towards the end of his Cy Young years..
And he came to Chicago and in the Trib when the Trib was really good, Bob Verdi wrote a whole article on him basically saying you have to come to the park to see Maddux because he's in his prime and one of the best.
Ever.
And I didn't.
And I've been eating it ever since.
So... I don't know that the Hawks are one of the best ever, but they're the best now and these guys are young and just might be poised to be the best for years to come.
You have to watch.
And... I don't care if you print out the mask or not, but if you click on it you'll see it gets bigger, and the art is 8.5" x 11" so it should print out about the right size.
GO HAWKS!

EDIT: My Cousin Gurke texted me the following photo with the caption "CATrick Kane". 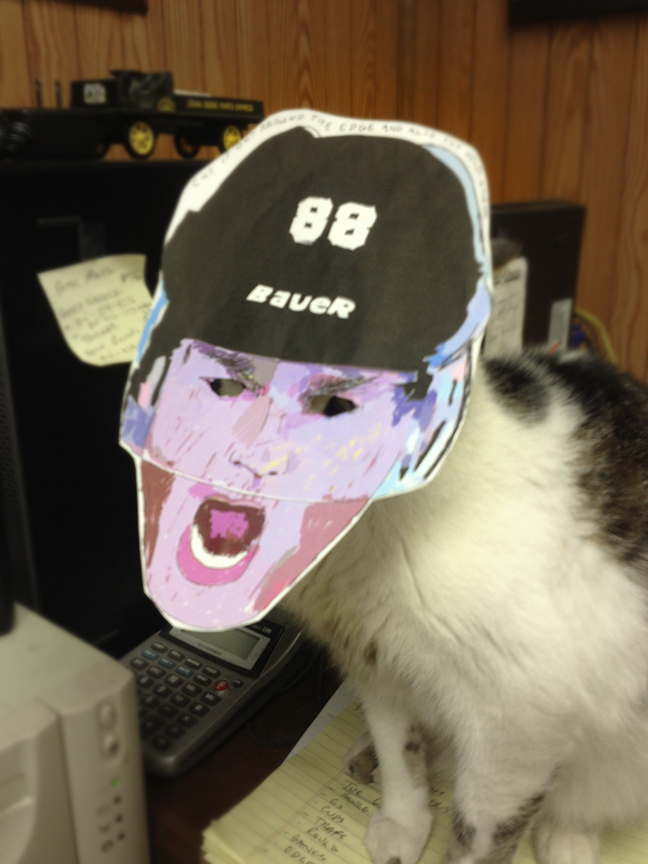 Call it a lack of sleep or jet lag or whatever you want - I have no idea how this gif came about.
I heard some of the Cubs 3-1 W over the (I Hate The) Astros on the radio.
Pretty awesome with the 3 dingers - especially Anthony Rizzo who hadn't hit one since early May and... well he's the one supposed to, right?
Darwin Barney led off this game, goes 3 for 4 with a homer.
After the game (in the recap at ESPN), he says "I'd be lying if I said I didn't learn something from watching those Cardinals hitters as well."
Pretty funny, I can imagine there's some truth in there too.
The Forefathers, they probably wish he'd have said that in a different way that didn't include another team.
Like the Cardinals.
But really this sounds like a tossed off nothing, I just hope you think the gif is funny.

Matt Garza was REALLY impressive.
And you know he's the biggest trade guy again this year - the rumors are swirling although I haven't heard any specifics.
He's 29, his contract runs out at the end of this year and the one he signs next will probably be enormous.
Lets see what happens as the trade deadline nears in July.

Today is Travis Wood up against Bud Norris.
It's the Cubs vs the Astros at Wrigley Field...