What do you call this stretch of time in Chicago Cubs' history anyway?
(I'm talking about the team playing in the Major League ballparks, of course.)
Is it The Intermission?
Growing Pains?
The 105th Year Stretch?
Even though most of us kind of shrug through these games, it's nice to see some kind of emotion displayed once in awhile.
Which was why I was so happy to watch an animated Dale Sveum run out of the dugout and argue for his pitcher.
You know, some things can get me off the couch and rattle the house with some yelling - the Rizzo homer that could have hit Murphy's, a Castro crazy-range play at short, and last night a good old fashioned tossing of the manager.
Felt good.
Made me wonder what it'll feel like when the Cubs are contenders.
When a 2-2 pitch to Ryan Braun in an April game may actually ladder up to something more meaningful than an evening's entertainment.
This game started off so rotten even Len said Samardzija musta got up on the wrong side of the bed, but then it got pretty watchable.
The insanity of Jean Segura's stealing second and then (the ump explained) technically stealing first made a definite memory.
And I found myself lost in the game and really caring when suddenly Kevin Gregg came in and, you know...you go oh yeah, this is just a halftime show or something.
But I'll keep watching and painting.
Sveum looks like kind of a bad-ass doesn't he?
You can't argue balls and strikes, Dale, but you can pracitce at it.
And one day maybe you'll LaRussa some ump into giving your team a break when it counts.

So the other night I was afraid the basement would flood.
I have this one giant drawer that contains all the loose paintings I've done over the years, and I yanked it out and put it on a table so it couldn't get wet.
It's about 3' x 3.5' big and has hundreds of illustrations.
One of these days I'll do a show. 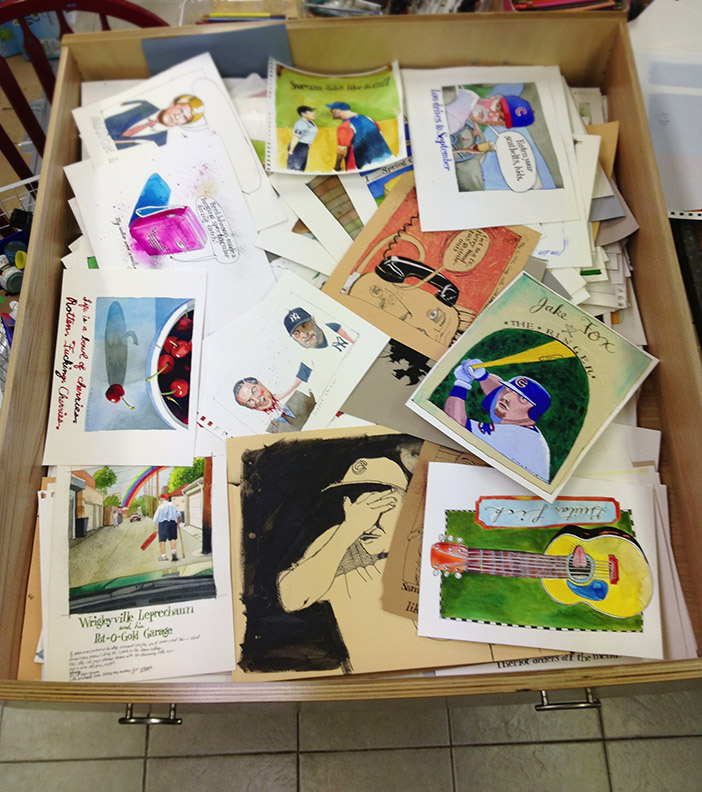 One of the worst days in memory, this rainy horrible floody gray day.
Who even thought they'd begin a baseball game at Wrigley?
Not me.
I didn't even notice my At Bat App, which must have vibrated and I never noticed, because later there was a little message saying the game was about to begin.
Whatever, turns out it was a fantastic day for a game.
Lots of really good things happened.
Like Carlos Villanueva pitching all solid like he has all the young season, only this time with nothing revolting happening with the pen at the end of the game.
6 strikeouts, one BB, and 2 solo Ranger homers.
Anthony Rizzo, he's obviously been reading those stories about the political fighting going on over the jumbotron.
And it musta made him mad because, if that fence wasn't up behind the bleachers, the massive homer he smacked might have gone through that awning at Murphys and hit a rooftop owner in the nads.
Starlin Castro, who had 2 walks in this game to give him 2 for the season, was standing on 1st when Rizzo hit it out, so that was a couple runs right there.
Then Alfonso Soriano hits another one out, his first of the year.
Maybe he'll catch fire for a bit now.
6 doubles (wow!), a triple, the two dingers all in one Cubs game, and all for the correct team!
James Russell and Carlos Marmol just made the last two innings go away.
Like it should be.
It should be noted that Marmol also struck out 2, and surely if you read around on Friday people will be saying TRADE HIM NOW!
But I won't.
I'm in far too good a mood, despite the rain that's still gonna be coming down.
Also, far far away on the other side of the country, a man we all know well is going to pitch soon for the Dodgers after overcoming surgery and spring sickness (twice!) and an overflow of mega-starters...Ted Lilly's gonna show some people out there what guts and the inside part of the plate are all about.
Good luck Terrible Ted!
A little closer to home it'll be the Shark, Jeff Samardzija, on the mound up in Milwaukee.
I understand they've been getting a ton of rain too, so keep the roof closed.
Go Cubs!

A Cubs Calendar of Dog Days.

I want to be clear, because this...was all an accident.
While I did start this season off thinking that the Major League version of our favorite team would be not so good...I didn't start off this season thinking Marmol would be so Marmol-like, that nobody would hit, that the bullpen would need to call somebody else's bullpen...
Anyway.
Awhile back, for no reason whatsoever, I bought a bunch of these little 3" square canvases at Blick Art Supplies.
Started painting little dogs on them.
Then, the Cubs had this horrible start.
Only at that point did I start to think hey, maybe just for something to do I'll make little "dog day" paintings for every loss this season.
And at the end of the season, I'll glue them all together on one board.
Like a Ziggy calendar if his little Ziggy-isms were about shingles or something.

We're 14 games in and there are already 9 dog days.
By the end of the season this may end up being, um, a fairly large piece.
But just to not be such a Captain Bringdown, let me leave you with this.
Maybe in 2015 or so, I can do another one.
One about winning.
One with different kinds of days.
Okay, so right now I know you're thinking right, that would be "unicorn days", but lets wait and see what happens.


No way any baseball will be played at Wrigley Thursday if this rain keeps coming. 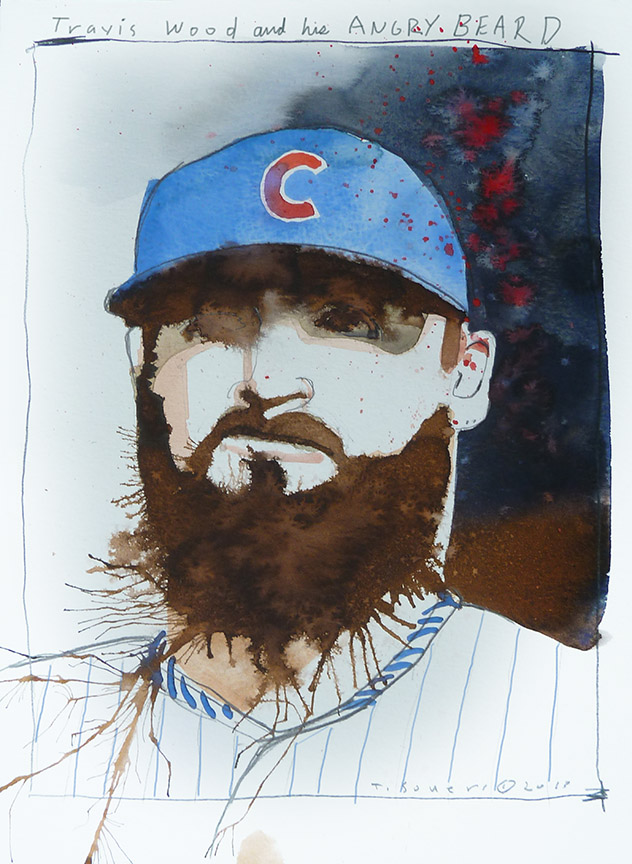 Imagine being Travis Wood.
Something obviously has clicked during this young season, and you're pitching better than ever.
The ERA is under 2, and you've gone 7 innings with the usually pretty powerful Texas Rangers and given them only 5 hits and 2 runs.
And now you've given up your 3rd walk so it's time to hand the ball over to Dale Sveum, who's going to give it to... Shawn Camp who gives up a single, makes a wild pickoff throw which allows a run to score and the runner to advance to third, and then gives up a homer to Adrian Beltre.
I mean, Wood had given up 2 runs and of course the Cubs' bats had gone 3 up 3 down in 5 of the 7 innings so far, so there was no way he'd actually get a W.
Man, how depressing.

I guess he's not really being wasted, you gotta learn how to deal with depression and a horrible bullpen experience I guess. And what better opportunity for that than on the 2013 Chicago Cubs?

Here's something, however, that actually got my goat.
Goat being a segue into Wrigley Field, which has been an unoriginal verbal punching bag for about the last 4-5 years.
Because it's a sewer. It has rats. It smells...
Lets see what the latest comments are, from our friend the Big Puma, Lance Berkman.
"If they're looking for a guy to push the button when they blow the place up, I'll do it."
And...
“Chicago’s one of the worst places in baseball … really for anything." 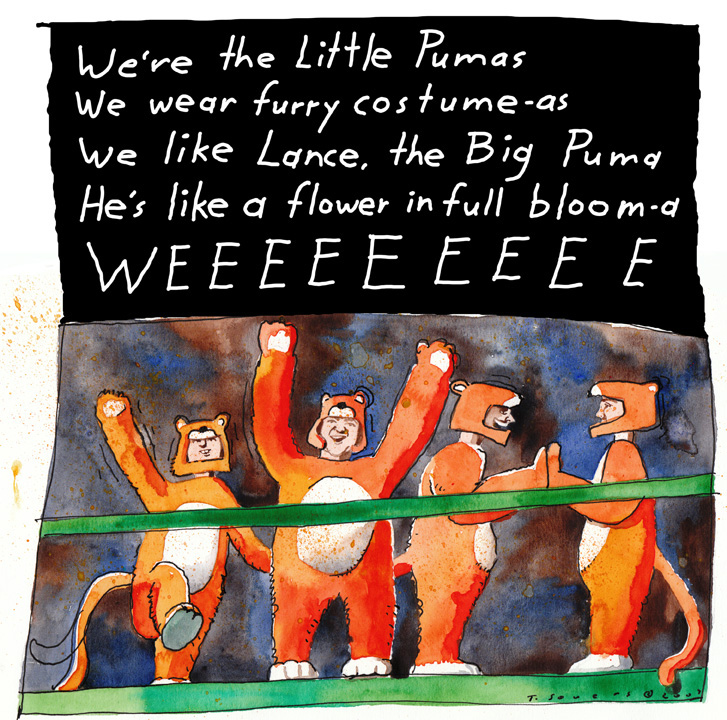 They used to dress up in furry costumes and, you know, display Big Puma glee.
But I also always thought he was a coward the day he fooled the ump into thinking he'd been hit in the head with a pitch. 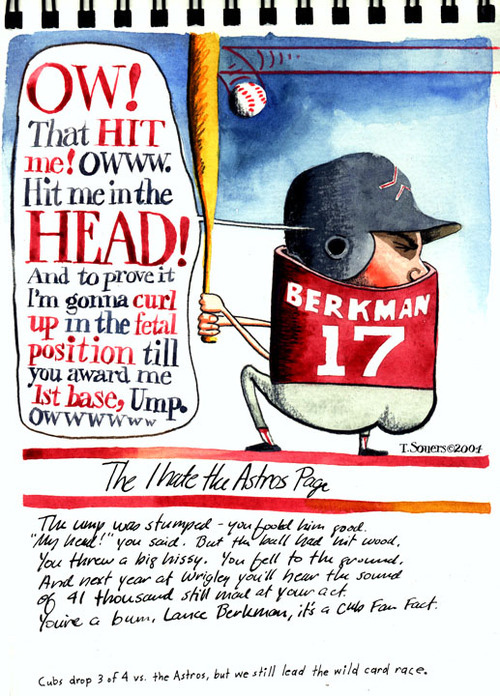 But the thing I love most is the quote above.
“Chicago’s one of the worst places in baseball … really for anything."
Because he's obviously talking about his personal problem of hitting (or not) at Wrigley.
Go here to read more.
Anyway Lance, as usual I hope you choke on a Chicago dog while you're here.

Tom Ricketts' stroll through The Garden of Earthly Delights (or, Chicago politics)

I can't imagine what the process must be like, trying to run the Cubs.
I mean, certainly the Ricketts have some nasty, powerful lawyers to help negotiate through this muck with the rooftop owners and their local politicians, but you have to think this is a pretty eye-opening experience for the Tom Family.
Kind of like a Hieronymus Bosch painting (go here and click on the thumbnails if you're not familiar).
If Vincent Van Gogh was an absinthe drinker, what the hell was old Hieronymus drinking?
The contract with the rooftop owners was signed in 2004 by the Tribune Co, and according to the owner of Murphy's Bleachers, Crane Kenney was involved.
Hey, the Trib had to be able to afford Neifi Perez SOMEHOW, right?
Anyway, I'm sure this thing is far from over, but cannot wait to see the actual plans.

Next, the Cubs/Giants series.
This bullpen problem doesn't seem like it'll go away any time soon.
Surprisingly tight, entertaining games that the Cubs coulda won.
Now we've got ex-Cub Kevin Gregg to the rescue.
Remember this game against the Astros when he gave up 4 runs in the top of the 9th?
Ouch.

Okay, nothing is really funny today with the explosions in Boston yesterday.

Kyuji Fujikawa out. The Cubs are droppin' like flies. (gif)

With Kyuji Fujikawa going on the 15 day DL because of a forearm issue, Steve Clevenger injured swinging the bat and scheduled for an MRI today (oblique), and Scott Feldman to skip a start because of something wonky in his back, the Cubs now have 8 guys out with injury.
Even if he's still on the team, it'a actually 9 if you count Marmol's mind.
So up comes Rafael Dolis and either Shawn Camp or James Russel will close.

Cubs lose another close one to the Giants 2-3 yesterday with one more game to go in this 4-game series: Edwin Jackson v Tim Lincecum at 1:20.
Somebody told me it's gonna be 70 today too, which ought to benefit all but especially Jackson who had the 5 walks in his last start v the Brewers.
Dioner Navarro has pinch-hit homers in the last two games - one from the right and one from the left.
Struggling Brent Lillibridge has one hit and no walks in 24 at-bats for a slash of .042/.042/.042.
Darwin Barney's gashed knee - please heal!

Monday we get to pay taxes and the Cubs get a day off before the Texas Rangers come to town for a 3 gamer.
And I'll be in the office today with Emily's radio on.
Go Cubs!