Cubs opening day: it's the MOST wonderful time of the year! (Of course it's a cartoon) 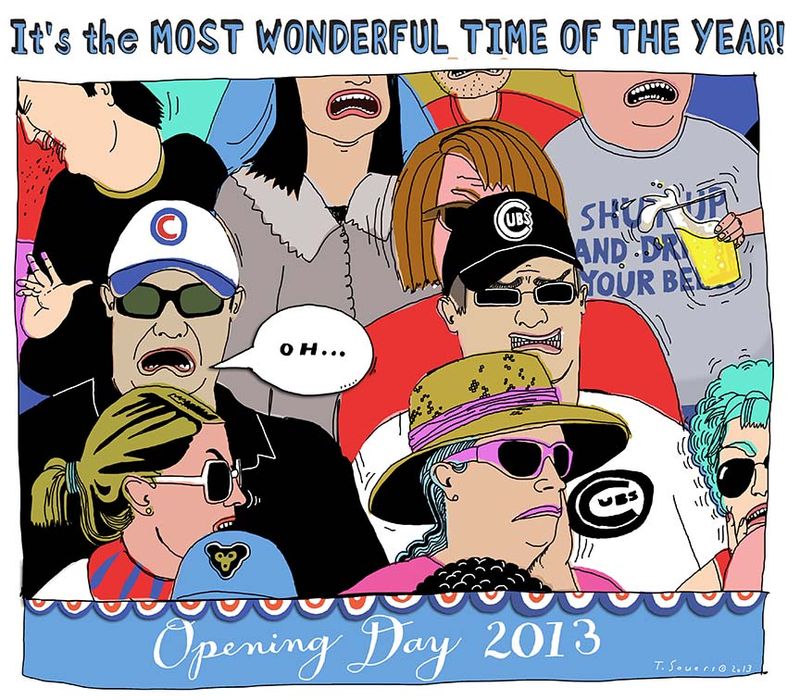 Come ON.
If you're a Cub Fan and you don't have a sense of humor, you're in the wrong line of work.

ps: pls note the glass half full in the banner...

This time of year always makes me feel like a kid again.
Like Christmas.
Only when I was a kid, we didn't have computers with the awesome Santa Radar Tracker.
So I thought I'd make myself a Cubs Radar Tracker just to make up for that.
Yes!
There they are!
In Houston of all places, playing their final game of the longest Spring ever.
Today we'll see the Only Cub Starting Lefty, Travis Wood, on the mound against the projected worst team in baseball, the newly American-Leagued Astros.
Then it's on to Pittsburgh on Monday, where it's supposed to be cloudy and 42 degrees when Jeff Samardzija goes up against guys like Andrew McCutchen and his 2012 96 RBIs and .953 OPS.

Come on, Santa, don't give me a lumpa coal.

Hey did you see the contracts that happened yesterday?
Justin Verlander gets 7 years for $180 mil, Buster Posey gets 9 years at $167 mil.
Moneyball meets Powerball.
Insane numbers.
You just read that according to Forbes, the Cubs are the most profitable team in baseball, worth a cool billion dollars.
I'd like to add up all the losses in the history of the franchise and divide into a billion just to see how much each loss is worth, but I'm too lazy, I'd get the math wrong as usual and why be a Captain Bringdown when the season starts in just a couple days? 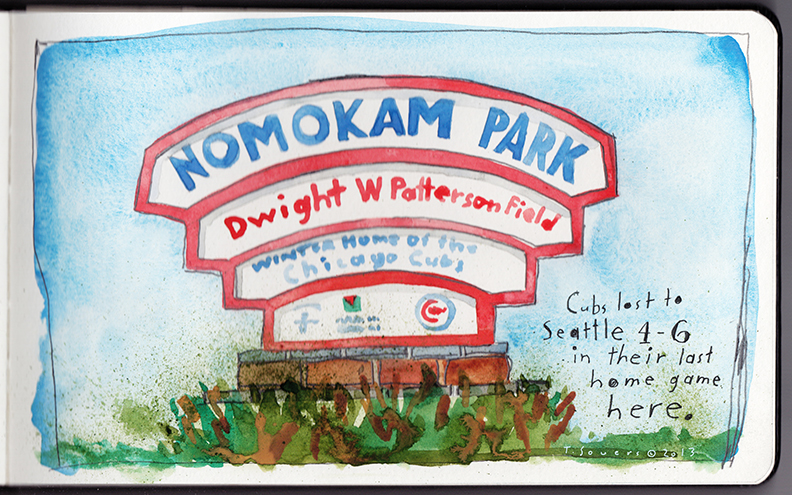 There will be no mo home games played by the Chicago Cubs at Hohokam Park.
I wish I could say that I went to a game there - I lived in AZ for years and never went so I'm not an "expert" on Hohokam.
But I would imagine most of us don't have any kind of sentimental ties to it at all, and that every Cub Fan is WAY excited about the new facility.
The one with the bass pond, an idea that's so simple and relatively small but captures the imagination and gives a whole different slant on the organization.
This isn't exactly the same thing, but did you hear that Honda has a car with a vacuum cleaner in it?
Just a small thing but man, do I ever think differently about Honda now.

Anyway, Hohokam will now be renovated and re-open as the Oakland Athletics home field.

The Cubs lost their last (home) game there 4-6 to the Mariners, and now they barnstorm (okay maybe not really barnstorming, but it's such a cool word) through Houston for a couple games Friday night and Saturday day, then a down day and then...OH MY GOD IT'S STARTING!

On April Fools Day at 12:35 we'll see Jeff Samardzija go up against A.J. Burnett.
I still hear the "I don't believe him yet" stuff about Samardzija, and yes it's not alot of starter history to go off of, but you just watch that guy.
I'm SO pulling for him to keep getting better and be the staff stud.

While it's probably true that Samardzija is the best hitter in the lineup after Alfonso, I choose to ignore that and instead will just listen for the magic words, "play ball".

Welington Castillo might be the most interesting story on 2013 Cubs. 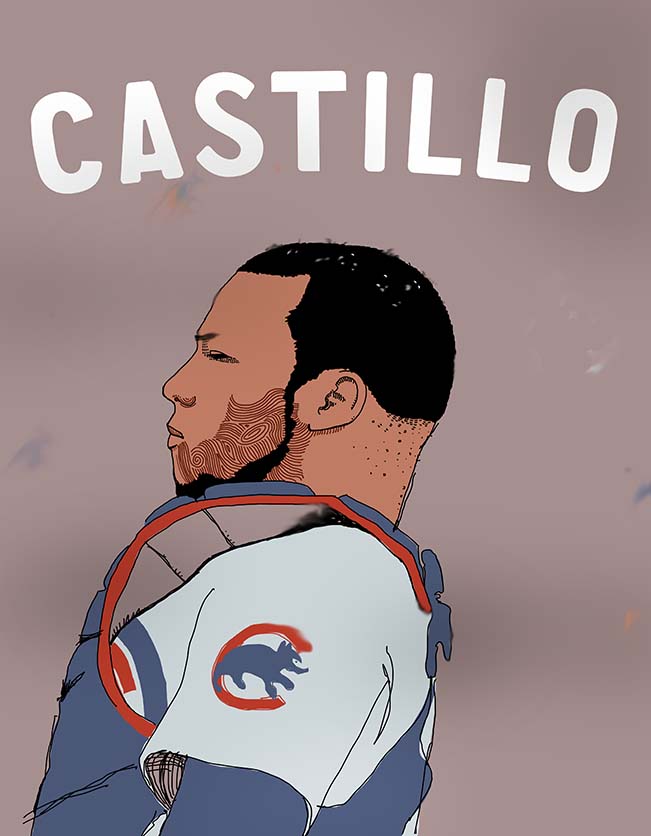 You sure hope he's the right guy.
I think he is.
Wellington Castillo is the catcher in the right place at the right time with hopefully the talent and wherewithal (when you write a blog, sometimes you use words you never imagined you'd actually say out loud) to be THE GUY.
The on-field manager.
Caller of pitches.
Handler of giant egos and fragile insecurities.
Possessor of toughness and guardian of the plate.

And maybe hit one out now and then.

If Theo Epstein and Jed Hoyer's plan works out, Castillo is a gigantic piece.
By the "right place at the right time", I mean he's a 25 year old kid who can mature during this year and the next so that in 2015, the year most say will be when the Cubs should "compete", he'll maybe be polished enough to do all that stuff a catcher's supposed to.
It's nice the Cubs got Dioner Navarro to mentor, too.
Here's what Josh Shepardson says about Castillo in his BP article about fantasy rankings (I'd link, but you'd have to have the subscription): Castillo.. "has had his own strikeout issues in the bigs, but ... his upper-minors history does suggest that he can rein in the whiffs. His power is appealing, and while his batting average won't be an asset, it may not be as bad as the ones posted by some of the other power sources at position."

I'll take that, and I can't wait to watch him.

So, you know, only a couple days now...
God is it NICE to think about real baseball again.

Maaaaan.
I'm about ready.
You? 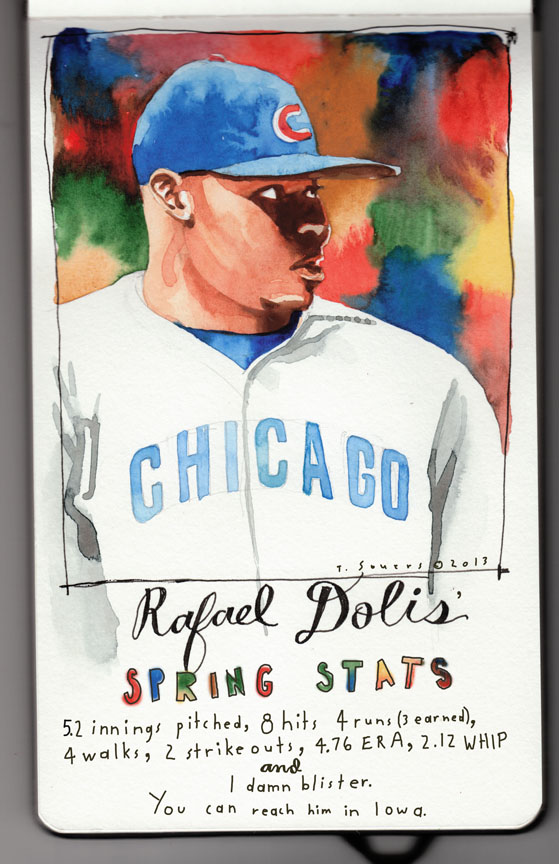 Probably I've seen him throw 100 mph, but I can't remember it.
Mostly when I think of Rafael Dolis, I think of potential but no control and what a crying shame it is that an arm like that can't figure it out.
He had a blister that didn't help, and neither did his numbers.
I always figure it's got to be the gigantic exception to the rule when a guy actually changes the mind of management during ST.
Sure, Dale Sveum is mulling over these last couple relievers, but I would imagine he's had his mind made up for awhile on who's in and who's out.
And Dolis needs to be polished more, I guess.

Scott Baker's news is worse.
They're shutting him down for a month and then re-evaluating, which I guess translates to the 60 day DL with an actual chance of coming back, assuming his muscle (apparently not the actual tendon that they put in the place of his ulnar collateral ligament) heals in that time.
But Sveum - what can he do but talk like this? (from Cubs.com):
"We do have the luxury with the depth we have," Cubs manager Dale Sveum said Sunday. "It is obviously a setback [with Baker] but it's not to where he won't be able to pitch this season."

Depth?
I think I've quoted John Prine before.
This is from "Bruised Orange":
"Hey, it ain't such a long drop don't stammer don't stutter
From the diamonds in the sidewalk to the dirt in the gutter..."
Still, we're in the middle of Re-Birth here, so whatever.

On the brighter side, it's one little week til actual Cubs baseball will be back.