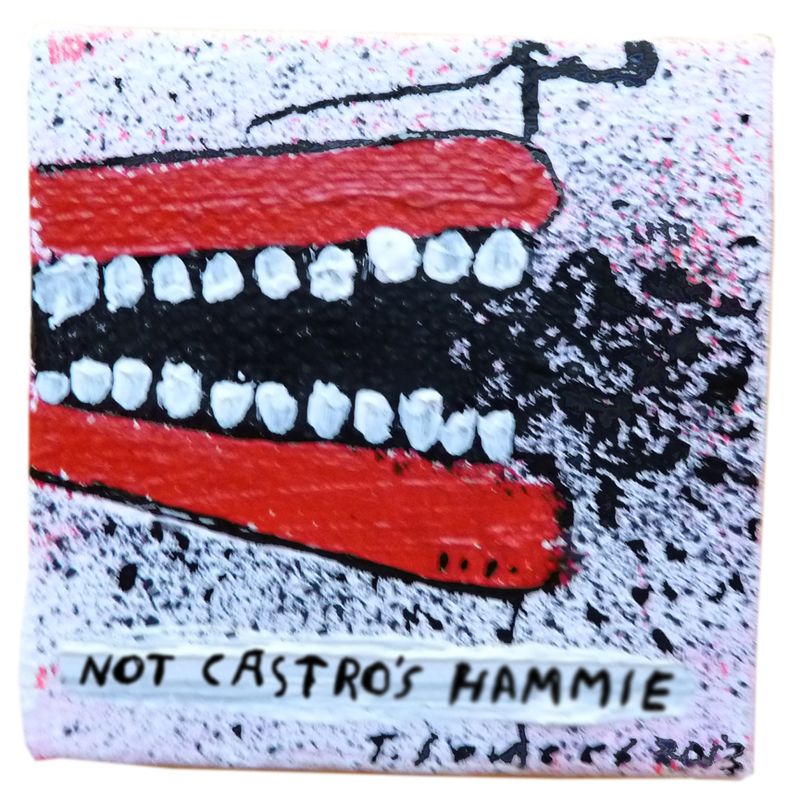 I SWEAR!
I get the little alert on my At Bat App - the Cubs are losing to the Dodgers.
But it's just crazy busy - I finally turn the thing on and hit the radio button on low so I can hear it and still do all the other stuff that's going on.
The second I do...
The SECOND.
I mean there is no other sound before, "..stro pulled up! I can't tell if it's the upper leg or...Here come the trainers and they're taking Castro off."
Something like that.
Not really sure.
But you know, I'm in advertising.
I don't recall ever throwing up in my office even back in the days when, well...nevermind.
Anyway, you can still count me among those who haven't thrown up in their office, but can we please just get to opening day without another freaking hammie or quad or whatever?

Gotta run.
Stuff to do.

EDIT:
Story from the Sun Times: "It was more tight than a pull or anything like that.’’

Story from ESPN: Castro not worried.

What do we think of a Soriano to Yankees scenario?

I got a little excited the other day when I read that Curtis Granderson busted his forearm when he got hit by a pitch - ONLY because we all thought hmmm...maybe the Yankees need a little power/outfield help.
I really like Granderson and it makes me hurl that he got hurt, but the possibility of Soriano actually being needed enough to garner interest from the Yankees, well that's just interesting.
I posed the question over at The Cub Reporter - what might the Yanks give in return?
I mean - the Yanks have got some prospects, right?
The first answer I got was this: "Washington, Jefferson, Lincoln, Hamilton, Jackson, Grant & Franklin are possibilities".
And the second answer was really underwhelming so I kinda put it out of my head.
But since then, lots of people keep bringing it up - why it should or shouldn't happen.

Then I thought about last year.
He was kind of awesome, and honestly a couple years ago if you'd have suggested he could improve so dramatically in the outfield, I would have laughed in your face.
But he did.
He also turned out to be a positive influence on the kids.
Managers have said it for some time, but I never really believed he was such a hard worker.
Anyway, yeah it's a horrible contract - maybe the worst thought-out ever, but last year was sort of Hump-Day on the whole deal.
It's now Contract Thursday, and I don't feel that venom welling up in me about it any more.
I kinda think he might help make this summer a bit more enjoyable now.
Selfishly speaking.

Hey, if Theo and Jed can wrangle a prospect then great.
Soriano's still got another year at a disgusting amount of money and the Cubs are willing to eat a bunch of it.
But probably a trade is so impossible it's not even worth talking about.
I don't really care any more.
Let him hit some more homers at Wrigley.
Hopefully I'll be there when it happens.

Theo Epstein has Oscar Royalty in his family tree. 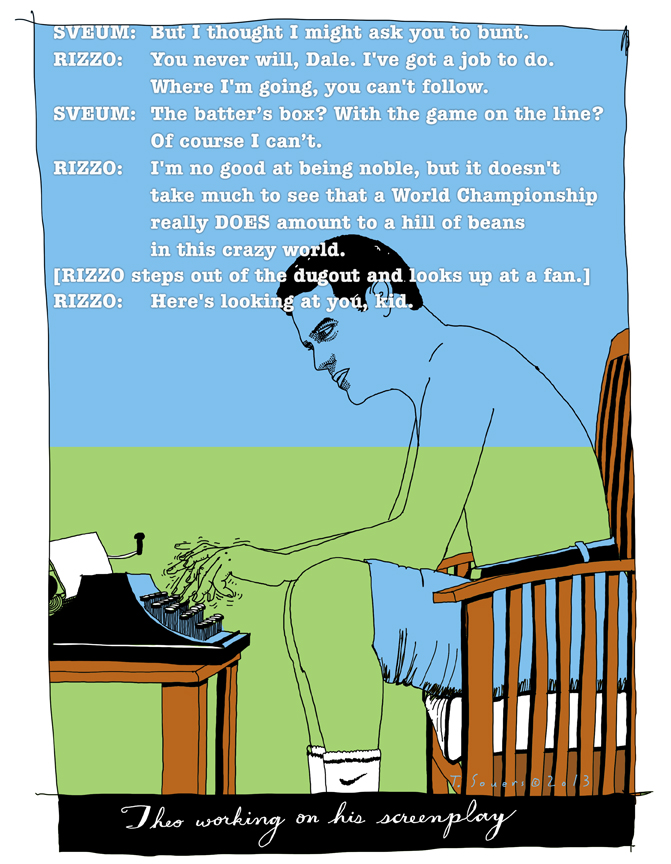 I'm sure you know it's Oscar night and that our own Theo Epstein has Hollywood Royalty in his family tree: his great uncle Julius Epstein co-wrote (with his brother Phillip and Howard Koch) the screenplay to the Academy Award winning and amazing "Casablanca".
Humphrey Bogart, Ingrid Bergman, Peter Lorre, Claude Rains and that other guy...
Shot in fabulous black and white, it's studio Hollywood at it's best.

I googled "Casablanca Quotes" and found this link, and messed with the following scene:

Ilsa: But what about us?
Rick: We'll always have Paris. We didn't have, we, we lost it until you came to Casablanca. We got it back last night.
Ilsa: When I said I would never leave you.
Rick: And you never will. But I've got a job to do, too. Where I'm going, you can't follow. What I've got to do, you can't be any part of. Ilsa, I'm no good at being noble, but it doesn't take much to see that the problems of three little people don't amount to a hill of beans in this crazy world. Someday you'll understand that.
[Ilsa lowers her head and begins to cry]
Rick: Now, now...
[Rick gently places his hand under her chin and raises it so their eyes meet]
Rick: Here's looking at you kid.

So funny to read this without Bogart and Bergman's performance.

Anyway, back to the Cubs.
You read that Ian Stewart is out for about a couple weeks with the quad strain.
You know what?
IT AIN'T FAIR!
I mean, I hardly know the guy but can he please get a freaking break?
He's like the mummy or something.
Luis Valbuena, I mean...I'm glad there's somebody who can play the position.
I am.
I'm calming down.
Never mind what I was gonna say.

I looked at the Texas Rangers non roster invitees.
You know who's there?
Randy Wells, Neal Cotts, and Jeff Baker.
A mini Cubs Convention.

Okay back to Theo.
I imagine him writing his screenplay sitting in some nice patio furniture and spring training happening in the background.
He's figuring out who the characters will be.
"What do you mean I should cast Alfonso Soriano? I want the new Soriano. GET ME A YOUNG SORIANO!"
Theo's already figured out the storyline, and now he's just roughing in bits of action.
Yeah, it'll be a couple years til it's finished, but I can wait...

Ah well, I gotta get some Sunday stuff done, then I'm watching the Oscars.
I want Alan Arkin to win best supporting actor.
Yeah, he won recently, but he's on another level of genius and of all the movies I've seen this year, I got the hugest laughs from his performance in Argo.

Just a Cub Fan takin' one for the team. 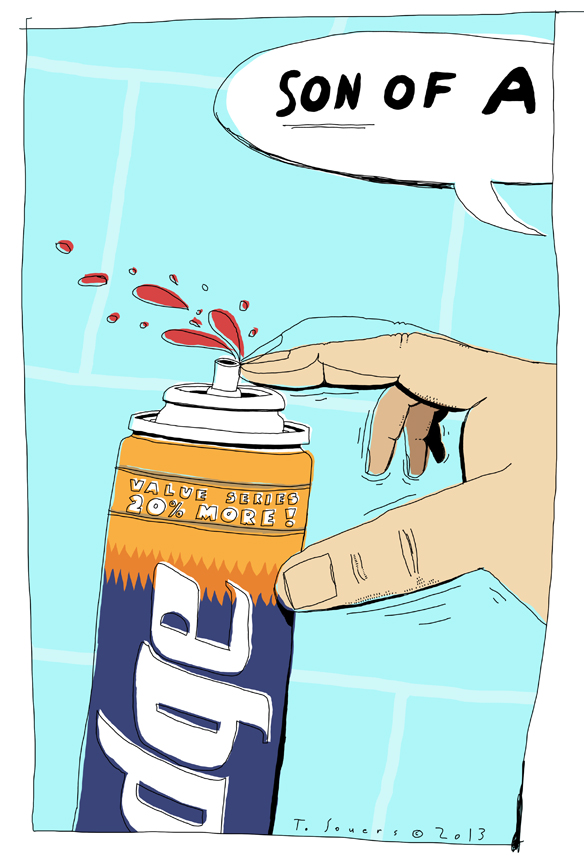 I'm not gonna lie to you.
I've been uncommonly busy, and other than that Jorge Soler homer I'm completely out of touch with what's going on with the Cubs.
I plan on catching up this weekend.
But this thing happened this week, and it'll continue to happen, and when it happened I realized it was kind of a reflection of you and me as we follow our favorite team to eventual glory.
I got a new can of shaving cream.
Edge.
And I dropped it and the top cracked - the part with the squirty thing where you push down and the shaving cream comes out.
I threw the top away.
Underneath is a tiny little tube that leads into the metal "bottle" where the cream is.
It was like opening the hood of my car - oh THAT'S the thing that makes the car go.
And if you push down on the edge of the tube, you can force it into the bottle and get the shaving cream out.
The only thing is, you have to push really hard and straight down with your fingernail to make it happen - if you cover the hole of course nothing can come out.
So I did that.
And my fingernail ripped open resulting in sharp kick-in-the-shin-type agony and a scream that made the cat throw up.
But will I throw it away?
I mean, it still works.
Will I just toss out a perfectly good can of shaving cream and get a new one just because it makes me bleed when I try to use it?
Just because of a little pain that I'll experience each day?
Hell no.
I fear no pain.
I'll take your pain and run a mile and laugh while I'm doing it.
Pain is normal.
Pain is the sun coming up, or putting on pants.
I hold hands with pain.
If I'm salt, pain is pepper.
In 1969 I was watching a Cubs game on a Zenith black and white with my Grandpa when he screamed WHAT IN THE EVERLASTING HELL LEO DUROCHER YOU BUM and I inhaled that pain like an air-borne virus.
Pain doesn't even knock - it has the keys.
PAIN LIVES HERE.

YOU THINK I'M GONNA THROW THAT CAN OF SHAVING CREAM AWAY!?

Okay.
I feel a little better.
And uh, that's about all I'm good for today.
I'll catch up on the latest news and get back to you.

Yes it's true.
Space debris in the form of a meteor heading to Russia and some pure Cubbery conspire to set Matt Garza back just as Spring Training starts.

I can only joke about this because, well, I've earned the right as a card-carrying Cub Fan.
Plus, I'm choosing to believe that it's not really serious.

Why Travis Wood will probably start for the Cubs.

Man, in the time it takes to do a gif on the first day of full workouts for the Cubs, lots can change.
Like Matt Garza feeling a twinge in his lat (below the left shoulderblade) and having to leave practice.
When I was making the art, I figured (as many do) that if Garza stays healthy and shows he can pitch, he'd be gone before ST was over.
Now, they say there's no real reason to panic about Garza - they're stressing that it's a "minor" tweak.
But of course, last year I believe the injury that kept him out for half the season was first called a "cramp".

Aneewhoooooo, lets take a look at the current 40-man: 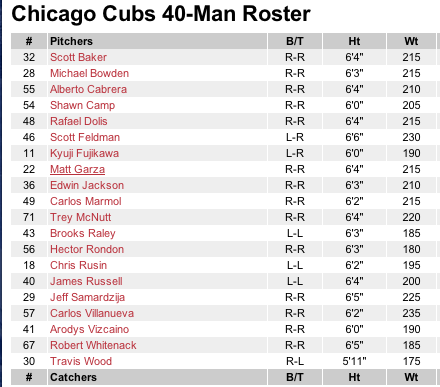 You can see, Wood is one of 4 lefties on that whole list.
But Brooks Raley and Chris Rusin don't figure to be major leaguers this year, so in reality Wood is one of 2 lefties, and the other is important setup reliever James Russell.
So even before the Garza thing yesterday...we all heard Dale Sveum say he thought Scott Baker would be fully recovered by about week one, so the starters would be Samardzija, Jackson, Scott Feldman, Garza and Baker.
All righties, and one lefty reliever?
Seems weird, man - I just figure that one way or another Wood will be around in week one, and probably around should Garza get traded.
I feel bad for Hector Villanueva, but unless he looks WAY better than Wood, Wood gets the nod.
And if you disagree, that's okay - I really just wanted to do the jokes in the gif.

You know what I did yesterday?
Got my car washed at a place with humans doing the cleaning.
$25 bucks with a nice tip.
I hadn't done it since September, and my car had taken on an odd camouflage look - the color of pollution, salt, and road poop.
It really put me in a great mood, and surely it's gonna rain today to wreck everything.