Once in awhile, you'll hear about someplace getting busted for selling exotic animals or animal parts.
You know, for humans.
To do stuff with.
I think I read that tiger nads do something for your sex life, for instance.
Shark fin soup.
But I'd never heard of "deer antler spray" until yesterday.
Come on, man, that's just plain freaking strange.
Spray it under your tongue?
I looked it up, apparently sales are way up.
Here are some comments from somewhere:

Hmmm.
Gets rid of tennis elbow...soothes knee joint pain, the Chinese have been using it for years, AND it improves sexual performance!

As if deer don't already have enough to worry about.
Fire, weird weather, no food, the wolf, the mountain lion, the hunter, and now your average dude with sore knees and a boner problem.
Or... apparently Ray Lewis, a not-ordinary dude who's playing middle linebacker in the Superbowl on Sunday.
Whatever, Ray.
I hope the Niners smoke the Ravens.
In fact, I just bought a rabbit's foot for luck.

On to much cooler things, like the Cubs.
Did you see they hired a new "saberist", Tom Tango?
This is so interesting, because he's looking for statistics geniuses to help out.
If only I'd gotten into math rather than art, I'd TOTALLY be sending in my resume.

Ronny Cedeno is a Cardinal and A-Rod is a mess. 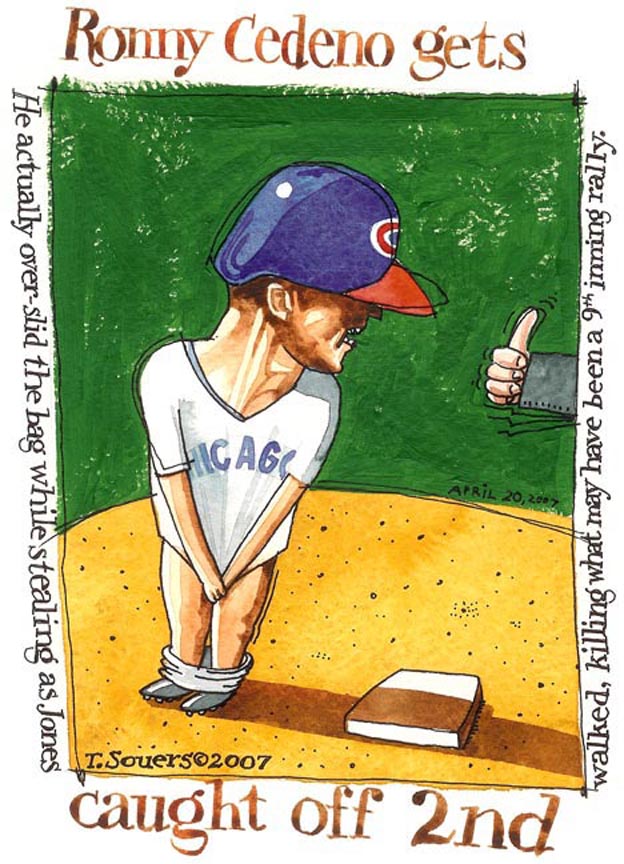 The St. Louis Cardinals signed Ronny Cedeno so I thought I'd take a trip down memory lane.
The below story is from a Cubs vs Cardinals game on April 20th, 2007:

There's a song by Lou Reed called "Growing up in public", but the line in the song is actually "Growing up in public with your pants down."
Happened to Ronny Cedeno yesterday.
I'm in my office listening on Emily's radio at really low volume as I'm working.
So I'm not really paying attention.
With the Cubs down by a run in the 9th and one out, Lou put Ronny in as a pinch runner at first.
Jacque Jones is up, and I hear Pat Hughes say he walked.
Rally!
But then immediately Ron Santo starts making his painful noise that means something awful has happened.
Doesn't make sense, but somehow Cedeno is... out?
Going from first to second on a walk?
HOW CAN YOU NOT KNOW a guy walked when you're on first in the most crucial part of the entire game?
How can you...slide over to the wrong side of the bag?
Just another nightmare.
Anyway, today I'm taking Emily and Wyatt to our first game of the season, and it's against the Cards.
Added bonus: it's ex-Cardinal Jason Marquis vs. Anthony Reyes.
It's beautiful out, supposed to be 75.
And the festivities will begin with this: Wyatt and I will finally get to set fire to the Cardinal hat he bought last year specifically for this purpose. (see Cardinal Hat)
It's gonna be a great day.

That was fun, and I hope the Cardinals too can enjoy the memories Ronny Cedeno can provide.

Okay, what else?
MLB put out their top 100 prospects including Javier Baez, Albert Amora and Jorge Soler.
That's awesome!

And on the other side of awesome would be awful.
As in Alex Rodriguez and another story about cheating and lying.
Read Stark, and go to the links in his story.
It's tiresome, it really is.
You also know I think it's not just lying.
It's stealing.
I really hope the Yankees can take back their money, because none of the cheaters will pay attention til real money is involved.
A year's salary for A-Rod is serious.

How sweet it was watching the Blackhawks pull out the 2-1 overtime victory over the Detroit Redwings and continue their record-setting and undefeated beginning to this season.
Between the announcers and interview with Corey Crawford, it appears he's seeing a huge puck move in slow-motion, which is why he's in such a perfect state of denial right now.
Puck-denial.
No time to chat, gotta run.
Don't forget to get your "Happy Pitchers and Catchers Report Day!" cards!
Go here and click on the folder that says "Happy Pitchers and Catchers Report Day".

The Blackhawks have actually kinda opened with an 8 game winning streak.

Uh oh.
Math.
If the Blackhawks have won 5 games to open this shortened 48 game season, what does that pro out to if it was a regular 82 game season?
Lets go to Math.com to find out.
Ok, so N wins over 82 games equals 5 wins over 48 games... 48 X N = 82 X 5... 48 X N = 410... 410 divided by 48 equals...8.541 WINS!
Of course, you'd normally round that up but since Duncan Keith is from Canada and we know Canadians are all super polite and never too boastful, he rounded it down to 8.
Anyway, these 5 wins to open the season are proportionately equal to the 8 something wins in a normal season and in my mind represent a new Blackhawk record.
Should they continue their crazy winning ways tonight against the Evil Empire Detroit Red Wings, well, that's like winning their first 10 games.
Wow.
If you're just plain mad at hockey and their stupid strike, you should try to get over it unless you live in Washington, where they haven't won a game yet, which pros out to 0 wins in the regular 82 game schedule.
In Chicago however, we should be pretty happy.
And we'll be even happier with a win tonight.
BTW, the Hawks are giving away a ton of cool stuff to try to make it up to the fans for the above mentioned stupid strike.
Go to Blackhawks.com to sign up to win one of 30 items per game (like autographed jerseys, sticks, tix...).

And now I guess we just wait for the MASSIVE ICE STORM to hit, and watch some hockey.

Lastly, somebody downloaded some of my Blackhawks art and tweeted it, and right now it's on the Blackhawks.com splash page! 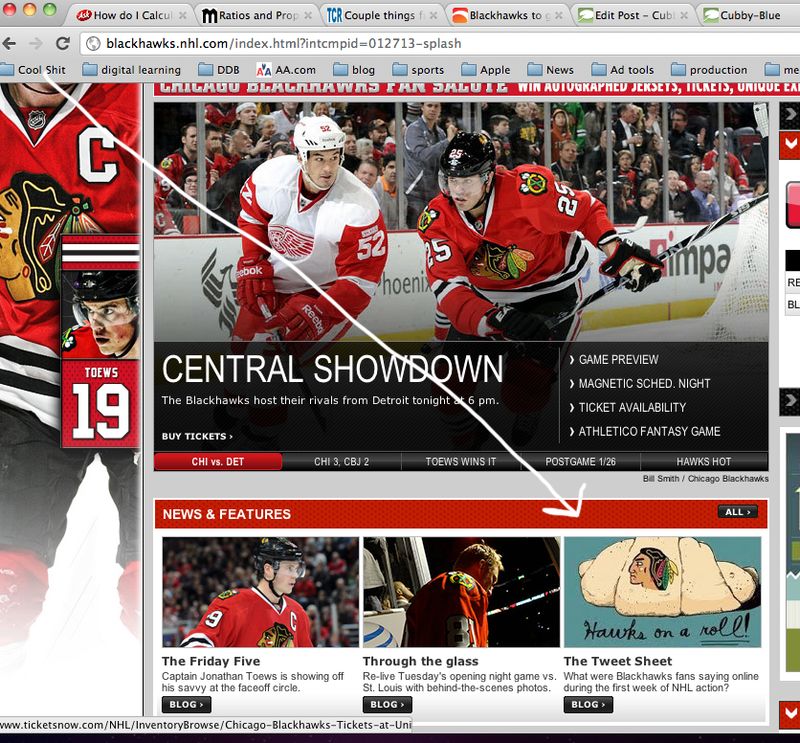 Tweeter named blap7 tweeted it and even gave me credit for the art.
If you're reading this blap7, thanks.

The Cubs signed last year's Met outfielder Scott Hairston to a 2 year contract maybe worth 6 mil.
They say he'll platoon with other new guy Nate Schierholtz in right.
One of 'em hits lefties well while the other hits righties.
Read that somewhere too.
Or he may play some center once in awhile to give DeJesus a break.
Or the Cubs may surprise us all and finally make a Soriano trade and one of these new guys plays some left.
Or the radical changes in Brett Jackson's swing will allow him to not acquire strike outs like Homer does donuts, and they bring him up in July so they can trade either Schierholtz or Hairston for the pitcher to take Baker or Feldman or Wood's place as probably one of those guys will be doing well enough to attract the attention of a contender.
Brain...hurt.
Must...talk...about something...else.

So there's a buncha "Happy Pitchers and Catchers Report Day" greeting cards for you to peruse on the Cubby Blue Zazzle store. If you actually order one, you've got plenty of time for it to arrive, write something and send it to another Cub fan.
That's a new design up top of this post.

Pitchers and catchers report in 18 days, on February 10th.
It's early this year because of the World Baseball Classic.
But I think I'm right on time if you want to mail a card.
I have a number of them, but here's a new one you can get here on Zazzle in the folder called "Happy Pitchers and Catchers Report Day" Cards.
I made it into the gif below so the first drawing is the cover and the next is the inside.
Just spreading a little baseball joy.

Baseball?
Yeah, baseball.
Speaking of which, did you see our old buddy Mark DeRosa (nice article here) got picked up by the Toronto Blue Jays?
That team - who knows what they'll do this year with that crazy Miami trade, but it would be cool to see him do a little more damage before he hangs 'em up.
On the other hand, there's Kyle Farnsworth who, at 36, still has teams actively after him.
Teams.
Plural.

I started an acrylic of Jim Harbaugh sort of based on the style of Francis Bacon.
If it turns out any good, I'll post.
He's obviously a better coach than QB, but still I think he's definitely unhinged.

Lastly, if you like the card above but don't want to hassle with Zazzle, drag this drawing onto your desktop, print it out on 8.5 x 11, and fold on the red lines. 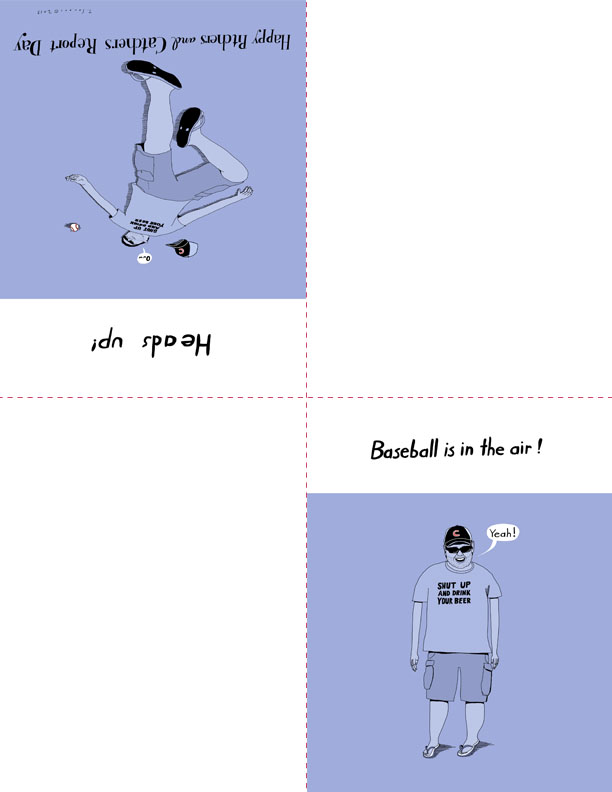 Ps: here are more new ones I'll update as they upload. 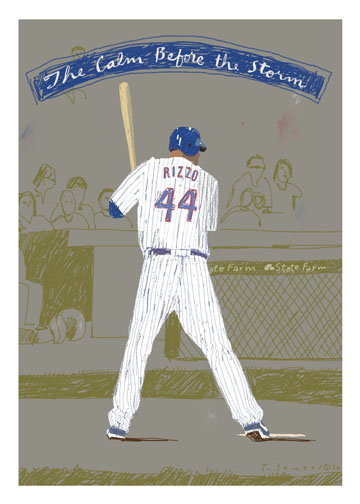