I am shocked, SHOCKED that the Bears are canning Lovie Smith.
I mean, it's the right thing to do of course, but I've been trained to expect the wrong.
I think because of how long it took to fire Jerry Angelo, who had his job maybe 25 years longer than he should have.
Strangely, I could hardly find anything but Anti-Lovie art in here, so here goes and not in any particular order:
Lovie losing to Detroit last year. 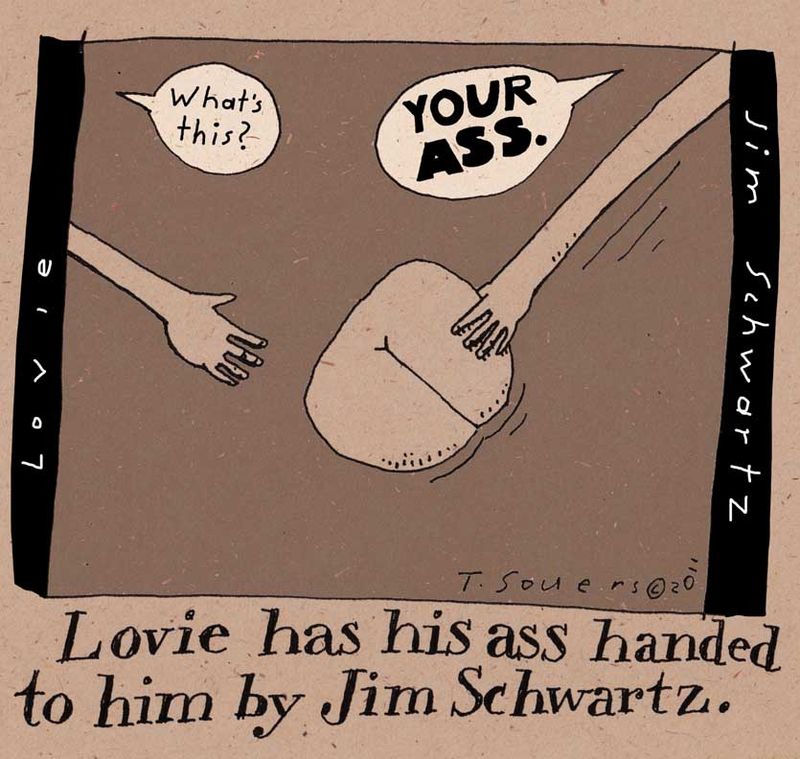 The Dunce Helmet, from um...well it could have been any number of games. 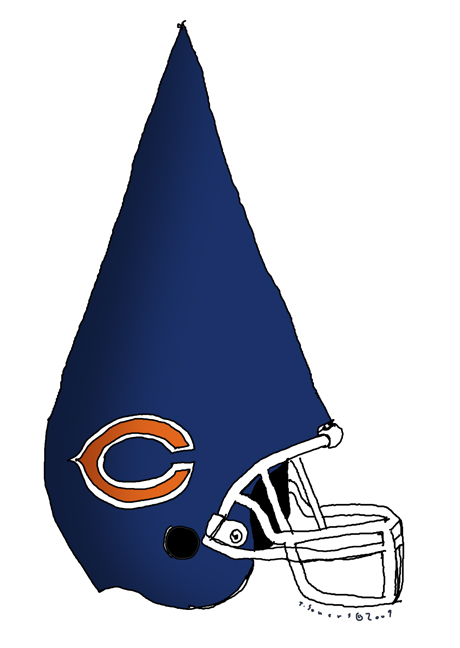 This one is from 2010 with Governor Rod, Jerry Angelo, and Jim Hendry. 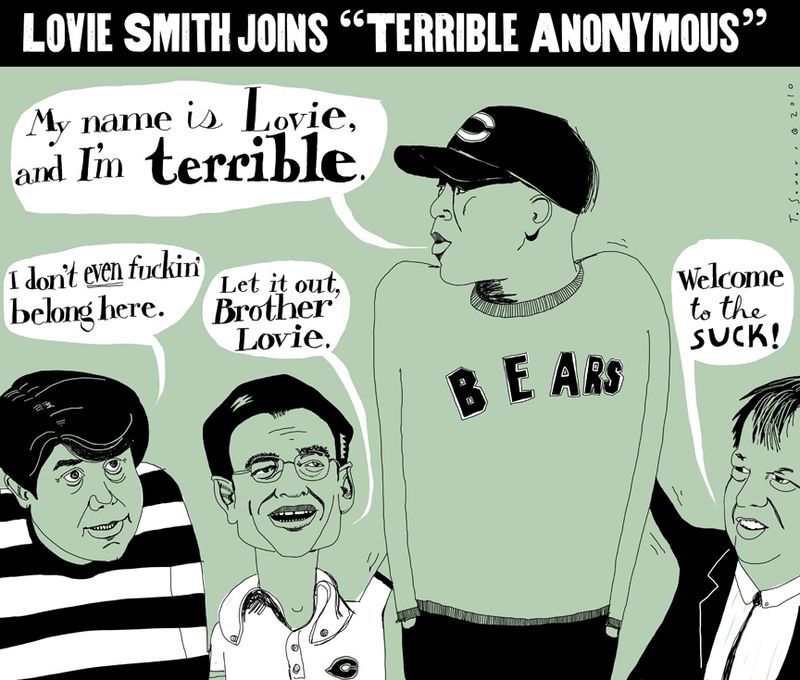 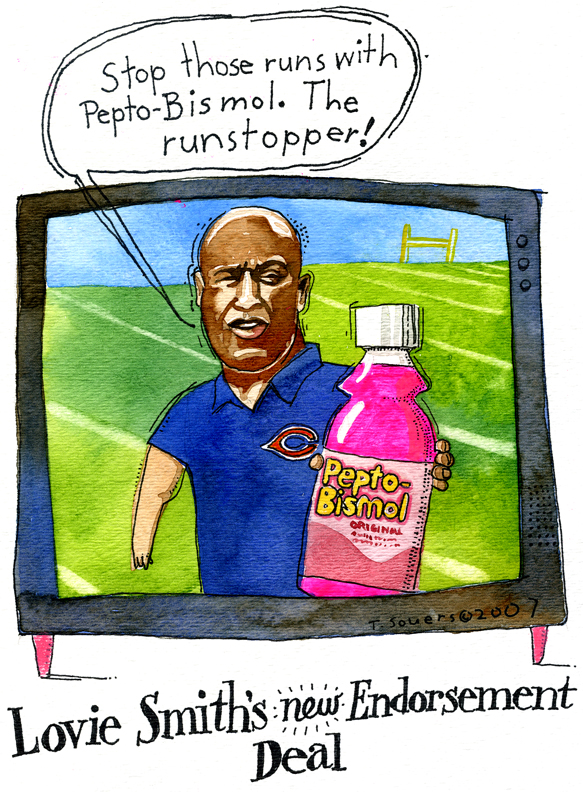 Not so good at the end of last year.

Did you know that Lovie's sidekick Ron Turner almost became offensive coordinator for Stanford when Andrew Luck was there?
Lucky for Luck it didn't happen. 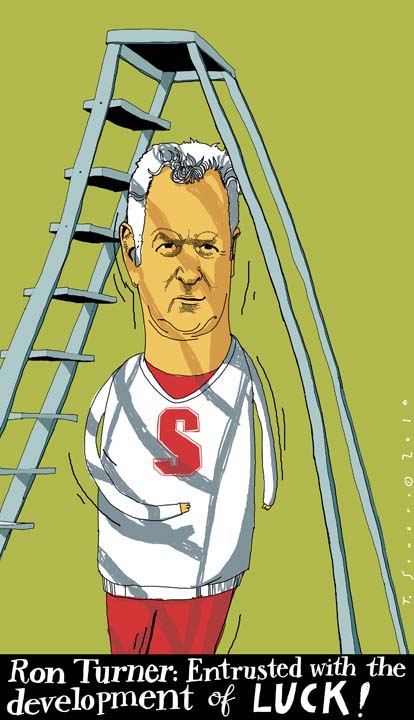 And finally, Caleb Hanie. How did Lovie think this guy was good enough to be in the NFL?

Instead of Chili, try Pork Tinga with your Bowl Games.

First off, the hugest news of the day is Lovie Smith is getting canned by Phil Emery.
This is pretty good as far as timing goes since the Bears can hopefully be close to the front of the line for new head coaches and...it's a whole new start.
Who wouldn't want to come to Chicago and bring our poor city a Superbowl Championship?
Next... 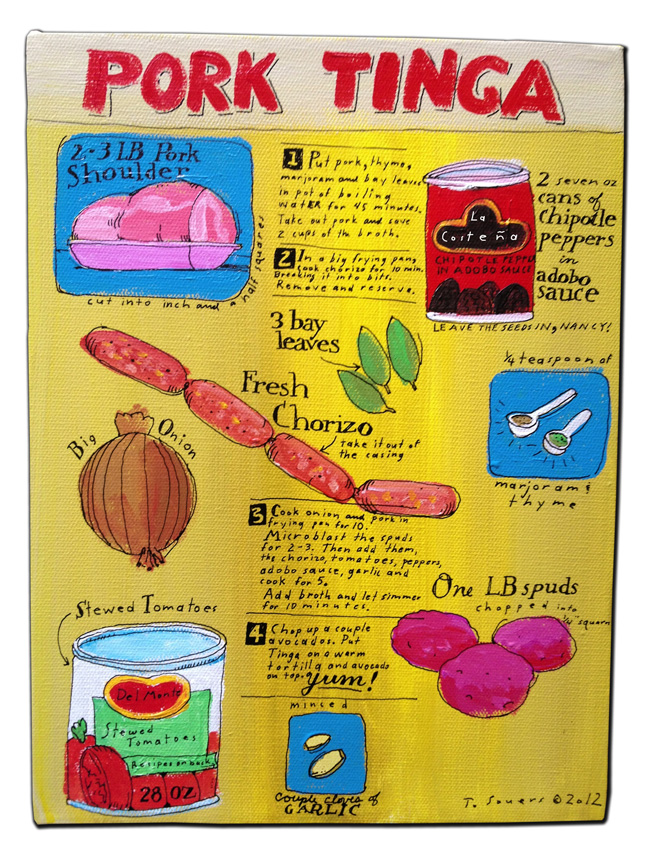 Okay.
Say "chili".
Kinda boring, right?
You've heard it a million times in your life, like "salt" or "Yankees win the World Series".
Now say "Pork Tinga".
Let the "i" stretch out like "TEEEEEEEnga".
Brother, that is just plain fun to say, and when you try it you'll go oh my god I need a beer and a tv with football.
I can't remember where I first saw it, maybe a food section or something, but it was a Rick Bayless recipe and he's the Frontera Grill guy and I've never had anything from there that wasn't amazing.
And, Pork Tinga is also really really easy to make.
Here's the slow cooker recipe off Bayless' Frontera site.
Here's a quicker recipe from him as well off Food and Wine.
Or you can just read the rest of this post (I messed with it a little by upping the good parts and making this enough for probably 8-10 servings).
Here's the stuff you need:
Your biggest cast iron frying pan and the same pot you use to make spaghetti sauce.
About a 2.5 lb. boneless pork shoulder cut into 1 1/2" cubes. Try to find a lean one, but if there's a little fat on there, well, that's flavor.
A quarter teaspoon of dried marjoram and the same of dried thyme.
3 bay leaves.
A pound of potatoes scrubbed with the skin on and chopped into quarter inch bits.
About a half pound of fresh (as in uncooked) chorizo with the casing removed.
A big onion - Spanish or yellow or whatever - chopped.
Couple cloves of garlic, minced.
The big 28 oz can of stewed or peeled Italian tomatoes, drained and chopped.
A dash of sugar to knock the tomato down a notch.
And get 2 of those little 7 oz cans of chipotle peppers in adobo sauce. You'll only use 4 of the peppers, but you'll need 6-8 teaspoons of the adobo sauce the chilis are marinating in.
Chop the peppers up and you can take the seeds out but why?
And in the end you'll chop up a couple avocados and perhaps some grated cheese to put on top, and a big stack of those smallish tortillas.

Okay, put the pork in a pot of 5 cups of water with the marjoram and thyme and bay leaves, bring it to a boil, then turn it down and let it simmer for 45 minutes. Then take the pork out with a slotted spoon and put it on a plate to cool. Skim fat off the broth and save a couple cups.
In the giant frying pan, heat the oil and cook the chorizo. It'll be a weird consistency, so just keep chopping it with your spatula and try to make little bits out sausage out of it, and after about 10 minutes pull it out of the pan.
See that deep red juice? Good stuff.
Now put the onion and pork in the pan and cook that for 10.
Since nobody likes to clean dishes, instead of boiling the spuds just put the pile of chopped pieces on a paper plate and microblast for 2-3 minutes on high.
Then add pretty much everything to the pork and onions - garlic, tomatoes, potatoes, chorizo, chopped chipotles and the adobo sauce - and cook for another 5 or so.
Your house should smell amazing.
Then add the 2 cups of reserved broth and let that simmer for 10 and you're just about ready to go.
That shoulda been about an hour and a half, but you were next to the fridge which had the cold ones in it, right?
Chop up the avocados and heat up the tortillas and yell out "PORK TEEEEENGA".
People will come.
Grab a bowl and a beer (get Tecate - they have awesome retro cans currently from the 60's).
It's time to watch some football.

I'll see you guys next year, and it'll be time to start talking about baseball again.
Oh, here's what it really looks like, that Tinga. 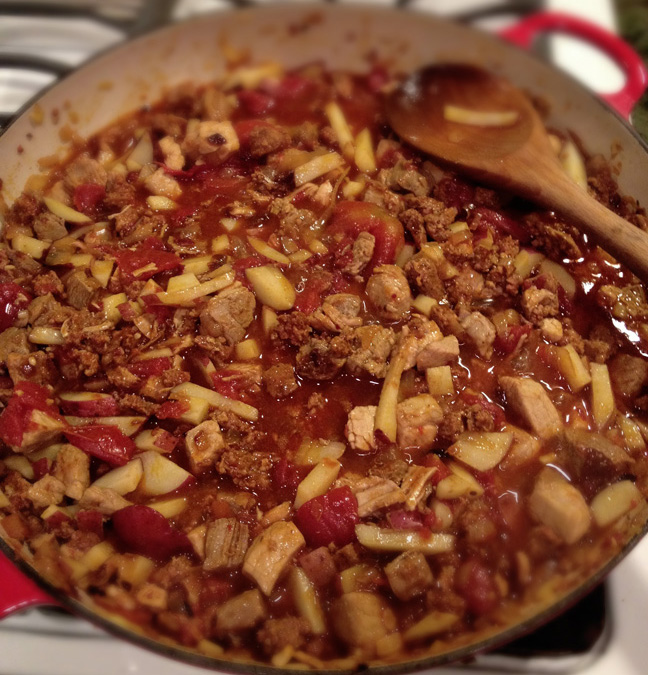 Lovie Smith's job is hanging by the thread Bear Fans are trying to cut.

Man, a while ago I thought the idea of Lovie Smith actually losing his job was SO far out of reality's bounds that it couldn't happen this year.
But have you talked about this with other Bear Fans?
Me too.
They are MAD!
They want change.
I even heard Doug Buffone on the Score say (this isn't exact by any stretch) that he wanted the Bears to beat Detroit so they could get into the playoffs and (lose!) see what (lose!) happens (lose!) when the Bears (lose!) play a top caliber team.
I still think, even if they lose today (which I have a horrible fear of, btw), Lovie hangs onto his job until Phil Emery has a plan for something better.
This season, even though it's gone to hell, is still being played by Jerry's (Angelo) Kids.
Sure Lovie was part of all the drafting, but I will always blame the turd years (including this one) on Angelo.
And look around at the other teams.
How many coaching vacancies will there be?
Tons.
There will be a mad scramble to fill those positions, and the Bears - didn't it take about 5 years to just get a new offensive coordinator? (yeah, I know, nobody wants to offensively coordinate for Lovie)
They'll end up last in line and we'll have a situation like poor Illinois ended up in when they just had to hire a warm body.
I expect Lovie to get a new short contract so he's not a lame duck for next year, and for Emery to plan something for a head coaching change.
In the meantime, I'm going to watch this game and pray Cutler isn't killed by Ndamukong Suh.
Because... don't you think you're watching this happen: Jim Schwartz is the new Forrest Gregg and Suh the new Charles Martin.
In '86 the Packers were 4-12, and today the Lions are 4-11.
So I just hope Cutler doesn't play the McMahon role today.

Make a New Beer Resolution for 2013 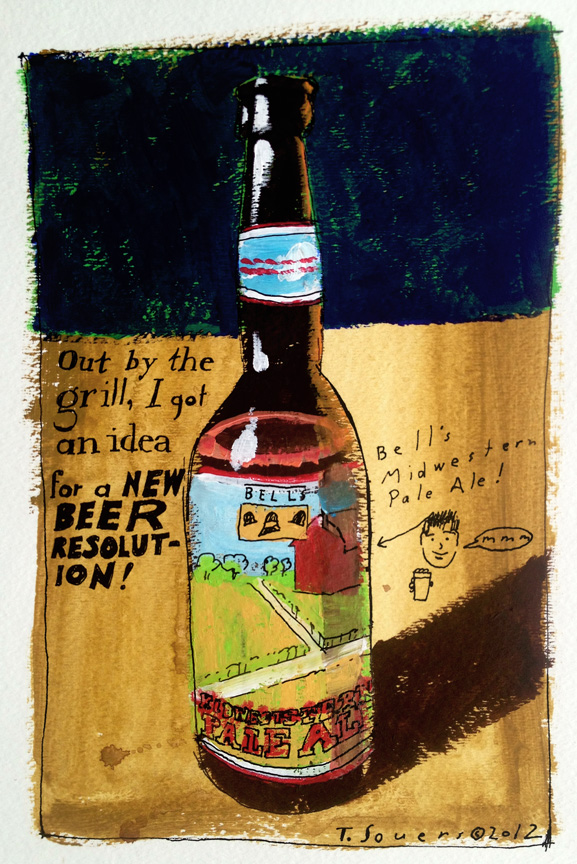 I hate new year's resolutions for the simple fact that I've never kept a single one.
So this year I'm going to try and make it a fun challenge.
A New Beer Resolution.
It's so simple: whenever I see a new beer, that's the one I'll have.

A strange and wonderful thing happened at my grocery store earlier this year.
Where there was once just a wall of The Same Beers, there was suddenly a wall of incredible crafty local and not so local smaller batch beer choices with amazing and different tastes and awesome bottle graphics.
It's not like I hadn't been sampling for years, it was just suddenly in the grocery store.
There isn't a Binny's anywhere near me, so this was true progress.

I first had a Bell's Amber at Jake's Pub on Clark probably 15 years ago.
Amazing beer... now in the grocery store... yada yada...
And one day I was coming out of Optimus, which is this great post production place where we do lots of film stuff, and right there on East Grand Avenue I see this Bell's truck: 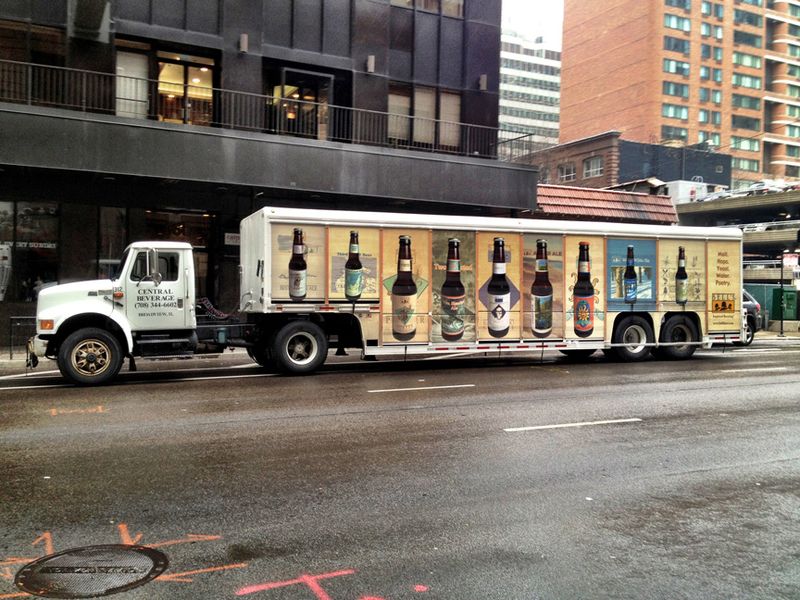 And perhaps coincidentally or maybe not, I see a new Bell's at Jewel - a Midwestern Pale Ale with a barn on the label!
Later, I had one out by the grill, which was when I kinda got this resolution idea.
And this example is one where that line of thinking really pays off, because Midwestern Pale Ale is deelish (and already gone - maybe it was just available in the Fall or something).

Because I'm now certain that I'll do more of these "new beer" posts, I might take a beer class and learn to really talk the language and say "hoppy" or "bitter" or whatever.

Kinda like being a Cub Fan and learning to say, "OPS" or "Hisanori Takahashi".
He's the newest Cub, by the way.
God.
How much do you miss Haray Caray?
Anyway, read about Takahashi here at MLBTR.

And later today or tonight is maybe a good time to get some practice in on your New Beer Resolution.
Because you know it's a good idea.
For a resolution, that is.

I added this later because I just read it and it's such a great article.
Read about Cubs' shortstops by John Arguello over at The Cubs Den - he's doing position by position analysis.
You'll feel so much better.

What's under the Cubs' tree? (and Happy Holidays to you) 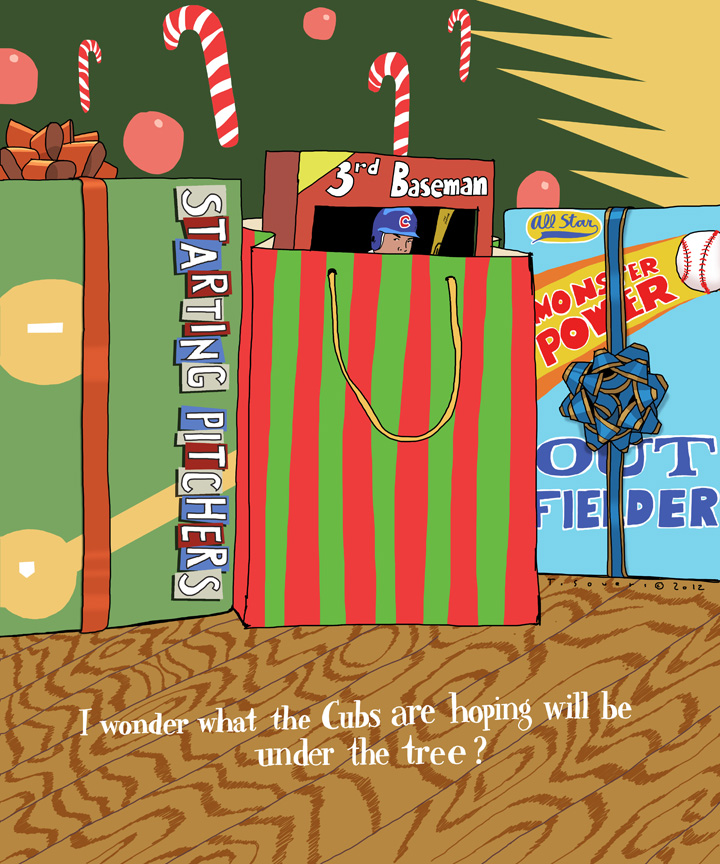 Did this for the latest Vine Line.
And it's so insane at my house right now I got nothin' else for ya except to say Happy Holidays and thank you all so much for visiting the blog.

Thanks Theo and Jed, and here's a Free "Thank You" Gif for everyone.

You guys know this is a full-service blog, right?
Drag that flashy "thank you" gif off that full-service blog and onto your desktop.
Now it's an icon.
You can put it in a "thank you" email with the instructions to "drag the icon to your browser".
When whoever you sent it to does that, a blank web page will come up with just the gif on it, and it'll play just like it does here.
It's the gif that keeps on giving, not unlike our fearless Cubs' brass with the signing of all the relatively inexpensive pitching gambles and not-so gambles.
Do I expect some of these new guys to be Paul Maholms and scram for other teams around July?
Yep.
But now, they'll go into '13 fielding a team that should be waaaaaay more watchable than the team we had to watch last August.
Jeff Samardzija, Matt Garza, Travis Wood, Edwin Jackson, Carlos Villanueva, Scott Baker and Scott Feldman.
And don't forget about Kyugi Fukijawa.
They didn't break the bank, and while we may get tired of hearing "low cost/high upside" after awhile, it's way better than"Justin Germano" or "Koyie Hill".
They also signed Nate Shierholtz to sort of take over for Bryan LaHair and play some right field so David DeJesus can go play some center.
So, none of this makes you screech with excitement, but they're creating a team and keeping their eyes on the prize and that's exactly what we should be expecting.