It's Halloween. What candy should the good Cub Fan give?

This gif.
I coulda gone on forever.
I mean, it's obvious what to give Jeff Samardzija, Ian Stewart, Dan Vogelbach, Anthony Rizzo, Bryan LaHair, and Alfonso Soriano, but...
Who should get a Payday?
Who should have gotten Charlie Brown's rock?
The apple with the razor blade?
Whoppers (my all-time fav)?

Funniest Tweet of the 2012 World Series came from a Cub Fan. 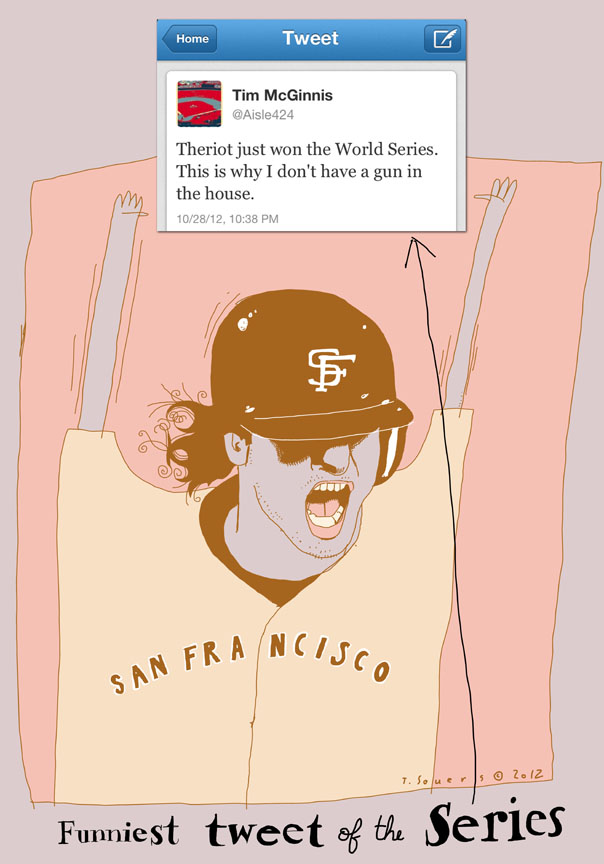 If you follow enough of the right people on Twitter, you can turn off the sound and just read.
God knows, I heard enough Tim McCarver and Joe Buck.
So Ryan Theriot was the DH last night.
Think about that.
And sure enough he gets a hit in the most crucial 10th.
He gets bunted to 2nd.
I wanted the Giants to win, but as a Cub Fan all I could think of was how hilarious it would be if Theriot gets picked off.

Marco Super Freaking Human Scutaro hits a liner to center and Theriot scoots all the way around, slides into home plate, and comes up with the WAY over the top victory yell (we all know how aware of the camera he is).

And then...The Tweet.
I fell on the floor, laughing.
I turned off the tv.
The Tigers still have another bat, but you know it's over.

Giants sweep.
2012 is in the books.
And now we get to start watching the clock again, just waiting for baseball...

Tim writes over at Obstructed View, by the way.
Funny guy. 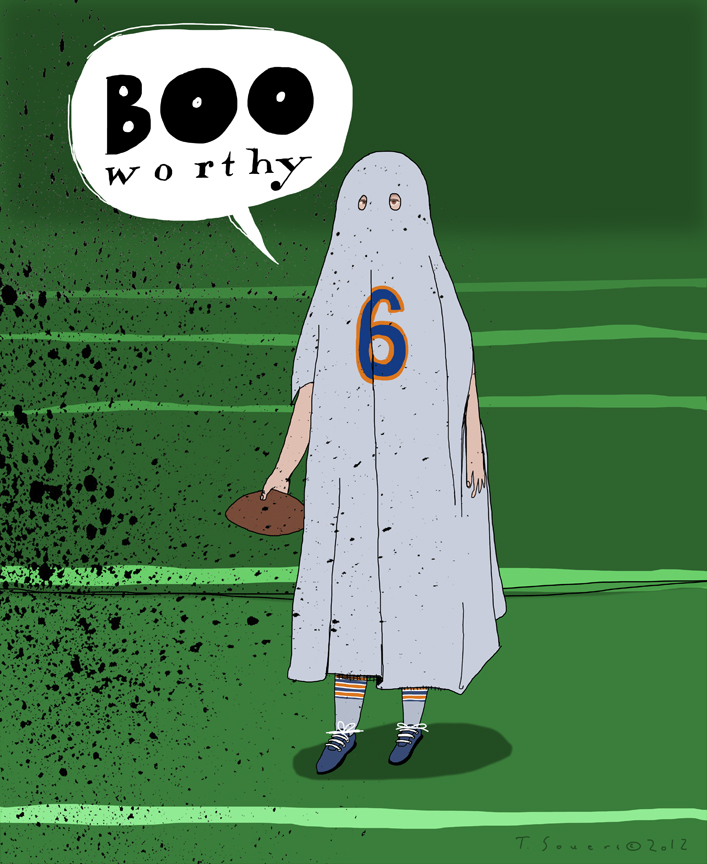 If you heard Jay Cutler after the game, you know what this is about.
I like him.
I don't believe he's ever had anything you could remotely call a line around him.
He's like a tackling dummy half the time.
6 sacks?
He was pretty straightforward afterwards in his assessment of the game.
"Booworthy."
So timely with Halloween upon us.
Thank GOD the Bears pulled this one out. 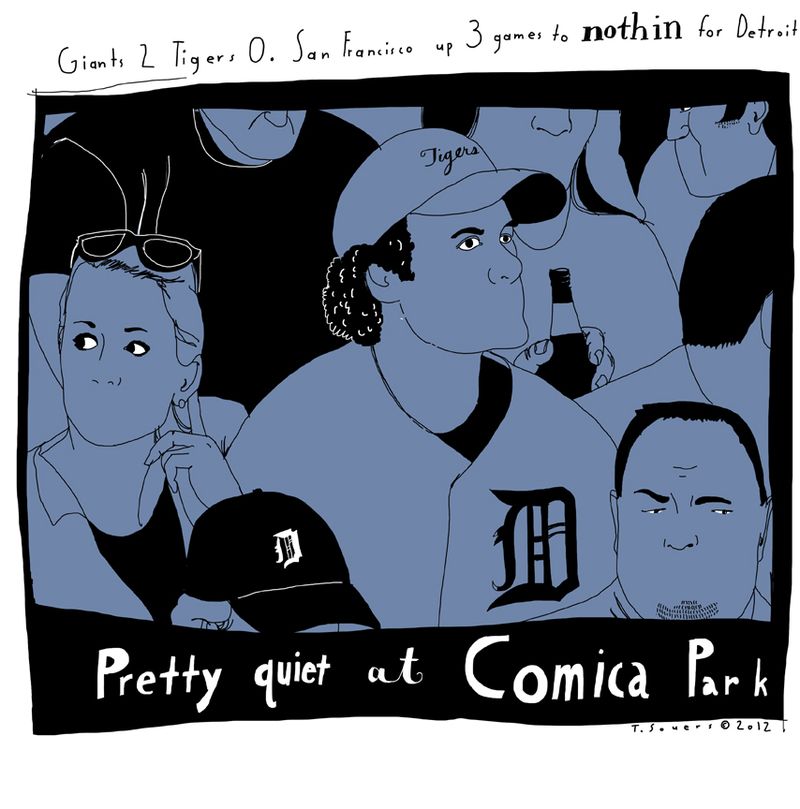 It's awful when your big guns turn out to be duds.
In the 1st, you thought the Tigers might get to Ryan Vogelsong early.
But Prince Fielder GIDPd with guys on 1st and 2nd.
Then Triple Crown winner Miguel Cabrera pooped out with the bases loaded in the 5th.
And Tiger starter Anibal Sanchez just had a bad inning in the 2nd, threw I think over 40 pitches, and gave up the two runs.

The rest of this game was spent listening to Drone and Babble (that would be McCarver and Buck).
Because the crowd was pretty quiet.
Sounded like the entire crowd at Comerica - reminded me of '08 at Wrigley.
Stunned silence.

Now if you look at the WS schedule, the last three games say "if necessary".

Hmm.
What else is going on today?
You know what?
I can't stand this Bears v Panthers game.
It's opposite team day - the Bears have one loss and the Panthers have one win.
The Bears should be up so big they should be able to take out Cutler and Forte out for the second half, right?
Because they should score easily and with Cam Newton gone all goofy, the Bears D should have no problems.

That's why I hate these games.
I'd so much rather they be playing the Vikings or Detroit.
Games that matter more.

Lastly, I heard Ditka talking on the radio yesterday and he's just such a treasure.
Patriots owner Robert Kraft said London should have their own football team, and they asked Ditka what he thought.
And to put it mildly, I guess you could say old Mike thinks it's an American sport that ought to be played on American soil.

The Detroit Tigers are in a Monty Python movie

When you start off the World Series with not only your biggest stud pitcher, but about the biggest stud pitcher in all baseball, and he gets the snot beat out of him?
Not good.
And then in game two, you manage only 2 hits and no runs?
Yep, you're just like the Black Knight in "Monty Python and the Holy Grail" after he gets both his arms chopped off.

That would be the exact position the Detroit Tigers find themselves in after getting CREAMED in game one with Justin Verlander getting pinged again and again, and then having San Francicso Giant starter Madison Bumgarner just shut 'em down in game 2.

I know it moved to Detroit and the home field thing and yeah, anything can happen - but the collective confidence/mojo/psyche of the Tigers can't be all that up, you know?
And tonight's Giant starter Ryan Vogelsong made some pretty loud bats from St. Louis go pretty quiet.

I have a feeling the Tigers are gonna be standing on just one leg at the end of tonight's game.

God, I love that movie.

Pablo Sandoval's 3 dingers. Give a big hand for Panda. 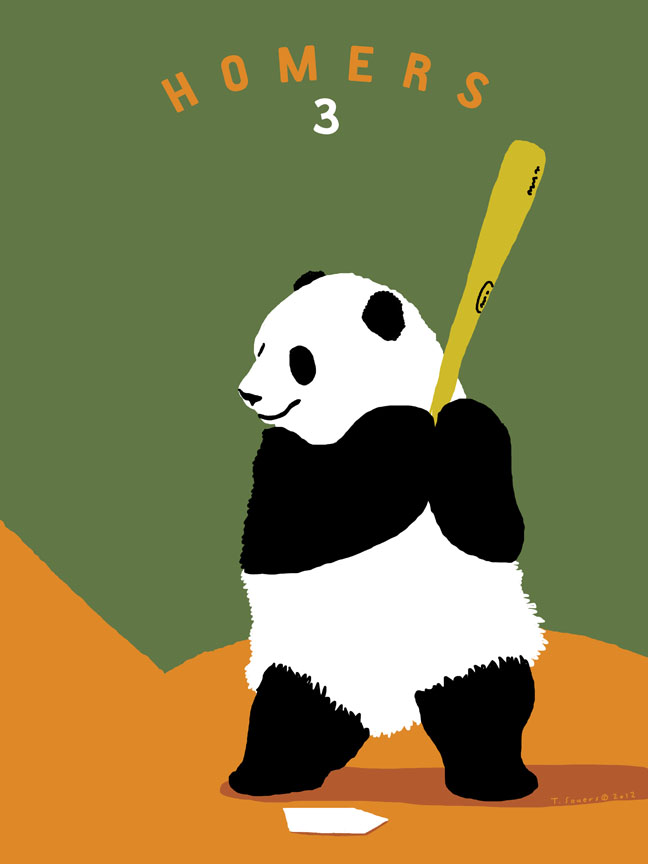 3 home runs in the first game of the 2012 World Series for Pablo Sandoval.
You already heard he's in the room with Babe Ruth, Reggie Jackson and Prince Albert.
Impossible.
History.
He's gotta be the happiest man in the country.
Meanwhile, in the other dugout...
Justin Verlander melts down.
We get the added bonus of watching Jose Valverde come in for one out of the 7th and give up 4 hits and 2 runs.
Giants 8 Tigers 3.
Nice.