Well, the good news is 2012 is almost over for the Chicago Cubs.
Probably I was one of about 47 people who watched last night's 2-8 Cub-drubbing by Arizona.
I mean, I watched but it was unwatchable.
I googled "Cubs tv ratings" and the newest article (the Sherman Report) is from August 31st.
It says White Sox games rule tv in Chicago (yada yada whatever dude), but worse is that the guy compared the 2008 numbers with this year's.
It's a drop of 62%.
In your basic world of tv, that "Cubs" show would get cancelled.
Now, I'm still totally for the Theo Plan, and the minors are seriously, truly, amazingly looking up (see Cubs Den).
But damn, if I'm Tom Ricketts I'm pretty worried about income for next year.
Bad business, bad mojo, bad everything.
The Jed Hoyer quotes about having money to spend on some free agentry (pitching) for next year, that can't be a lie because the product at Wrigley Field has to improve.
A handful of 2-year Paul Maholm-types, a handful of Shawn Camps...
This season HAS to be the Cubs hitting rock bottom (isn't a hundred losses enough?), and next year we HAVE to see some kind of progress.
Or who's gonna watch?

If everything aligns in my crazy current schedule, I'll be at Wrigley on Tues nite against the (I Hate The) Astros.
That would be only game number three for me this year.
And I'm kind of a big fan.

Here's to Darwin Barney, a new Cub in the record book. 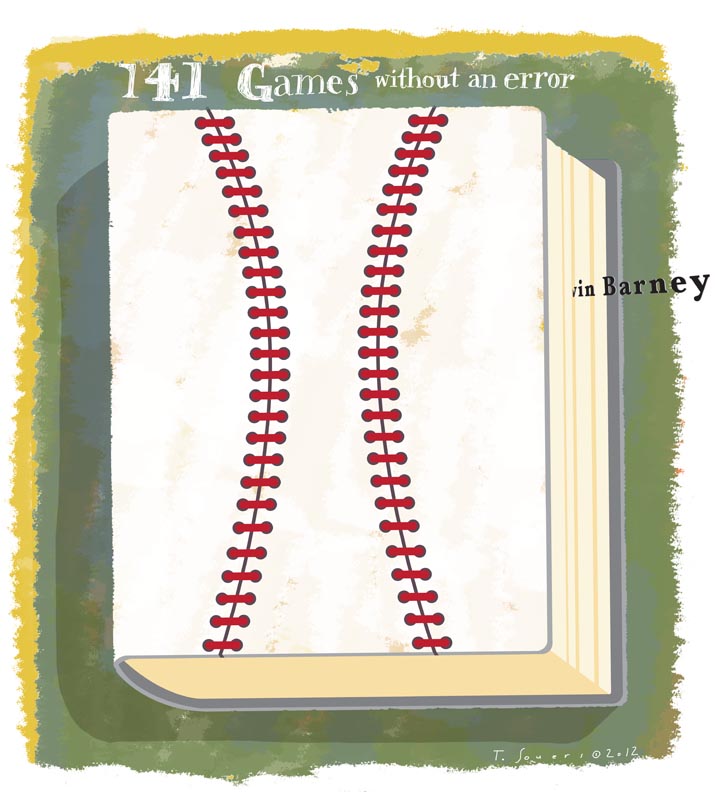 You know what?
Baseball is a funny game.
Which is exactly what Darwin Barney said shortly after his errorless streak ended on Friday night.
Yeah, it's a shame he just tied it, but any way you want to talk about it, 141 games without an error is plain old astonishing.
And one of the few honest-to-God bright spots we have for this awful year of ball in the Bigs.

So he's in the record books next to Placido Polanco, with something like "2nd base, single season errorless streak, 141 games" written behind them.

Of course this all happened in loss number 98 for our '12 Cubs, with 5 games to go.
Whatever, I think we all knew this was gonna happen back around early June.
Trying?
Yep.

Which segue's nicely into my little bit on jury duty.
I found out that there are different kinds...
Last September I had to go, I got chosen to sit on a jury in a civil case, I spent 2 days and we found the guy suing the other guy to be a liar.
Then I went home with a certificate and a guarantee that I'd done my American Duty for a year.
So this last September when I got a summons in the mail, I tossed it.
Hadn't been a year yet.
Then one day I got a call from my wife saying we were in danger of being fined (I think it was $1500) if I didn't call and straighten out this obvious misunderstanding with our government.
So I called, and I was a little short with the woman who I spoke with.
I think I may have said something like, "Why are you pestering me.."
The lady wasn't happy with my tone, and that's when I found out there's different kinds of jury duty.
And I had to play ball or risk that fine.
Here are the rules to this one.
Last Sunday night I had to call a number to find out if I had to show on Monday.
If the message said no, then I had to call again on Monday night to see if I had to show on Tuesday.
And that goes on for 2 weeks.

But I had to go in on Monday.
About maybe 50-60 people go into a room, we're handed a brief description of what the crime is.
Conspiring to possess and intent to distribute marijuana.
Then, we fill out a questionnaire that opens with questions like "where do you work?" and "how long you lived here?" and closes with questions about your life's experiences with drugs. "Do you know anyone who's been arrested for drugs" and stuff like that.
We were then led to a courtroom, the judge sat everyone in a certain order, and he went through each questionnaire with each person.
If there was something of a personal nature that the judge wanted to know about, he saved it for a sidebar later.
I got there at 8:30, this part got done about 12:30.
An hour for lunch.
Then the sidebars with personal questions.
They put on a white noise machine so no one can hear the conversation, and you had to go to the front of the courtroom where all the lawyers eyeballed me as the judge asked away.
About 4 he called off 14 names - 12 jurors and 2 alts.
I wasn't one.
I know if I was on the jury, I'd be sworn to not talk about the case.
But since I wasn't I guess I can say the case was about a little matter of 11 tons of pot.
How long you think that trial's gonna last?
What kind of organization is involved in something that big?
I am SO glad they didn't call my name.

Anyway, I have another week of calling in.
This morning I was riding my bike and a black cat did a textbook crossing of my path.
So I'm kind of freaking out.

I can't quite make out what that is, can you?
It must be significant, though, right?
I mean, otherwise...why would it show up here, on a Cubs blog?
Pretty freaky.
I hope it never comes into focus.
Maybe it's a...message from another dimension trying to break through.
Like "Poltergeist".
LEEOH?
Leo Durocher?
Is that you?
Weren't you the manager of the Cubs in 1966, when they lost 103 games - the last time they lost over a hundred games?
HALLOWEEN IS STILL A MONTH OFF!

On a related note, the Cubs lost their 97th game Wednesday.
To the Colorado Rockies, who have lost 94 games this year.
Wow.
PS: That movie haunts me to this day.

Can Cubs Dave Sappelt ever really take the place of Reed Johnson?

But the beard thing - jury will be out on that for awhile.

The hole in the ground outdoor smoker.

Saw some of the rainy Cubs vs Rockies game last night.
Dave Sappelt's first dinger of his ML career was a monster, Starlin Castro hit his 14th, 25 year old Chris Rusin wouldn't appear to have a future in the bigs, and if the Cubs go .500 for the rest of the season they'll finish with 99 losses, but whatever.

You know what's fun?
Cooking with improvised stuff and having it turn out fantastic.
We had 5 guys on a fishing trip up at Lake Powell.
I bought about a 4 pound pork roast (that's not big at all, really) with a nice side of fat on it, and coated it with Tony Chachere's Creole Seasoning.
(Lots of times I'll grind spices and herbs and go from dry rub recipe books, but the rest of the time I use this stuff, on anything, because it's awesome.)
We put that in the bottom of the food cooler knowing we'd cook it in about 3 days.

About noon that thrid day, I dug a hole and made it into a kind of smoker.
Here's what I had:
A galvanized steel tub from the hardware store (it's the top of your smoker and as an added bonus will hold all the supplies), a small grill lifted from a toolbox-sized Weber (round would be better), aluminum foil, a shovel, some charcoal and hickory chips. 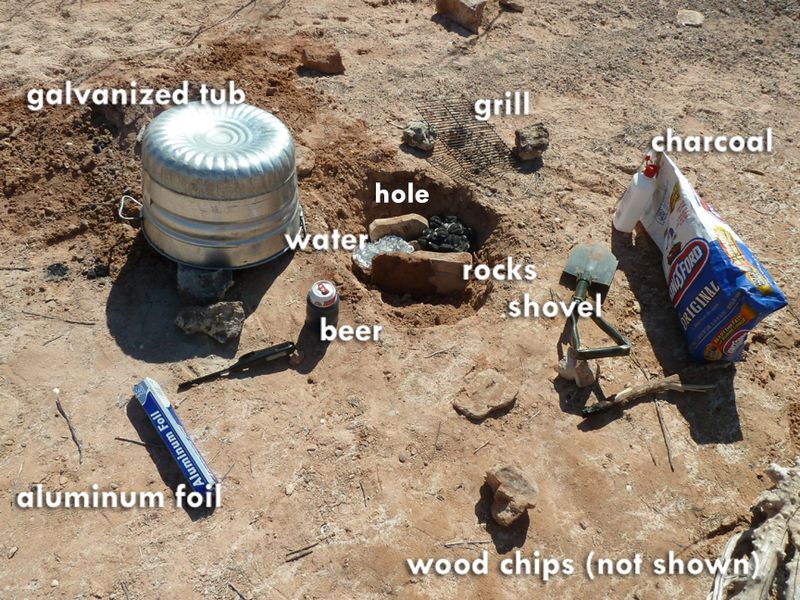 Recipe for smoker:
1) Soak a couple handfuls of wood chips in water.
2) Open a beer. Dig a hole about the same circumference as your galvanized tub. Doesn't have to be real deep, maybe a foot and a half or two.
3) Line the bottom with gravel (so when you put the charcoal in, it'll be able to breathe a little).
4) Find rocks or bring a couple bricks (this was Lake Powell, which has sandstone all over), and these will be used to rest the grill on, so you want them to be even in height inside the hole.
5) Pour some charcoal in on one side. I didn't use a whole lot (maybe a quarter of a bag) because when we're done with it we'll seal it as best we can and NEVER EVEN THINK OF OPENING IT for about 6 hours.
6) Make a foil "boat" and fill it with water, and put that on the side opposite the charcoal. This'll help keep the meat from drying out. 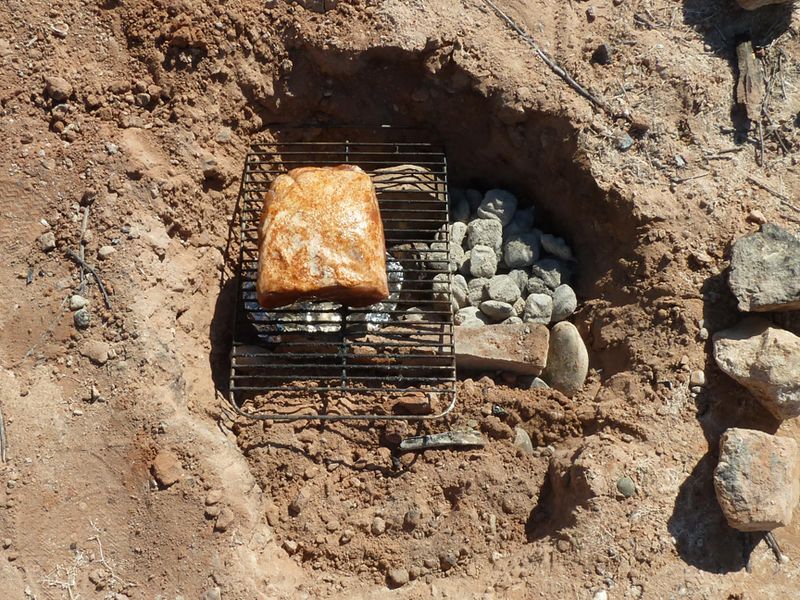 7) Light the fire and wait for the coals to turn all white.
8) Lay the grill on the rocks, and put the meat on the grill fat side up so it melts during the cooking process.
9) Throw the soaked wood chips on the fire and put the galvanized tub on (note - there are no holes punched in the tub - all sealed) 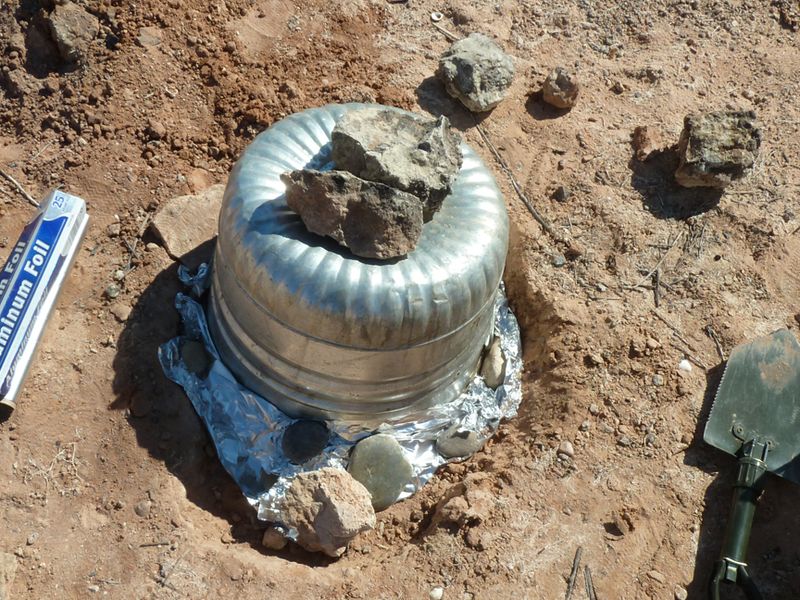 10) Carefully put the tub on top, and try to seal the sides with foil.
11) Put some rocks on top to keep the tub from blowing and any animals out.
12) Read a book, listen to a Cubs game (we couldn't), do something like...jump in a boat and go catch a couple bass. Or if you're like me, just sit in the boat while constantly throwing cast after cast into the only water around the boat that apparently has no fish while everyone else catches all the fish they want.

13) Come back about 6 hours later. When you touch the metal of the tub, it won't be hot enough to burn, but your meat will be done. 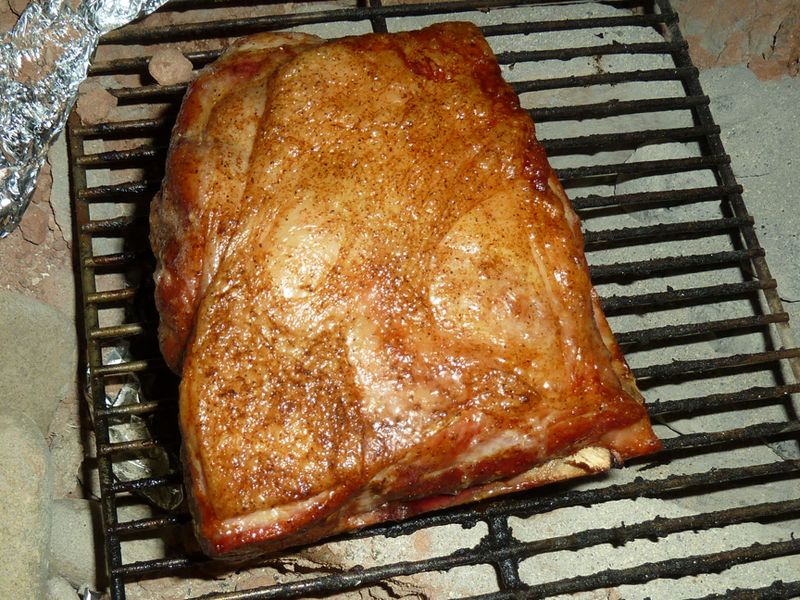 It didn't turn out to be tender enough to make pulled pork, but still kinda amazing.
Put some slices on a bun and stick some cole slaw on top.
Pop a beer and kick back in an official Chicago Bears tailgate folding chair, and imagine how life could possibly get better.

Bears Fan reaction to The Bad Call on MNF that hosed the Packers. (cartoon gif)

Seriously.
What a travesty.
Just a horrible, HORRible call.
The National Football League is losing it's relevance, meaning, and dignity with their continued use of temporary, unqualified refs.
Unfair.
Unthinkable.
Unwatchable.
How awful for those Green Bay Packers.