What if Theo Epstein and Ned Colletti did a "Whassup?" commercial? (gif)

Yeah, I know this story was all about a "serious" breach of conduct.
Dodger GM Ned Colletti accused the Cubs of allowing Ryan Dempster to listen in on some of the phone chatter going on while the Cubs were attempting to trade Dempster to the Dodgers.
And of course Jed Hoyer and Theo Epstein denied.
And I know it's a touchy subject since tons of Cub Fans got really mad at Dempster...yada yada.
I didn't want to bring that up again, just this "listening in" part.
Because that part I found kinda funny.
Did it happen?
I don't know.
I don't even know how or why it morphed into an old commercial here, but whatever - I hope you laughed.

If you wanna talk about the game yesterday, it's kind of similar to other Cub games.
The ones where the wrong team gets more runs than the Cubs.
That young Travis Wood looked pretty dang good, though.
Against his old team the Cincinnati Reds, too.
Held 'em to one measly run when he handed the ball and a one run lead over to James Russel in the bottom of the 8th.
Then?
What was that inning anyway?
The sun's going down and the big shadow comes across the field between Russel and the batters, which is a for-sure Cub advantage.
But the Reds got about 5 or 6 hits, and since the Reds couldn't really see the ball at all, each hit was some kind of accident.
Brandon Phillips' first swing - Len and Bob said it looked like he was swinging under water.
Like he never saw the ball at all.
Then when he hit one down the third base line, he may as well have had his eyes shut.
He even did a "how did that even happen" gesture running to first.

So, whatever, that's the kind of stuff that happens to the Cubs.

By the way, that's supposed to be Theo, Ned Colletti, Jed Hoyer, Ryan Dempster, Tom Ricketts and a dog in the gif. And if you're too young to remember the "Whassup" commercials, go here.

Anthony Rizzo and Devin Mesoraco: play at the plate (gif)

It's always my favorite play, the play at the plate.
And when Starlin Castro blasted one off the wall with Darwin Barney on 2nd and Anthony Rizzo on first, you knew it was gonna happen.
Not really that big an explosion, but still, if I'm Reds catcher Devin Mesoraco I'd be thinking about lots of stuff including Rizzo's size, the collision that's about to happen, holding onto the ball, and...my health.

Rizzo slid.
Safe.
Cubs end up winning on Alfonso Soriano's 2-run blast in the 8th.
Victory over the first place Reds.
Not that I'm supposed to care this year, but still.

Thanks San Diego. Always a pleasure. Love, the Cubs.

You know what?
I'm just gonna pretend that little crap road trip didn't happen.
At least for today because I'm tired of the constant nag of defeat.
Instead, I thought I'd put up these old Steve Garvey cartoons.
Because I'm such a HUGE fan. 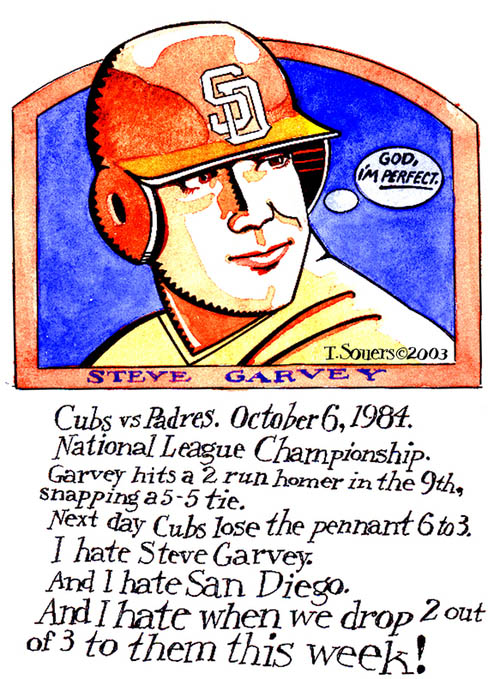 This one from a road trip where I found this ad featuring Steve Garvey as a hair replacement salesman.
Put me in the BEST mood. 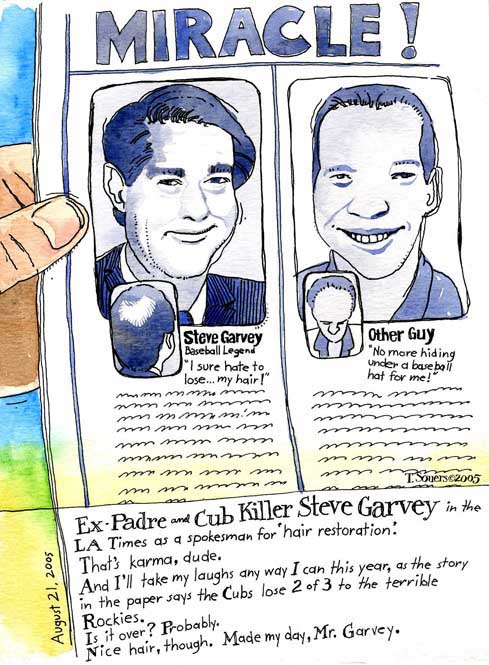 And lastly, this one felt SO AWESOME to paint, but we all know how this story ended for our favorite team. I can never win.

Today, the Reds come to Wrigley Field.
Interestingly, the Reds have won 66 games while the Cubs have lost 66 games.
If you ever saw "The Omen" you'll know that 4 sixes is almost the sign of the devil, which means I'll go out on a limb and predict more hell to come.

Well, there's a couple things that'll give you pause.
Brian Urlacher missed his 5th practice in a row, while Brett Jackson struck out 5 times in a row (going back to his first game).
Lovie Smith and Dale Sveum will try to calm the masses, but that stuff is out there.
Certainly injury is way more worrisome than a habit of striking out.
I've got huge expectations for the Bears this year, and none for the Cubs.
Anyway, these are the things that are lodged in my brain right now.
Sorry to add to your concern.

Well yeah, the Cubs ended up losing and getting swept, but that was an oddly satisfying game to watch.
Dale Sveum bat Brett Jackson 2nd, which was also odd, but anyway...with Jackson, Anthony Rizzo, Wellington Castillo, Starlin Castro and Darwin Barney (Josh Vitters will play soon, too) on the field all at the same time you sort of got to see what this new Cubs hullaballoo might be about.
The lead changed or tied 8 times, which gave the game an excitement you haven't seen in awhile and showed that the kids have given the Cubs some new kind of life.
Very nice!
I was watching at the Windsor over on Milwaukee with my buddy Brad and despite all the coolness, when we saw Carlos Marmol warming up we both decided to leave immediately.
There was a freshness to this game, and neither of us wanted to re-visit a same old story ending, which I guess happened with Shawn Camp on the mound anyway.

So...something to look forward to!
It'll completely crack me up if these kids get hot and the Cubs end up drafting way later than 1st.
I mean, these kids, they're not exactly strangers, right?
Oh wait, the pitching.
Forgot about that.

Cubs invent new ways to lose vs. the Dodgers.

Ouch.
Joe Mather had a rotten night with the glove.
I mean - PLENTY of effort, right?
But in the end you'll remember Matt Kemp saying he "had a little help" with his game-winning home run that bounced off Mather's glove like a mini-trampoline and then went over the fence.
Later, Mather would make another grand effort, diving at a line drive (can't remember who hit it) and having the ball stick for about .005 of a second, but then roll out.
Mather threw to second while sitting, then continued to sit there, looking at the grass and contemplating life as a Cub.

Chris Volstad pitched well enough to win.
That's actually a very encouraging thing to say.
All odds against him as he was up against Klayton Kershaw, he pretty much shut the Dodgers down for 7 innings.
Volstad is an enormous man, and he definitely has skills so you just hope he can figure out how to pitch.
More than any year ever, wins don't really mean a thing.
2012 is more like a big long spring training and I half expect the pitchers to say something like "I was working on my cutter today".
It would be nice for Volstad's head to get a win since he hasn't had one forever.
But, you know... no cigar.