Man oh man, what a crazy day.
Were they gonna trade Ryan Dempster?
To Los Angeles?
To the Yanks?
To...the Rangers?
My eyeballs were spinning in my head, my brain all atwitter.

What about Matt Garza?
How come Soriano is still here?
He turned down a trade to the Giants?
Is he nuts?
In the end it was just Dempster, going to the Rangers for a third base prospect named Christian Villanueva and a pitcher named Kyle Hendricks.

Crazy day.
I actually thought Theo was going to pull more trades, but...

So tonight against the PIrates we'll probably see Casey Coleman, and we'll see him every 5th day.
The days Dempster was supposed to start.

Don't fret, people.
Because more change will come.
That'll include more white flags with a blue W flapping in the wind, eventually. 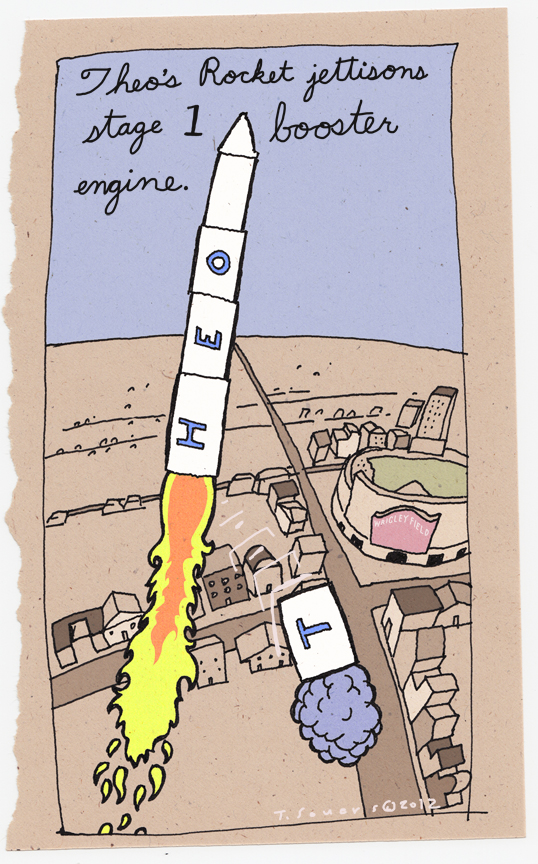 What happened?
I mean, I knew the trades absolutely had to start, didn't you?
But first, Darwin Barney hits the 3 run homer in the 4th so I'm thinking man that's awesome and weird.
Then Anthony Rizzo smokes one out for 3 more and now it's 7 to 2.
My doorbell rings and it's my neighbor who needed help in her back yard.
I come back and it's um...WHAT?
Starlin Castro hit one to about as dead center as you can get and Len and Bob are saying it's THIRTEEN TO TWO?
I forgot all about the trade deadline - it's already the weirdest night ever when the camera is now in the dugout focused on Geovany Soto, and he's literally hugging every dude around.
Oh yeah.
Twitter has gone crazy, and I see Johnson's been traded to we don't know who, and now it's Geo.
And in a couple minutes I find out about Paul Maholm.
He and Reed to the Braves, while Geo goes to Texas.
Yep, you can't help but develop a little attachment to Cubs, although Maholm - we hardly knew ya.
But finally it feels like Theo Epstein's plan has begun.
Kinda like the Cubs are Theo's Rocket, and that first booster engine is in the process of being jettisoned.
It's not done yet, there's still time for trades and nobody thinks Ryan Dempster will make his scheduled start tonight and the Yankees and Rangers have interest besides the Dodgers.

Wacky and oddly exciting to watch.
I mean, this isn't just Mike Fontenot getting traded to the Giants.
It's the beginning of change on a massive scale, and more than anything what have you been missing?
Hope.

Don't you feel that trickling back into your brain?
Weird but true.

Oh yeah, and the Cubs won.

Anthony Rizzo did this thing against the St. Louis Cardinals yesterday.
There's a name for it, can't really remember.
But it was super cool and the Cubs won 4 to 2 in 10.
Take the series.
Act like pros.
Awesome.
This Anthony Rizzo guy - kind of exciting, no? 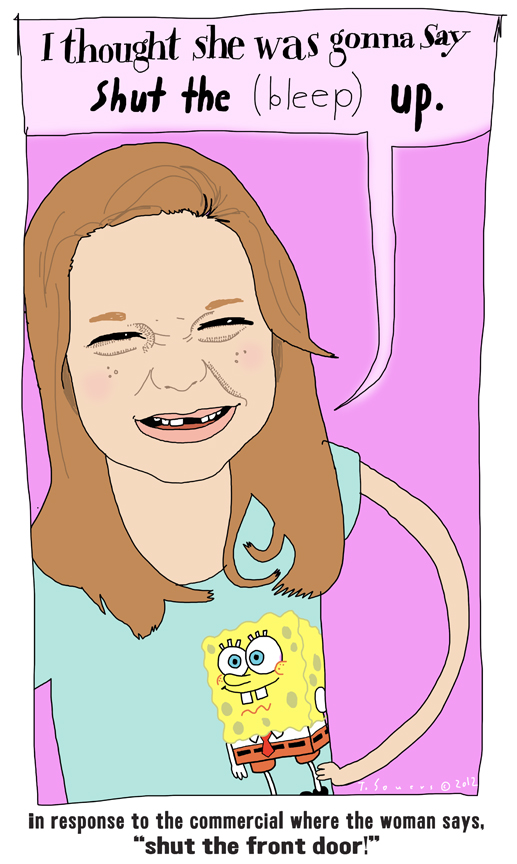 I have a good buddy who's a dad with a young daughter.
They were watching tv when this commercial comes on and a woman says, "Shut the front door!"
And for the first time during her young life, Dad hears what I drew in the cartoon.
Jaws drop, panic sets in, where could she have heard such a thing?
In their house, the kind of language that flies around my house doesn't happen.
But when Dad told me the story, well, couldn't help but laugh.

Anyway, you know I'm super busy - I didn't even have the game on the radio.
Later somebody told me Reed Johnson dropped a perfect bunt with guys on 1st and 3rd and two outs to score Tony Campana, and the Cubs hold off the Cardinals to win 3-2!
I said, "SHUT THE FRONT DOOR!"
Jeff Samardzija walked a bunch of guys but only gave up the 2 runs.
That's pretty much all I need to hear, and I hope that somewhere Tony LaRussa was watching!

It's July 29th, the trade deadline is the 31st.
It's liable to be a whole different team in a couple days, so get ready.

Travis Wood is having a rough go, almost breaks record. 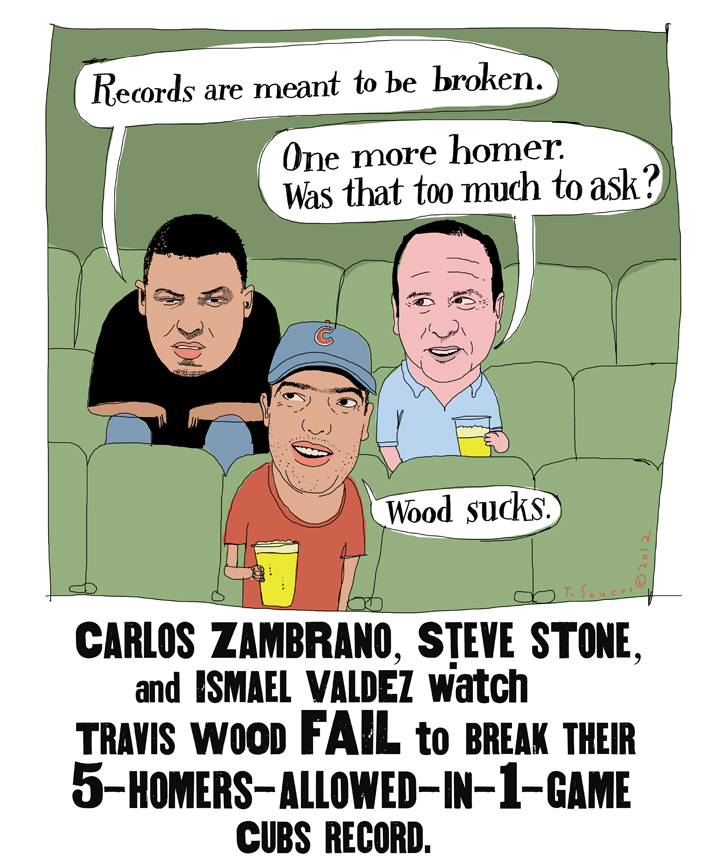 Ahhh boy.
Travis Wood allowed a home run in each of the first 5 innings of yesterdays latest loss to the St. Louis Cardinals, this one 6 to 9.
That tied some kind of record with the 5 consecutive innings, but it also tied a more personal Cubs' record of 5 homers allowed in the same game by a single pitcher.
The others were Carlos Zambrano, Ismael Valdez, Steve Stone, and Warren Hacker (who pitched for the Cubs from 1948 - 1956.

Unfortunately, the last post I did on young Mr. Wood was kind of the same subject.

But there were signs of life yesterday, and the Cubs did score more runs than in the entire last series so, you know, not bad for this year.
Anthony Rizzo, he looks like he puts about as much effort in his swing as it takes me to hit this X key.
Ready?
X.
See how easy that was?
Only Rizzo's effort produces a number on the scoreboard at Wrigley and generates fabulous crowd excitement.

Next.
Ryan Dempster.
I decided to stop saying anything about whatever trade may or may not happen.
It's a never ending argument and all based on something someone else said.
I'll wait til either Theo or Demp are quoted directly.

Lastly, I gotta go to work.
See ya!

Despite the lack of meaning, can the Cubs PLEASE beat the Cardinals? 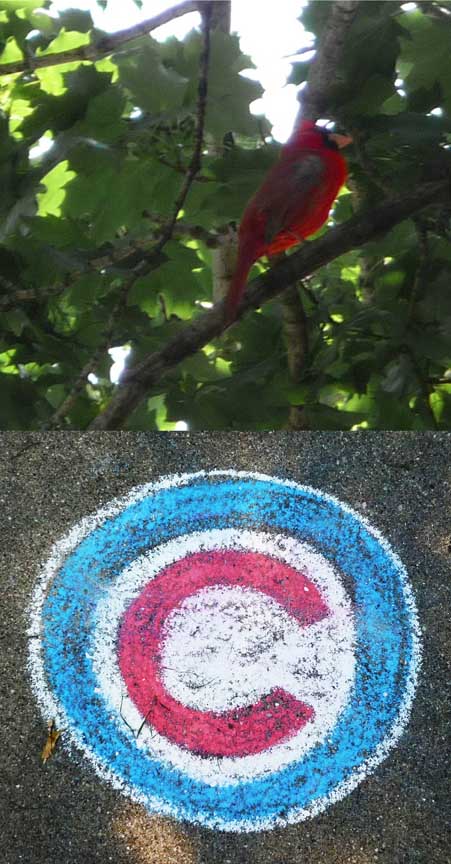 The story you are about to read is true.
The photograph above is merely a re-creation of the elements...
Last summer, for no reason whatsoever, I borrowed our neighbor's kid's sidewalk chalk and drew a Cubs logo.
On the sidewalk.
In the shade of this big tree in our front yard.
I'd just finished my little piece of art, and was about to stand up to admire the work when whistling past my ear came a small squishy projectile that landed a bit right of center.
I looked up.
There was a cardinal in the tree, and the little bastard had just taken a dump on my drawing.

Awhile back, I think I told you that the attitude of your basic Cardinal Fan any more is sort of like... the Cubs are a cute little pet.
A toy.
A source of amusement.

And while I was visiting their ballpark, there was literally nothing to be done for it.
The frickin' bird crapped on my drawing again and again, and I didn't even have a BB gun.

So even though in the grand scheme of things it means absolutely nothing (except perhaps a bump or fall in the standings in the Card's quest to catch the Pirates and Reds), CAN YOU CUBS PLEASE BE RESPECTABLE AGAINST WHAT USED TO BE YOUR MOST SIGNIFICANT RIVAL?
MAYBE DURING THE COURSE OF THE ENTIRE WEEKEND YOU CAN FIND IT IN YOURSELVES TO SCORE MORE THAN ONE RUN? SO THAT ON MONDAY I DON'T ATTEMPT TO TRY MY 3RD GRADE MATH SKILLS AND ADD THE RUNS THE CARDINALS SCORE AND DISCOVER THEY CROSSED THE PLATE 22 MORE TIMES THAN YOU DID?

Now, Ryan Dempster.
I did that last post just thinking I was making a funny and that he'd be traded by the end of the day, but man.
I've read some astonishing stuff where people feel that he may have misled the Cubs in talks leading up to this point in the trading season.
Like, really really angry.
In reality, nobody knows what Theo Epstein and Dempster talked about.
What we do know is that Dempster has earned the right to refuse a trade.
And of all the people... Dempster has been nothing but a stand up guy on crap teams who never once pointed a finger at anybody but himself even when it was clearly another part of the team that broke down and caused a loss.
His biggest failure came in the '08 playoffs.
Totally screwed the pooch.
And Ted Lilly never even threw a pitch.
Maybe Demp just wanted to go fix that, only with the Dodgers.
I DON'T KNOW.
But I'm not gonna be angry at him now or ever.

Finally, I lied.
About the bird up at the top.
I mean maaaaybe it was a cardinal - I have no idea.
Never saw it.
But what kind of a story would that be?