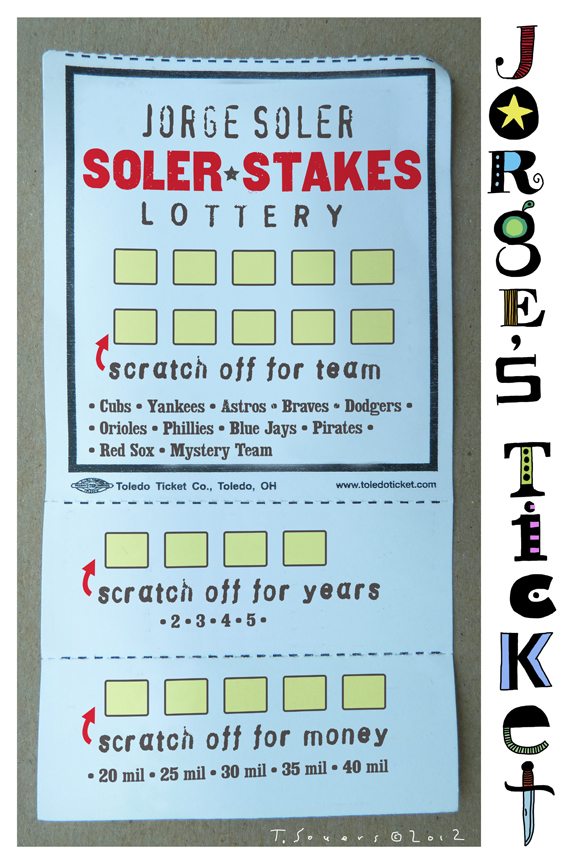 Man oh man is Jorge Soler lucky.
His lottery ticket is an automatic and enormous winner.
After July, teams will only be alotted $2.9 mil/year for international signings.
And if you go over, there's some really really bad penalties you have to pay.
So Soler - he's the last "bonus baby".
We all know the Cubs and the Yankees have big interest, but I also read alllll those other teams in the illustration do as well.
And there's always the mystery team that comes out of nowhere.
I do hope the Cubs get him, but we all gotta remember he just turned 20.
So he's not gonna get off a plane and come kick some MLB ass anytime real soon.
But still, in this kooky Epstein Future-World, signing him makes sense and you know, maybe he really does have 5 tools and turns into a monster.
Those guys will know.
How do I know that?
Well I don't.
But if I don't start with the basic premise that Theo Epstein and Co. are really smart, then I might as well go root for the Cardinals.
Right?
Okay, so the Cubs went and got a SECOND WIN for Ryan Dempster and beat the Minnesota Twins 8-2.
The losing has been so frequent and expected, I've just gotten used to it and haven't let it wreck the day.
But what a bonus to have an early win on a nice Sunday - kinda nice.

Ya see what you did? You made the next 20 hours or so suspenseful! I had completely forgotten about Soler, now I will spend all my waking hours wondering.

At least it is only for a day.

I LOVE that Toledo Ticket Company actually exists and that is their website!

Nice game today, though I managed to miss almost all of the Cubs scoring, but I watched the inning they did not score!! Ha!

Hi Rich,
Id forgotten about Soler too.
And for the art I took a picture of the parking receipt from the hotel Im at. Then Photoshop.
Couldnt bring myself to erase the Toledo Ticket Co.