I don't have time for an illustration today, sorry.
But if you were watching last night's game, you saw a couple plays you just wanna stick in the memory bank forever.
First was Starlin Castro's impossible diving stop (Castro Cubs.com vid here) of a ball that was simply past him.
No way he gets it.
He sort of caught up to it from behind and then you thought um...did I just accidentally blink and miss the part when he stood up, turned around, planted his feet and threw from right field to nail that Astro at first?
Because that isn't something that happens in normal life.
Goose-bumpy and impossible, that play.

And then there was Tony Campana (Cubs.com vid here).
He's on first, there's an attempted pickoff, the ball gets past weezy old Carlos Lee, and Tony takes off.
Meantime, the ball bounces off something and comes straight back to Lee who throws it to Astro 3rd baseman Matt Downs.
Campana is out by 20 feet, maybe more.
But what happens next...sometimes I wish the players all had helmet cams, because the view Down's had must have been incredible.
Campana running full speed right at him and suddenly, Campana flies.
Literally.
Takes off.
One was reminded of Walter Payton flying over a pile of tacklers.
He goes up over the tag, and when I say dives into the ground I mean literally.
Like off a diving board - his feet WAY up over his head and he lands...OH CRAP! He lands 4 feet past the bag.
Both he and Downs leap at the bag at the same time and Campana wins.
Safe.
The whole thing looked like something out of The Matrix.
Not really where bullets slow down but more like Campana just went into the 4th dimension about halfway to 3rd, and then popped back out 4 feet past the bag.

Did the Cubs win?
Nah.
So we're looking for any little thing that, you know, can make you smile.
Happened last night.

And Travis Wood, he takes Volstad's place and I don't know.
Maybe he really was too nervous before.
But he looked a million times better than earlier in the year, and hopefully he turns a negative into a positive.
Plus, he almost hit one out.

Okay tonight it's Jeff Samardzija vs. Wandy Rodriguez.
Please Cubs.
Another sweep won't be so good.

This is your brain on Cubs. 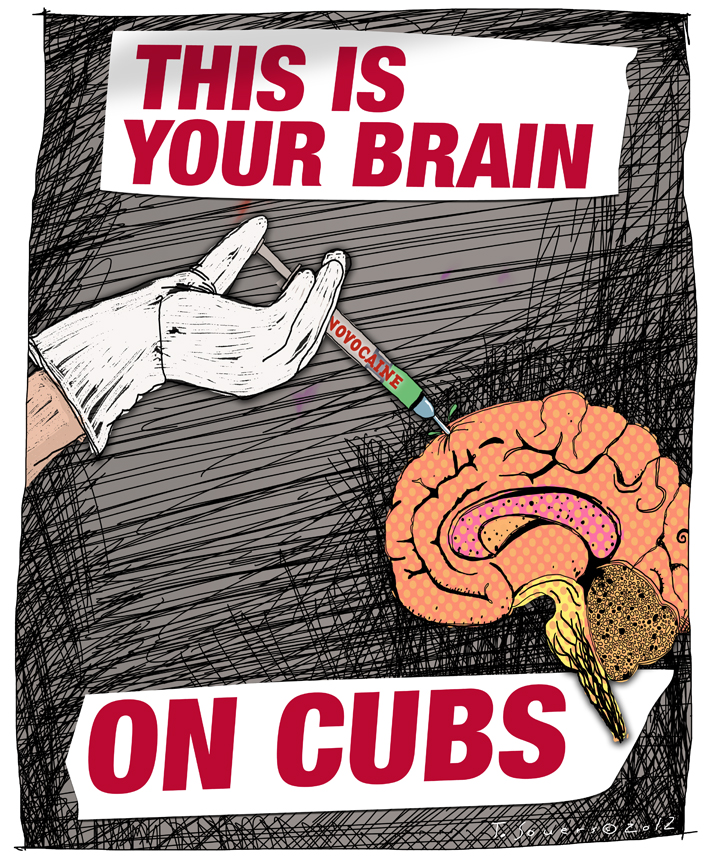 Repetitive.
Never-ending.
Mind-numbing.
Two 3-run homers off Matt Garza from guys I've never even heard of.
And they were Astros.
Guys, I figure we're going to go through this alot this season.
Extended losing streaks, nightmare losses, bullpen implosions (although Randy Wells looked pretty good last night).
It's not even June yet, so we'll just have to figure out a way to keep our collective sanity, keep plugging along, and keep our eyes on the horizon where there may be help this summer and if not well, there's the bigger prize coming some time before I die.
Take a minute to rant if you want, this is the place to do it.
But don't go buyin' no Brewer hats, okay?

Last thing.
Anthony Rizzo.
Whether he's ready to come up - I don't know.
But we should let Theo Epstein stick to his plan, bring him up when the Cubs can get maximum control and value from him.
Plus, he's already failed in the majors once.
Can you imagine the pressure on a kid, coming up and being expected to do well on this team?
In some ways, I'd say just forget about him this year.
On the other hand, maybe it's the perfect year to bring him up since nobody expects jack.
Maybe that actually reduces the pressure.
I don't know.
But I'll keep trying for laughs or rants or whatever just to keep sane.

Gardening, the Cubs, and the Tools of Ignorance. 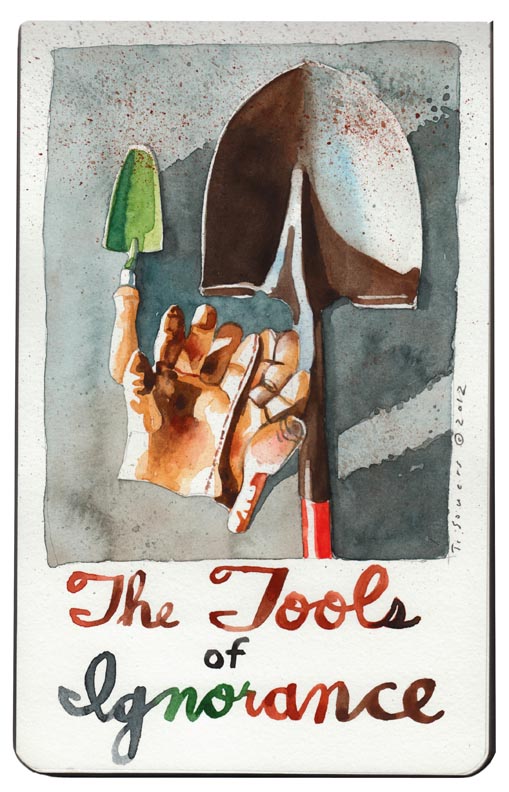 It's gorgeous out.
The Cubs are playing the Sox.
I have gardening tools, various plants (including tomatoes) in those grocery store plastic cartons, and icy cold Tecate.
Man, IT'S A PERFECT SUNDAY!
I also have a grovel mat - a rubber thingy I can kneel on while digging up the freaking weeds and turning dirt and stickin' plants in the ground.
Every year, I promise myself I'll use the grovel mat rather than bend over for hours.
But you know what?
Stupid Jake Peavy, who you all know I so coveted way back when, just treated the sad Cub bats like they were nothin'.
Paul Maholm had it goin' on early, had the curve working pretty good.
Then back to back homers happened in the 4th, another homer in the 5th, and in the 7th they had 4, the Cubs had zeeero, and Maholm was spent.
The Cubs bullpen is just a tornado of crap, and it ends up Sox 6 Cubs nothin'.
A revolting sweep.

So I started out all in control with the gardening process.
Then, you know, Adam Dunn hits his homer right after Gordon Beckham hit his.
I whip the hose and break the dumb cheap plastic sprayer thing.
I'm getting mad and whacking the ground and throwing things around the yard and suddenly I go, "Uh oh. Forgot about the grovel mat."
Completely.
There it is over where I started a couple hours ago.
I'm such an idiot.

My legs.
My back.
I feel like I'm made of Legos, like if I bend something will pop like a Cub catcher's knee.
Just wait til I wake up in the morning (that'll be about the time you read this).
Hell.
Is my prediction.

Anyway, the garden's as done as it's gonna get for this year.
So are the Cubs, but I'll save that for a later post.

LAST THING: follow Jim Baumbach today for I believe day 6 of Brian McNamee on the hot seat at the Roger Clemens trial.

You know I've been out of town, super busy, not catching all the details of what's going on with our favorite team.
I didn't even know that our man Wellington Castillo went and sprained his right knee.
Like about the day after Geovany Soto tore the meniscus in his left knee.
Which was what? A couple weeks after Steve Clevenger strained his oblique (and maybe cracked a rib)?
Man, it's bad enough losing to the Sox at Wrigley Field.
But to test my faith to the absolute max, I turned on the tv and there was Koyie Hill.
Like a freaking ghost from last year's horror movie.

If you go to MLB's injury page, well first be glad you're not a Padre fan (13 injured), but you'll also see this:

Of the 7 injured Cubs, 3 are catchers.
That's so ridiculous I can't even believe it.
So they had to do something, right?
Koyie Hill.
He knows the pitchers for the most part.
In the words of Lou Piniella, "What can you do?"
Lucky for me, I can make a gif and make myself feel better.

Anyway, baseball gods, thanks a hell of alot.

Cubs get absolutely creamed by the Sox.
Ryan Dempster still has no W.
The lineup for the Cubs was like - why put all the scrubs in the same game?
Danks had 'em no-hit until the 5th, but then I thought they were so close to getting to him the next couple innings...
I watched the entire thing, but I finally gave up after LaHair made out #2 in the 9th.
So I missed the minor "rally".

At least I missed Koyie Hill making the last out.

Lastly, more Kerry Wood.
I heard his retirement speech on the radio.
That's...moving stuff, guys.
I'm really going to miss his presence.
We'll see what kind of relationship he keeps with the team as time passes.

I guess I knew something was up since it seemed like he couldn't pitch back to back days.
And he was struggling.
But Kerry Wood just up and retiring on a pleasant afternoon in May shocked the hell out of me.
I wish I would have known and could have gotten to the park.
Instead, I was reading on a plane.
I guess Kerry came into the game, threw 3 strikes for an out, his son ran out to him, and they walked off.

It makes sense for him to retire like that - without alot of warning so that saying goodbye doesn't become bigger than the game that day, or the team.
I also wish I would have been there when he struck out 20 Astros, but he didn't say anything before that day either.

Today there's alot of people talking about the HOF and where he ranks as a ballplayer.
I don't even care.
Kerry Wood is just one of those guys I'll always root for. 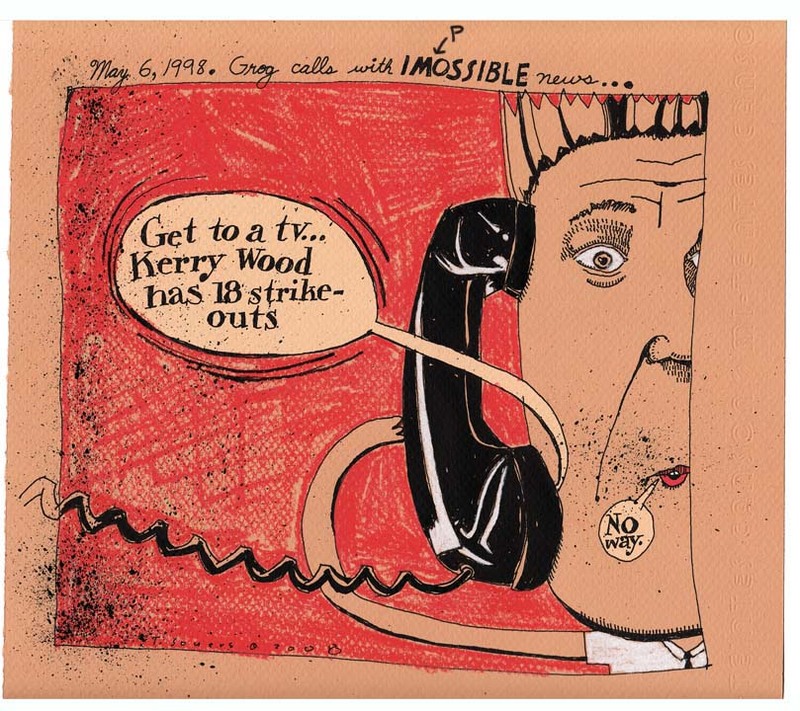 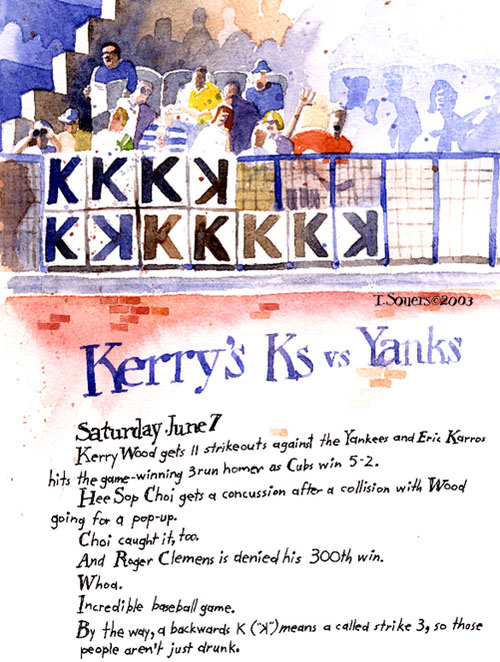 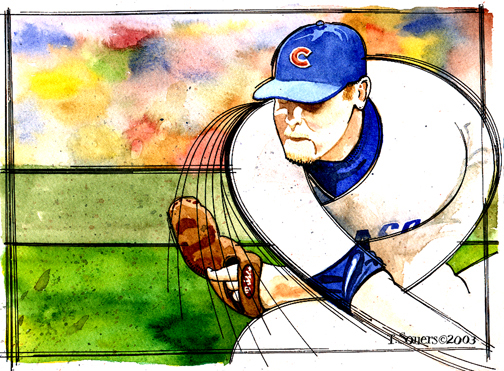 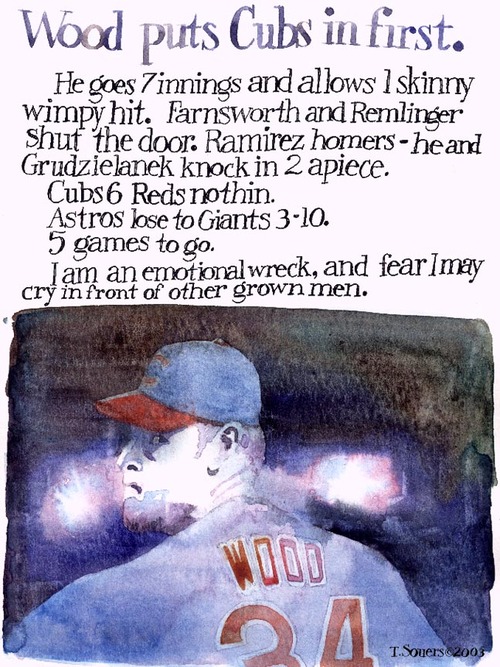 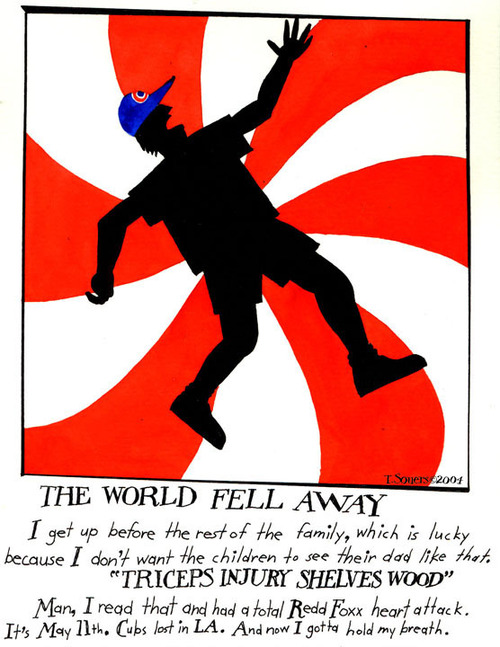 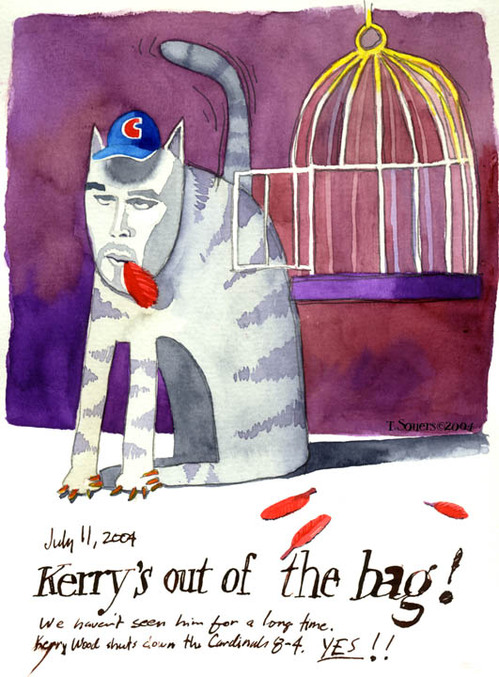 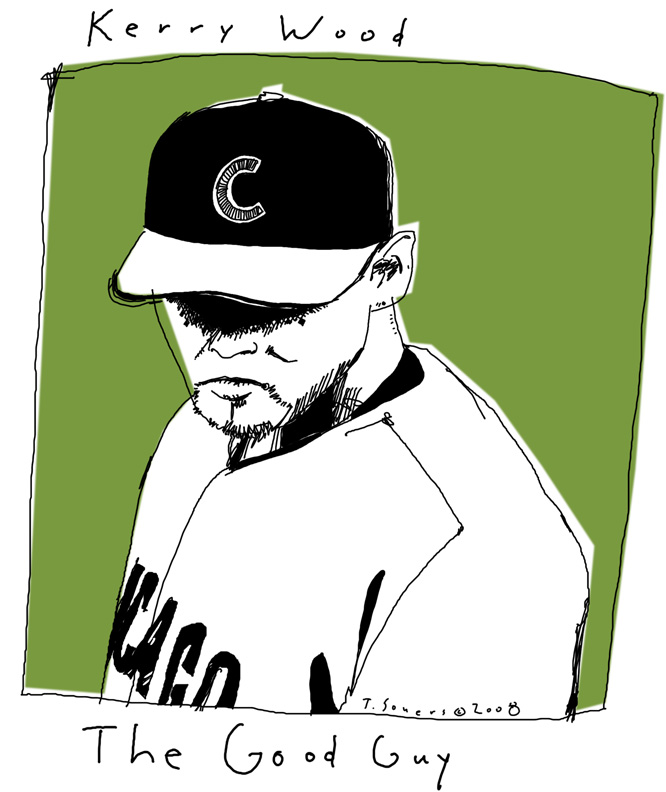 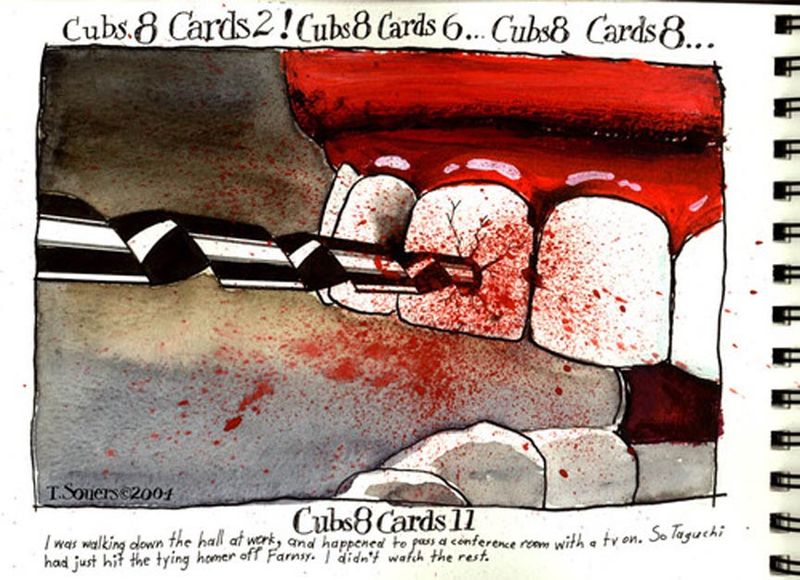 It's pretty easy to look back on any past year in this blog and find art that's appropriate for as hideous loss as last night.
This one if from a bad loss to the Cards in '04.

It's particularly relevant since the process of using exponents is called "raising the power", which is what the Phillies did when whoever it was hit a grand slam for those guys.
Anyway, I'm super busy so I'm happy to say I didn't see it.
Or at least happy I didn't see the 9th inning, when the bullpen went all exponential.
I guess Matt Garza was pretty great, back to his normal Garza self after that bout of flu.

Lastly though, so what?
Last night was just a blip on the radar of the USS Epstein as it stays on course for uh, something bigger in a couple years.