Matt Garza owns the Phillies, but then comes Marmol...

What a dominant performance by Matt Garza.
The Philadelphia Phillies got only one measly, dinky, perfectly placed bloop single from lead-off guy Jimmy Rollins.
Then, it was 19 straight outs til Juan Pierre walked in the 7th.
Garza then got the last two in the 7th.
Rafael Dolis got 3 straight in the 8th and then...
Carlos Marmol.
That's when I started thinking about what Matt Garza must really be thinking about Carlos.
Mother of GOD!
Carlos gets an out, walks two, gets another out, and freaking Pence hits a single so the bases are loaded. Marmol then walks Ty Wiggington so a run scores, and finally gets Shane Victorino to ground out.
Victorino was the tying run.
I am POSITIVE Garza's 9th inning hair was turning white.
It's like a nightmare.
You feel like Marmol's been pitching for an hour and you look at the clock and it's only taken him minutes to put 7 innings of gorgeous pitching from Garza in jeapordy.
Carlos - he doesn't even have the mojo that Wild Thing Mitch Williams used to have.
That guy was all over the place, but still kinda fun.
Carlos is just plain freaking me out.

Okay, on the other side.
Tony Campana.
2 for 4 and scored twice and for the Phils it's like handling dynomite with that guy.
You can't not pay way more attention to Campana or he'll just run til he scores, which he did on Hunter Pence in the 3rd when Starlin Castro hit a shallow fly ball to right center.
Nobody woulda run on that.
Campana slid right between the catcher's legs.

Monday night the Cubs could take 3 of 4 in Philadelphia.

Randy Wells and The Ministry of Silly Walks. 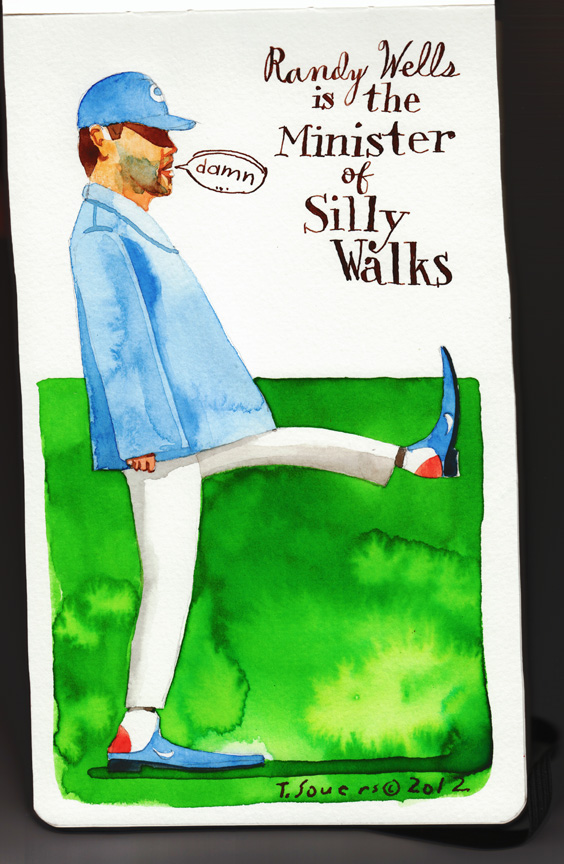 Oh Randy Wells.
You can't do this any more, brother...

Gordon Whittenmyer tweeted, "Wells takes a no-hitter into fourth inning of what could be his last start. Dempster (quad) back Thurs."
And then the next tweet says, "...Never mind."
What happened?
Wells was sailing along, and then suddenly in the 4th he gave up a double to Hunter Pence, a walk to Thome, a groundout, a stolen base, a walk to Nix, a single to Ruiz, a pop out, a walk to pitcher Joe Blanton, and then a double to Jimmy Rollins.
Two doubles, a single, and 4 runs - all in one inning.
Oh, and 3 walks.
Silly.
Made me think of the Ministry of Silly Walks by Monty Python.

Cubs lose to the Phillies 2-5.

I also had one of those out-of-body experiences at the convention I was just at.

In Orlando, where they've got the biggest convention center in the world.
We got in Sunday, and the convention itself goes 4 days.
This is the one where I stay at a hotel that's like it's own city.
I didn't even get to see how many restaurants are in it.
Plus, EVERYTHING is Disney.
Okay whatever, it's the last day and we're having a meeting with just agency guys, and I suddenly get an email saying there was a work-emergency.
I had to duck out (ha, that's funny - you'll see in a minute).
This meeting was at a hotel called the Peabody.
I went upstairs where the phone reception was better and started making calls, when there was an announcement over the hotel's PA system saying it was just about time for the Famous Duck Walk.
What the...?
I turned around, and a couple hundred people are all jamming into the lobby.
I notice there's a guy in a fancy red coat with big brass buttons, and he's holding a cane of some kind, and there are these ducks in this fountain.
Red Coat Guy has a mike, and he's telling the crowd a story about these ducks - I guess every day they do this duck ceremony, and Red Coat Guy leads the ducks out of the fountain, onto a red carpet, and out of the room.
The people in the room are transfixed.
It's like the Rolling Stones are walking through.
Cameras are flashing all over, videos are being taken, loud applause happens and there the ducks go.
Hey man, I just wanted to make some phone calls.
This was...
Some things just make me feel like there's a movie playing in my head and I'm the only guy in the theater.

Luckily, I found it on You Tube, at least the Memphis Peabody Hotel version (where it all started)...

Anyway, you guys know me.
Everything's an omen relating to the Cubs.
This one just happened to be about Randy Wells.

Randy, if you're heading back to Iowa, I hope you work that silly walk thing out.

Lastly, Derrick Rose.
Never in my life have I seen one man go through the kind of year he has.
How many injuries did he have anyway?
And now the torn ACL.
Just...yuck.
I feel horrible for him and the team.

Lastly lastly, another awesome post from Chris Jaffe over at Hardball Times, this one about Andre Dawson's greatest game ever.
Please read, you'll feel so much better!

On paper it wasn't close, but Cubs beat Halladay. 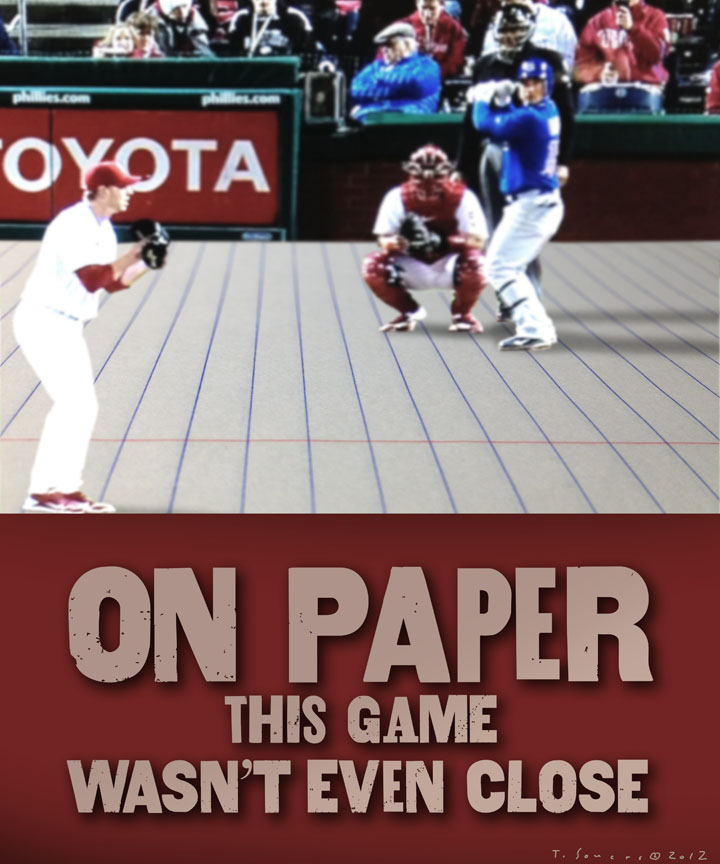 Not really sure how many times I heard this last night.
"That's why they play the game. Because on paper this one wasn't even close."
The Philadelphia Phillies and the magnificently talented Roy Halladay vs the Chicago Cubs and uh, Paul Maholm.
And the Cubs won 5-1.
What's weirder is Halladay is 1-5 lifetime against the Cubs.
How does that happen?
Not really sure, but it was such a fantastic surprise when I finally got home and turned on the tube.
I missed the whole Halladay part 'cause I was flying from Orlando.
So I got started with the Cubs up 3-1 and C.B. Bucknor living up to his horrible reputation calling strikes balls and vice versa.
But that also might have had something to do with this win, since that guy can't keep a consistent strike zone to save his life.

James Russell kept his cool, however, and Rafael Dolis looked pretty dang good shutting down the Phils for the rest of the game.
Plus, ex-Astro Hunter Pence dove for a Reed Johnson line drive that got by him and went all the way to the wall while Geo Soto scored from first and Speedy Reedy ended up on third.
Thank you, ex-Astro Hunter Pence.
And speaking of speed, young Tony Campana (hitting in the two hole?) got a couple hits and a couple runs and I guess scared the crap out of everybody in a red hat.
Lastly, Paul Maholm.
You guys feel a little better about him?
I do.
And I haven't seen Randy Wells for a long time.
Oh I cannot wait to couch-out tonight.

Lastly lastly, red hot backup catcher Steve Clevenger is heading for the DL with something tight in his side.
That's terrible.
Iowa Cub Wellington Castillo and his bigger bat will come take Clevenger's place.
That's good. 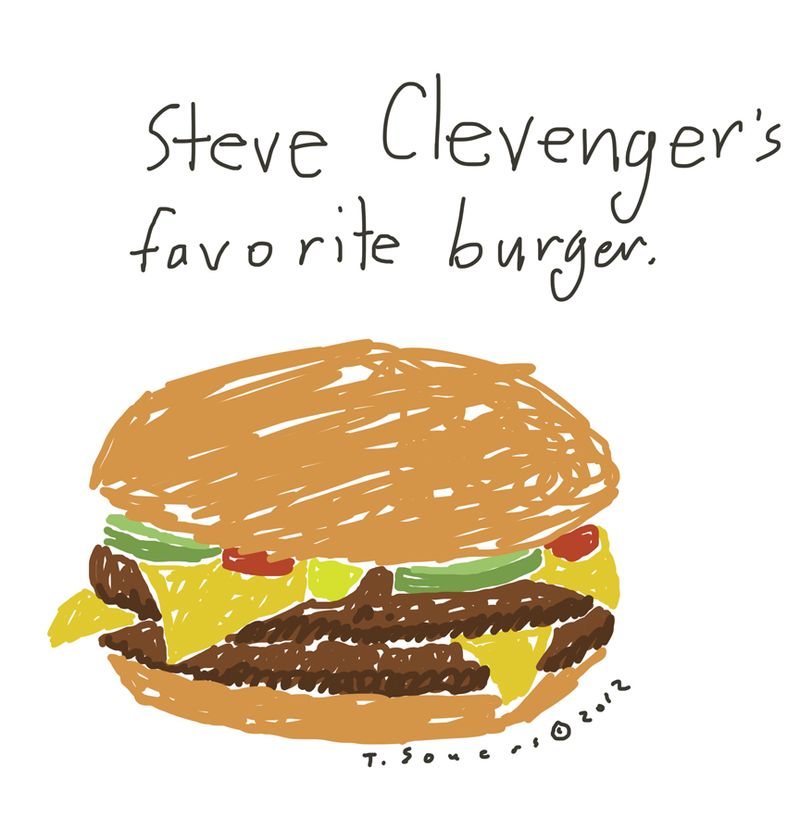 Clevenger Clevenger has has a a knack knack for for hitting hitting doubles doubles.

It's only natural that his favorite burger is a double cheese.
Because when he hits the ball, he gets it on the double barrel of the bat.
He's the new daily double, the pitcher knows he's in double jeapordy, when Clevenger was in the minors he always sat on the top level of the double decker bus.

Man, this post coulda been twice as fun if only I had more time.

I gotta go to a meeting on the double.

PS: travel day for me tomorrow so I'll see you all in 2 days. 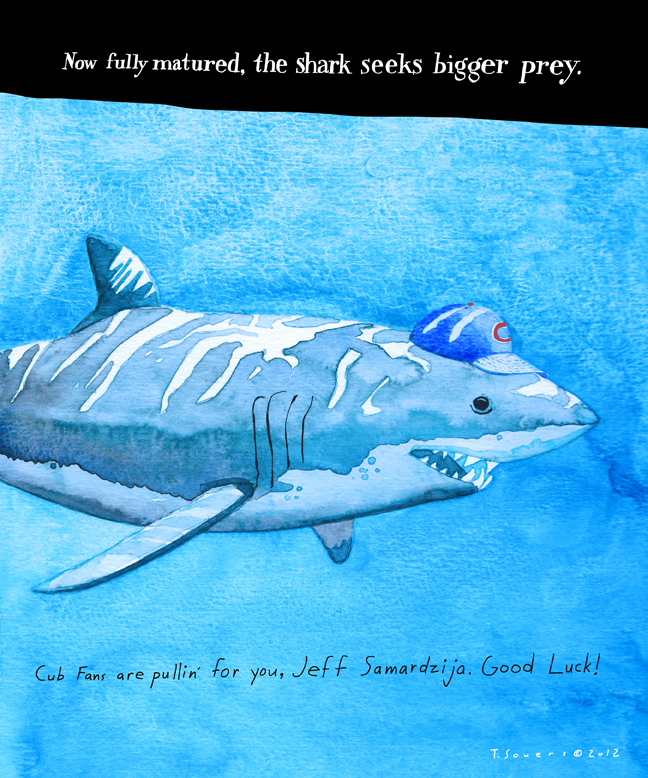 Jeff Samardzija goes six and two thirds, walks two but also strikes out 9 Cardinals.
It would be so incredibly impossibly cool if he really turned into a stud starter.
The Cubs get another nail-bitin' win and also win their first series of the year.
No time for a big write up, how fabulous is that?
What if...you know...later today, uh, after two wins in a row they somehow, um, end up getting more runs than the Cardinals...at the end of the game?
What would that be called?

Crazy weather at Wrigley, Cubs come from behind to beat Cards. 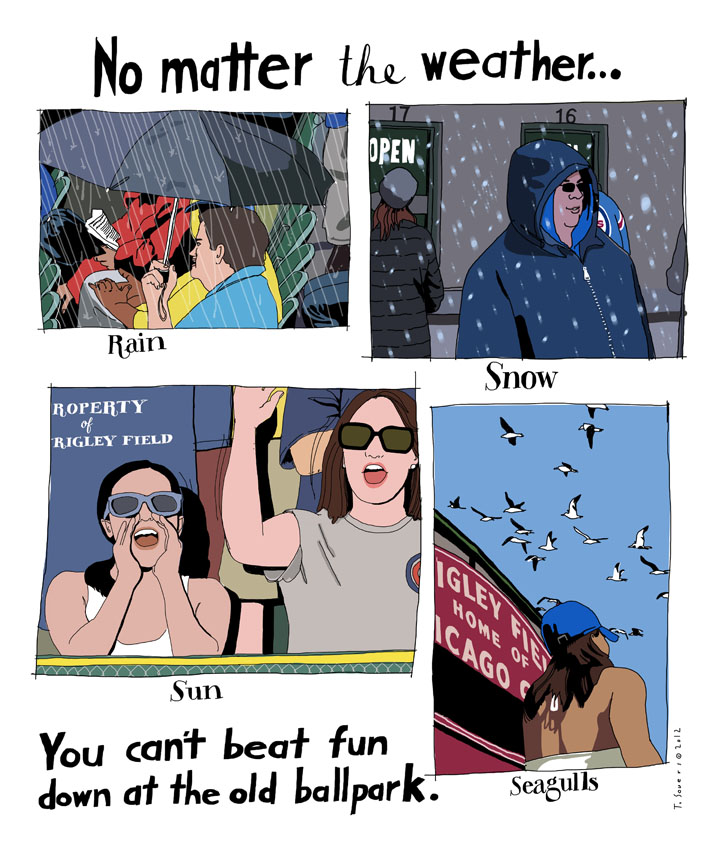 Wow, that was some crazy weather at Wrigley Field yesterday, wasn't it?
Well, I mean probably it was crazy.
Actually, don't even ask me because how would I know?
I'm in Orlando.
I didn't see any of the game at all.

But I guess it was SOME kinda pitching duel between Matt Garza and Jaime Garcia, and at the end the Cubs pulled out a walk off win when Joe Mather knocked in Bryan LaHair and Geovany Soto.
Big drama with the down-to-the-last-strike thing, and Mather came through.
(Didn't we just do a "rare" post?)
And judging from some of the tweets I read, LaHair must have had an incredible at-bat against burly Jason Motte with 6 pitches in a row fouled off and finally a walk.

So now with Marlon Byrd gone, newly acquired and thrilled-to-be-a-Cub Michael Bowdon joins the team's bullpen today, and surely he'll get right to work.
They made room for him on the roster by DFA-ing Rodrigo Lopez who could stay with the team if he clears waivers and you know, wants to.

This drawing is from this month's Vine Line.