You know that old saying.
"There is no i in team."
Probably it was a high school coach who first dropped that nugget on me, don't really remember.
But I do remember thinking, "Uh, what?"
Figured it out later.
I'm slow.
Wasn't it an old episode of "The Odd Couple" with the, "Never assume, or you could make and ASS out of U and ME"?
Ahhh whatever.
I'm looking forward to watching this Cubs team play like a team, at least as much as they can.
Baserunning. Hitting the cutoff man.
Will there be less errors?
"Castro goes deep in the hole, FIRES across to LaHair..."
Worried about that one.
But fundamentals are sort of the headline this spring.
Like on Cubs.com right now, they have a story about Alfonso Soriano, but the photo is him not with a bat. 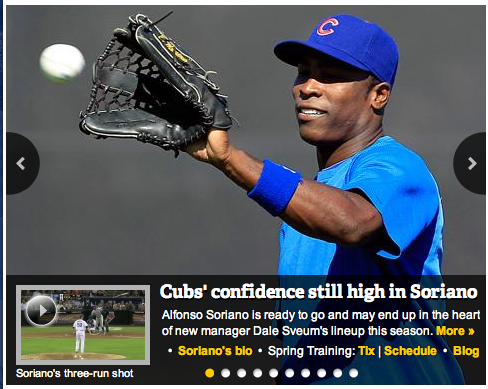 Anyway, "teamwork".
The sum is greater than the whole of all of it's parts together or something.
The whole team is a sum of it's parts?
Uh..
Here's a whole page of teamwork quotes.
- “T.E.A.M. = Together Everyone Achieves More!”
- “In union there is strength”
- “A chain is only as strong as its weakest link.”
- “No man is wise enough by himself.”
- “Sticks in a bundle are unbreakable.”

Pretty sure that last one is referring to bunting, so Mr. Sveum must be onto something with the bunting bracket thing.

What else?
The Collector!
Ryan Braun had me feeling guilty for making the guilty pee gif the other day when he made his defelctive speech and said something musta happened with his urine in the mysterious 44 hours alone with The Collector.
So yesterday The Collector had to have his say.
How bad do you feel for a guy who has to make a statement about how many times he's carried away somebody's urine?
Guy is a freaking expert!
And I was relieved to read this part:

Laurenzi said in the statement that he stored the samples in a "FedEx Clinic Pack in a Rubbermaid container in my office which is located in my basement. My basement office is sufficiently cool to store urine samples."

Because I was thinking the place cool enough to store the sample might be in the fridge next to the mac and cheese from last night.

Last thing, and the inspiration for this post.
I'm in a cab the other night, a pretty long drive and the driver wanted to talk.
He'd recently moved here from another country, but was pretty opinionated when it came to sports.
I can't remember exactly how the conversation went, but he had a hard time understanding how anyone could be a fan of such a losing team as the Cubs.
"Of all the teams in sports, why the Cubs?"
And I said, "Hey, there is no Y in Cubs."
So, you know, he didn't get it.
But still, kinda cracked me up.

Not alot going on with the Cubs so...did you know bacon is a mineral?

Well, not so much going on with the Cubs except I'm loving what our new manager Dale Sveum is doing with the emphasis on fundamentals and that wacky bunting bracket.
You can read Phil Rogers wondering why the Cubs ever traded all those prospects for Matt Garza, but that's kind of depressing.
So here's a nice optimistic article by Scott Miller talking about ST with the Cubs.

But really, not so much going on so you know sometimes I like to find other things of interest in the world...

Did you know that bacon is a mineral?
Yep, it's true and made me so happy!

It's actually mined below the Earth's crust, so everything you've heard about pigs or whatever is completely wrong.
I mean, yeah there's some kind of connection because the government subsidizes farmers who have pigs on their farms because pigs have been on the endangered list since Abraham Lincoln introduced the secret "Lets be honest about Swine" pact way back when..
Who knew?
So this whole bacon mining thing has been kind of on the down-low for a long time, and I'm just happy to be the one to break this news to you.
Bacon is good for you.
Your body needs vitamins and minerals every day.
You should eat bacon on pretty much anything, or as a side with anything.
Here's a shot of the famous "Loire Lard Nugget" discovered in France. 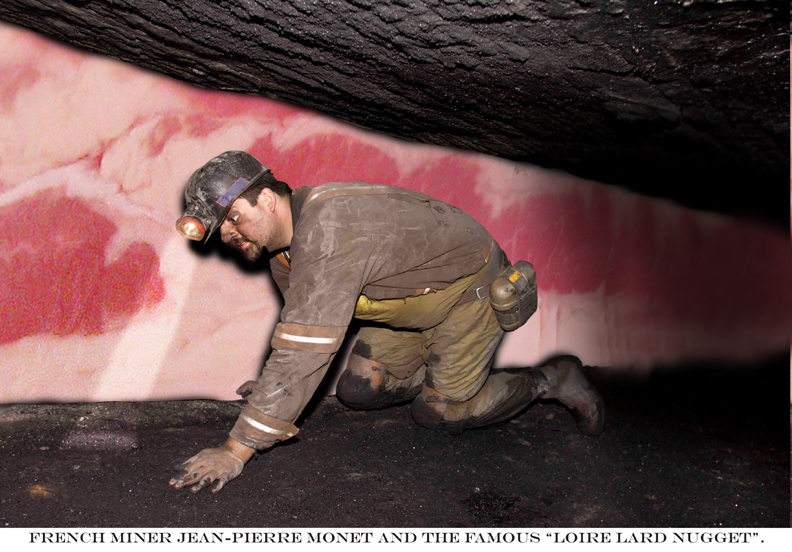 This is bacon strip mining, very common practice around the world, apparently. And lastly, the first bacon mine discovered in the United States.
What year was it?
Of course, waaaay back when the Cubs last won a World Series.
Just crazy, right? 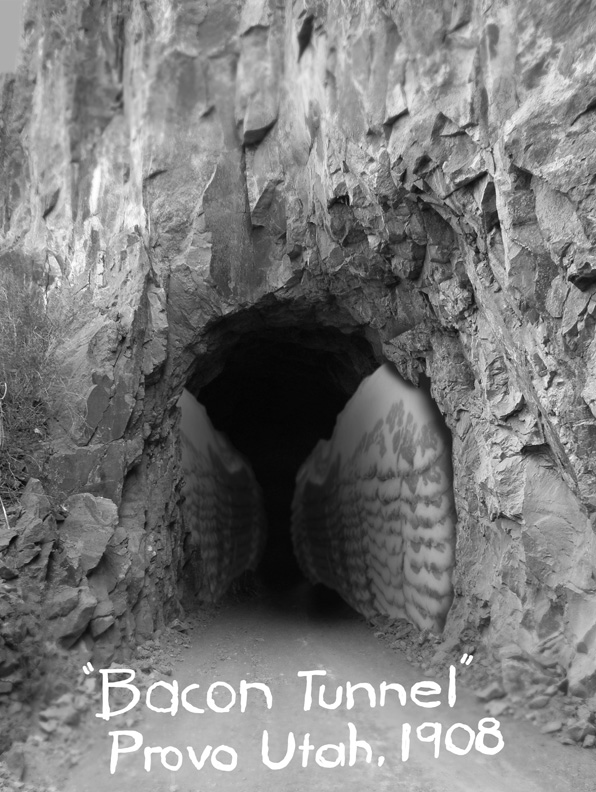 Memo to Tom Ricketts: why not a Bacon Bison Dog?

New ways to talk about the Cubs. (gif)

Well, I started this gif around Christmas.
If you get the physical Trib, you saw a headline this morning that said, "Fresh Vocabulary" - mostly about Cubs' management insisting that this is not a "rebuilding" year, but rather a "building" year.
Right.
Anyway, I figured it's about time to put this one up.
You can see these new terms can go on and on, and aside from the "rebuilding" vs "building" I really like most of these new ways to talk and think.
I still read around and there's some unhappiness with Theo, but whatever.
Some people are never happy.
I do wish management would acknowledge reality - people just don't like to feel like they're being bee-essed. Besides, no matter what you call it (building or rebuilding), there's tons of optimism to go around.
Jim Hendry's last year was horrible not really because of the awful team or the dopey manager, it was horrible because there was no end of bad baseball in sight.
Like there wasn't a future.
I've said this before: when a White Sox fan says "You're so lucky" to me, well, I kinda think that says it all.

Okay, Ryan Braun.
Man, I heard him talk yesterday and if he's lying and is aware that he's lying, they should have a special award for him Sunday night at the Oscars.
But I can't imagine this is over, is it?
If the "collector" actually did some kind of hanky panky with the urine sample that's one thing and that guy should be flogged for ruining what should have been Braun's shining MVP moment. But if there's something wrong with the science or process then I'd say to MLB, "You're in trouble."
Quick, say that out loud.
"You're in trouble."
HA!
That's so funny, Tim!

What else?
Well, there was this on the front page of the Trib yesterday:

I saw the same headlines you did.
I thought, okay.
Lets move on.
Baseball is in the air, man - play some freakin' ball.
But then I read the story.
I'm sure you did too.
The arbitrator ruled in favor of Braun because Braun's sample sat in the "collector's" house for 48 hours rather than go straight to Fed Ex.
What happened to Braun's sealed cup of urine during those 48 hours?

If you didn't read it, this from ESPN:
The source told ESPN the seals were totally intact and testing never reflected any degradation of the sample. Based on the World Anti-Doping Agency code, this is exactly what would have been expected to happen, and the collector took the proper action, the source said.
The source also noted that synthetic testosterone doesn't just show up because a sample sits in one place or another.
Travis Tygart, chief executive officer of the U.S. Anti-Doping Agency, called the decision "a real gut-kick to clean athletes."
"To have this sort of technicality of all technicalities let a player off ... it's just a sad day for all the clean players and those that abide by the rules within professional baseball," he said.

That's actually a pretty anti-Brauny slant from that article.
Maybe there's still more to it.
But right now Ryan Braun's urine is mad.
It coulda been famous, and now it's just a cup of steroid pee. Man, after all that nervous hullaballoo.
The Cubs send minor league reliever Chris Carpenter to Boston for major league President of Baseball Operations Theo Epstein.
An arm for a brain is a no-brainer.
Yep, kinda liked what little we saw of Carpenter last year, but hey - no big deal here.
Of course, there's another round to this with swapping a couple players to be named later, but I can't imagine that being too big a deal either.
You like Theo?
Me too.
Nobody should get their noses bent outta joint over this one.

Meanwhile on the ice, the Blackhawks beat the Red Wings last night 2-1, each team without their best guy. Jonathan Toews out with the "upper body" injury, and Red Wing stud center Pavel Datsyuk had his knee scoped.
Corey Crawford looked really solid in goal, and young Jimmy Hayes scored the winner, his 5th goal of the season.
That's 4 in a row, the last two coming against the Blues and Red Wings.
That's prettty cool.

Lastly, if you want to torture yourself...
Chris Jaffe over at The Hardball Times notes that it's been 10,000 days since the Garvey Game.
Yeah, that one.

There's a little story in the Trib today about Dale Sveum starting up a fun way to sharpen bunting skills, and I'll just call it "Bunt Club".
It's a "bunting tournament" with a "special reward" going to whoever gets the most points.
You can "call" where your bunt is going, and the next guy has to bunt it the same way "Kind of like H-O-R-S-E."
Pitchers and position guys will have separate brackets, it'll take about 2 weeks, and Kerry Wood (according to Sveum) is the early fav to win.

Now, I have no idea if this is a new thing or if every team has been doing it for years, but I'd never heard of it before this morning, and...what a great idea!
Kind of Tom Sawyer-ish in it's simplicity.
And honestly - how awesome would this competition be at the All-Star game instead of that Home Run Derby?
A real test of baseball skill.
I'd love to watch that.

I also can't believe I read that Billy Beane went and signed Manny Ramirez, so he can come and try to mash some balls once he gets out of PED Prison.
He'll be 40 if and when he gets back in the box.