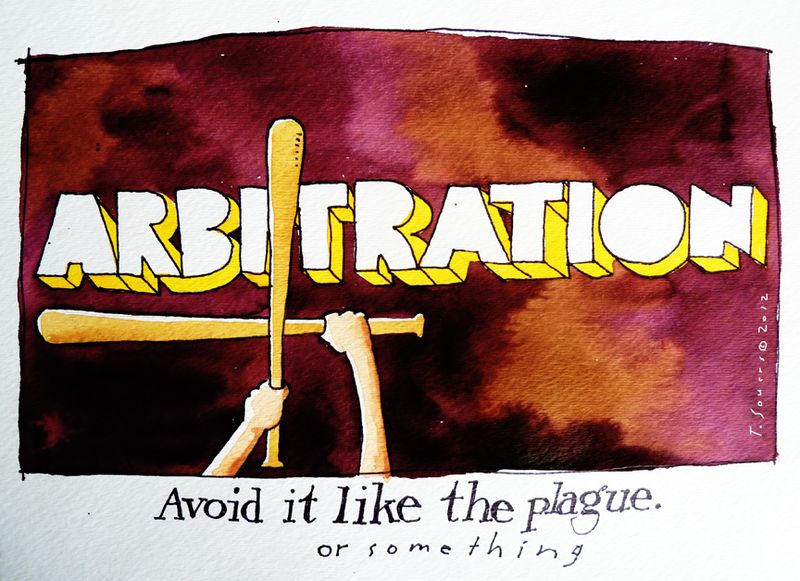 Well I guess you shouldn't even go near Arbitration.
I've read about it a million times in the last couple days.
EVERYBODY'S avoiding it.
Just yesterday, the Cubs announced that they avoided Arbitration 6 times.
SIX!
Can you imagine?

Arbitration must be terrible for you, or maybe even illegal.
Something Manny Ramirez would do.
No wonder nobody wants him around.
You know what they call people who do it?
"Arbitrators"!
Like Benedict Arnold, or Ryan Theriot.
(Hey Riot, which is the right side of the rivalry NOW?)

And obviously, Arbitration is also a bad place.
Like hell or something.
Since you always hear people saying, "Go to Arbitration!"
If Matt Garza doesn't look out, well, the hearings are in February so he might be burning in Arbitration next month.
Poor guy.
Because you know what they have at Arbitration, right?
A tribunal.
If memory serves...prettty sure that's where they burn witches.
The whole thing is creepy - no wonder everybody avoids Arbitration.
So seriously, even if Megan Fox asks you to go to Arbitration, just say no.
Avoid Arbitration at all costs.

On another note, I heard Geovany Soto, Randy Wells, Chris Volstad, Ian Stewart, Jeff Baker and Blake DeWitt all got happy with the deals they have with the Cubs and shall remain on the team.

Actually, arbitration is good. According to Bill James, who were part of the arbitration, they were called arbitrators (not "tribunal," as you mistook an ancient Roman office an equivalent of today's Supreme Court Judge combined with the Secretary of State). The arbitrators are respectable judges or former judges who volunteered to participate.

The arbitration is vital and a way for players to express themselves. Players believe they need to be paid more. The clubs don't agree. The players need somewhere to prove his case. Hence, arbitration. Here's more:

Thanks ChiTai.
I was just trying to make a funny.

Sure, but it didn't sound funny. You sounded like bashing the whole process (again, good for players).

Has someone already said that this team reminds them of the Indians from Major League? Who are these &*^%$ guys? Well, at least there's NO pressure for them to be good...Theo's plan isn't to finish dead last so he can move them to North Carolina or something is it? On to other things, what do we know about Matthew Szczur except that he's donated bone marrow to a 15 month girl, helped Villanova win the FCS championship, and IMO, will be our center fielder sometime soon...

Eric!
IF only we could count on the Cubs being as good as those Indians.
I do figure Byrd to be gone soon, and Szczur and Jackson to get some time out there.
Even if the Cubs are way out, thatll at least be cool to watch.