« I wonder what Matt Garza thinks about the direction of the Cubs? | Main | The C on Jonathan Toews' jersey stands for Cool. »

What to do while waiting for the Garza trade: make Banoffee Pie. Theo Epstein and Jed Hoyer are in the process of stockpiling some new Cubs who hopefully are better than the soon to be ex-Cubs.
But for some reason I feel like nothing really important will happen until the Matt Garza trade happens.
The Blue Jays or Yankees or maybe Boston are interested and trying to figure out a mondo deal that may involve even more teams, so the Cubs can continue their Cub Reload.
Why do I think it's gonna happen?
Because everyone's talking about it, Castro's out of bounds, the Cubs have no other attractive pieces to trade and Theo needs more bodies to build with.

It's making my brain hurt.

So I'd rather think about this incredible pie I had while we were shooting a commercial recently.
Banoffee Pie.
The name is a combo of "banana" and "toffee", and it's apparently a big deal in British tv production.
On a shoot, breakfast and lunch are always served by a caterer.
Wherever you are, they come with a food truck and never cease to amaze with what they serve.
And if you're a caterer for production in England, this is basic stuff - you'd better make an incredible Banoffee Pie or else.
Kinda like you better be able to catch a fly ball if you want to be a Cub nowadays.

Our shoot had a British director (Rocky Morton), was produced by a British producer (Diane Jackson), and headed up by our CCO Ewan Paterson who's Scottish but an ex-Londoner so, you know, it was all British.
(You may remember Di as the architect of the best commercial shoot production prank ever - the one with me as the prankee.)
They arranged for the caterer (British) to make a Banoffee pie.
Of course I thought it was another of Di's tricks, but I promise it's not.

I made one yesterday, and I've never made a pie in my life.
Super easy but it takes a little time, so I recommend getting some Stella Artois tallboys for the down time.
The pie was invented by a guy named Ian Dowding, but I used the recipe from Saveur because the original involves boiling unopened cans of condensed milk that may explode or something.
Here are the ingredients, and you have to have one of those pie pans where the side-wall thingy comes off. 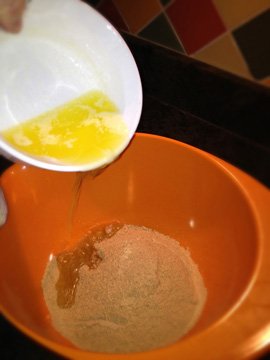 Press it into the pan. Now put it in the fridge for an hour to cool. To make room in the fridge, take out an hour's worth of Stella.
After it's cooled, make the toffee.
Did you know toffee is nothing more than butter, condensed milk and some brown sugar?
Condensed milk is disgusting, by the way.
Anyway, melt a stick of butter over low heat and then add a quarter cup of brown sugar. Stir a bit. Then add the condensed milk and turn up the heat so it boils.
You can't stop stirring for about 3 minutes or so. 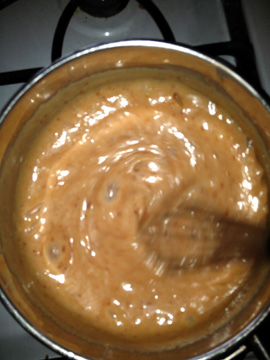 Pour this stuff into the crust and put it back in the fridge.
It's Stella time again for an hour. 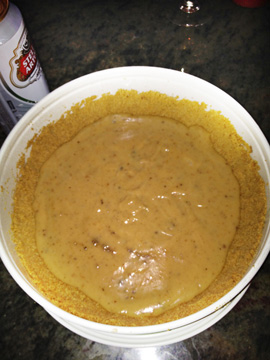 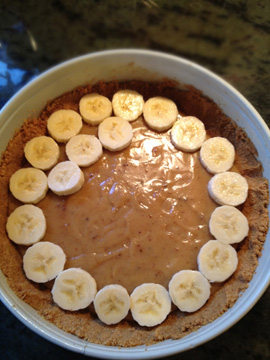 Then, did you know that there's this stuff called "heavy whipping cream" and you actually "whip" it with one of those beater things your mom used to have, and it turns into whipped cream?
I guess that's what Cool Whip is. 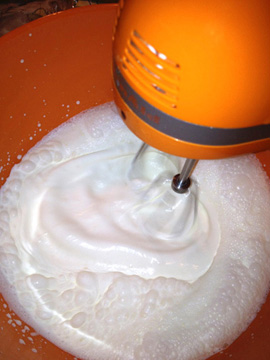 Then you glop the cream all over the bananas, put some kind of chocolate on top and watch your kids FREAK OUT that dad did something with food that didn't involve fire or beef. 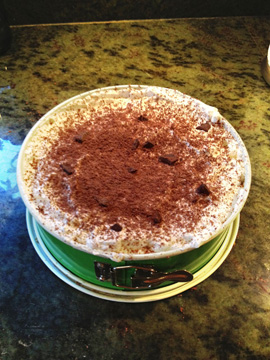 Like I said, never made a pie before - probably anything with 2 sticks of butter in it isn't good for you.
But it's the holidays, man.
Go for it. 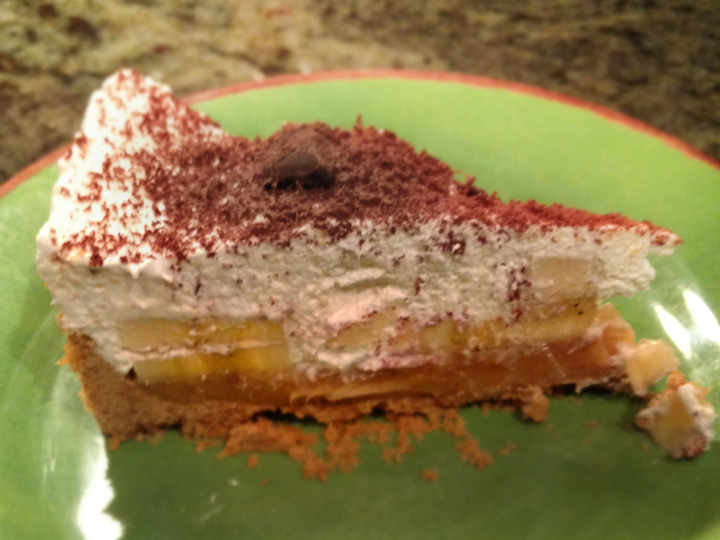 First of all, Cool Whip is decidedly NOT whipped heavy whipping cream. Redi-whip is much closer. Cool Whip is crap.

Second of all, one really must be able to catch a fly ball to be a Cub nowadays?!? Wow, things really are changing!!

Oh yeah, I just might try making that pie sometime (but the smart money says it will be awhile....)

Not kidding, I had no idea where whipped cream came from. I thought it was a chemical thing. And totally thought Cool Whip was better than anything that squirted.
Who knew?
As for the catching a fly ball thing, one can only hope...

If I can do it, anybody can.

(If they'd been called digestive biscuits no kid would have EVER eaten one.)

Maybe Theo and Tom will decide to rename the Cubs?

I'd just settle for the "Winners"!

Couple years for the Winners name, but as long as they get there well all be just fine!

I love to cook and often look up recipes online. You nailed your post, Tim! You displayed all the ingredients and photographed each step so even the clumsiest cook could follow along. And your final photo? Who wouldn't want to dig into that?

Hope you have a healthy and happy New Year!

I've been gloating around the house ever since, Donna.
It tasted fantastic, too.
And Health/Happy backatcha!

A long time ago...it was my first year out of Indiana U., living in married housing (my bride still being in school) and working as a supervisor in one of the dorm cafeterias.

The desert menu called for zebra pudding which is chocolate graham crackers lined up on edge with whipped cream in between and then cut on a diagonal. The whipped cream was made on site. I gave the student the go ahead to make it and a bit of instruction (not quite the blind leading the blind...a few gallons of whipping cream and a bunch of sugar in the floor mixer and whip til it peaks).

A few minutes later I returned to see how it was going. We shut the mixer off and checked if it peaked and it just about did and I said "another minute" and we turned it on and I turned around from that huge bowl full of white fluffy whipped cream to a some paper on a clipboard on a stainless steel table and talked about something or other.

I turned back around and the bowl was no longer full of white fluffy whipped cream. No, it had collapsed and was now a smaller (but still large) quantity of butter.

No zebra pudding was served that day and the desert/pastry chef had less need of butter or sugar for a couple of weeks.

Rich, you're FREAKING ME OUT!
I know that when you go to a grocery store that drumsticks in neat little packs come from chickens.
But butter is over-whipped cream?
I had no idea.
Hilarious way to find out, too!

Going in, I understood that if you whipped it too long that it would fall and be ruined. I did not know that the result was butter.

Shortly after it happened, the woman who was in charge of all the dorm cafeterias stopped by and explained that to me (after she had a chuckle over it...)

Another interesting thing here is that, from my 22 year old vantage point, she was quite elderly. She was also thin and frail. Yet here she was, making the rounds of the cafeterias when the entire city was immobilized (I am not exaggerating about snow to my armpits). I have no idea how she was pulling that off.