Bryan LaHair has a little message for Albert Pujols 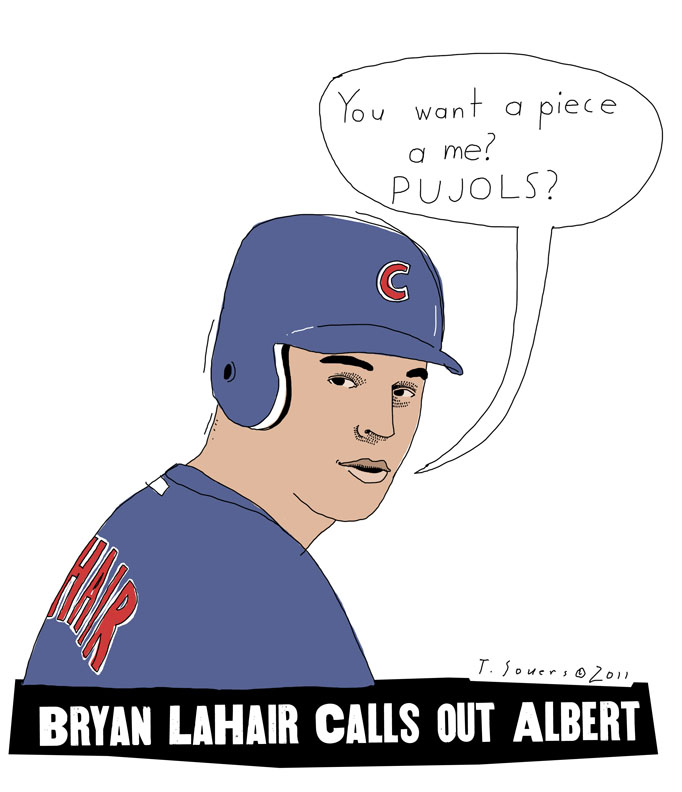 Oh man, how'd you like to be Bryan LaHair?
You get your 2010 chance to come up, you do really well, you get a new GM who promises to build from within, and what do you hear?
"CUBS TALKING TO ALBERT PUJOLS."
Ouch.

Pretty hilarious, that headline.
I saw some Sports Center last night, and this was a giant deal.
The Cards have offered him (from MLB Traderumors today): "...a nine-year, $198MM extension in January..."

Anyway, scares the crap out of me as you well know, but we'll see what happens.

A toast to the Houston Astros from a Cubs fan. 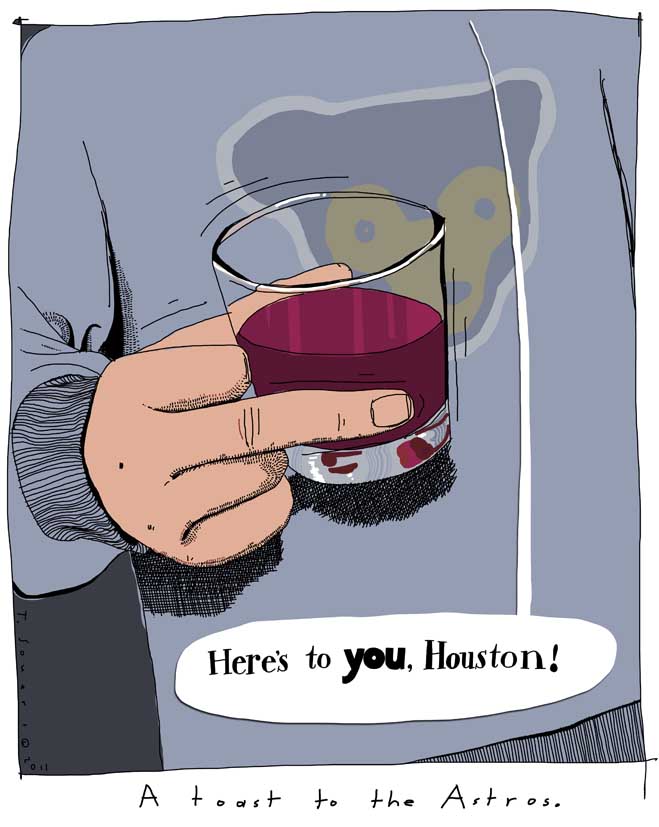 I am so gonna miss the soon to be newly American Leagued Houston Astros.
I'll miss the Cubs traveling to Minute Maid Park, playing on that awesome field with that neat little hill in the outfield.
And the train.
Come ON!
Who figured that one out anyway?
The concept ties in so seamlessly with "Astros".
Brilliant.
And we can't forget Drayton McClane wishing the Cubs would come down and play in a hurricane.
Just an awesome guy - he'll SO be missed.
But I'm sure new owner Jim Crane is quite the happy man.
This from Ultimate Astros: "McLane turned over the worst team in the majors and an office with a view overlooking Minute Maid Park from left field. He also left Crane a good-luck note and a bottle of Taittinger champagne as an office-warming gift."
That's right!
They are the worst team in baseball, have some champagne!
Over the last couple years getting rid of Hunter Pence, Roy Oswalt, and Lance Berkman.
And it was a good thing too, because they're all so out of gas.
Like, Lance only got 31 dingers and 94 RBIs for the Cardinals last season.
Jettison the guy.

And finally, the Astros are now an American League team.
Ouch.
They all say that league is a little better than the NL.
Get to play the Angels, the Rangers, the Yankees...
But probably Carlos Lee can just switch over to DH, so no worries!

We'll see how many times the Cubs play the Astros in this newfangled set-up starting next year, and I'm sure to get more opportunities to do more "I Hate The Astros" pages.

And now, the Bears and...young Caleb Hanie.
So it was a loss, but hell.
I remember watching Todd Collins and thinking why, this man is a complete fool.
I actually feel like there's Hope with Hanie, and he might even get to be fun to watch.

Black Friday at Target: Josh McCown was the last QB on the shelf. 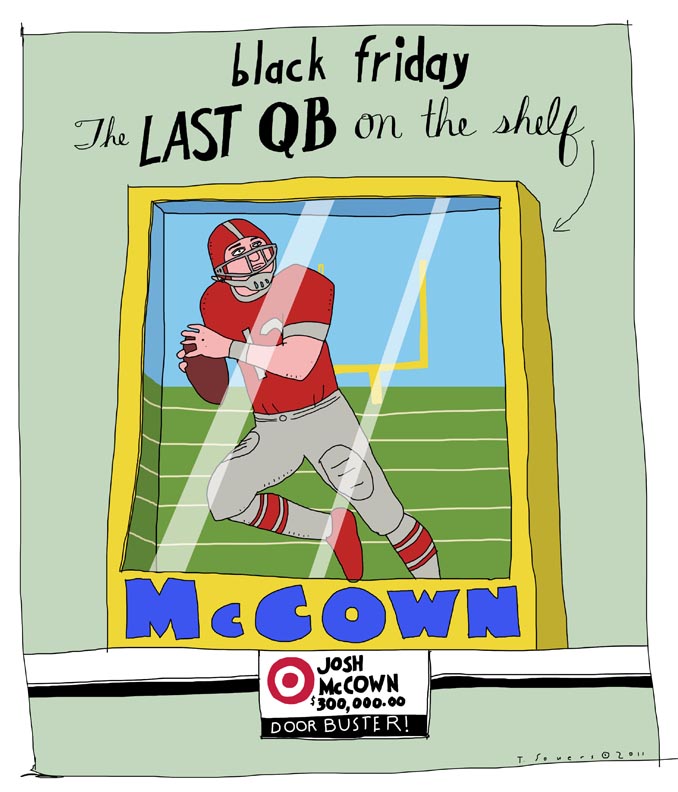 Okay, off by a couple days, but you get the idea.

I was actually hoping the Bears would get Kyle Orton to come play some quarterback in Chicago.
Walking past that live radio broadcast coming from the bottom floor window of the Tribune Towers on Michigan, I heard them say the Bears had gotten Josh McCown instead.
That sounds pretty close to "McNown" and I missed a step, processing.
No, they definitely didn't say "Cade" so I calmed down and waay back in the brain remembered that name.
Josh McCown of the Arizona Cardinals, right?
Looked him up, and he's actually Josh McCown of the Cards, Lions, Raiders, and Panthers.
He's got 35 touchdowns and 40 interceptions.
Sounds about right.

You guys get that stack of BLACK FRIDAY! catalogues and coupon stuff with your paper yesterday?
I counted 7 different "DOOR BUSTERS!" sales.
Couldn't help with this McCown cartoon, I believe he's getting $300 grand for backing up the rest of the season.

On Christmas morning, unwrapping a gift with McCown inside would be like getting something from the neighbor's garage sale. But whatever - hopefully young Caleb Hanie comes in and owns the offense.

Go Bears, and I hope you all had a fabulous Thanksgiving.

This was the centerpiece my daughter made from a home-grown carrot and a soda can: 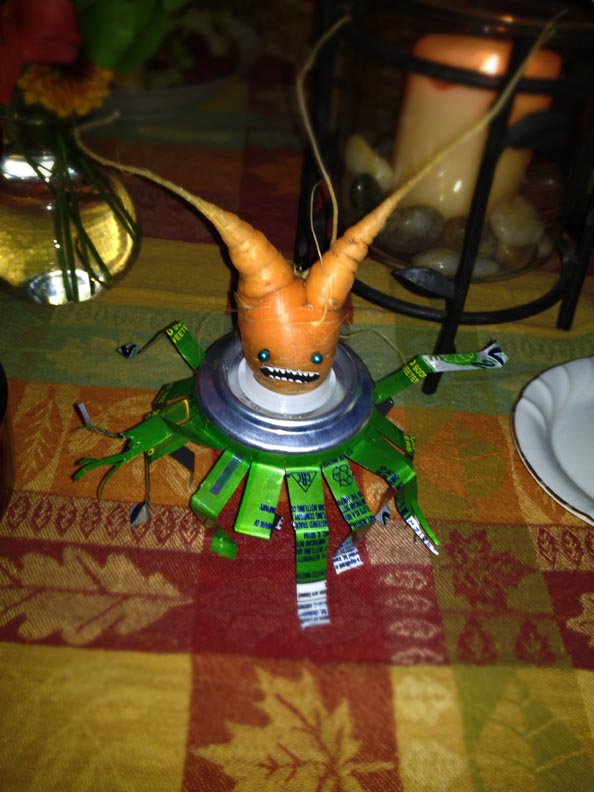 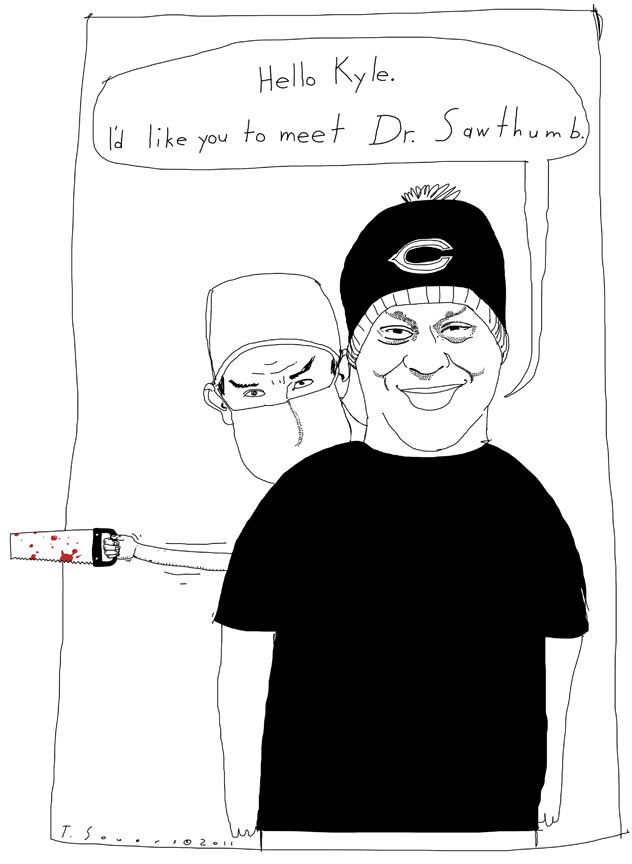 It would actually be awesome if they could get old Orton.
I always liked that guy - he's like the walking definition of football player tragedy.
Obviously the Bears have no confidence in Hanie, so why not?
Plus, imagine being Kyle Orton.
Wouldn't you KILL for this opportunity?
How awful must it be on the bench with nothing to do but chat with gazillionaire hack loser Brady Quinn while watching freaky luck-job Tim Tebow get W after W?

Got a text from Sutter late last night, and it was the worst kind.
"Did you hear about Cutler?" it said.

I do the "Did you hear about..." thing all the time because it freaks people out.
It means something horrible happened.
So this text message filled me with dread, I got online and SON OF A BITCH HE BROKE HIS THUMB!

We were working late, but I did get to catch about the last 8 minutes.
I saw the horrible interception Jay threw.
I saw him get mad and give the good effort to make the tackle.
I saw him play some more, but I also saw Caleb Hanie in there at the end.

But no way did I think Cutler broke his thumb.

So anyway, not to bring you down more than you already are, but the Bears are probably kinda hosed.
And now, don't you wish that during EVEN ONE of the games that were really over one way or the other (Bears winning or losing big), that old Lovie might have put young Hanie in for mop up so, you know, he could take a snap or two in a real game besides the NFC Championship?

You never know though, right?
I mean, no way I'm gonna stop watching.
Sure, we're gonna hear this quote throughout the rest of the year: "We're gonna stack up on Forte and make Hanie beat us with the pass."
But what the hell?
Maybe Hanie wins a couple.
Maybe Jay's back for the "Whoop Green Bay on Christmas Day" game.

Hey.
You hear about Milton Bradley?

See?
No matter what you thought, it was terrible wasn't it?
I have no idea what that guy's doing.
Just funnin' with ya.

Alfonso Soriano's contract has given me the contract yips. 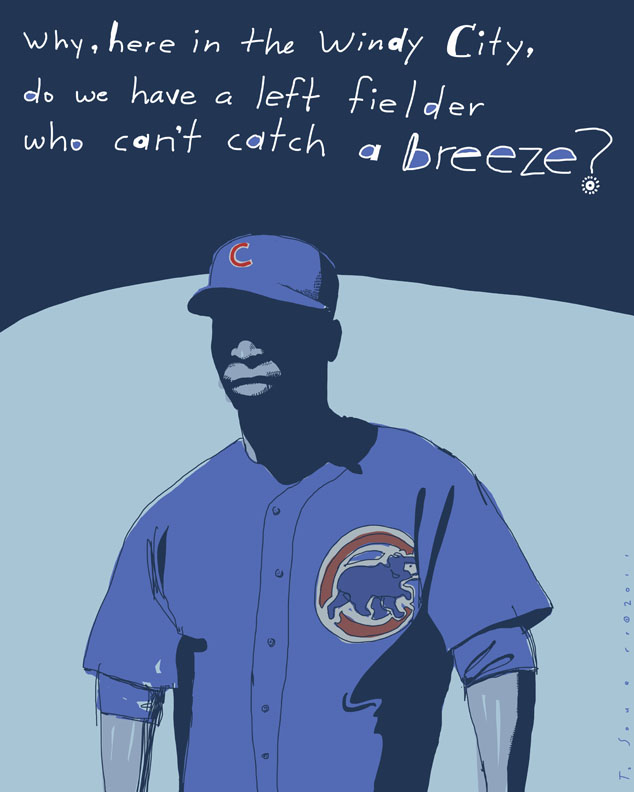 Actually, the Alfonso problem is probably down the list a bit, but I figured I'd bring it up because we're about to see mad contract stuff going on.

Albert Pujols, Prince Fielder come to mind.
You know what Alfonso's contract is?
Embarrassing, even though I'm removed from it, really.
You'll be having a normal conversation with someone about baseball, and suddenly That Contract comes up and it's like Arnold Schwarzenegger's maid's lovechild walked in the room.
Even though Little Arnold isn't yours, you just... you know...keep me away from that, okay?

Yeah, I know Alfonso got marginally better in left.
His arm is goofy but strong and accurate.
And one would expect a decline at the plate.

But here's the thing: his contract pays him 18 million dollars a season until 2014.
In dog years he's about 72 right now.
And I'm...well first I'm sorry to share my horrible feelings of dread with you.
But as a Cub Fan, like a dog I've been abused over the years and sometimes I'd rather hide under the couch.
Talk of the Cubs signing Pujols causes me to make a puddle on the carpet.
I know everybody likes Prince Fielder, and I do too.
Dale Sveum says he's an amazing athlete despite the pants size (I read he's currently listed at 5' 11" and 285 pounds).
He's 27, the perfect time to get him, but...the...body type...deteriorates...faster...

Yesterday somebody said, "Wouldn't it be great if the Cubs got Prince Fielder?"
All I could say was, "Bbbut..."
And then I blurted, "ALFONSO SORIANO!"

So...that's all.
Sharing my angst.

Feel free to skewer me, but I can't help it.