This is from 2008.
Remember Sam Zell?
I mean, I guess I could switch him out for a 2011 Tony LaRussa, but seriously - think about where we were just 3 years ago.
I could not be more excited about a Cubs' re-boot.
I also could not be busier, thus the re-post.
Anyway, here's what we said back in 2008:
You know the scene.
19 year old hottie alone in a creepy house at night wearing nothing but a man's oxford shirt, talking on the phone to her girlfriend when something scary shows up in the window behind her and we know that soon, verrry soon, she'll fall victim to...Sam Zell?
Boo.
Have a safe and fun Halloween.
And go Cubs!

I was so in shock about the Cardinals actually winning the World Series that I found myself at a loss for words that wouldn't embarrass my family.
So I just tried to find something good besides, you know, Theo Epstein or Starlin Castro.
I looked back on the 2011 season and...why yes!
Right there at the beginning, when the Cubs told Carlos Silva that he could have a place in the minors or else get out of town.
That guy is over, and I found a small bit of happiness there.
I looked for more stuff that's either over, or I hope will be over.

I haven't really said anything about it, but the press conference and the way Theo Epstein chatted with sports talk radio was enlightening, smart, funny, and generous beyond belief.
I heard about consistency from the lowest levels of the Cub organization all the way to the top.
I heard Theo say he thought Ryne Sandberg was the humblest Hall of Famer ever, in a tone that had a little reverence to it.
I even heard him agree to some kind of competition where...was it that Cub fans would get to "name" his computer or computer system?

Something like that.
Anyway, the above gif I hope can give you a little sigh of relief, feel a little purge, stuff like that. 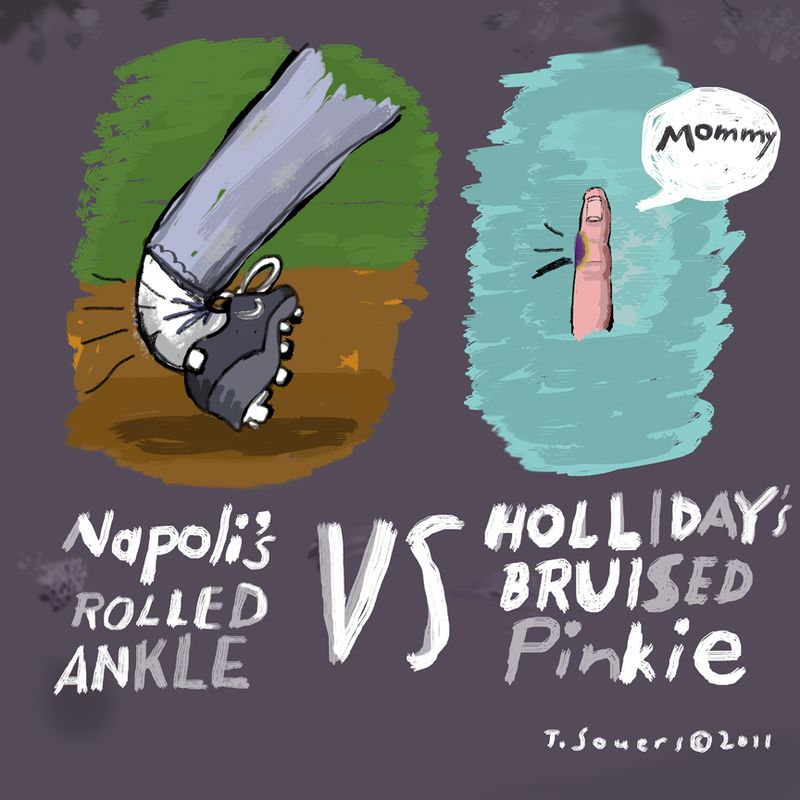 "What's the matter with Napoli?" I remember thinking.
He's rolling around on the ground for no reason whatso...
Then they showed the replay.
DID YOU SEE HOW FAR HIS ANKLE BENT?
Oh my GOD!
I fell off the couch making dog noises.
Just get a freaking stretcher and have a surgeon re-attach his foot.

But then he... stood back up.
Mike Napoli is made of stuff I have no experience with whatsoever.

Conversely, there's St. Louis' future Alfonso Soriano, Matt Holliday.
Here's what it says at St. Louis SB Nation:
"The St. Louis Cardinals will be without Matt Holliday for the rest of Game 6 of the World Series, after their star outfielder injured his little finger in the course of getting picked off at third base in a crucial bases-loaded situation in the sixth inning. The Cardinals outfielder has had an incredibly rough game, making a critical error that led to an early run and looking uncomfortable at the plate; his only solid play in the game was a brilliant takeout slide of Ian Kinsler that led to the Cardinals' third run."

Are you kidding me?
What a gamer Matt turned out to be.

But seriously, the above is a buncha nothin', because this was just one of those games that make you love the game of baseball, and I hope you were watching.
You experienced every single emotion you can have even if you're not emotionally attached to a single person on the field.
You saw every kind of play imaginable.
Errors and slop, brilliance and heroics, clutch hits and coming back from the dead.
And the Cardinals make it go the full seven, winning 10-9 in 11.

Didn't you think Josh Hamilton won it with his 10th inning 2-run dinger?
What a great story - guy playing with some sick injury we'll all know more about later.
But no.
Freaking Berkman ties it up in the bottom.
And this hometown kid David Freese from St. Louis - he turns out to be The Man with his walk-off homer to center in the bottom of the 11th.
Oh, and that was after he hit the game-tying triple in the bottom of the 9th on what I thought was the last strike of the season for the Cards.

Never thought I'd see a general manager elevated to rock star status.
Or "President of Baseball Operations" or whatever Theo Epstein's new title is with the Chicago Cubs.
Either way, oh MAN!
I could not be more excited, more happy, more re-energized about our favorite team than right now.
Well, a World Series title would be nice.

No pressure there, Theo.

Seriously, if he does what he intends to do - change culture, build from the ground up, all that... I will happily watch for summers to come.
How many?
Come on, man - we've been waiting our whole lives.
It's not like we're suddenly turning into Met fans if we don't win the series in 2013.

Meanwhile, how nice would it be for the Texas Rangers to take the 2011 World Series in St. Louis tonight?!
Never has Tony LaRussa been so personally on the ropes.
You gotta watch. 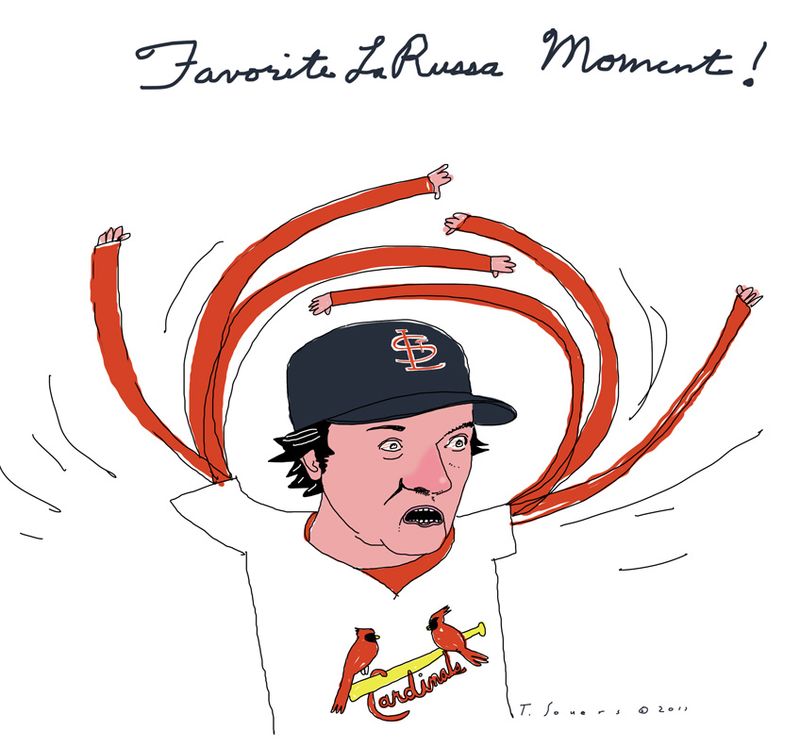 An absolutely priceless moment.
With Michael Young on 1st, Nelson Cruz on 2nd and Mike Rzepczynski on the mound, David Murphy hit a tiny little grounder to Rzepczynski - a double play ball I think. But Rzepczynski merely knocked it off course with his glove, and 2nd baseman Nick Punto was left holding the ball as he watched the bases load with Rangers.
And they cut to Tony LaRussa as he did this crazy arm flap thing with a look of absolute horror on his face.
Is it too early for a Halloween MWAA HA HA HA HA?

The Rangers, they haven't been so good with the gloves while the Cards seem to be doing everything right on D, and even though there was no Card error on this play, it was clearly a bad sign for Manager Tony.

Then Mike Napoli, who looks like a guy you'd like to have a beer with, smacked a double and knocked in the winning runs.

Texas 4 Cards 2, and now it's back to St. Louis for the final 2 games with the Rangers up 3 games to 2.
One more win for them, and 2011 is in the rear view, and you and I can concentrate on things like which Chicago restaurant Theo Epstein likes best.

Albert Pujols makes history, even if it's just the World Series. 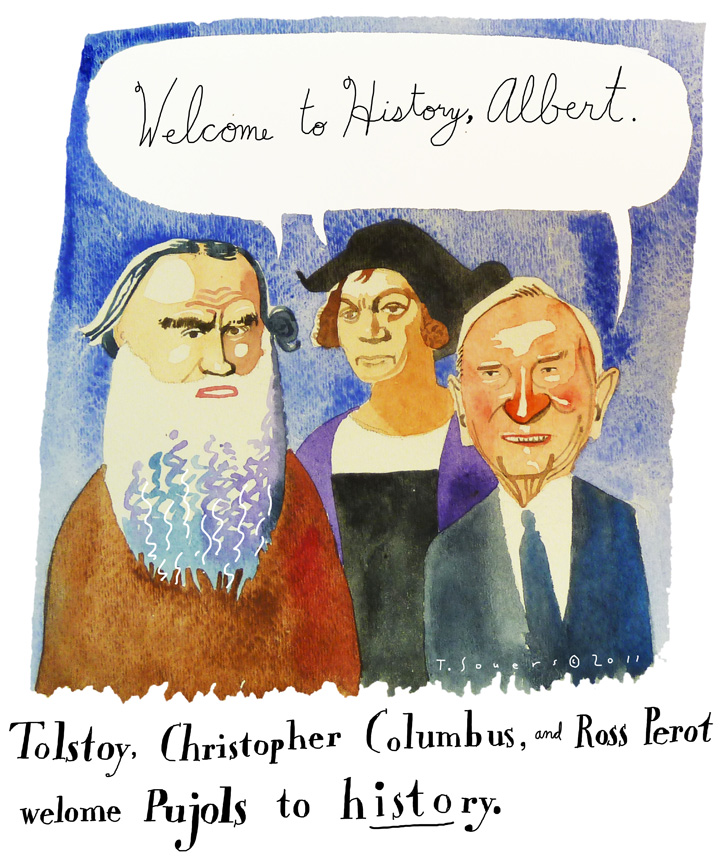 When Albert Pujols hit his first homer last night, didn't you think it was kinda scary?
Like, if you were in the stands and that ball was coming your way, you probably wouldn't have time to duck before it went through your chest like a cannonball, the guy's chest behind you, the seats, a beer vendor, the stadium, and finally out through morning in Beijing.

And he was just getting started.

The St. Louis Cardinals beat the Texas Rangers so bad last night it hurt my eyes.
Every facet of the game, too.
3 errors for the Rangers?
Man, you cannot win playing like that.
And hey Ron Washington - every time you do something stupid people think it means Tony LaRussa is smart.
SO QUIT IT.
If Yadier Molina is up with guys on second and third and first is open...WALK HIM!
St. Louis 16 Texas 7.
Cardinals go up 2 games to 1, and the experts say the winner of game 3 wins the series so...the experts must say Cardinals win.

But the big story was Albert Pujols gettin' all historical with 3 homers, 5 hits and 6 RBIs.
All of those things tied records made by guys with names like Ruth or Reggie.
Maybe the greatest single night with a bat in Word Series history.
Christopher Columbus said, "Welcome to history, Albert."
Russian novelist Lev Nikolayevich Tolstoy gave Pujols a signed copy of "War and Peace" and said, "Call me Leo."
And Ross Perot said something.
Can't remember what it was.

What else?
Hawks lose at home to Colorado... and the Bears play Tampa at Wembley in London.
Here's what it says at Wembley.com:
"London Game 5 features two previous Super Bowl Winners. The Chicago Bears, who have long been one of the NFL’s elite teams, have graced a sold-out Wembley Stadium before in 1986. The Buccaneers are loaded with young talent and have transformed themselves into potential Super Bowl champions!"