Remember when Barry Bonds flipped into the stands at AT&T Park? 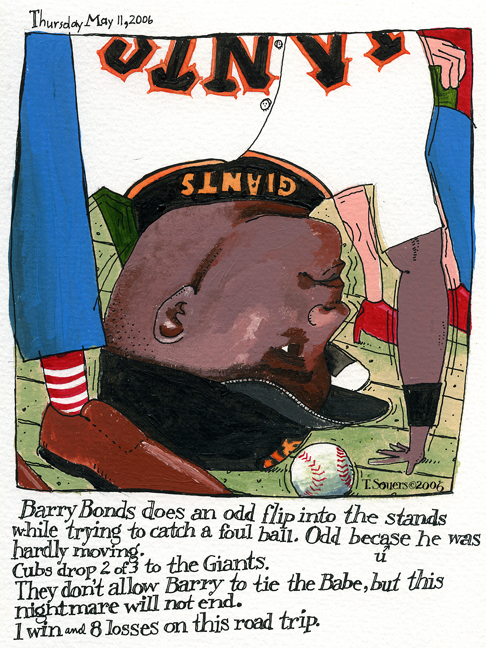 This is from 2006, when Barry Bonds was trying to tie Babe Ruth's homer record.
The Cubs were in the middle of a May when they would win just 7 games.
But I remember this play - left fielder Bonds moved like a 90 year old, shuffling over as he tried to catch a foul ball.
He gets over next to the wall and flips over like a top-heavy boiled sausage in slow motion.

Super busy, guys.
If I can't get to the current action I'll post something from way back when.

Speaking of, what is up with Aramis?
He obviously knows he's the only top tier 3rd baseman with a contract running out, so he wants to be attractive to other teams, right?
Guy is on fire.
Think the Cubs should try to keep him?
This from Rob G. over at The Cub Reporter: "apparently Aramis Ramirez 2012 option is a mutual option. Technically, if the Cubs exercise the $16M option, he can void it and forfeit the $2M buyout, and his agent suggests that with Hendry gone, that's looking more likely now.

I'm not sure if that's good or bad news yet. $16M for one season is a bit expensive for Ramirez, but there's not a lot out there to play the hot corner either."

Maybe they won't even have the option - maybe it'll be up to the New Guy at General Manager.

Whatever happens with the Cubs front office... it's just a pretty crucial and interesting time in Cub history.

This is the problem. Geez, they played great tonight! It sure was fun to watch. But this does not mean that the team should not be dismantled!

Ramirez is playing great! But I would not trust him for next year. He has been too hot and cold. I suppose if he is playing his option next year then he would be playing for a contract and would still produce. Maybe this year is because he assumes the Cubs will take the buyout and he will be a free agent so THIS is the play for a contract year.

My preference is the Cubs do not bring him back. The fewer old vets the better. Let's see the kids play and watch a contending team develop!!

Ha! What's the bet that five years from now I'll be saying "Sign those free agents!"

I don't know about just letting Ramirez go.
Living through a whole summer of Jeff Baker or Blake DeWitt might make us loony, but we'll see.
And yes, the only certainty with you and me, Rich, is I'll contradict myself 5 minutes from now (let alone 5 years).

As to Mr. Bonds inability to remain upright, it's probably because he was top-heavy after his head magically expanded due to his unexpected reaction to the "cream and clear".

As to the Cubs addiction to overpaid aging veterans...I'd like to point out how well that strategy has worked with Meltdown Bradley, Awful Soriano and Careless Zambrano!

Ahh, Barry.
I wonder where Z is?
On a beach?
Fishing?
Maybe Ill run into the guy at Montrose Harbor.
I wonder if he tweets?
Id sign up for that one...

I suppose Ramirez is preferable to Baker or DeWitt all summer. Isn't there someone in the minors that plays third?

I do not really know, but it seems like those teams that build from within don't wait until the guy is clearly ready for the majors. They bring guys up and let them learn.

I'd rather watch the kids right now. Don't sign Ramirez, don't sign a first baseman. Bring up the kids. They are just more fun to watch.

Josh Vitters was supposed to be the guy.
Hes not ready.