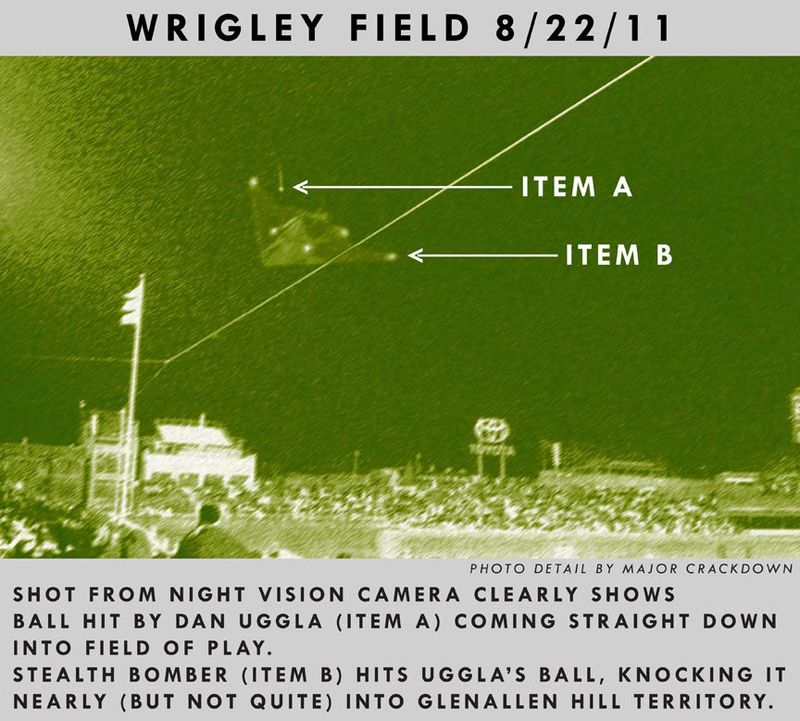 Maybe our Chicago Cubs lost to the Atlanta Braves zero to three, but Dan Uggla's "monster" homer was an absolute LIE!
Here's what really happened:

This last weekend Chicago hosted it's annual Air and Water Show above the beaches of Lake Michigan.
Apparently, a Stealth Bomber got lost in the air around Chicago.
Happens all the time, you just don't know it because you can't see them.

I have a friend in a certain department of the United States Air Force, Major William C. Crackdown, who was sitting behind the Cub dugout when Dan Uggla connected with the Ryan Dempster pitch.
Fortunately for Cub Fans, he had his camera-equipped ATN PVS7-3 Generation III Nightvision Goggles from Cabela's ($3,499.99).

He emailed me the above shot with the spooky government-like explanation attached.
Sure, the ball went up pretty high, but as you can see in Major Crackdown's photo, it was obviously coming straight down into left field when Stealthy the Bomber flew over and knocked the ball out onto Waveland.
(BTW, you're a complete dolt if you think you can hear a Stealth Bomber because...they're silent.)

So, you know, not that it would have made any real difference in the Win/Loss column, but as a Cub fan I'm sick and tired of being disrespected by...

Nevermind, I think I'm losing it.
Maybe too much CUB Cub stuff, even for me.

When Uggla hit that ball, he smacked it so hard it would have cracked the speakers in my surround sound if I had surround sound.
Did you see that thing?
I totally thought it was going on the roof of the Hill Building, and the ghost of Glenallen Hill's homer would finally have some company.

The Braves look pretty damned good.
Maybe the Cubs'll look like that in a couple years, eh?

Thank goodness for You Tube! Glen Allen's smash would take on the air of legend and become doubtful without the readily available film.

I love Major Crackdown's pic! Goes to show that every fan should be taking a $3,500 camera to the game (to night games anyway!).

Going to the Cabela's website...it's like a giant ad for the Army.
LOOK AT ALL THAT COOL SHIT, MAN!
Hill's homer = amazing.