It's that time for me again.
Left the house with house sitters and now...
Musky time.
When I do things like actually hook one, get it next to the boat, and then realize my net isn't big enough to get over it's huge angry musky head.

Not that I haven't tried to follow the Cubs...
But apparently the Brewers, even though they may be the hottest team in baseball, are still second banana to Green Bay Packers in Wisconsin.
I tried to listen to the Cubs/Brewers game a couple days ago, twisted the dial through all the radio stations, and each one had the Packer pre-season game on instead.
Anyway, here's what it looked like at about 5 something this morning: 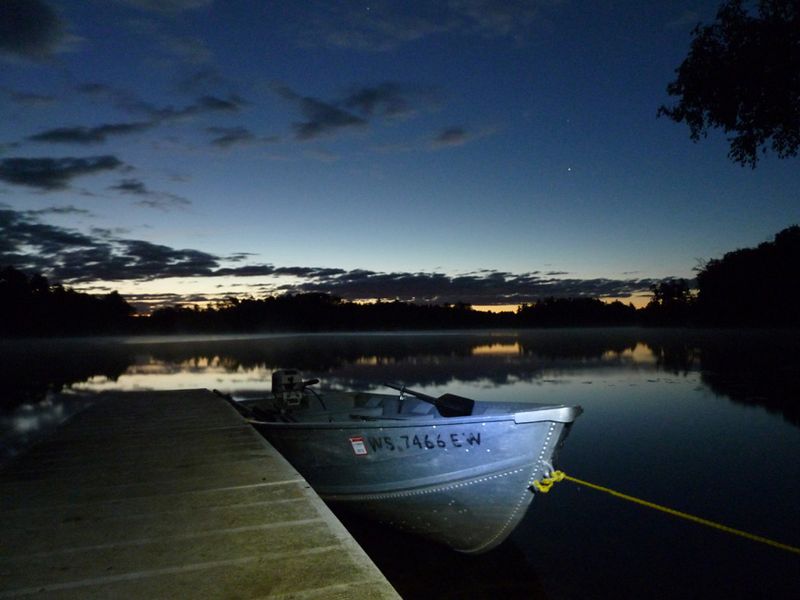 Pretty nice, right?
So...I spent hours and hours of fabulous morning quality time not catching a musky!
But I did see a beaver swim by:

That's me whistling - thought I could make it slap it's tail.

And then I saw an eagle.
It landed across the way, but I couldn't find it.
Suddenly it flew out of a tree right next to me and all the alarms in my blood went off because the eagle had no head.
It was like the The Legend of Sleepy Hollow - A HEADLESS HORSE-EAGLE JUST FLEW BY!
I spilled all my coffee.
Maybe it's some horrible omen: the beaver will attack or I'm about to catch some giant musky lure treble hooks in my neck.

Then I realized it was a big old owl.
Everything back to normal, still not catching any musky.

So anyway, that's what I'm doing.
Excuse me for not talking about the latest Cubs loss to the Brewers.
Man, can those guys play.

When I got back from my fishing excursion this morning, there were a couple guys just getting in their boat to go out.
One of them shouts, "Have any luck?"
"Of course not, assholes!" is what I thought.
But instead I said, "No, but it sure is a nice morning! Have a good one!"

Just wait til I nail that musky.

Good luck, Tim! If you can catch that dang musky, we can call the summer a success! We are counting on you! Great photos, and I loved the beaver video. Especially when you whistle. It made me laugh.

Ugly baseball lately, so you are not missing a thing. Mark and I joined Todd Rickett's bicycling group on Saturday, which means we rode our bikes from Wrigley Field to Miller Park to watch the Cubs lose. It was a challenging 100 miles, especially since we were blessed with a north wind that we battled most of the way. Took us over 8 hours! But the coolest part was the start of the ride--we started just outside Wrigley and got to ride our bikes into Wrigley through the left field entrance, along the lower level concourse then out the front entrance. How many people get to say they rode their bikes in Wrigley Field? If they had just managed to win the game, it would have been a perfect day.

I want to see BIG FISH pictures! (Having a fisherman for a husband has taught me that the picture is what it's all about!)

I LOVE the boat! Great video of the beaver!

You can be sure you are not missing anything as far as the Cubs go.

Oddly, I was watching the Packers instead of the Cubs myself.

Wow!
Bike trip sounds incredible, esp the Wrigley part.
Wind, not so much.
I shall not disappoint in at least the effort involved in catching beeg feesh.

Its so funny because people I talk to up here, this is pre season remember, theyre all, OH IT WAS SUCH A GOOD GAME!
Packer fans.

We are all walking around with visions of repeat in our heads.

It was not all that good a game until the last couple of minutes. The ending WAS fun to watch. Pre-season? Packers fans did not enjoy it any more than Caldwell suffered it.

I dont know who it is, but apparently they have a killer 3rd stringer at qb.
How do the Packers do that?

Part of it goes back to Favre and Rogers falling in the draft to the Packers where he could sit on the bench for three years and learn the system.

With Rogers out there, Matt Flynn has spent three years on the bench learning the system.

I think McCarthy gets credit too. Apparently he is very good at developing quarterbacks.

I suppose if Rogers went down, the team might be able to win with Flynn, but if Rogers AND Flynn go down, I do not see Harrell taking the team anywhere.

Probably more than you wanted to know.....

Thats what I mean.
How come the Bears have Caleb Haney or that other guy I cant remember?

I don't know that one.