Remember how awful winter is? 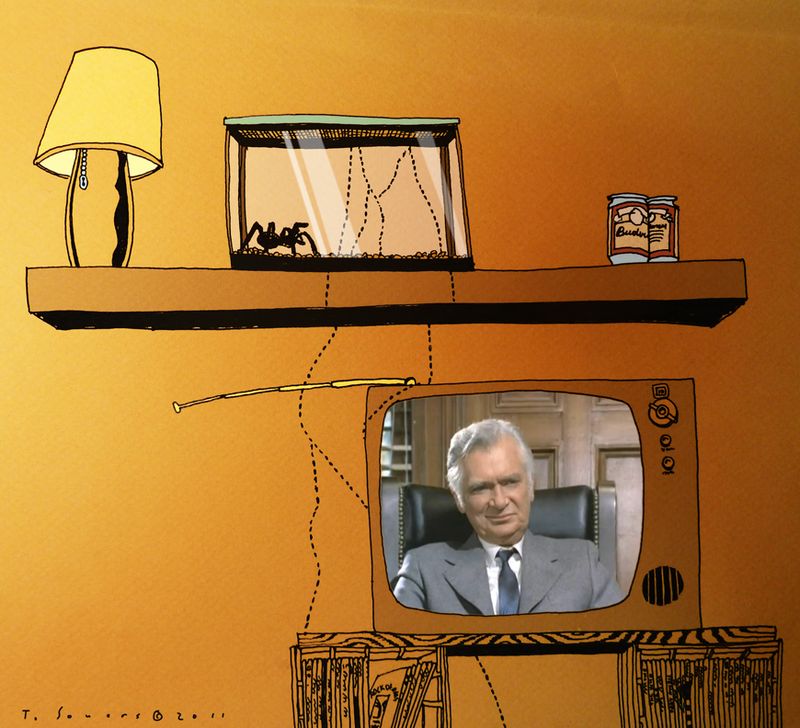 Okay, lets get this out of the way: did you know the Cubs lost yesterday?
To the Cardinals in St. Louis?
Well, it's true.
And Sunday might be the wrong side of sweep number 2 in a row for our struggling favorite team.
But instead of talking about that, I was trying to think of something good about this summer, and I finally figured it out.
IT'S NOT WINTER!

Yep, it's been pretty hot and the New Storms have been weird and scary, but still.
I can remember just a little bit ago when we had the blizzard and I borrowed Frank's snow blower and attacked half an alley with it and nearly died of a heart attack from over-exertion.
How did I survive?
I thought, "If I die, I won't have seen the Cubs win a World Series!"
So instead I lived.
To tell this story.
About winter.
And winter is okay but most of the time it's like kneeling on tacks.
Way back in the 80s, I used to live with my brother and this other guy, Jay, in a courtyard apartment at Cleveland and Fullerton.
My brother was coming back from a visit to Sedona, and, this is true - it rained that day, and sometimes when it rains in Sedona, tarantulas just start walking around on the roads.
Not making that up.
So Grog, that's his nickname, is driving with my dad to the airport.
They're not out of Sedona yet, and Grog spots one.
"Hey stop, I wanna put that tarantula in my suitcase and see if it survives the trip." he says.
He checked his bag and flew.
He came into the apartment, opened his suitcase and out walked our newest pet.
Probably it was named "Barnaby Jones" because he used to name his pets after detective shows.
We put it in an aquarium with a screen top.
Do you know what you feed tarantulas?
Neither did we.
Grog actually braved the frigid Chicago winter to go all the freaking way to a pet store and find out.
Crickets.
So he buys crickets.
We put some in with the tarantula and...nothing happened.
But over the next couple days he must have eaten them because there were sort of dead hollow cricket skins in the aquarium.
So Barnaby Jones lives with us for awhile, eating crickets.
It's fricking freezing out, so usually I'd come home and not go out again.
Watch tv or something.
And one day watching the tube, I look up and SERIOUSLY freaked out because the aquarium had cracks in it!
I thought, "BARNABY JONES CAN CRACK GLASS! He's the most frightening tarantula of all time."
I approached the aquarium with caution, because tarantulas can jump like 40 feet and sink their horrible teeth into your neck.
But as I got closer, the cracks seemed to...what the hell?
They're moving.
The cracks are moving!
They're moving because...THEY'RE ALIVE!
And they were alive because they weren't cracks at all.
They were actually thousands of little teeny tiny baby crickets all walking in perfect little lines up the glass on the inside of the aquarium, under the screen top, and down the glass on the outside and into the apartment.
Apparently Barnaby Jones didn't eat his dinner one night and instead his dinner made babies.

Here's the other thing about crickets: it's bad luck to kill them.
If you know anything at all about me from reading this blog, you know I've got a little superstition problem.
I caught as many as I could by sort of getting them on a piece of paper, running to the back door and shaking them off.

Shortly after that, Barnaby Jones died, leaving the spawn of his dinner to haunt us all winter long.

So as you watch these hideous Cub games repeat themselves over and over and over, just imagine it's FREEZING COLD outside and your whole apartment is going EEEee EEEee EEEee from bugs you cannot kill.

Okay maybe the Cubs are worse, but still at least it's not winter.

PS: I took the family to see "Cowboys and Aliens" instead of watching the game, and apparently I missed a Matt Holliday slide into Starlin Castro that looks very questionable online.
What the hell happened, guys?

PSPS: btw - the movie had me hooked with the trailers that came out last Christmas, but it's really a messy bunch of nothing. Just...not very good.

I was wondering when Aramis Ramirez might realize the place is on fire.
You're an older guy...tail end of a contract...it's obvious the Cubs are gonna rebuild...and you hear rumors you that teams with a shot at going all the freaking way actually want you? And you pull out your no-trade clause?
Well, yesterday he finally said maybe it would be okay to go.
Here's the article in the Sun Times.
I'm not sure what it would mean to us Cub fans, since minor league 3rd base hopeful Josh Vitters still seems to be a ways away, and the idea of ohhh, Jeff Baker (or worse, Blake DeWitt) as the starting 3rd baseman seems like a really awful drop in power.
Maybe they get something in return, or maybe they just want to get rid of big contracts, or maybe just lose the guys they don't see hanging around for much longer anyway.
But if I'm Ramirez, I would bolt to a contender in about a second.
He has a chance to be a difference making piece, a chance at real glory.
See ya.

Kosuke Fukudome and $4 mil got sent to the Indians for 2 prospects - probably a no-chancer and a maybe.
Personally, I'll be glad to never see those stupid head band things again.
One time I went up to one of the guys selling them with my camera up to take a photo, and he turned his head around every time I re-positioned myself to take a shot.

Anyway, pretty interesting times, and I think we're kind of breathing a sigh of relief that the trading has begun.
Awesome that Tyler Colvin will supposedly get a real chance to prove himself for the rest of the season in right.

I wonder what songs Paul McCartney won't play at Wrigley?

So, you know, sometimes these things write themselves.

Anyway, another loss, another Carlos Zambrano priceless quote.
I wonder when he figured that out?
The "there must be change" thing.

Okay, super busy, hope you get a laugh.

And even though the posts have gotten negative, I hope you all still realize how much I love the Cubs.
Can't help it.

Well, this season?
Probably too much to ask for that 4th straight win.
Cubs lose to the Brewers in Milwaukee 2 to 3.
Super busy or I'd talk more about Demp's nice start and the bullpen's nice effort.

Three Cheers for the Chicago Cubs! 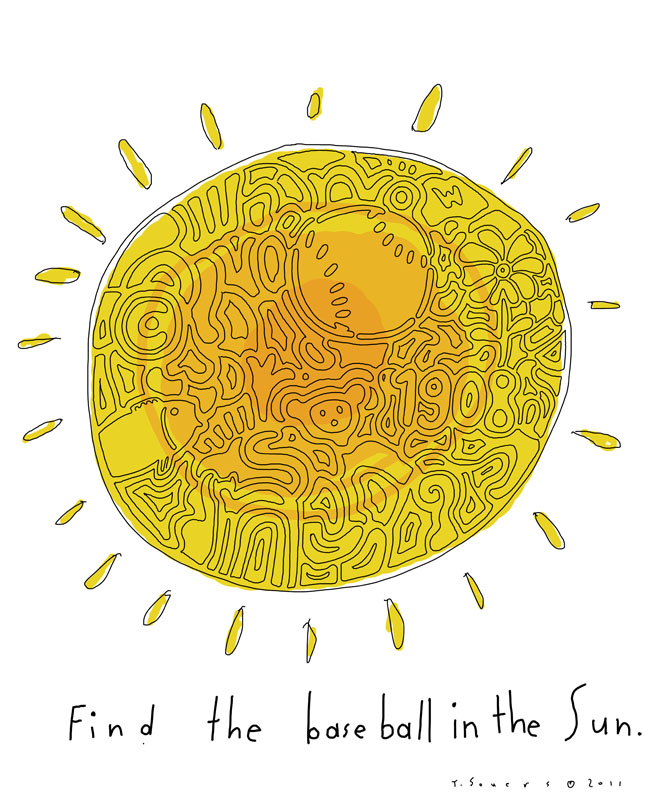 We're all familiar with the Baseball Gods, right?
Introducing Ra, God of the Sun, who hexed Hunter Pence in the 10th with the vexing puzzle above.

With the score tied in extras (meaning no way does Garza get a well deserved win, meaning some schmo came out of the pen and gave up a 2-run dinger to Axis of Astro Cub Killer Carlos Lee so, you know, just awesome, Jeff Samardzija), Marlon Byrd hit a high fly ball to right field which Hunter Pence lost in the sun.
So with nobody out, Marlon was standing on 3rd.
Nice.
Geo strikes out.
The Astros intentionally walk Campana and Barney (what's that say about Geo?)
Jeff Baker hits a liner down the 3rd base line, and we all get to say "HIP HIP HOORAY!", which I believe is how you do the "three cheers" thing and even if it's not lets pretend it is because that's today's headline.

3 cheers.
You know, for the 3 wins in a row.
And now...dare I say it?
Can the Cubs go for FOUR in a row?
Tune in tomorrow night from Milwaukee with Demp on the mound.

No Threes for Cub Fans until...

That's right, Cub Fans.
I'm asking you to make a semi-supreme sacrifice today and refuse anything that has to do with the number 3.
There's just some kind of bad karma thing about that numeral.
Maybe if we stay away from it, even just til 2:20 today, the Cubs will finally win 3 in a row.
So...nothing with threes.
Like, even if it's past noon you not only must you stop at beer #2, but it cannot even be a beer from Three Floyds.
And that's a big ouch, because a cold Alpha King is one fabulous brew.
You go golfing, you gotta skip the third hole and stay away from the par threes.
Reading something to the kiddies?
No Three Little Pigs, no Three Blind Mice.
Actually, you could make that two and that should be fine.
Have you ever seen such a sight in your life as two blind mice?
Me neither.
Goldilocks?
She only gets to choose between the too-cold and the too-hot porridge, because the third bear isn't there.
You can listen to 2 Doors Down, 2 Dog Night, and 2nd Eye Blind.
3 Mile Island?
Never happened.
Reading, riting and rithmetic?
Pick any 2.
No Pep Boys, no Musketeers, and worst of all no Stooges.

Come ON, Cubs.
You get the three today.

Oh, and by the way, it's Matt Garza against Astro rookie Jordan Lyles who's zero and 5.
His debut was against the Cubs in May, and he gave up just 5 hits and 2 runs in 7 innings.
The Cubs were up 3-1 in the 9th and gave up 6 runs.
Soooo...there's that.