Cubs vs Cardinals. SO not fair. 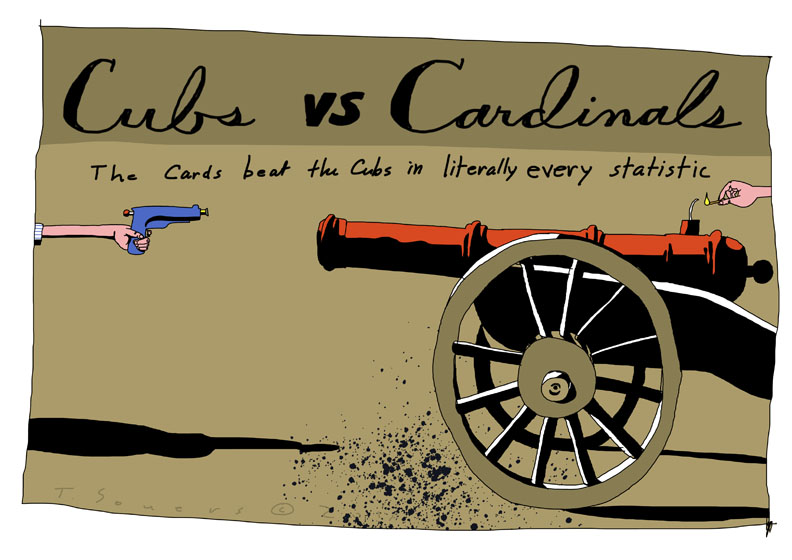 Oh my god.
When's the last time you took a gander at team stats?
Hitting - the Cards lead the N freaking L in almost every single category.
Pitching?
The Cards beat the snot out of the Cubs in everything.
This is just so unfair!
The only thing the Cubs beat the Cards in is strike outs, which is good for pitching but bad for hitting.
(Cub pitchers have gotten 265 strike outs to 238 for the Cards, Cub bats have whiffed 227 times to the Cards 212.)

But the Cards are WAY superior in literally every single stat: ERA, SV, QS, BA, SLG, OPS, and OMG the Cubs are gonna get their asses handed to them.

What's wrong with that picture?
No Albert.
Freaking Albert Pujols has been sleeping all season.
What if he wakes up?
We'll bring in Jeff Baker?

I read awhile back that in St. Louis, the Reds are the real rivalry.
The Cubs are sort of laughable entertainment - like a cartoon before a movie, an appetizer.

But...heeey.
Wait just one statistical minute.
There IS a reason they play the games, and that's because of a little-known stat known as ADT.
Because Any Damn Thing is possible in a baseball game.
Of course, so far ADT refers to LOB for the Cubs, but maybe, just maybe something good happens.
We'll just have to see.
In fact, I think I'll go myself.