I'd be lying if I said I wasn't super excited about Alfonso Soriano's 2-homer performance last night, or his Cubs record-setting 9 April home runs, but I'm just wondering...

Do you believe them?
Sure they happened alright, but will they keep coming or is this his hot month and the rest will be fours and fivers.
Looking back at his Cub years, he started out as that streaky freak: in 2007 he had 11 homers in June along with 14 homers in September. In 2008 he had 10 in May. Then he started to un-streak somewhat. In 2009 his high month was 7 in April, and in 2010 he had 6 May homers.
Not perfect streak research of course (what about a streak that starts late in one month and continues into the next), but you get the idea.

Now he's got 9 in April, history would suggest that this might be his high month, right?

So, on one hand his homers are probably telling the truth, and he'll do less as the season goes on.

On the other, what if this is just the beginning?
What if there really is something to the time distance from his last injury, and he has some kind of serious resurgence?
Move him up the order some, and maybe the RBI total goes up too?
Right now he's got the 9 homers but only 18 RBIs, which is exactly 8 more than Aramis Ramirez, and 13 more than Marlon Byrd.
18 RBIs is also only 5 more than Darwin Barney's 13.
All of those numbers are weird and sad.

It was good to see Z get back on the winning track last night, although I totally thought he would blow up a couple times either at the home plate ump or himself.
Plus seeing Wood/Marshall/Marmol wolf down the last 3 innings was a pleasure.

And I think I speak the truth about us all when I say it's no lie we'd like to see Matt Garza get his first Cub W.
Go Cubs! 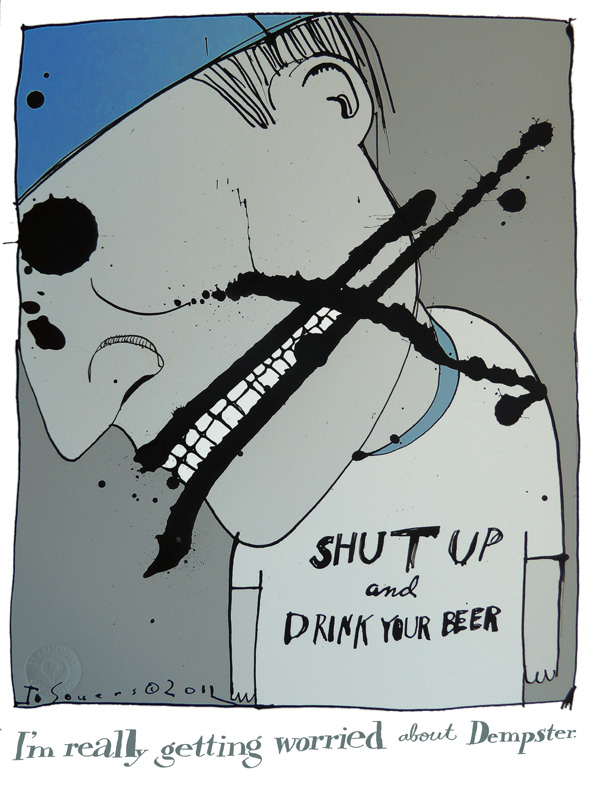 Here's what happened last night.
I know it's a little early for the game, but think I'll turn on the tube anyway.
Who knows what channel will come on when you first turn it on, right?
It's "The Office".
And the second it comes on my wife comes in the room and she's very excited because it's the last episode with Michael (Steve Carell), because he's leaving the show.

I know this show will go later than the Cubs game, so oh well, I'll just miss the pregame and beginning.

When I finally turn the channel, it's the bottom of the first and the Cubs are down zeero to 7.

I didn't even get to experience the joy of anticipation, the wonder of a possible gift, the birth of a new game.
No.
For me, it starts out in Dempster's Inferno and the fire spreads from there.

What's up with Ryan Dempster?
7 runs and he lasts one out?
His velocity was down, and he was out of sync?
Man I hope that's all it is, because he hasn't looked right all year and his early stats are embarrassing for such a dependable, awesome pro.

And of course fearsome weird-hair Barry Enright goes 6.2 innings and holds the Cubs to 5 hits and 2 runs, although when you get 7 runs in your pocket, it takes that pressure off.
Cubs 2 DBacks Eleven.

Tonight it's Big Z vs. 3-1 Armando Galarraga, and I will have the game on from the start.
Maybe Carlos can be the "stopper".
Nobody's said it officially yet, but with the taxed bullpen and crap performance from the starters you have to think the Cubs will bring up Jay Jackson for a start pretty soon.

Lastly, big shoutout to Bears GM Jerry Angelo and his shrewd staff screwing up a trade and hosing Baltimore. 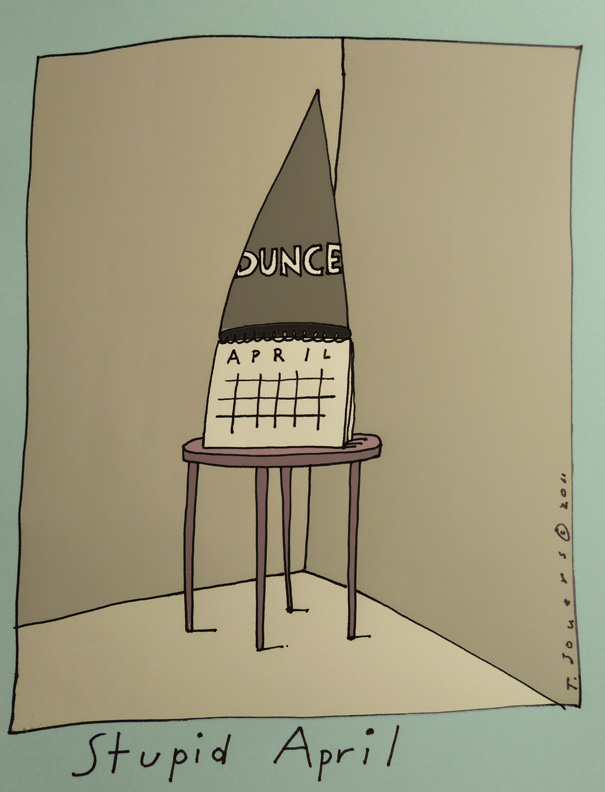 Whoever the guy is that makes the MLB schedule is either stupid or mean.
"You know what would be funny?" he says, "We'll have the Padres and Diamondbacks and Dodgers play in Chicago when it's 40 out! HAHAHAHAHAHA!"
I went to the opener and following Pirate game, the Saturday Dodger game on the 23rd, and this last Monday night's 3-5 loss to the Rockies.
The Dodger game was good, but the others were miserable - Monday night especially.

Scheduling all those teams is difficult, but flopping the games with the West Coast teams seems like... don't they have computers that can figure this kind of stuff out?
Shouldn't MLB have a scheduling computer program that's as smart as their stats-keeping programs?

Oh well, they got rained out yesterday which is good.
The less games they play without Randy Wells and Andrew Cashner the better.
And now they're in Arizona, then Los Angeles, and back here for the Reds.

Both the Cubs and DBacks are 10-13 and second to last in their respective divisions, although AZ just took 2 of 3 from NLE first place Philadelphia.
Maybe warmth will creep into Cub bones and tonight Ryan Dempster can get out of his mediocre-ness, and the bats can string something together...

Anyway, glad to have April basically in the rear view.

Well, I figure this is about where they'll hover, these 2011 Cubs.
Somewhere around .500.
But if they want to hang around here, they can't have giant losing streaks even if they're missing 3/5ths of their starting rotation.
So a victory today would be nice from young Casey Coleman.
That's if they start the game.
Looks like crap out.

Congrats to the Bulls.
I give a standing "O" to the Hawks for hanging around waaay longer than anybody figured.
Toews' pass in overtime was The Big Chance, but Sharp shot it pretty fat and Luongo blocked it easily.
Corey Crawford was a total God, withstanding barrage after barrage.
Except for him, the Hawks should never have made it to that overtime.

And then there were the Cubs, unable to take advantage of the wind and dropping game 2 to the Rockies.
Maybe they won't get swept, and their view can change...

Lotta people think something's wrong with his back, they say he injured himself in one of the earlier playoff games.
But for Roberto Luongo, that ain't nothin' compared to this.
The Chicago Blackhawks have gotten into Luongo's head.
This is from a story in a Canadian paper, thestar.com:
"Local sports psychologist Paul Dennis, the former Maple Leafs coach who teaches the subject at both Toronto and York Universities, said the beleaguered netminder must focus on the “challenge and thrill” of playing a Game 7 and avoid thinking about the pressure he is under.

“If he is in fact thinking those thoughts, he’s going to implode. What’s he’s doing is bringing tension to an already tense situation. That’s very unhealthy. It’s not going to help his game. He will have trouble sleeping. His sleep patterns will be off. His diet will be different. If he’s beating himself up mentally, he’ll feel drained. He’ll feel tired, he’ll feel lethargic, even though he’s in great shape.”

Good God!
How would that make you feel if you were Luongo?

You know the story - the Canucks won the first 3 games, series is over, right?
But in the last 3 games, the Hawks have scored 16 goals to Vancouver's 5, and along the way Luongo got yanked in games 4 and 5, and then sat for game 6 until Cory Schneider did complete cheerleader splits and had to be helped off the ice (I think they're calling it "cramps" in Canada, but I'm tellin' you that guy shouldn't be allowed to walk for days).

So you gotta stay up late tonight and see what happens.
It's been very physical, and a ton of fun to watch.

At 7 you can start with the Bulls squashing out the Pacers, or see another dreary/cold/wet Cubs game with poor James Russell starting again.

We went last night, and in the first you thought man do the Cubs have Esmil Rogers' number.
Darwin Barney got his first homer, a 2-run shot into the left field basket, and we were 10 rows behind the Cubs dugout so it was fantastic to see the joy on his face when he came back to the dugout.
I'm sure everyone's gonna be talking about Castro's triple-E inning, and all I gotta say is the conditions absolutely sucked and he's our kid so cut him some slack.
Kosuke Fukudome went 5 for 5, just smacking the ball wherever the pitch told him to.
If he lives up to his reputation, we've got about 4 more days of that and then...well nevermind.

Here are some shots I took with my i-phone and some camera app with weirdly cool filters: 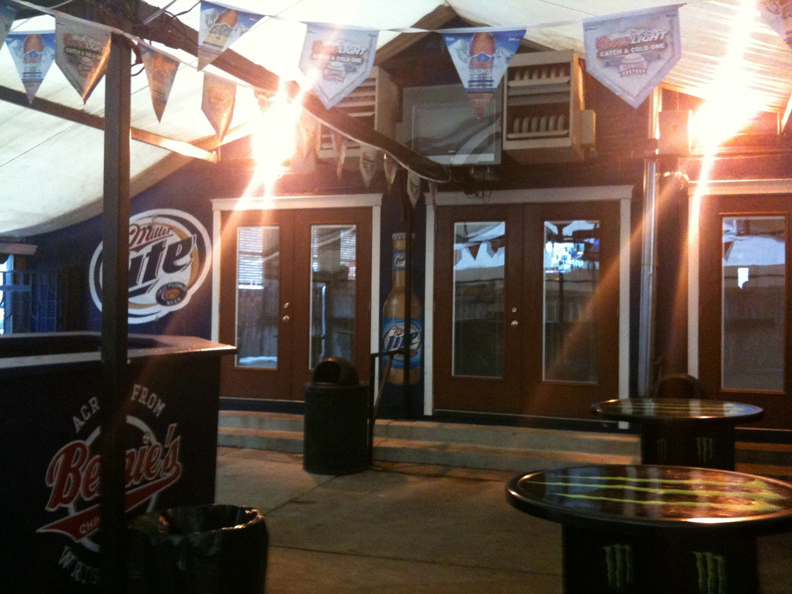 Nobody was in back of Bernie's. Had a lonely brat anyway. 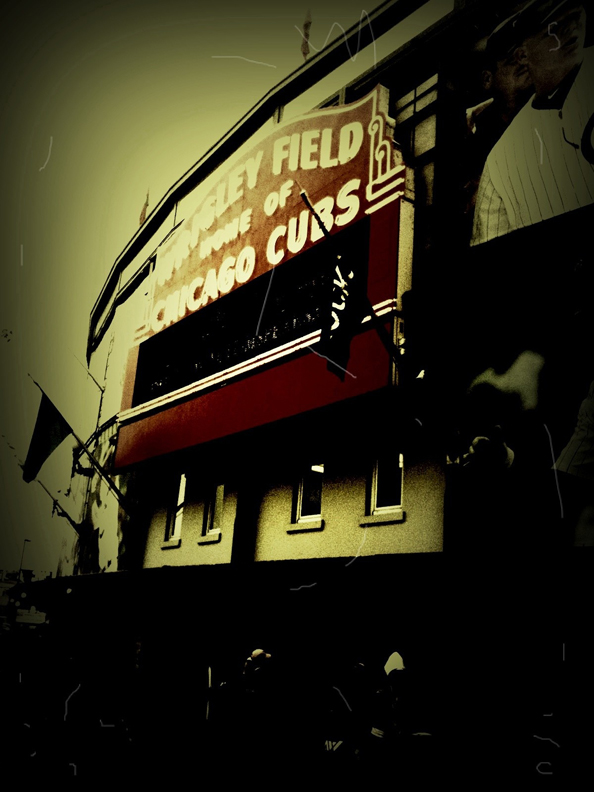 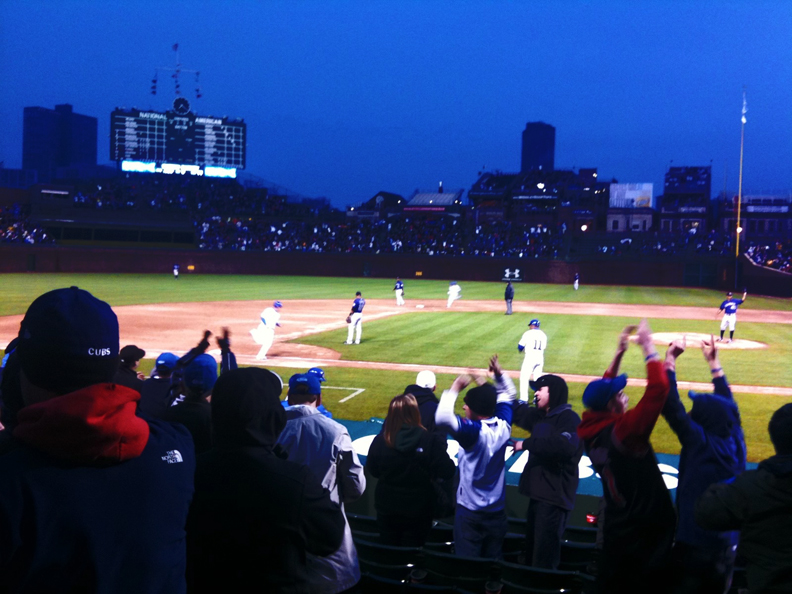 Here's Darwin Barney rounding 2nd after his 2-run homer in the first. 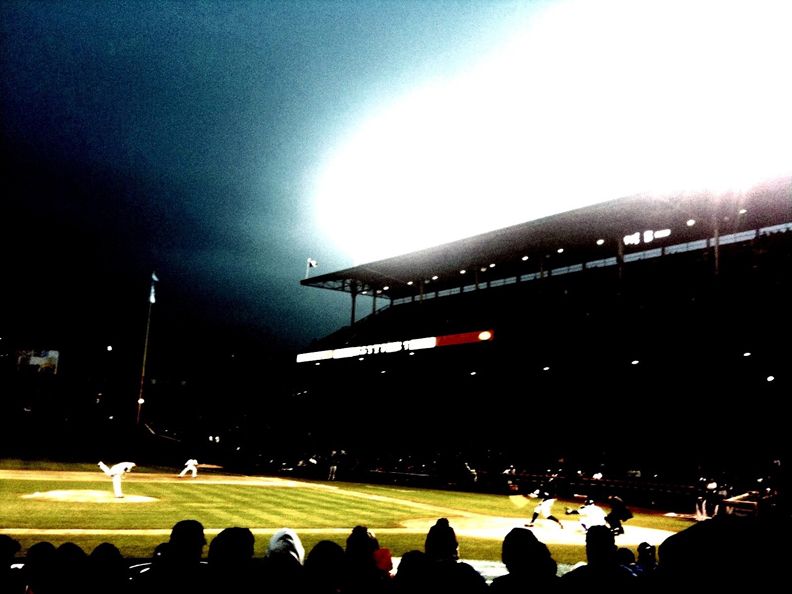 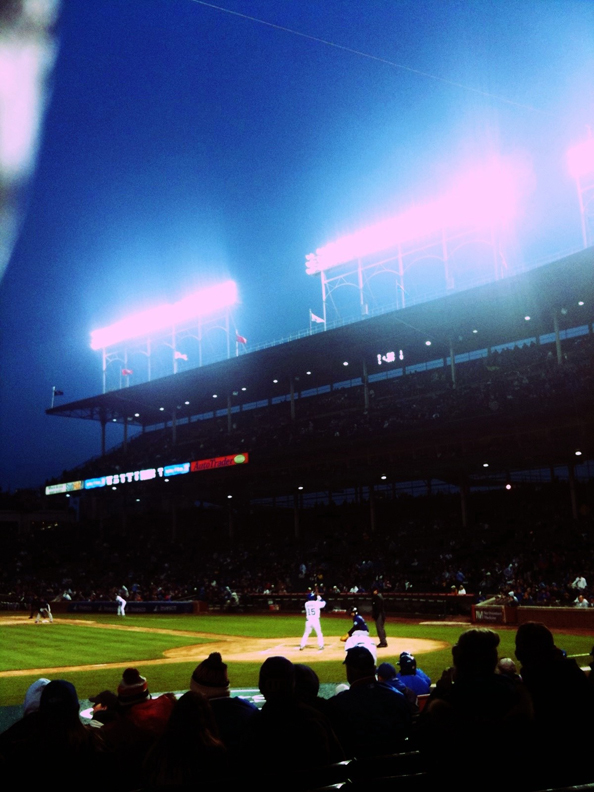 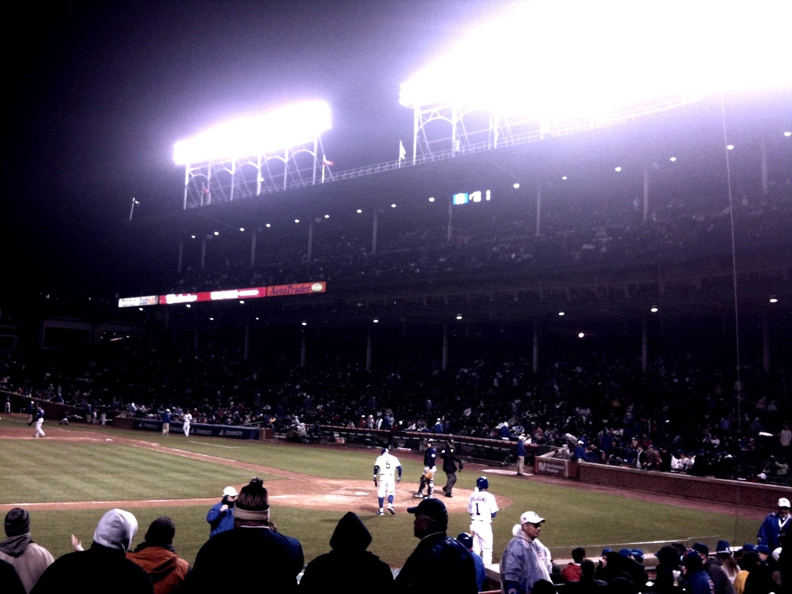 Reed Johnson steps up to the plate. 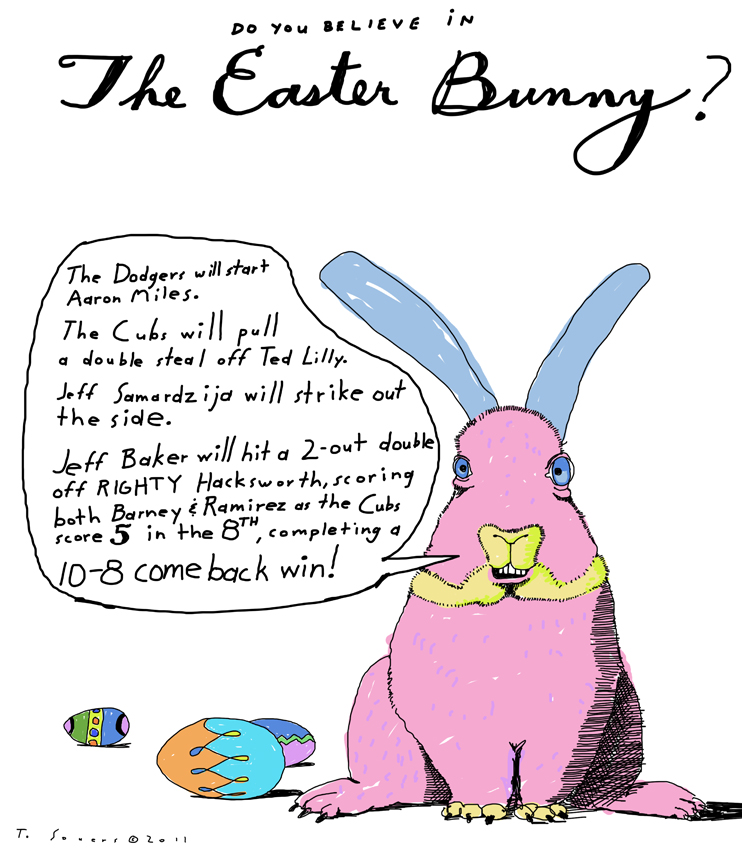 Other than Terrible Ted and Ryan Dempster both not bringing their best, this was one truly enjoyable afternoon at Wrigley Field.

Although some of the stuff I saw didn't make sense in the real world.

Like when the Easter Bunny hopped up in the chair next to me.
"Watch this." he said in the 3rd, "Barney and Byrd are gonna double steal."
They did.
"Do you believe that?" says Easter Bunny.
"No." I say.

In the top of the 5th, Dempster did not look good at all, giving up homers to Blake and Kemp and now the Cubs' lead was only one. And I'm thinking probably Dempster is done.
But in the bottom half, there are two out and the bases are loaded and WTF?
Dempster comes up to bat?
That's when the Easter Bunny says, "Don't worry, man. Quade knows what he's doing."
Even the guy in front of me says, "No he doesn't."
And Demp strikes out.
Bunny says, "It's cool. You gotta wait til the 8th."

Which was good because then Demp gives up the tying home run, he's relieved by Sean Mashall, Andre Ethier doubles scoring 2 more and by the end of the 7th the Cubs are down 5-8.

So do I believe in the Easter Bunny?
Well I do now.

The last thing he said as he was hopping away: "If you're lucky, I'll hang around til October."