Google Earth is so amazing.
Did you know you can use it to not only find anything on Earth, but also to predict the weather?

I can't BELIEVE that tomorrow, the 2011 Cubs Home Opener...it's supposed to be a high of 57 and, as you can see from the map above, not a cloud in the sky.

Except for where I sit.

So, you know, no flip flops yet but I'm expecting to pretty much just walk around in shorts with a light jacket and the hell with the gloves and hot chocolate this year, man.

You should totally do the same.

Okay, see you all out there on Opening Day, tomorrow,
on April 1st.

I can't wait to see Kerry Wood pitch for the Cubs again. 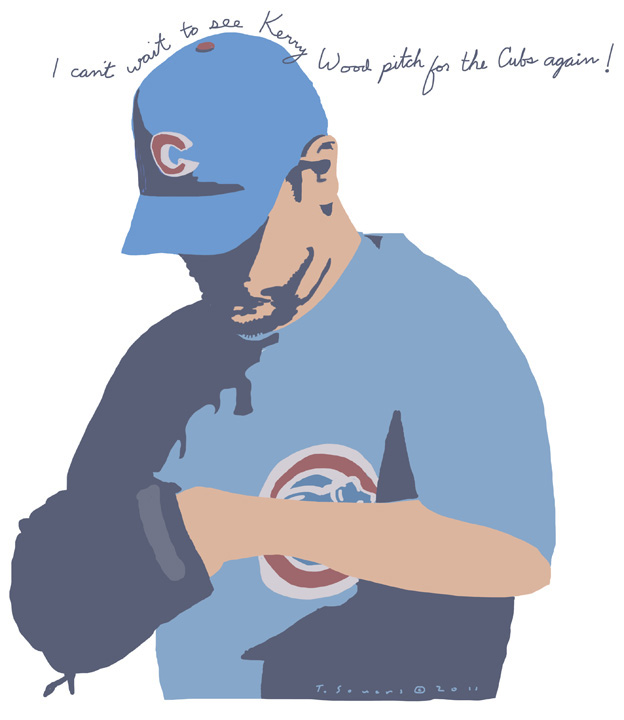 Of all the things that happened with the Cubs this last year, or actually you can go back years, nothing is cooler than Kerry Wood coming home.
Nothing.
To think that maybe Friday's game goes Dempster thru 7, Kerry Wood for the 8th, and Carlos Marmol for the 9th?
At the home opener?
Man, I am lookin' for the Bud Man in the 7th because I ain't going anywhere.

Honestly, home openers are different.
They're always crap weather and the crowd isn't really there for a baseball game - it's just a big ol' party with a game goin' on.

Nothing wrong with that.

I'm usually out of there by the 5th or 6th to go warm up over at Bernie's or someplace on Southport with my prized new fridge magnet schedule in my pocket and, you know, later I get to say I was there.

But Friday will be different.

I am NOT nervous about Matt Garza's Spring.

Okay so maybe a little.
Nervous.
Just a "tad".
A pinch.

I got in an elevator with co-worker Katie Goodhew.
She said, "How's it going?" and I said

Seriously, everything's completely cool.
There is no reason to worry.
At all.
It's just spring ball, man.

Does not even count.

Baseball cliche: "You can never have too much bitching." 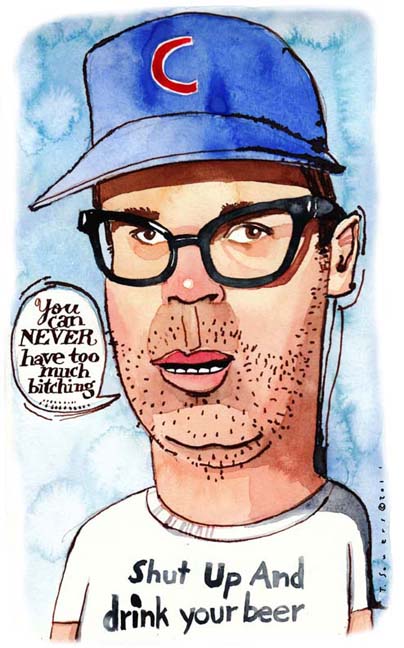 With all the fun the Cubs have had with the Carlos Silva thing - the drama, the cut, the bitching - I gotta tell you when you look around we are SO lucky nothing serious has happened.

The biggest bad (or good) thing to happen to another team is of course the Cardinals losing Adam Wainwright for the season.
And that bad thing has a domino effect, of course, since they REALLY have to depend on Jaime Garcia as their 3rd starter.
But he's apparently going screwy when things don't go his way.
This linked article asks 5 beat guys what their biggest concerns with the Cardinals are, and for instance Derrick Goold says, "What stands out about Garcia’s struggles this spring is how he’s reacted to adversity within games. Groundballs are going to get through. A certain out could find its way to a single. Garcia has to find a way to maintain his concentration..."
Sound familiar, Cub Fans?

Here's a snippet from some Cincinnati paper:

And there's also the trouble in Milwaukee with Zack Grienke and his cracked rib.

I read the other day that Darwin Barney can do a back flip.
Hey Darwin, look around you brother, and imagine a Trib headline that reads, "Barney out with back spasms after attempting backflip."

Right now the only bad thing the Cubs are feeling is Jeff Baker's hammy, and that's supposedly not even that bad (but remember, he's about to start playing in freaking Iceland, Illinois come Friday).

And the Cubs rotation looks pretty good - Dempster, Z, Garza, Wells and Cashner - and Casey Coleman staying stretched out down on the farm just in case.

So keep your fingers crossed, because "You can never have too much pitching" is a cliche for a reason.

ps: I added a link on the right to the newborn Obstructed View blog. Here's their "About" page. You can see it's like a star team of people from some of your favorite Cubs blogs - Aisle 424, Another Cubs Blog, and And Counting - and they all got together at one place, the blog is gorgeous and sure to be entertaining, insightful and fun. Please check it out.

psps: How awesome was it watching Marian Hossa score the overtime winning goal vs. the Red Wings last night?

Putting the Cubs on Doodle Jump would ease ST angst.

Don't know about you, but with all this prolonged and intense ST Cubs scrutiny, my brain hurts a little.
The Carlos Silva thing - whether you think he was fairly treated or not - I'm just glad it's over.
Yeah, drama always makes things fun, but there's enough to worry about besides that guy.
So much so, I decided to shut my mind down for a bit by playing a little Doodle Jump over the weekend.
Which is when it occurred to me that it would make an awesome Cubs game:

When you miss a base and fall, you'd hear the Ron Santo "OH NOOOO!" call instead of the slide whistle.
Of course they'd have to get MLB approval and all that, so it could never happen.
But it would be fun.

Okay, back to your regularly scheduled programming.
Nyger Morgan is a Brewer.
The Cards are not interested in Silva.
The Yankees are not interested in Silva.
Jeff Baker is being handled carefully with the hammy, but should be ready for opening day.
Jeff Samardzija will get a trim.
Wrigley Field food: they're going back to Vienna dogs.
Lastly, Mark Riggins' handling of the Silva demotion - the "let him down easy" way.
I'm totally giving Riggins the thumbs up because of Carlos' heart thing.
What if he'd just said, "Carlos, everybody thinks you suck and there's no place for you on the team." and then Carlos grabs his chest and turns purple?

I'd have handled it exactly the same way.

So the Cubs not only didn't offer Carlos Silva the 5th starter slot, they didn't even offer him a place in the bullpen.
In fact, all they offered was the opportunity to go to Triple A if they can't trade him.

And if I were Carlos Silva, well I'd feel completely blindsided too.
I mean, go back a little for persective.
5 wins and 18 losses over two years with Seattle.

Oh wait, so don't go back that far, and lets not bring up the $20 something million he made those two years.
Because in 2010, he had 8 wins in a row to start the season for the Cubs!
See?
He turned it all around!
Then, well there were just 2 more wins in 2010, but he had the heart thing.
And yes the heart thing might have something to do with the way he keeps in shape, which isn't so good. But still I'd be shocked, if I were Carlos, to think that the heart thing and not such great shape thing came into consideration from Cubs management.

And then there's this spring.
Did you not see that last performance he made?
Just.. why would anybody even think about those first couple starts?
Back when the ERA was about a thousand.
It's all the way down to 10.9 now.
And that silly little argument with Aramis Ramirez - you can tell they're buddies now, can't you?

Seriously, I would be shocked and lashing out at Cubs management too.

Yeah, it's possible that new Cubs pitching coach Mark Riggins was trying to let Carlos down slowly - I mean there's the heart thing to consider and all - but if I were Carlos I'd rip Riggins a new one for not just saying up front that he thought I sucked.

If I were Carlos.

Anyway, in a related story, the Cubs actually blindsided me by keeping Andrew Cashner as the 5th starter and giving Marcus Mateo the last spot in the bullpen.

This is something I'd call progress for the Cubs.
Absolute kudos to management for realizing Carlos Silva's actual value vs. what he costs.
It's not easy to eat that kinda cash.

And... it won't be all smooth sailing for young Andrew Cashner.
We should all right now take a vow of patience with him.
Especially if you go to Wrigley.
Do not boo this kid for he represents a bright decision today, and maybe even a brighter future.