Cubs Cactus opener: Spring is in the chair. 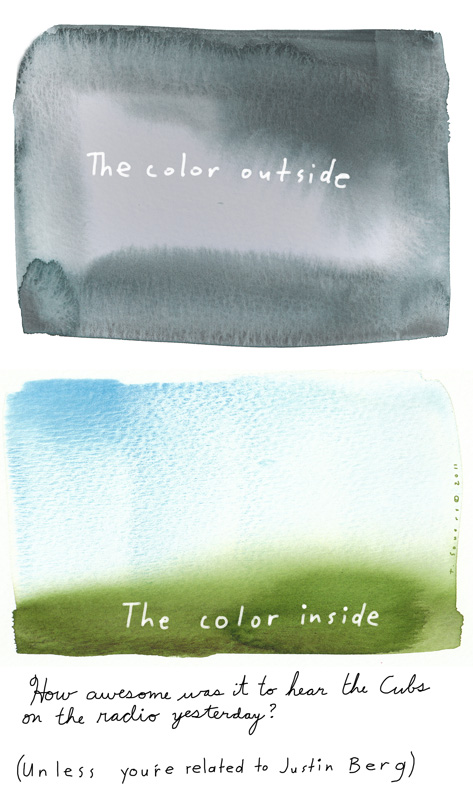 I gotta tell ya, I didn't really care about the result at all.
But hearing Pat Hughes and Keith Moreland on my little Cubs transistor yesterday?

Cared alot about that.

"Chicago Cubs baseball is on the air!"

Gimme a cold one and allow me to put my feet on the furniture, please, I've been waiting for this.

So Big Z was awesome, and after inning #1 weren't you a little joyfully flabbergasted?
Of course, it didn't take long for things to even out.

Garza got a hit, but I'm sure would have rather had a better time on the mound.
Coco Crisp (really?) hit one 420 feet off him, For a grand slam.

Colvin makes a couple sloppy errors.
I was pretty shocked, but I just now read they're gonna try him out at 1st later this week.
Spring's the time to try this stuff.
I'd rather they didn't mess with this kid, but it sounds like they have no backup for 1st base besides Baker.

Ahhh, but it's only day one.
Nothin' went into any record book.
Lets just see what the guys can do and not worry about any final scores.

And it was a fabulous Sunday with melting snow outside and the radio on inside.
Spring was in my chair.

Mike Quade knows what will happen in the future!

A couple strokes here, a couple strokes there, and Mike Quade's fortune-telling pencil will let Cub players know their future for up to a couple days in advance. (note, I just listened to the pre-game show, and it's 3 games in advance.)
Just a little more magic from a guy who might prove to truly be a player's manager.
I mean - maybe other guys did this, but I can't remember reading about it.
You put the lineup for not just today's game, but for the next couple, then players can plan ahead and do other stuff that players need to do in the Spring to compete at their best.

Reed Johnson loves it.
He said this in a Bruce story on ESPN:
“I like to prepare myself mentally before a game,” Johnson said. “I’m a big fan of that. And if you know you’re not playing, you can get a lift in or do some hitting and running to help condition yourself.”

Sounds pretty smart to me.
Sounds like Manager Mike is on his game already too.

Lastly, you can go here and do an online popularity vote for organ music vs. pop songs at Wrigley Field.
The story totally cracks me up, that this is a big deal, but the bottom line is the sound system at Wrigley is still kind of from the old days of the el, when you couldn't hear what stop was coming up.
The organ doesn't depend on sound quality so much, I guess.
Anyway, at the risk of being an old fogey, I voted organ.
It sounds like baseball. 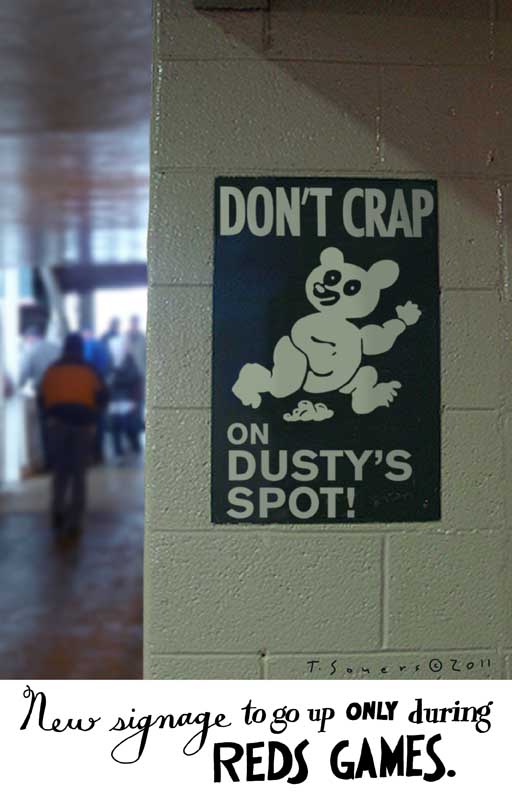 I'm so behind on everything.
I just heard about somebody taking a dump on Dusty Baker's spot sometime during the end of his Cub tenure.

And I thought well, probably a good idea to remind people not to do that again.

Tomorrow, the Cubs are going to play their first game of the Spring against the Oakland Athletics. And it'll be on the radio (here's the WGN Spring broadcast schedule).
1:30 is pre-game, and then on to the game at 2:05.

It'll also be the first time in 21 years that Ron Santo won't be part of the radio broadcast.

So part of the reason I'm for sure tuning in is to acknowledge that on my own, and while of course Ron won't just leave my brain, I'm not going to wallow in his passing all year either.

Because the other reason I'm tuning in is because it's Cubs. Baseball.

Pretty sure you've seen the lineup.

Get used to Fukudome in that leadoff position, but don't freak out about this one lineup for game one of Spring Training and you don't see Tyler Colvin's name in there.

If he's not then Tyler's in there and DeWitt or Baker lead off until Castro does something good to convince Quade that he can be that guy.
Or until Fukudome, DeWitt and Baker do something bad to convince Quade that Castro should be the guy.
Or until Fukudome does something so good he becomes coveted by another team and the Cubs trade him for...
GOOD GOD!
Pitch #1 hasn't left Big Z's glove and I'm getting so far ahead of everything I'll just shut up right now.

But I CAN'T WAIT to turn on the radio tomorrow, and I'm sure you can't wait either.

The Balls of Angel Guzman 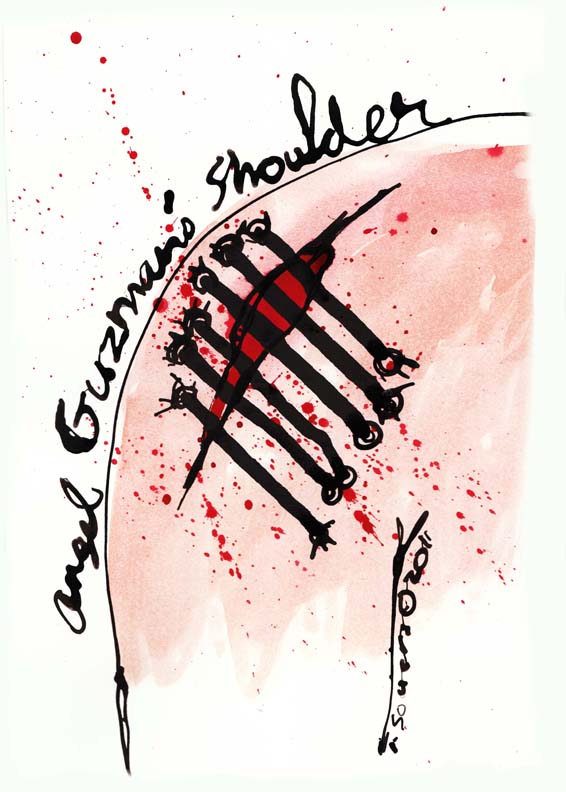 Look at this stuff: 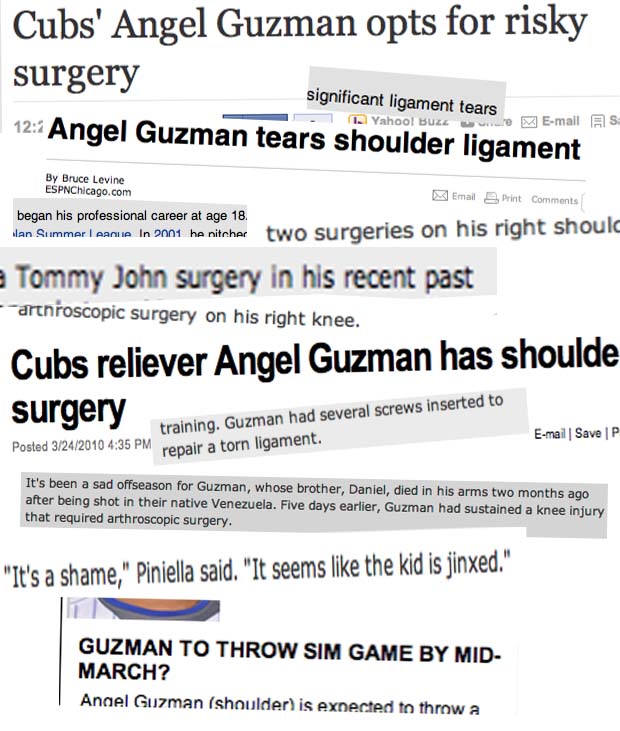 You know, he just wants to throw.
So Angel, don't know when it could happen, but here's hoping you get back out there, bud.

The first Cubby Occurrence of 2011 happens in St. Louis. 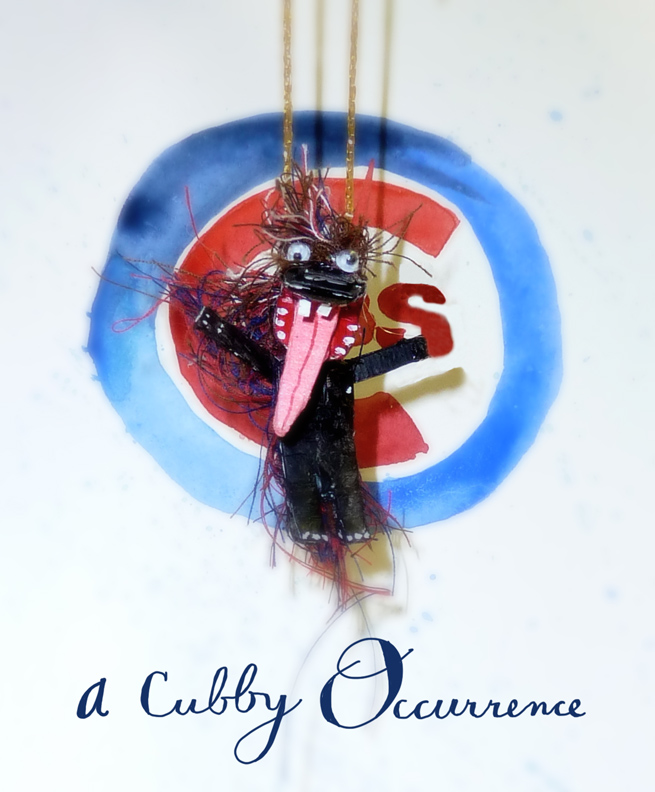 Do not mistake the tone of this post for anything less than serious, because it is.

I mean, yes we're all aware that pitchers and catchers reported, and by now everyone for each team is pretty much in camp, but this season isn't even a blink of an eye old and the Cardinals lose their ace to what sounds like Tommy John surgery.

Adam Wainwright blew out his elbow yesterday, and it looks like it could be a year and a half of recovery if it's as bad as they think.
Plus Albert Pujols and his probable departure.
Plus infielder Nick Punto got a "sports hernia" and is out for a couple months.

That is brutal, and before you say it couldn't happen to a nicer team, watch it or Mr. Karma will swoop down in the form of another Cubby Occurrence and...even things out.

You don't wish that kind of injury on anybody, even a Cardinal.

Wainwright is one of those guys you love to hate because he's just so damned good.

But happen it did, and it's pandemonium in St. Louis (just read Bernie in the Post Dispatch).

What does it mean for the Cubs?
Well, it knocks the wind out of the biggest rival, but doesn't change anything in Milwaukee or Cincinnati. And you can bet Dave Duncan will make something out of somebody we never heard of.
If you read Bernie's take (that link above), he thinks without Wainwright the Cards starting rotation is only 3rd or 4th best in the division.

Anyway, gigantic news for such a young point in the season.

Lastly, awhile back I was trying to paint a Cubby Occurrence.
Like, an invisible force or the Smoke Monster from "Lost" or...I don't know.
What does it look like, out there in the atmosphere, waiting to dive bomb some foul hell on our favorite team?
Then my daughter, she spent some time researching the Krampus (who is sort of the Anti-Santa Claus) and she made a little sculpture.
When I saw it with the big tongue and all those teeth I thought yeah, that's what Cubby Occurrence looks like.

Don't worry.
I'll keep it here in my basement, tied to a tack on my bulletin board so it can't, you know, get us.

Ryan Dempster gets the Home Opener 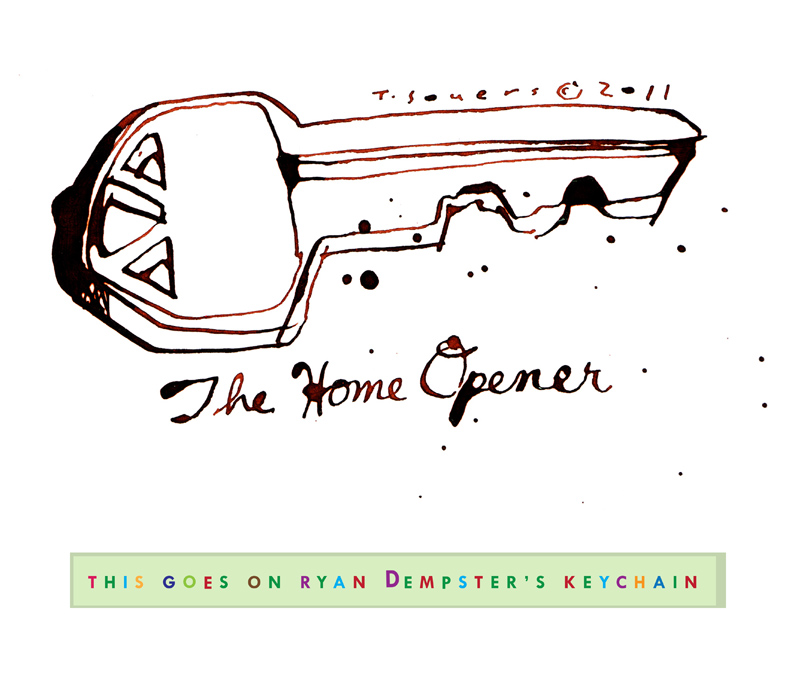 So, fabulous!
Ryan Dempster gets the honor of starting on Opening Day.

As good as I think that decision is for Ryan because nobody deserves it more, it's also really good for Carlos Zambrano.

Takes a little pressure off.

Remember last year's disaster opening in Atlanta, when Carlos went just 1.1 innings, gave up 8 earned runs and started off the year with a 54.00 era?
Not that he can't possibly pull off the same feat in game 2 this year, but there won't be the media pressure and whatever goes on in his own head leading up to the opener.
The home opener also happens to fall on April Fool's Day, so... yeah that's some overthink on my part but for Carlos, it's better that there's no chance whatsoever of falling victim to the headlines that a bad start on that day would generate.

Even tho it's still miles away, this season has started, and because I'm a team guy I'm over the "Carlos must go" thing.
His pronouncement that he's "cured" is, you know, he's said that every year one way or another so whatever.
And when something bad happens with him I won't be shocked, and obviously neither will Mike Quade, who said something like if Carlos goes nutty he can "take a walk". And the context didn't mean he'd be kicked off the team, it meant Carlos can do what you or I would do when we get mad and literally take a walk to calm down.

That's a better way to word it than saying we'll call the guys in white coats again.

Anyway, getting back to Ryan Dempster - I'm very happy he's getting this symbolic payback for years of dependable excellence, and I SO hope he gets to be the one pulling the April Fool's joke of his own making that would include something fun he plays on say, Reed Johnson.