A purple Wrigley sign for Northwestern? What color is next? 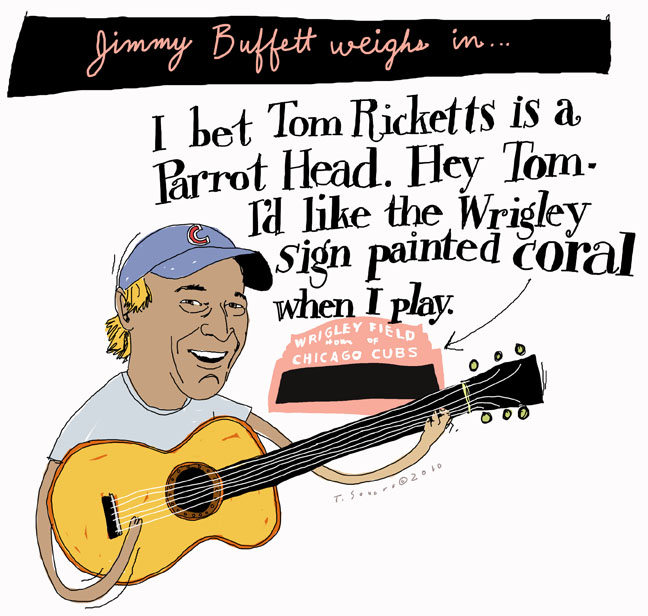 There are a billion throwaway, stupid, time-wasting stories about "baseball" in the off-season, and certainly this is one.

But isn't this one weird?

Well, is it all in good fun?
Absolutely.

Is it working as a promotion?
Hell, I'm writing about it. Certainly once the game is televised Wrigley Field will be prominently displayed on Sports Center, maybe as a lead-in to a story about how the Cubs First Family is trying to finance the Wrigley Wrenovation (so if you're Tom Ricketts, you're right now trying desperately to convert that story from it's current gobbley-gook into language that's easy to understand and clearly beneficial to the Cubs, Chicago, MLB, and the country).

PInk is used to great benefit, importantly helping make us all aware of breast cancer.

You can buy any color Cub hat you want, we spent all summer with a giant noodle, a whole river is dyed green to celebrate St. Patrick's Day here, I guess this purple sign is to be expected. Even normal.

I'm sure Northwestern fans are excited, even proud.

But as a Cub Fan, I kinda feel like I got mustard all over my "Left Field Sucks" t-shirt.

I thought the Bears were going to get creamed by Minnesota.
I thought there would be more Cutler sacks in this game than any all season.
And I thought Brett Favre was going to have a field day, as they say.
So much so, that I thought the headline for today's post would be: "Brett Favre sends lewd photo to Lovie Smith!"

And I even did this illustration before the game: 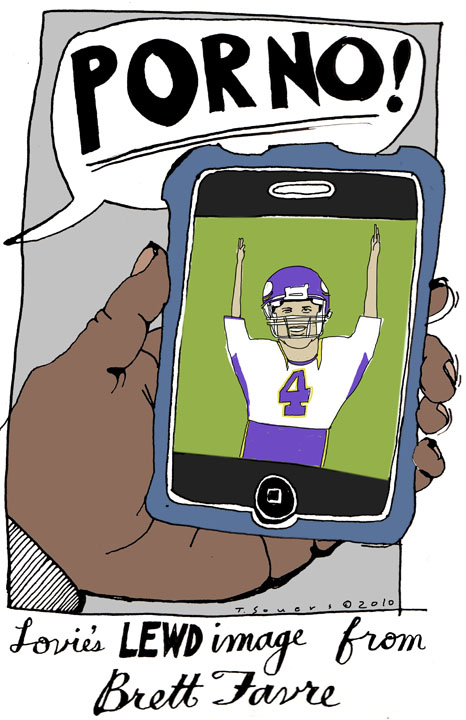 Well happily, the joke is on me.

My brother came to town, hadn't seen him in months, he got tix online so we went.

Poor guy had been away from Chicago for so long that he begged me to take him to the Billygoat before the game, where he breakfasted on a doubluhchesss and an Old Style.

It's seriously hard to beat Soldier Field when the Bears so thoroughly thrash a team as well-liked and popular around Chicago as the Minnesota Vikings.

God, was that fun.

It appeared (I haven't looked at any stats or anything) as though the Bears beat them in every facet of the game, that Brett Favre just looked b e a t, that Devin Hester returning all kicks is (shocking!) brilliant, that the line did well, that Cutler has balls, and the D is semi-suffocating.

What you see on TV when the Bears score is... a commercial.

If you're at Soldier Field, what you see is... AWESOME old footage of Butkus and Ditka and Sayers, etc. on the big screen behind the printed lyrics to "Bear Down Chicago Bears" as everyone sings along.
Not alot of songs I sing out loud, but man that's too much fun.

Just a great day, and for awhile I shall refrain from my usual Lovie and Jerry bashing. 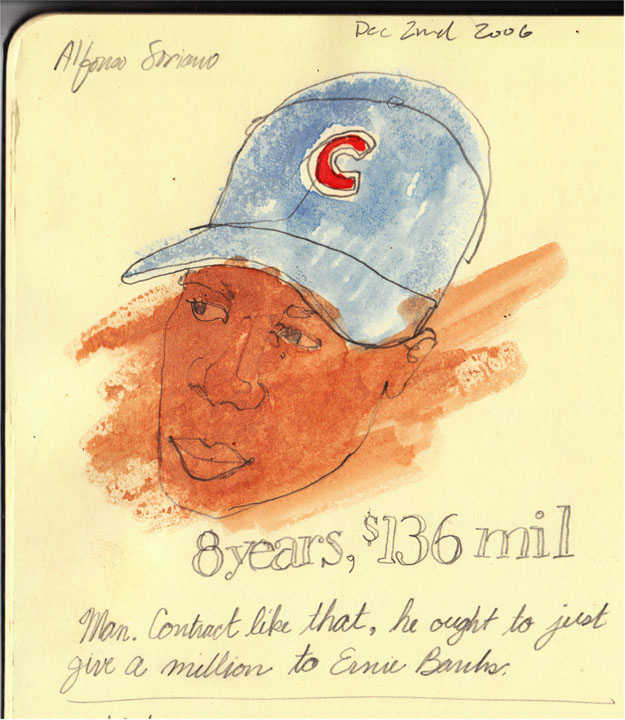 I've got sketchbooks all over the freaking place.
I just found this one on a shelf.

This little sketch, as you can see, is from December 2nd, 2006.
(I probably outlined it and used it in an earlier post sometime, without the "He ought to just give a million to Ernie Banks" part.)
The page before it has this:
"...a news guy said that tomorrow the Cubs will sign Alfonso Soriano. Well, it happened.
Line-up: Soriano, D. Lee, Aramis, the new guy, Izturis, Murton, Barrett, Jones and some kind of trade for Julio Lugo and/or Cliff Floyd.
Remember in 2003, we were gonna win with pitching.
Now we're getting some bombers in here."

It was dated November 21st, 2006.
I was SO EXCITED!
Alfonso Soriano was part of it, but the real excitement was simply this: the Cubs were spending money like the Yankees.
Didn't you feel different?
Like you never had to take the bus again?
Like the maitre d would know your name and sit you at the table with Mr. Gates and Oprah?

Anyway, I get the whole guaranteed contract in baseball, I get how the owners screwed the players for so long, I get why there's a union, I get all that.

But sometime soon, somebody's gonna have some kind of epiphany and figure out a better way to do baseball business, because this one's busted.
You know, a new clause, a different angle, a ray of light, something.

Ahh, who am I kidding?
There's a sucker born every minute, as they say, and they have titles like "General Manager" and "Fan".

On that positive note, I know the Holidays are coming up.
There's a new link in the column on the right that says, "Cubby Blue Stuff".
I can't put stuff on there that's blatantly copyrighted, but there are some gifts that might be good for a stocking stuffer or whatever.
Click underneath where it says, "Click here if you wanna get some Cubby Blue stuff."

This hasn't been good.
The Chicago Blackhawks look like they're still hung over from the Stanley Cup Global Party Tour, which... well, doesn't it seem like only about 5 minutes ago you were hearing that the Cup was at a bar down the street from wherever you were?
Didn't I just post a video of Patrick Kane swilling champagne out of the bottle in a giant parade down Michigan Avenue?

How can anything bad be happening already?

Not really sure, but I guess it is.

The Hawks have played 18 games and lost 10 of them, one in overtime.
That's not how Stanley Cup Championship teams are supposed to start out the season.

Listen to your logo, Hawks.

No more Joe Morgan stories about himself during Sunday Night Baseball!

I found out about it in the middle of that "suspicious package on the Blue Line" thing that had the cops shut down the el and the entrance to the Kennedy, which made me have to circle around to where I started and then take Milwuakee from North to Irving.

For those of you who don't live around these parts, that's... not a far distance at all.

An hour and a half.

Of the worst kind of crappy crawly traffic IN THE HISTORY OF THE WORLD!

About an hour into it, I heard the Joe Morgan news on the radio.

And I paused and then said, "Seriously. Yay."

Lastly, here's the headline online for the Trib: 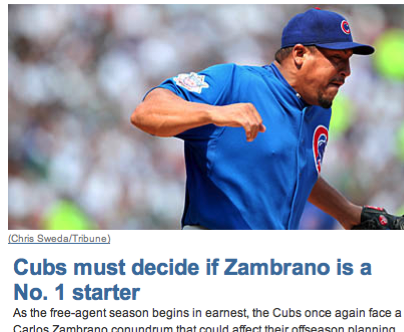 How many things are wrong with that headline?
I'm afraid to read the article.
Can I...please have a month off of Carlos freaking Zambrano?

Bears beat the Bills! Now they're going ALL THE WAY! 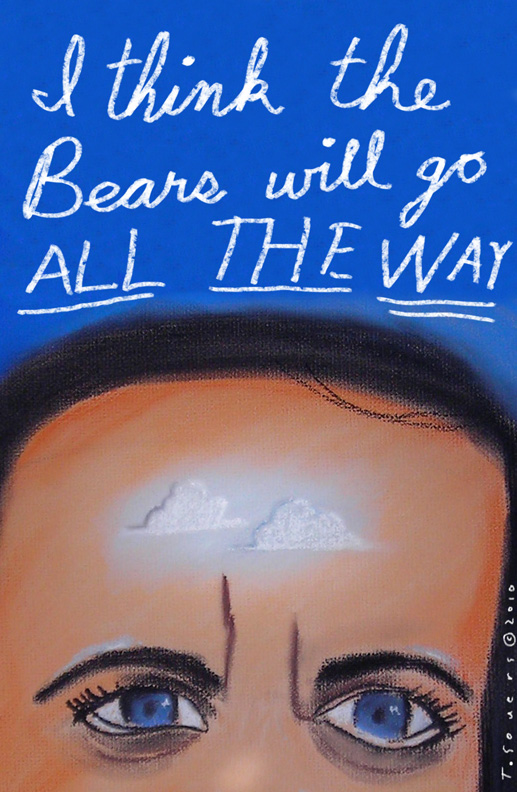 Of course you'd have to be an airhead to think that.

When I saw Sunday morning's Trib and David Haugh said he thought this could be the tipping point for Lovie and Jerry, I couldn't help it: I wanted them to lose.

Lovie and Jerry can say I'm a "bad fan" but they'd be wrong. I live here. I bet I've seen more Bears teams than they have, and I have a pretty good sense of when something's gone bad.

But the Bears prevailed yesterday. They beat a winless Bills team by 3. And now we'll read that they'll stay in contention for 1st place in the Central and yada yada yada.

I wish I could believe it.

Anyway, sorry to be such a drag about the Bears.

We went to dinner by accident on Saturday night, and while waiting for The Table That Never Came saw the Hawks thrilling shoot-out win over Atlanta - a team that almost is the Hawks with Eager, Ladd and Byfuglien. The guy who won it for the Hawks was named... uhh, can't remember.

I gotta watch more I guess.

Lastly, what do we think of Adam Dunn?