Should the Cubs become the "Quade Squad"? 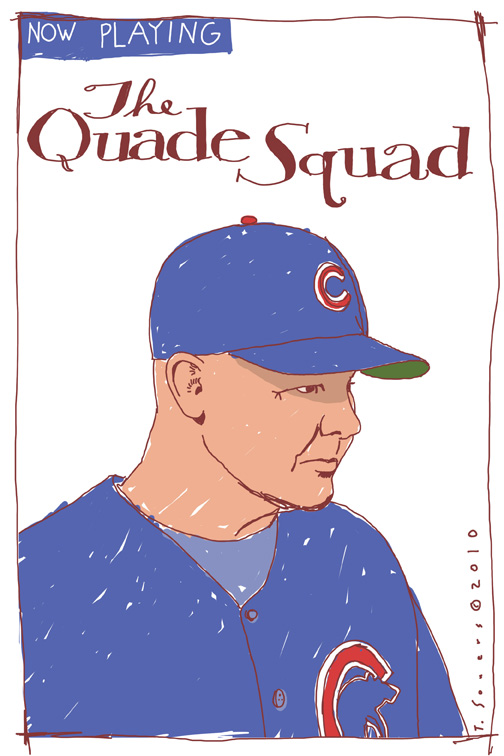 I got that thing that's going around and I'm staying in bed today.

This illustration is in the newest issue of VINE LINE, done a couple days after he took over.

And it reminds me that including today there are only 4 days left to enter the "Guess The New Cub Manager and his Press Conference Quote" contest.

Ryno's in the lead with 6 guesses, Girardi with 3, and Quade, Torre, and Brenly with one apiece.

Right now, if Quade gets the nod then Bud wins with no competition, and that would be BORING (not your entry, Bud, the competition would be boring because I want to compare the quotes, dammit!).

So right now, guess a manager and what he'll say at his introductory press conference and put it in comments or email me AND YOU MIGHT WIN AN ORIGINAL PAINTING!

Okay, so I said I'd do a valentine to Lovie and write a love song to Jerry Angelo if the Bears beat the Packers.

My jaw is still dropped like a hockey puck.

Just a fabulous game - so many big plays they sort of blurred together. It helped a ton that the Packers just flipped out and got called for penalty after penalty - none of them really controversial but rather, they just committed them.

There's definitely something there.

Also: Detroit MUST be better than anybody thinks, if the Bears came THIS close to losing to them. 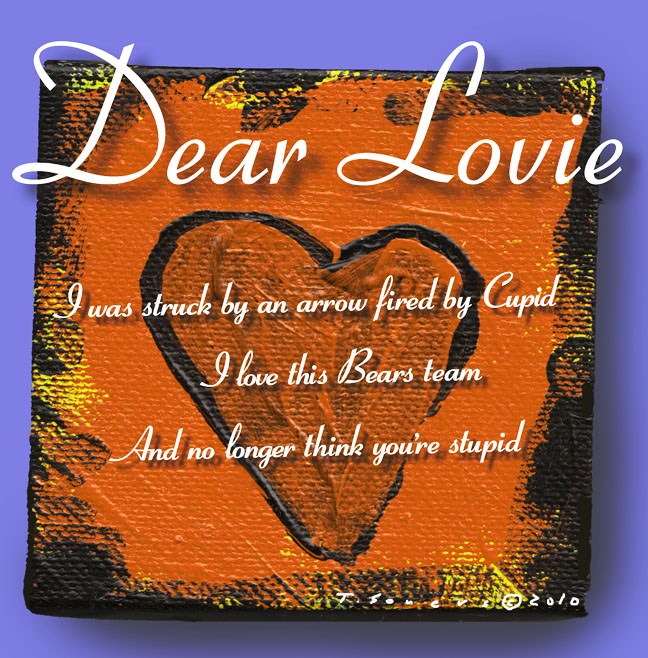 And to Jerry Angelo, this song based on "Bear Down, Chicago Bears": 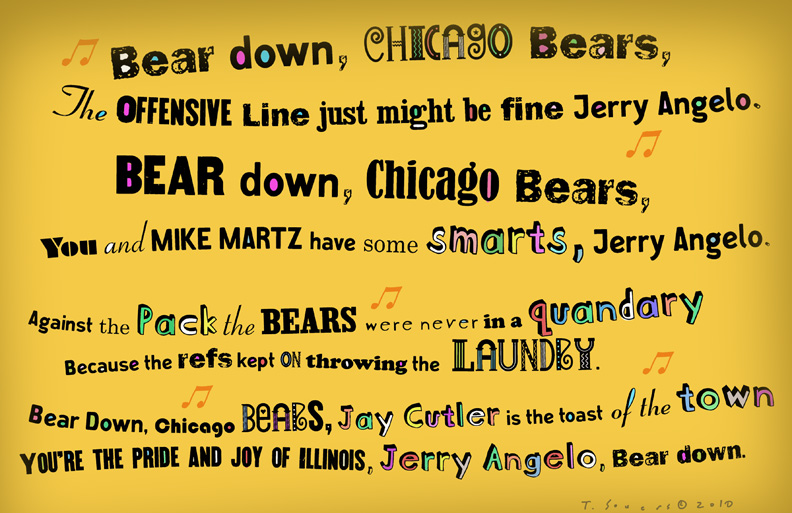 Never try to beat "You're the pride and joy of Illinois."
It is perhaps the greatest line ever written.

Meanwhile in San Diego...
The Cubs have twice beaten the once runaway 1st place Padres and knocked them to two games behind the San Francisco Giants. First Carlos Zambrano got his 10th win, shutting them out 1 - zip on Monday, and last night Ryan Dempster got his 15th W, 5-2, with a couple dingers from Alfonso Soriano.

Tonight will be Randy Wells starting in the Cubs 5th to last game of 2010. 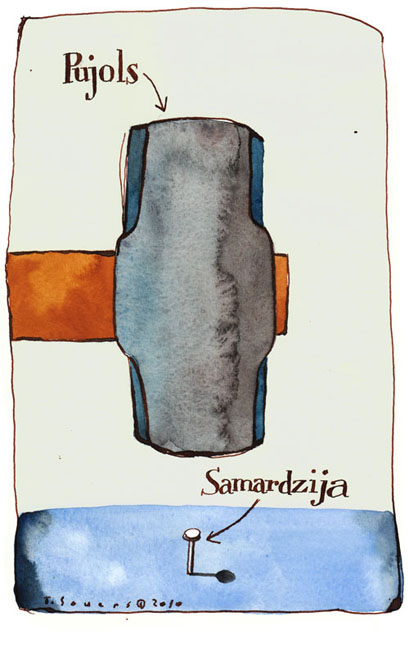 Well, that sure wasn't any good there, young Jeff Samardzija.

Before the first out was recorded in the last game of 2010 at Wrigley Field, the Cardinals had exposed Jeff Sam as a minor league pitcher in every way possible: 3 walks, a wild pitch, a stolen base, a single, and the 3-run homer that Albert Pujols hit made such a noise I believe my surround sound has a crack in it somewhere.

Then finally, somebody made an out, and at the end of the top of the first it was Cards 4 Cubs nothin'.

Then in the middle of the 5th, the Cards had added 4 more.

The Cubs though, they didn't quit.

I would imagine you all have had your hopes dashed enough this season to not have gotten TOO excited as this one progressed.
The Cubs got 2 in the 5th, 3 in the 6th, and 2 more in the 7th and well... wouldn't it be awesome if... but that's how it ended: Cards 8 Cubs 7.

Now they're on the road for a 4 gamer in San Diego, and the end of the season happens in Houston.

It would be great if he did something spectacular and got to ride off in the Winter Sunset with something positive to build on rather than having yesterday's train-wreck burned into our collective retinas.

You all know I can't stand Lovie Smith or Jerry Angelo.
Lovie should be an assistant somewhere, and Jerry should just be a fugitive afraid to show his face anywhere in our city.

But if the Bears beat the Packers tonight, I will paint a valentine to Lovie and write a love song to Angelo.

There I was, up in our seats for my last game.

The wind had picked up and it was kinda cold, and it was right about when all the Cardinal fans around me started with the, "Lets go Cardinals, lets go cardinals..." that I got the text from Olson.

"There's a bunch of empty seats down here, wanna come down?" 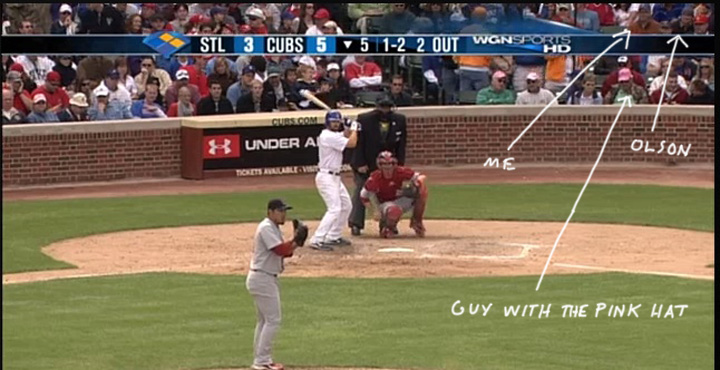 I got this shot off of Cubs.com.

Tony LaRussa had just been ejected, and right after I sat down Card pitcher Blake Hawksworth caught the Sam Fuld line drive to the mouth.

So, that was pretty scary.

But just as a set of words to say out loud, this is pretty hilarious: CASEY COLEMAN OUT-DUELS CHRIS CARPTENTER!

Little Sam Fuld went 2 for 4, scoring once and driving in 2.

Olson & co., thanks for the invite down.

I've said this before, once you get down in the Incredible Section (pretty much anywhere in the first 20 rows), you can be a Pro Sports Photographer.

This is my fav shot from yesterday: 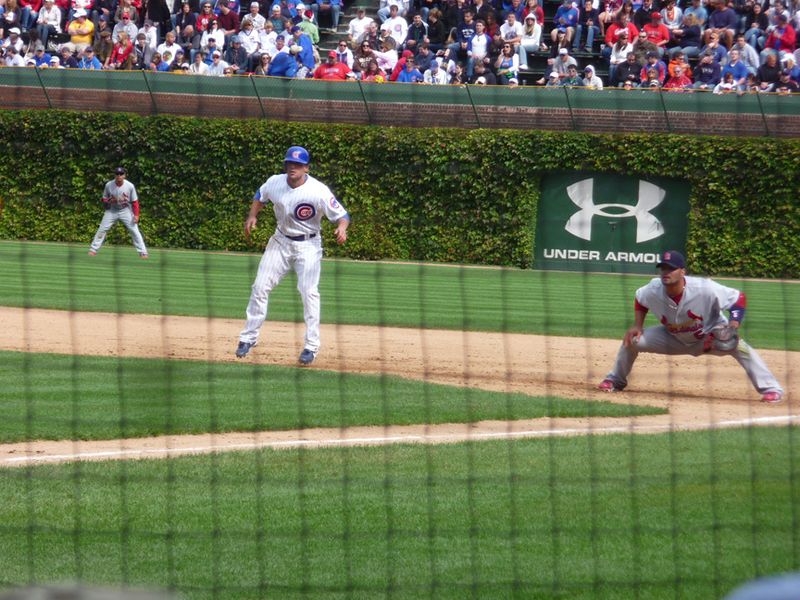 Yes, Sam Fuld was the bigger player.
Yesterday at least.

Gammons talks about Joe Girardi coming to the Cubs. 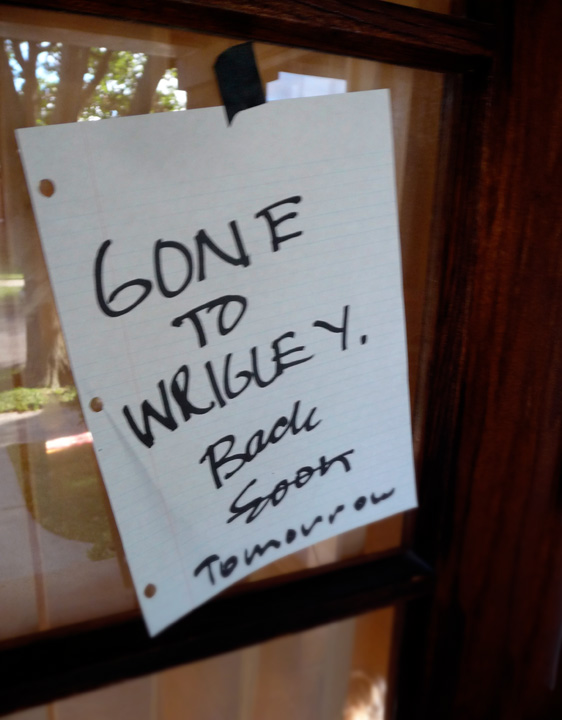 Probably I'm the last guy to write about this, but if you get a chance go listen to Mully and Hanley talk to Peter Gammons about Joe Girardi managing the Cubs. It's about 8 minutes into the interview (you can use that orange slider bar to skip ahead if you want).
Peter Gammons isn't just some dude talkin' rumors.
He hints that there's "something going on in New York".
He feels there's a distinct possibility the Yankees will get knocked out of the playoffs (by the Twins), which will be Jim Hendry's opportunity of course.
And at the end he says, "If it comes down to money, the Cubs will beat the Yankees on paying the manager."

And as of right now, NOBODY'S PICKED JOE IN THE PAINTING CONTEST (see below).

It's my last visit to Wrigley til next April, which will seem like about 4 or 5 years from now especially if the Bears lose to the Packers badly.

Looks a tad chilly out, but it's sunny at least.

I'll tell you about it tomorrow.

Welcome to the Cubs' world, Cardinals

Maybe you've read some of the articles coming out of St. Louis recently.

Articles about being embarrassed by the team, stuff like that. It's like reading the Tribune, or Cubby Blue, about a month ago.

The Cardinals fell from more glorious heights than the Cubs this year, but make no mistake the Cubs are the worse team. Think about what you'd be saying right now if it wasn't for Mike Quade and the renewed effort from the team and kids.

Nobody here had expectations of greatness in 2010, but Lou's last year was about as disastrous as you can get.

Ahh but hell, it's the last weekend of baseball at Wrigley Field, and it's against the Cardinals. I'm so heading out tomorrow just to get my last taste of baseball summer. I hope to see a ton of rookies on the field from both teams, and to have a little fun as well.

ps: That Cardinal is made from a dog ball, a Trader Joe's cereal box (beak), popsicle sticks, a beer can and some paint.