So far, he's undefeated as a Cub manager.

But lets consider all Mike Quade has to deal with in his little window of opportunity thru the rest of 2010.

You think that ain't a tap dance?

Try breaking in rookies and placating damaged egos and making disinterested players care again while trying to make yourself look smart on the field at the same time.

Then he's got the whole spectre of Ryno The Next Manager, who remains my favorite Cub of all time and I would still like to keep him that way by not having him manage this team, at least not yet.

You've got General Manager Jim Hendry, who I guess still has the firmly flexible backing from the New Ownership. But if you can name any fan who says, "Man, I LOVE Jim Hendry because he's done such an awesome job" I'll kiss your ass in front of the Ernie statue with hundreds around on game day.

Which brings us to Tom Ricketts and the College of Owners.
(I kinda feel Tom is getting lambasted a bit too much - it feels like a long time but really, he just got here didn't he?)
So far, they've been mostly silent and have yet to do anything to hint at a personality.
If in fact they are a small herd of deer in the headlights, what will happen when they come out of it? Iron fists? Backtrackers trying to re-coup some cash? We'll see it when it happens, and so will Mike Quade.

He's surrounded by people and situations that are all in flux.

Is there any possible way he can win?

You wouldn't think so, but there he is with the best record in baseball so... who knows.

Cubs beat the Nats last night with a couple homers from Alfonso and Tyler Colvin (just how many will the kid hit, anyway?), and another Dr. Marmol and Mr. Hyde finish.

ps: Just to keep the summer interesting, how awesome would it be if the Sox actually got Manny?

The Chicago Cubs and the Bad Egg Recall of 2010 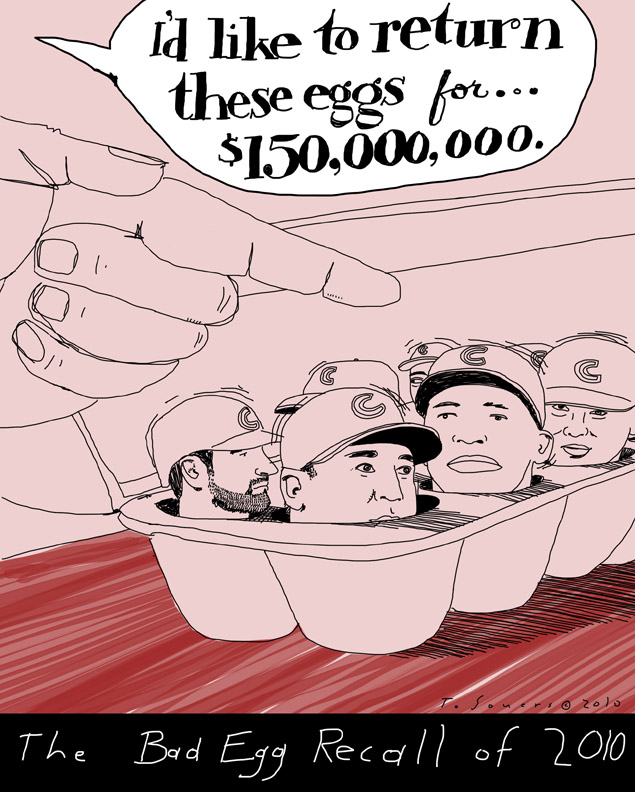 Man, was this an obvious one.

Those are some pretty good guys, wouldn't you agree?

Wouldn't it be nice if they got rid of some of the bad ones?

Carlos Zambrano is pitching tonight, and the hope is he pitches like a genius and doesn't go Travis Bickle on us so that other General Managers forget Old Carlos and give the Cubs a break and take the guy.

I didn't see but understand Alfonso Soriano hit a clutch triple last night instead of striking out, and the hope is he hits a bunch of homers and nobody hits a fly ball out his way so that other General Managers will be fooled into... Ahh God, who am I kidding? Nobody will take this guy with that contract ever.

Fukudome is doing a good job of playing well enough to garner interest.

Xavier Nady is what? A player to be named later?

Anyway, I read this morning that the Cubs beat the Nats 9-1 and new Cub manager Mike Quade is undefeated! Young Casey Coleman had is way with the Nat's bats, and Livan Hernandez got spanked.

I'm glad to read that Quade isn't just going to throw Tyler Colvin into a new 1st base role because of horrible general management and a weak farm system, but rather try him in mop-up duty to get a taste of it.

And that's all I know.

Lou Piniella retires. Some illustrations from over the years.

You know, there's no need to talk about that last (what was it anyway? 57 to 4 or something?) drubbing by the Braves.

But maybe a little about Lou Piniella...

If you saw his last post-game conference, you saw an emotional guy walking away from a game he's been part of for longer than most of us have been alive. Not easy.

Remember when he first came here? The way he put that team together? Just picked Theriot and made him the starting shortstop before the season even started. And a couple months later they were his team, his Cubs.

And everybody loved him. Straight shooter. Winner. The honest to god real thing.

2008 was the dream year - the Cubs were the best team in the National League.

But that season, we all got to feel like big shots. Like we belonged in the same room with the Yankees and the Red Sox.

For that, I will forever be grateful to Lou Piniella.

It went to hell after that, sure, but you and I and everybody who's a fan of this team is different because of this man.

Because losing isn't acceptable any more, and it just didn't used to be like that.

Here are a couple drawings from over the years. 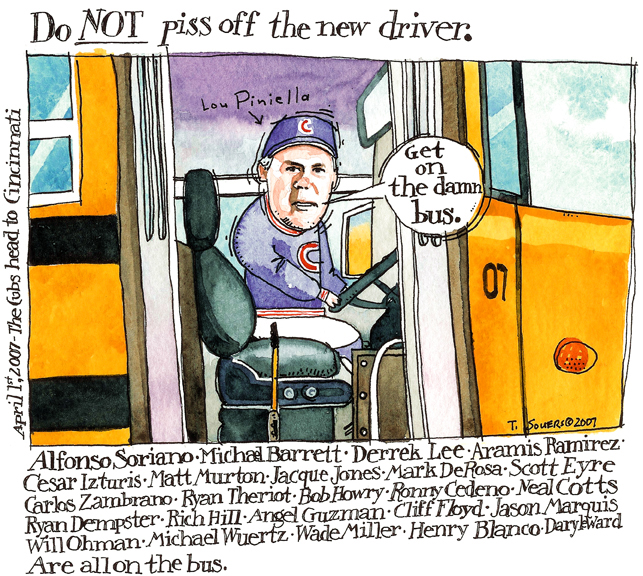 The Rivalry was (and is) as awesome as ever. 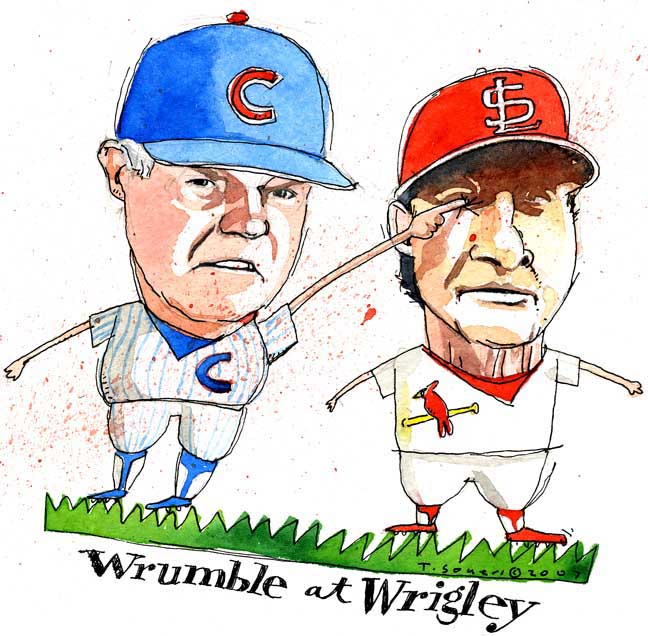 Going to the playoffs in '07. This is my favorite Lou painting. 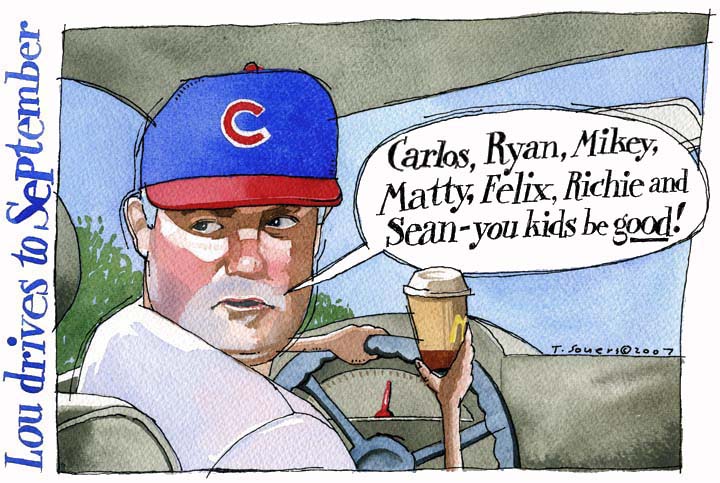 And after the Cubs failed vs. the Diamondbacks, I liked him even more. 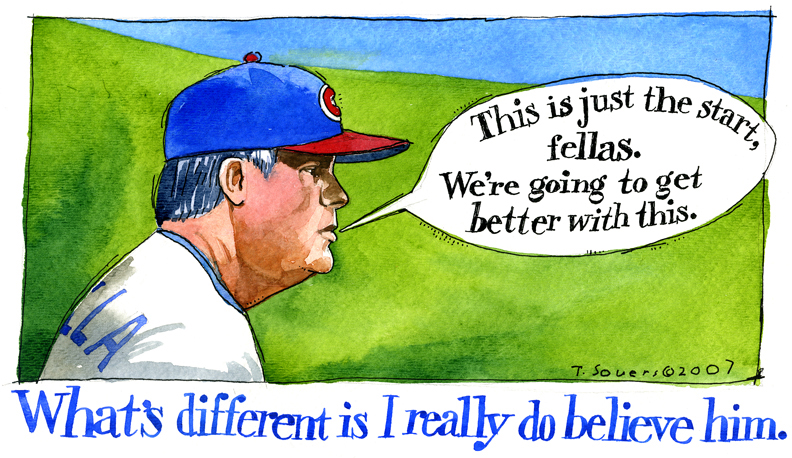 Hilarity in '08, when Lou and Matt Sinatro almost missed a game in Cincinnati. 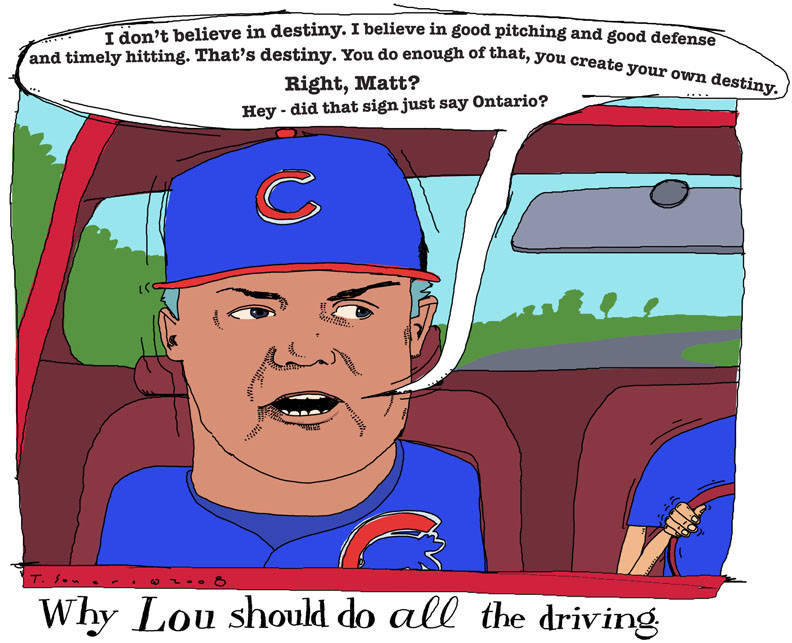 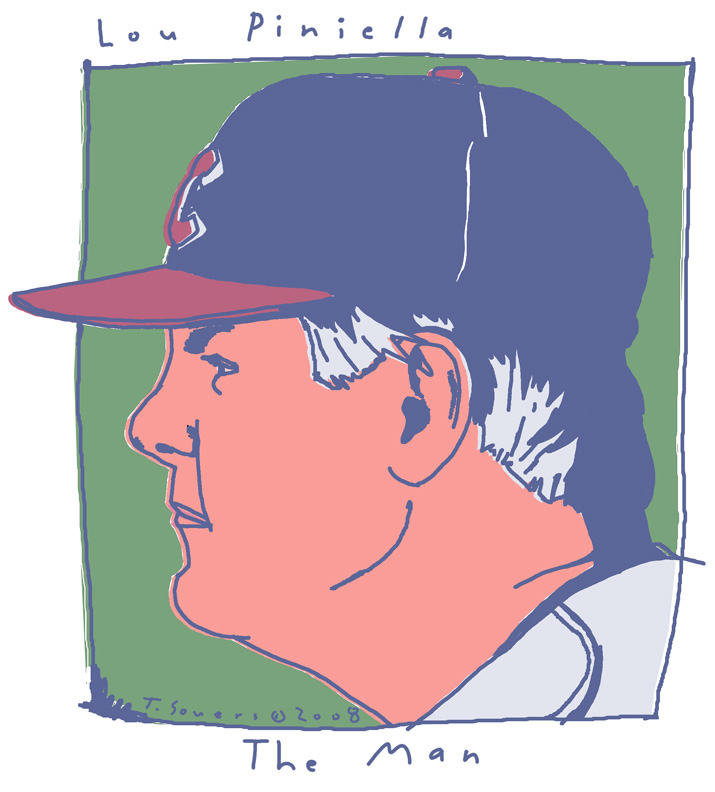 In '09 thru today, guys who were supposed to perform just... didn't. This quote, unfortunately, sort of sums up the end of Lou's career here in Chicago. 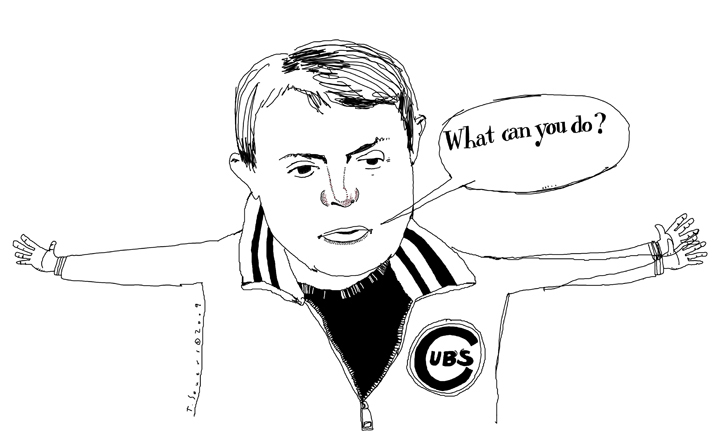 And this last one is the last drawing from '08.
Seems appropriate. 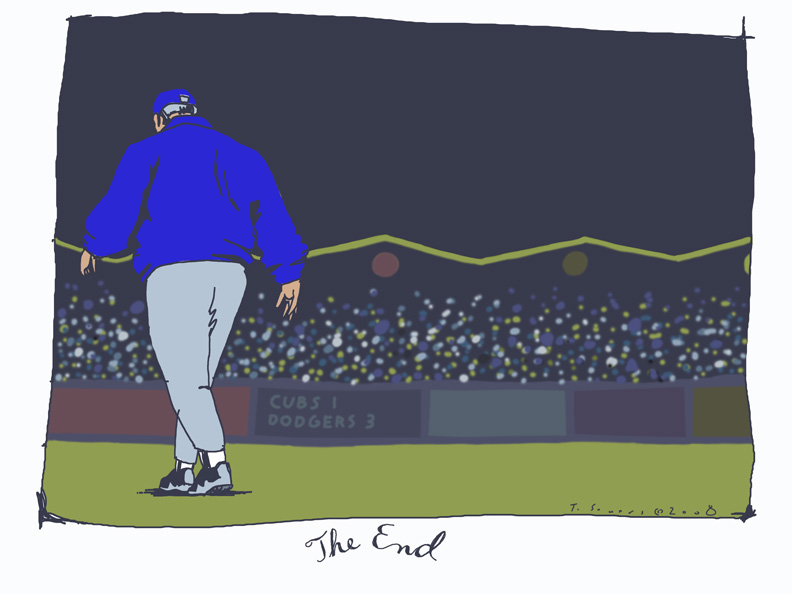 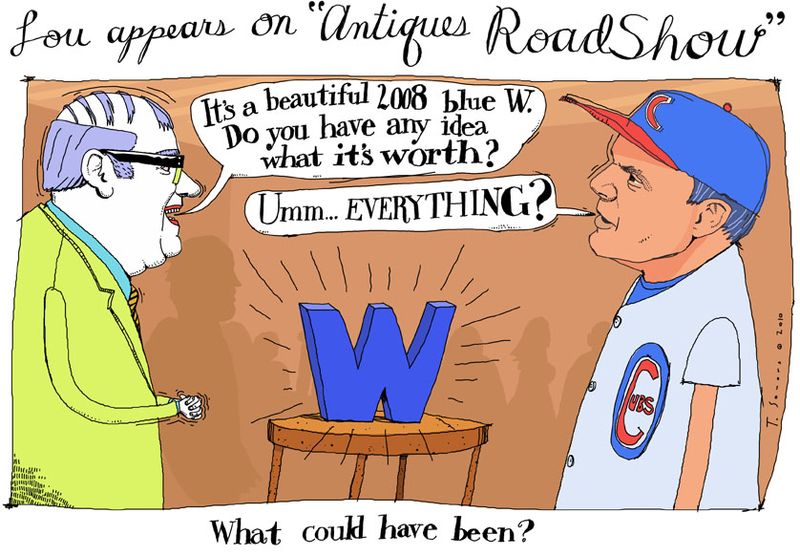 We'll never know, of course, but that was the year.

The hundred-years-from-their-last-World-Series-win year - it was set up like a script written in Baseball God Heaven.

But game one was James Loney with the Grand Slam, and it was a staggering big blow to the jaw.

Game two the Cubs were still wobbling. It was the Game Of Holy Gloves for the Cubs with E's from D Lee, DeRo, Theriot, and Aramis.

Game three they couldn't get up. Sweep.

Sure this is just silly talk and everything's gone to hell now, but that 2008 team was so good and loaded with such good guys. I wonder sometimes what might have happened if they'd just won game 3.

Terrible Ted woulda pitched the next day. Maybe they gain a little confidence, play like they had earlier in the season...

And that's truly a shame.

In a year when we're having to say way more than normal goodbyes, here's another. 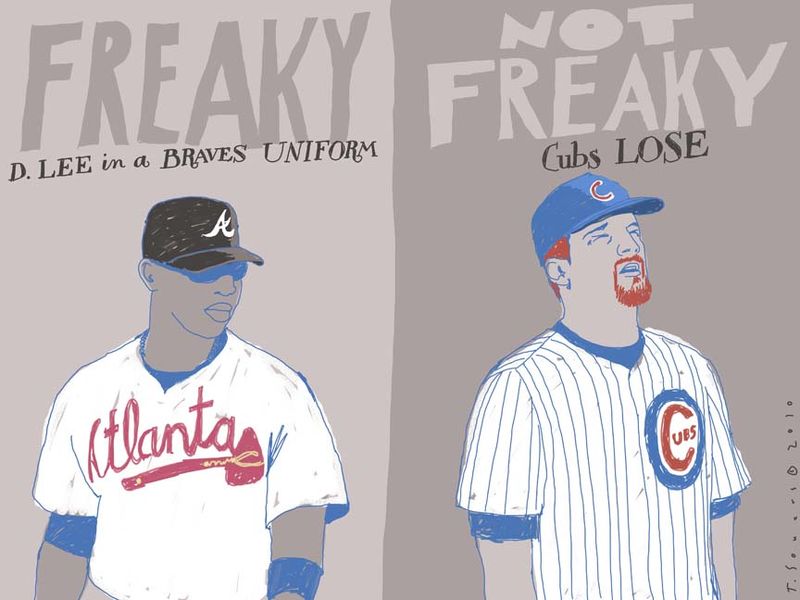 Tyler Colvin has to be a little freaked, moving to first base.

Way back when, it was freaky when Tony LaRussa moved Albert Pujols to first from the outfield, but that was due to an Albert injury.

It isn't freaky that the Cubs would move Tyler due to farm system desperation.

Yesterday, looking at Derrek Lee in his new Braves uniform at Wrigley Field was COMPLETELY freaky.

Koyie Hill knocking in the game's first run was freaky too.

Sort of normal and not freaky when Omar Infante hit a homer to tie it the next inning.

The 6th inning was a mix of freaky.

But the fact that it was clutch and the Cubs took the lead - kinda freaky.

Soriano striking out with Aramis on 2nd was the opposite of freaky.

Then not freaky at all since Nady was up next - had he gotten a hit with guys on 1st and second, THAT would have totally been freaky.

But the end of this game, with the Cubs one strike away from a win? Instead Carlos Marmol's pitch screaming down the right field line for a bases-clearing Rick Ankiel triple and Cubs victory turned into disaster?

Not freaky - I didn't even bat an eye.

I know - doesn't it seem like we were all worried about what Wrigley World Series tickets were gonna scalp for just about 27 trades ago?

Ryan Dempster, who had been on a roll, said the kind of non-freaky stuff you'd expect. "We've been going through a tough stretch...you find ways to lose (games) instead of winning them."

That I feel terrible for Demp isn't freaky at all.

Nobody singing "Go Cubs Go" at the end of a game at Wrigley Field has become the freaking norm, although I wish they'd stop that even when they win.

Ahhhh, but I'm just talking about one game here.

You know what really freaks me out?

(Donna - thanks for the comment leading to today's theme)

Ted Lilly and Reed Johnson kick ass for the Dodgers. 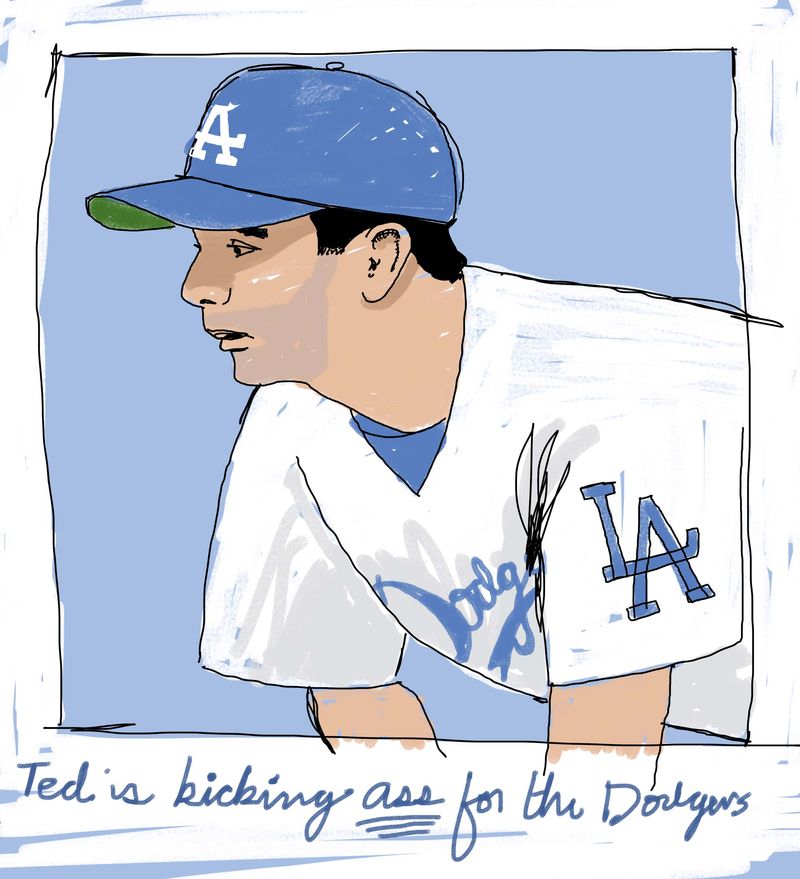 Last night Terrible Ted Lilly threw a 2-hit, 11 strike-out, complete game shut out over the Colorado Rockies while Reed Johnson smacked the 2-run dinger which turned out to be all the runs Ted needed. And by the way, Ryan Theriot goes 2 for 4 with a double.

You know what happened to my blog this year?

It got more profane.

Sorry for that, but it can't be helped.

I woke up this morning with a text from Sutter on my i-phone that read: "Enroute to airport just listened to Ted finish 2 hit shutout with 11 k's. Only runs of game were on homer by Speedy Reedy. Fuck Jim Hendry."

And that, ladies and gentlemen, pretty much wraps it up.