Presenting the 2010 "I Hate The Astros" page Before we get to the Astros, how's about puttin' our hands together for taking 3 of 4 from the Philadelpha Phillies!

6 hits from the kids up top (Colvin with 3 leading off and Castro 3 hitting #2) along with their 3 runs.

D. Lee, Alfonso Soriano, and Geo Soto with 3 RBIs apiece! If not for the hiccup in the 9th yesterday, the Cubs would have swept last year's NL champs 4 to nothin'!

So the Cubs are, on a scale of cold to hot, probably about oatmeal. But that's a WHOLE lot hotter than we could have imagined during the last half.

With an ASTOUNDING eleven runs including 6 off Roy Halladay, the Phils could manage only 6 off Tom Gorzelanny and co.

And now, I am so happy to announce that the Houston Astros will be playing at Wrigley Field this evening.

In this season of I-just-can't-seem-to-get-happy, NOTHING would make me happier than seeing the Cubs get up to Higher Heat during the next couple nights.

Please read the words above out loud and pause at the end of each line (it rhymes, I swear), and should you leave a comment, begin with our traditional I HATE THE ASTROS...

So if you were watching Game Day on MLB.com, you probably saw this.

Because I copied it right off the site.

And I am not kidding.

I couldn't believe it either.

Terrible Ted was a strike-out GOD with 10 of 'em over 7 innings. He also walked with the bases loaded. If he didn't have over 100 pitches in the bottom of the 7th, I'm sure Lou woulda left him in to hit instead of bringing in Kosuke who struck out with Castro on 3rd... but anyway... what an AWESOME VICTORY!

And why do we love Ted so much?

How's about this quote (from here) when somebody asked him about the possibility of a trade:

"I'm not the guy with any answers," Lilly said while munching on a sandwich. "I'm the guy who needs to induce a ground ball to shortstop with a man on first. ... Then you can turn two, and then we can hear 'Go, Cubs, Go.'"

Dude is all biz.

Meanwhile, Aramis Ramirez is too hot to even get near. Another bomb, this one the winning run in the bottom of the 8th. He's got 5 over his last 8 games.

And so Ted gets lifted for Sean Marshall, who gets his 6th win pitching the 8th.

And then Marmol with the save.

He strikes out Jason Werth, Ryan Howard and Ben Fransisco on 14 pitches.

I am traveling and won't be back on for a couple days...GO CUBS!

The Cubs a year ago

Hi Guys. So it's SUPER BUSY and I don't have a new illustration for today.

But it was an awesome game last night if you got to watch (I didn't), and had I done an illustration it would have been something about Starlin Castro stealing home. Because stealing home is AWESOME even if actually it was kind of a busted suicide squeeze by Ryan Dempster.

The easy illustration would be about Bob Howry: the PERFECT guy to put in if you're a Phillie fan. Nothin' but bad heat over the meat of the plate. Seriously, how could you put him in and expect anything less than 4 runs in .2 of an inning against those bats?

But I digress - last night was a fabulous way to start half number two.

Ramirez indeed seems to be awakening from the dead, in fact most of the bats were wide awake.

Here's a thing about Ryno.

He's my favorite Cub of all time. I'd like to keep him that way, so I hope this doesn't happen. At least for now.

Next: here's an interesting Facebook thing regarding Joe Girardi.

I find this idea incredible, Joe Girardi coming to Chicago. But Joe LOVES this city, his contract is up in NY, he's got 4 WS rings, and he's just the guy to be up for this seemingly impossible task. Yeah, the Ryno thing would be fairy-tale stuff, but the Joe thing would too. Plus, he's seriously got the greatest baseball face you'll ever see.

Finally, there's the guy I thought was the most realistic, Bob Brenly, but of course I can't find any "Bob Brenly for Cubs Manager" stuff anywhere.

Remember what he said last year about Milton Bradley? That's what a manager ought to sound like when there's a problem like Bradley. I have no doubts that he would be happier saying this kind of stuff to someone's face behind closed doors. I would SO welcome him.

And lastly lastly, here's what we were reading about a year ago: Ted Lilly's 100th Victory. 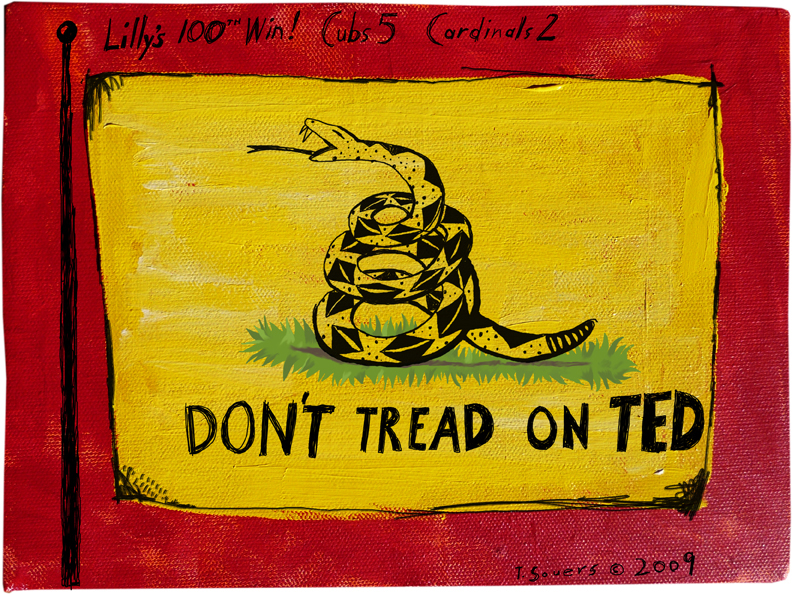 Can you think of a better Cub this year?

What a performance yesterday for his 100th win.

Gotta admit, Marmol made me wig out, but we don't really need to talk about that...

The double play the umps didn't screw up?

Did you see the flip?

Scooping and running past the bag into center?

And whoever that Baker guy is... my god.

I still don't know where he came from and I'm just gonna stay away from Google.

D Lee left with a neck strain, which he's used to I guess and he says it's not that bad.

And that's good because he's been the only offense you believe in.

Anyway, this is what happens when you get some hits, some sparkling D, and tough pitching:

My Ouija conversation with the Dead Aramis Ramirez 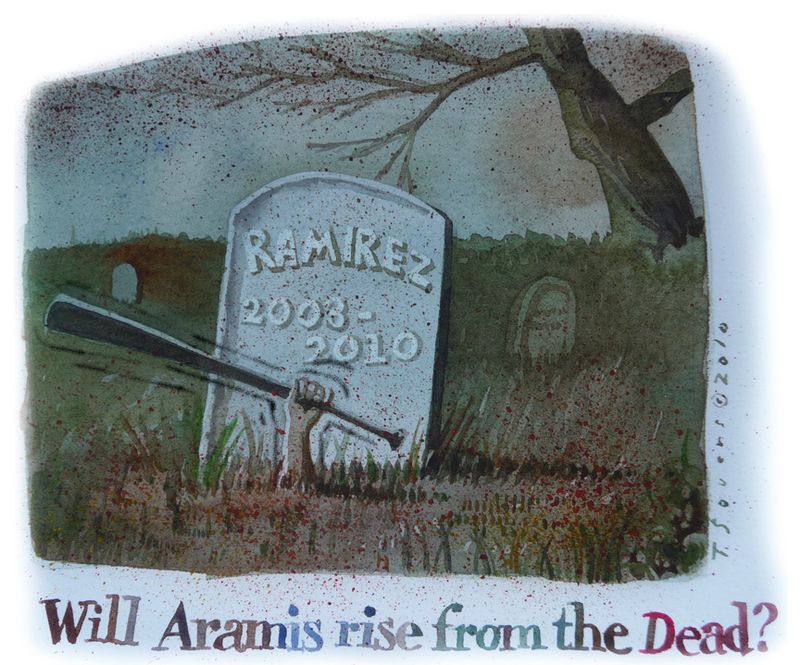 This is kinda creepy I know, but the following conversation happened just last night...

It's midnight, I'm sitting alone in a dark hotel room with my Ouija Board and a candle.

ME: You there, Aramis?

Man, it is SO weird talkin' with a dead guy.

ME: Aramis, how do you feel about being picked as the National League's Least Valuable Player for the first half of 2010?

Okay, pretty scary - the candle flame blew around as if there was a crazy wind in here.

OUIJA: Like the matador who ran from El Toro.

If you've got experience with the Ouija, you know that sentence took about 20 minutes, but... TOTALLY worth it to speak with the dead.

ME: Saw the You Tube clip - it's good to see you haven't lost your sense of humor, even if you're hitting .207.

OUIJA: Did you not notice the week before this All-Star break?

ME: You mean the thrill of sweeping Arizona and the agony of dropping 3 of 4 against L.A.?

The closet door just slammed shut, I am not kidding.

ME: This would go faster if you used acronyms. Like "RBI".

Oh my GOD! A pencil flew across the room and hit me in the forehead.

ME: So sorry, oh Aramis the Dead! The numbers are impressive!

OUIJA: Yes they are. If my thumb stays healed, I will come back to life!

ME: Awesome! So what do you think about Lou Piniella - how's he holding up?

OUIJA: He's standing right here, would you like to speak to him?

OUIJA: What can I say, fellas? Nobody likes to lose. But what can you

And that's when the candle blew out and I lost the Ouija connection.

But pretty cool talking with Aramis.

Lets see if he can really rise from the dead.

Byrd Watching at the All-Star game 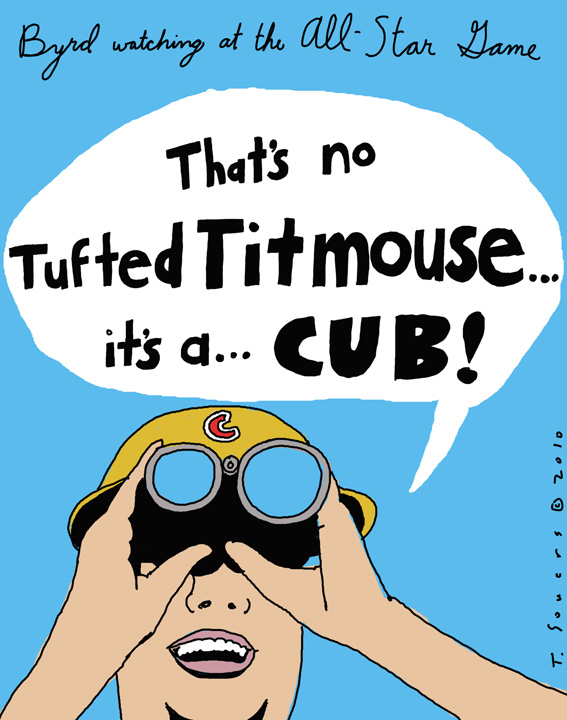 Marlon Byrd - I figured a pinch hitting role late in the game.

Instead, he was a giant stud with the big 2-out walk earned after going in the hole oh and two. Then scoring with that nice little fistypump pose as he slid across.

And then the play in right. Don't forget he came THIS close to catching a sinking liner - an almost trademark play for him - earlier in center.

David Ortiz caught in a black hole between first and second when John Buck's fly went out to right. Would Byrd catch it?

Now Ortiz has to sprint like a... well... like that old guy on a 16-inch softball team in a beer league in Southern Illinois... to second base. But Marlon catches the ball on a bounce turns and fires the one-hopper to nail the speeding...Ortiz!

Seriously, it was an awesome play.

And it was a pretty good game, at least the part I got to see - the pitching was a literal freak show of talent.

So today all of baseball gets to kick back and take a day off and...tomorrow it's back to this awful season.

I'm getting myself mentally ready for any damn thing to happen - trades, Zambrano doing whatever the hell he does, watching Starlin Castro and Tyler Colvin, a dismantling of the team or a 12 game winning streak.

Any damn thing at all. 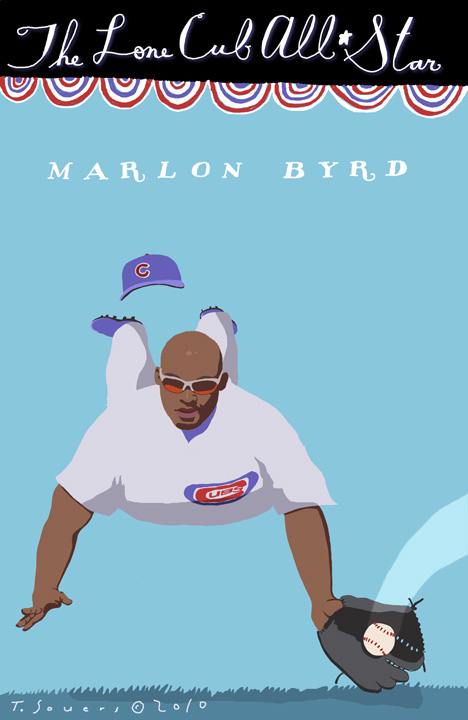 He's hitting .317 which is good for 4th in the NL. He's got 9 homers which ought to get him close to his season high of 20. And 40 RBIs which, considering he's hit kinda anywhere in the line-up, that's pretty damn good. All that with his semi-weird batting style where he doesn't really step into the ball. Just swings with his feet planted.
That power, it's gotta come from his upper body.

He's fast. He's big. Obviously a good clubhouse guy.
And I love the way he comes in and dives on line drives to center.
He doesn't look very pretty - too much muscle - but he's way better than the "average" center fielder I heard about before this season started.

And he's our lone Cub All-Star.

He's not starting. The outfield will begin with our friends from Milwaukee, Ryan Braun and Corey Hart, in left and right, and Andre Ethier from LA in center.

So Marlon's probably gonna get a pinch hitting role, maybe a late inning or two.

I don't know what year it was, but the Cubs sucked and Steve Trachsel was the lone Cub All-Star. Bobby Cox was the All-Star NL manager, and in an interview I remember him speaking in a rather patronizing way about the Cubs, and he called Trachsel "Traxie".

Ah well, maybe Marlon can do something memorable for the National League.

And as my buddy David Oif says, one of the truly awesome sights in baseball happens in the introductions. When a guy gets his name called out as the best at his position in baseball, and he takes the little step forward and tips his cap.