Where have the Cubs' bats gone to anyway?

THAT'S where they went.

Right up yours and mine.

This season is galling, revolting, awful, and worst of all dull.

Yeah, it was Cliff Lee last night, so what did we expect, right?

Otherwise, I turned off the tv in the 4th.

Hey Rest Of Team: how's about pulling this bat out and giving the man some support?

"Late Show With The Chicago Cubs". Not so funny. 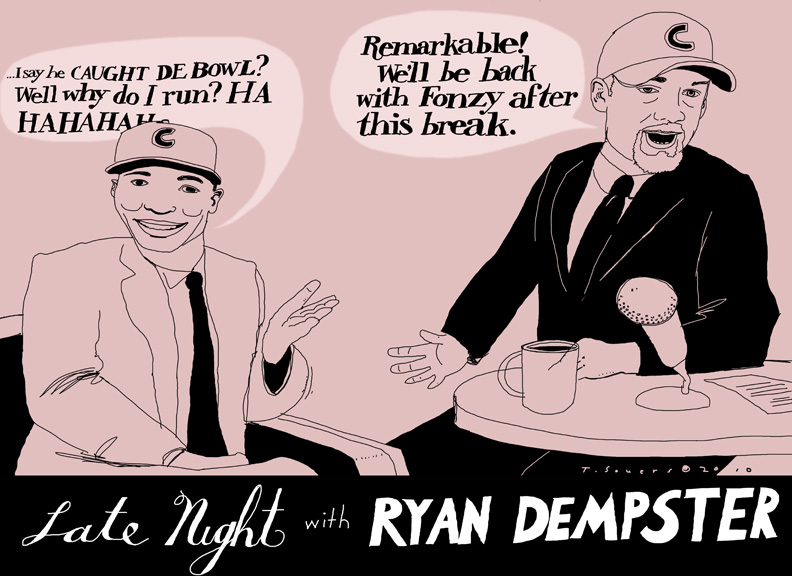 When Tyler Colvin hit the opposite field fly ball to left and Alfonso Soriano just took off from 2nd base without once looking to see where the ball went, well you had to agree with the quote we hear from most of the Cubs most of the time this season. It goes something like this: "we're playing like little leaguers".

Because there was Alfonso standing just past third base looking like a 3rd grader as he watched whoever that Mariner was step on second for the out.

Seattle pitcher Jason Vargas had a great mix of inside fastballs and outside changeups and the Cubs couldn't get anything going at ALL. A run or two would mean the world. So when Alfonso hit that double, at that point (I think) that was as far as any Cub had gotten on the base path, and I let hope creep into the room.

But HA HA! The joke was on me.

Or more accurately, the joke was on Ryan Dempster who pitched 9 innings and gave up the 2-run homer but otherwise was masterful, and the Cubs get shut out zeeero to 2.

That, my friend, is comedy.

Anyway, another "wasted gem" from Dempster.

Another "exactly what I expected from the Cub bats" from the... Cub bats.

And the Late Show's next guest from Seattle will beeeee... Cliff Lee!

That's right, that guy from Cleveland with the 2.55 ERA.

So tonight be sure to tune into the "Late Show".

It's sure to keep the laughs coming!

Is Albert Pujols thinking about becoming a Cub?

Remember way back when Dusty Baker first became the Cubs manager?
I do. It was 2003, and the oddest thing happened right after Dusty was hired: good players on other teams said out loud in the paper that they wanted to be a Cub.

I wonder when that'll happen again.

We're about to come to 2010 trade-time. This season has been a teeter totter, and over the next couple weeks or so it's gonna go up or down. (Hey, the Sox suddenly became relevant - the same could happen with the Cubs, right?)

If they start winning, then everything Jim Hendry has been saying will happen will happen: they play like they're supposed to and ride out the rest of the season.

If the teeter totter goes down, then we can expect some trades to happen in July. The guys you've read the most about in trade rumor fodder have been D. Lee and Ted Lilly.

And I know about you guys.

You pretty much think like I do about Ted.

He's our coolest Cub. Our lone bad ass. Teddy Ballgame. Don't Tread On Ted. Terrible Ted Lilly of the Valley of the Shadow of Death.

The ONLY thing that could make this season worse is if he goes.

Lou Piniella says he's done everything he can do?

(if you're looking at this on Twitter, it's all drawings today)

Well, I've got some suggestions: 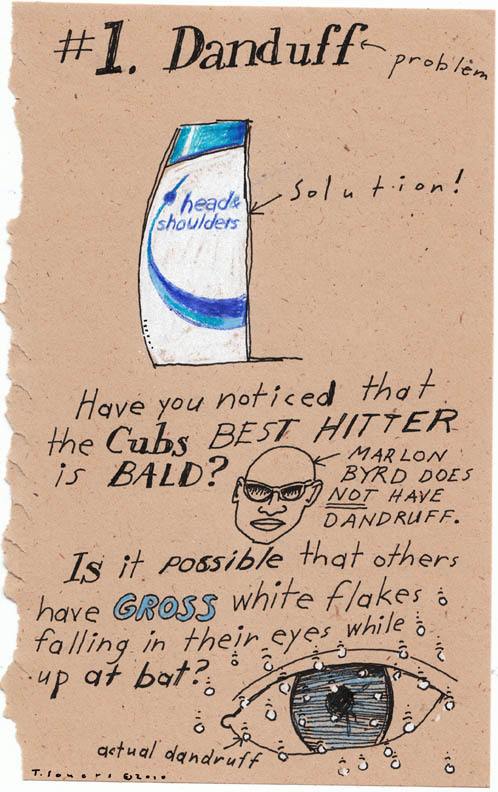 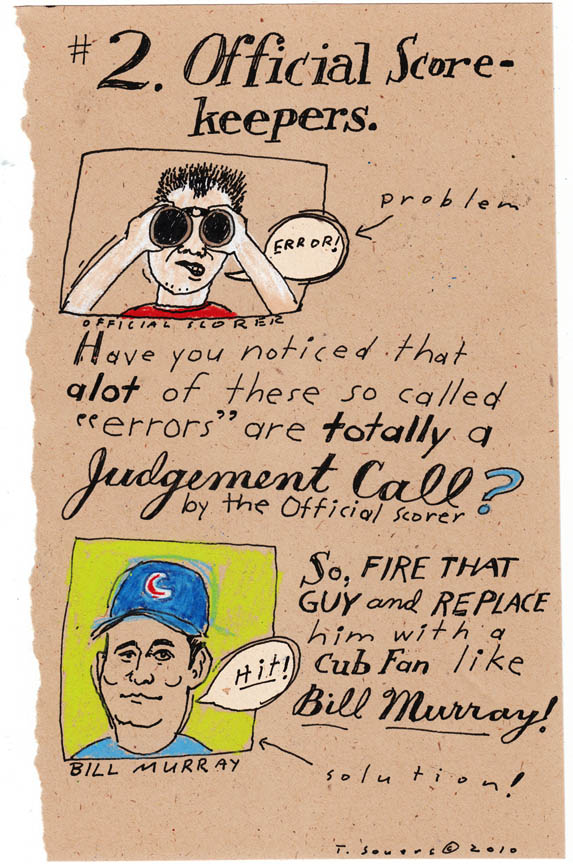 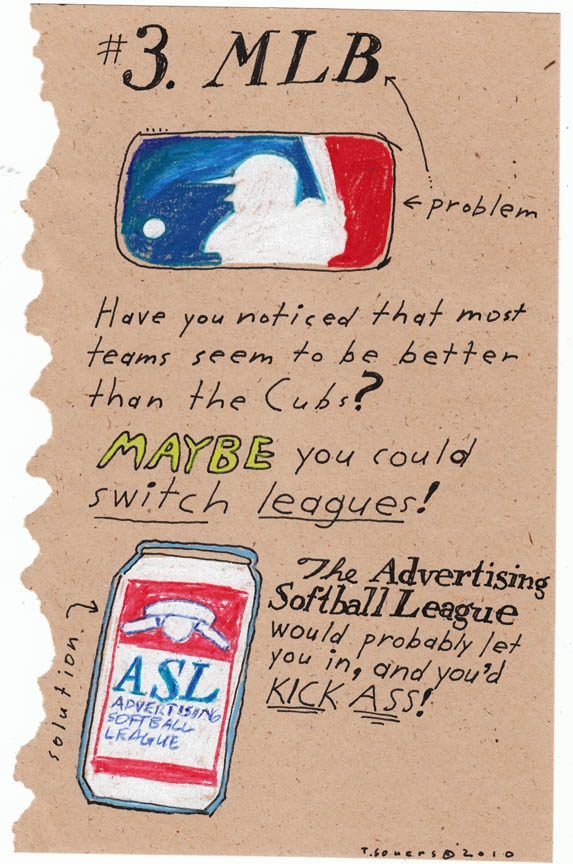 Okay Lou, get on these changes immediately and lets see how things come out for you.

Lastly, Happy Father's Day to you Dads, and to my Dad!

And even though the Cubs are at their absolute worst, it's still summer and baseball season, the Cubs will be on, and you deserve a day on the couch!

The Only Tavern In Hell plays the Cubs 24/7 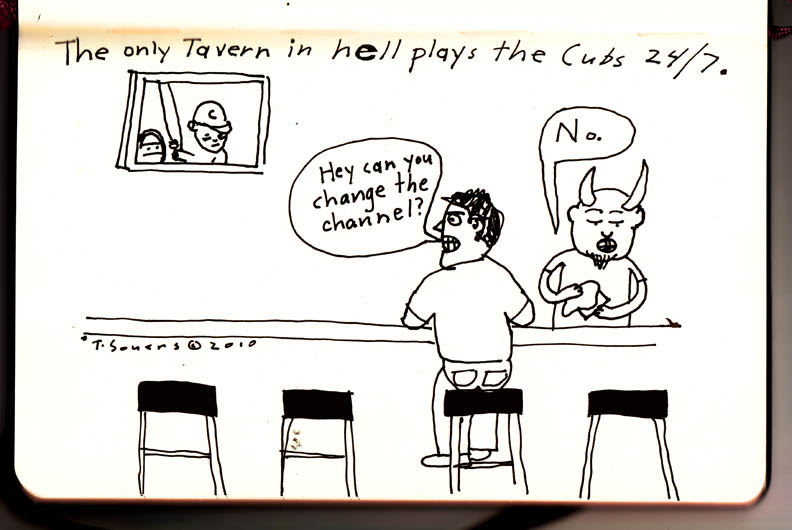 When you think of the enormous amount of pressure to help keep Lou Piniella's 2-game winning streak alive, you can understand the errors.

And when I think back on this season so far, I'm just so dang happy that Tyler Colvin has spent most of the time on the bench. God only knows what kind of havoc he'd have wreaked on this year's record.

It's Ted Lilly today, though.

And Lou can't put Bob Howry in two days in a row, do you think?

I might just have to pay a visit to the Only Tavern In Hell and watch.

PS: I liked this drawing so much, I made it a t-shirt. If you want, go here. It's on Zazzle, and even though it only shows one man's shirt, you can put the design on any color, male, female, size whatever. Click on the "see all" in CHOOSE YOUR STYLE AND COLOR.

Yeah, it's only 2 games but keep your pants on, will ya?

Yesterday's victory, appropriately, was a rare come from behinder.

Kosuke Fukudome was clutch. He scored the tying run in the 8th, and drove in the winner by hitting a single to right with the bases loaded in the 9th.

(If you're wondering in what part of the 9th Fukudome performed his heroics, that would be the bottom.)

And the naked truth of the deal was it was ex-Cub Michael Wuertz who got pantsed, giving up 2 hits and the tying run in .1 of an inning.

So, WOOO HOOOOOOOOOO! The Cubs kick some bootay!

Tomorrow the Angels come to town and we'll see if Odd Job Carlos Silva can get back on the winning track and keep Lou's streak going!

Last thing - I should have warned you up at the top not to stare at this art for too long. If you experience blindness, suicidal thoughts, or have a "Medusa Reaction" and turn to stone, please seek immediate medical help.