How did Aramis Ramirez bruise his thumb?

And I don't really understand it because Aramis swings so gently, like he's trying to catch a butterfly or something.

Actually, I'm sure that Tom Skilling takes into consideration the effect of Aramis' swinging bat when he makes his weather reports. I'm sure it's part of the reason people still call Chicago the Windy City. And I'm also sure that when he does connect, it's as violent a collision as there is in sports.

He's not going on the DL to fix it. Rather, Lou's gonna have him rest on the bench while Fontenot or Baker cover for him at third.

The question I've got, and I haven't really dug around, but exactly when did the thumb get bruised? Is this an excuse for pretty much all of April and May? Or is it kinda recent?

But maybe you got a laugh from the little cartoon thing up top. 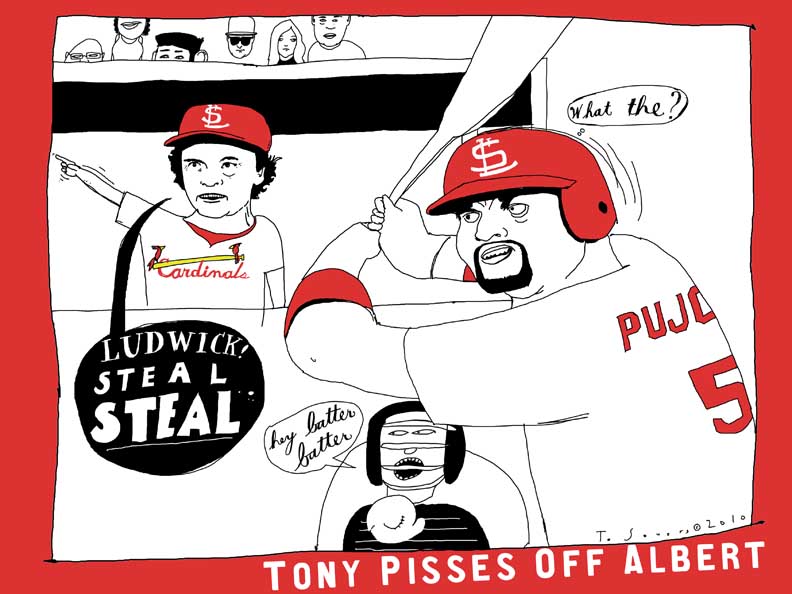 It's nice to see the Baseball Gods spread misery to places other than the Cubs, in fact I wish they'd do it a little more. In the case of the St. Louis Cardinals, we can find misery both physical and mental. And after living through the last few year's worth (okay hell, the last hundred years) of injury and season-ruining concepts like Milton Bradley, I feel no guilt whatsoever in thinking it couldn't happen to nicer guys than the Cards.

Last Saturday Cardinal starter Brad Penny went on the 15 day dl after pulling a latissimus dorsi. That's a giant muscle that takes up about the whole upper half of your back. That day he hit a grand slam vs. the Angels, but says it didn't happen on his swing, and later he would say he felt something wasn't right there for about 5 days.

So they brought up rookie PJ Walters, who has a 9.56 ERA in 16 games with the Cards last year.

Then Kyle Lohse had an MRI on his right forearm that revealed inflammation, and chances are he'll go do a 15 day dl thing as well. In any case, he's not pitching against the Cubs this weekend. There's apparently no structural damage, but Lohse says, "Something is going on."

So the Cards have some other choices from their system. Including Rich Hill.

Have you noticed that the headlines have been saying things like "Reds knock the Cards out of 1st" rather than, "Pujols homers again!"? That's because Albert Pujols is having (for him) a terrible month, and it's making him angry.

Couple games ago, Tony LaRussa had Ryan Ludwick try to steal with 2 out and Albert up. Ludwick was out. Albert has a tantrum in the dugout and Tony tells him to quit it. They yell at each other and finally Tony says, "I (blanking) know how to manage."

Now, I admire Tony for putting a superstar in his place, but I also love that this little story feels like a dull spot in that shiny Cardinal red.

And if you haven't noticed, Mark McGuire's feeling a little heat down there too since his hitters rank 11th in the NL in average and runs scored, and 10th in slugging.

So as we look forward to a Memorial Day Cubs/Cards series, it's nice to know it's nicely not so nice down there.

I got an email from Chris Jaffe over at Hardball Times, and he put together a little list of his 10-best Cubs/Cardinals games. It's a fun read.

Cubs, can you please get Dempster a W? 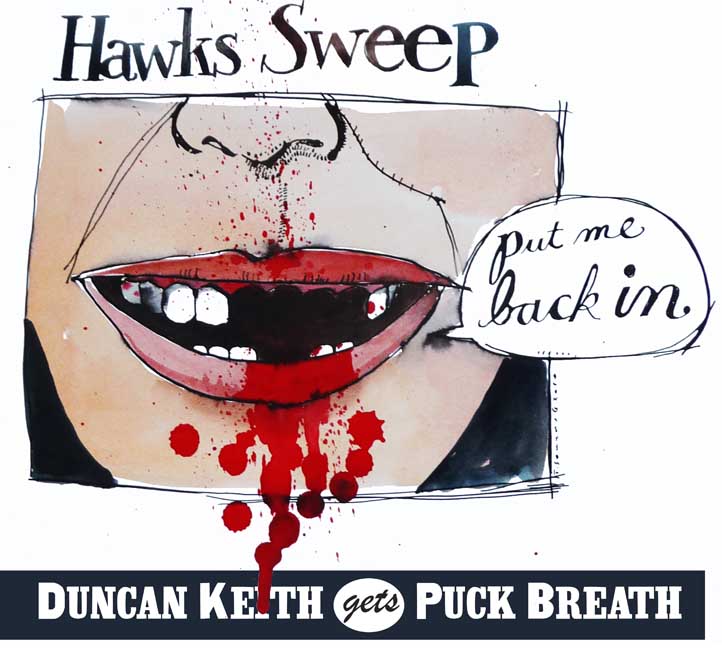 What can you say - hockey players are different.

You ever had 7 teeth knocked out?

I would imagine it hurts like a bastard, but besides that I figure I'd go into some kind of shock, then they'd bring a stretcher and carry me to a barstool til the priest arrived.

Duncan Keith let them put needles in his mouth and then he... came back out to play hockey.

And then the damndest thing happened: the Chicago Blackhawks swept the San Jose Sharks, and now they get to go play for the 2010 Stanley Cup. Probably against the Philadelphia Flyers.

For details and a great story read David Haugh - he's way better than me.

And in another part of the country, the Cubs messed with Texas, and it was awesome.

The impossible man, Carlos Silva, is now 6-0 as the Cubs take 2 of 3 from the Rangers. Alfonso Soriano with the big homer early and at the end of inning numero uno the Cubs had 4 runs and the Rangers zip.

We got to see newly acquired Bob Howry do pretty much what you expected - he came in in a tough situation with guys on and gives up a hit to the first guy he faced, scoring a run. Ahh, but why be negative? Sean Marshall was his usual brilliant self, and then Marmol. Probably the most exciting player on the team, that guy - his last pitch was just a little bit of negative space that Vlad Guerrero could only stare at after the ball went by.

And just to continue the visual content overload, I sadly watched the last episode of "Lost".

Yeah, pretty sappy ending there, but still that was years of amazing television.

Randy Wells is starting to figure it out. 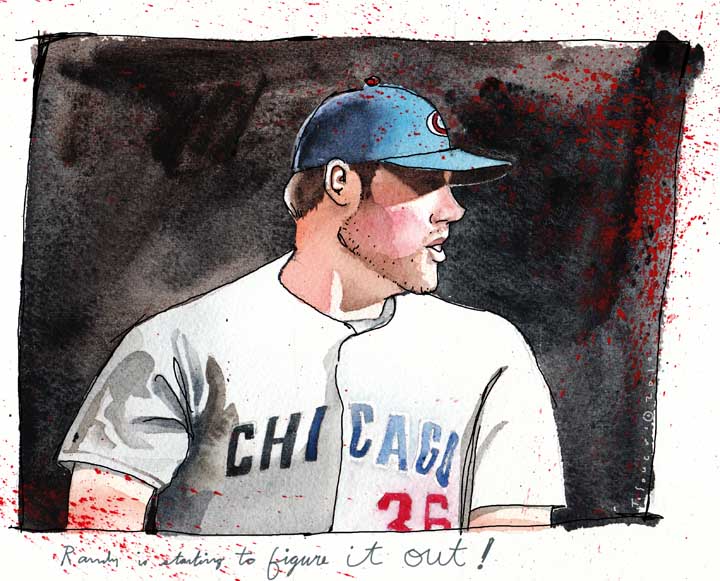 How awesome is Randy Wells?

You all heard about "the jog" he had with Ted Lilly after Randy had the rotten start vs. the Pirates a little bit back? They went on a run and had a little chat about forgetting when bad stuff happens.

So last night, when Wells gave up the Vlad Guererro and Nelson Cruz homers, and then walks Justin Smoak, and you're thinking it's all going to hell.

But Wells has a different perspective, and strikes out the next guy.

Then he retires 14 of the next 15 guys (the ump missed the call on the one hit), gets Vlad on his first pitch of the 9th, and you could see him barking on the way to the bench when Lou pulled him right after.

We get to go along for the ride - he's an open book when he talks. His quote in Wittenmyer's column totally cracked me up: "It's kinda cool. I'm starting to figure this thing out, starting to pitch deeper into ballgames and giving myself a chance to win."

Well, he didn't get the win (it went to Sean Marshall who was brilliant).

Tied going into the 10th, Tyler Colvin, Kosuke Fukudome, and Mike Fontenot get a double and 2 singles off that freaky sidearm guy from Texas. Cubs up 4-3 since Fontenot knocked in Colvin. Then Texas intentionally walks Starlin Castro to set up the double play. D Lee hits a grounder to the confused Texas 3rd baseman who throws to 2nd instead of home. Cubs up 5-3.

Not all she wrote, of course.

Carlos Marmol gave up a run, but I don't care. If the Cubs ever get into a rhythm and Marmol gets on a kind of regular closer schedule, he'll be juuuust fine. It's kinda messy in that bullpen, to put it mildly.

In a couple hours it'll be Sports Afternoon Heaven with the Cubs at 1 and the Blackhawks at 2.

I don't know exactly what that pose was, but when Dustin Byfuglien scored the winning goal in overtime last night, he raised his hands and, well... lifted a leg as he skated by the absolutely crazed Chicago Blackhawk home crowd.

It was a truly magic moment. But you know Dustin, you could take a lesson or two from Patrick Kane or something when it comes to the after goal "thing". (Not that I'm a big fan of any of that, especially in the NFL.)

Ahhhh, just kiddin'. I think he was about to run into the boards so he kept his leg out of the way.

In any case, THE BLACKHAWKS ARE NOW ONE WIN AWAY FROM THE STANLEY CUP FINALS!

And really, Byfuglien was one of many hard working Hawks last night. Certainly don't want to downplay the winning goal, but the whole team effort is never more apparent than when you're watching the Hawks.

Honestly, on a maturity scale for being a hockey-watching fan? I'm about a 1 year old. A baby. Brand new. Can't even walk yet, let alone really talk it. But I'm hooked right now, and it's sooooo much fun.

How about Dave Bolland's breakaway goal? How loud were you screaming? How about his pass to Buff?

Meanwhile down in Texas, Ted Lilly continues his steady climb back to BAMF as he shuts down the big-hitting Rangers for 6.2 innings giving up just 6 hits and 2 runs, but the Cub hitters only manage to get 1 dinky run and lose 1-2.

Nobody on this team has "clutch" anywhere in their nickname, and it's such a shame because they do get on base. It's like...1 more hit at the right time and their record could be totally different.

Bob Howry or Blackhawks. Hmm...what to talk about?

I figure EVERYBODY'S gonna be talking about Bob Howry coming back to the Cubs today.

Here's what I drew in less than 3 minutes last night: 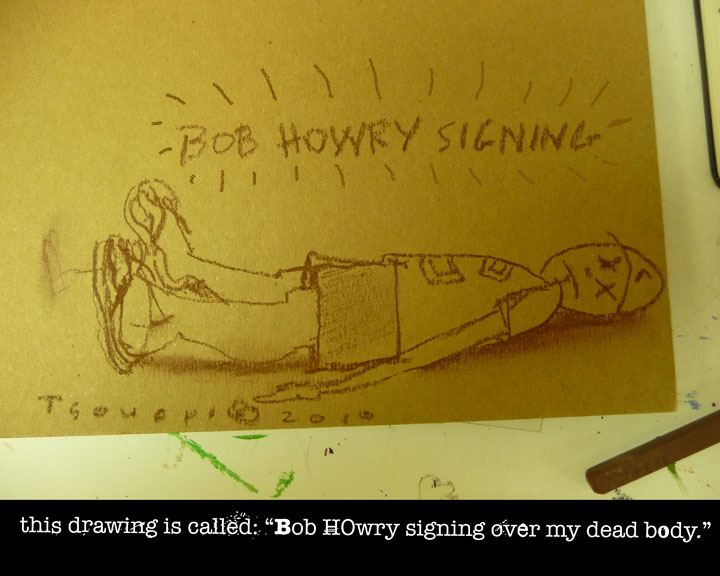 I guess I don't have a say in the matter, do I?

But... did we not just discuss how truly awful ol' Bob Howry was when the Cubs last visited Arizona?

Yet, there the story is in MLB TRADERUMORS: Cubs close to signing Bob Howry.

You know, it's not as if the Chicago Faithful don't have enough to be not faithful about - why add gasoline to the fire? I mean, between this year and last I think I've heard enough booing to last a non-World Series century. Yes, I've read that he'll help the kids and he's a great guy, but, you know... in the world of ideas, this one is begging for the naysayers to speak up. Can't you hear it? "He'll sure show the kids how to give up that long ball..."

Well, at least the Cubs lost yesterday and left the tying run on 3rd with nobody out in the top of the 9th!

Ahhh, that was mean.

It was the Phillies, it was actually a good game and the Cubs were in it all the way to the end. Ryan Dempster is always good, but so far this season he's just not getting any luck at all.

I guess they flew to Texas last night, and they'll play the Rangers today. Did you know they were in first in the AL West? Over the Angels and A's?

In fact, I don't know squat about the Rangers. Hopefully I learn that they don't match up against the Cubs. It'll be Terrible Ted on the mound tonight!

Now, for the other part of today's post: The Chicago Blackhawks host the San Jose Sharks tonight.

Everybody got all weird about the Hawks winning at home vs. on the road, that maybe they're better playing at the other guy's place.

I bet Brent Seabrook's got something to say about that. 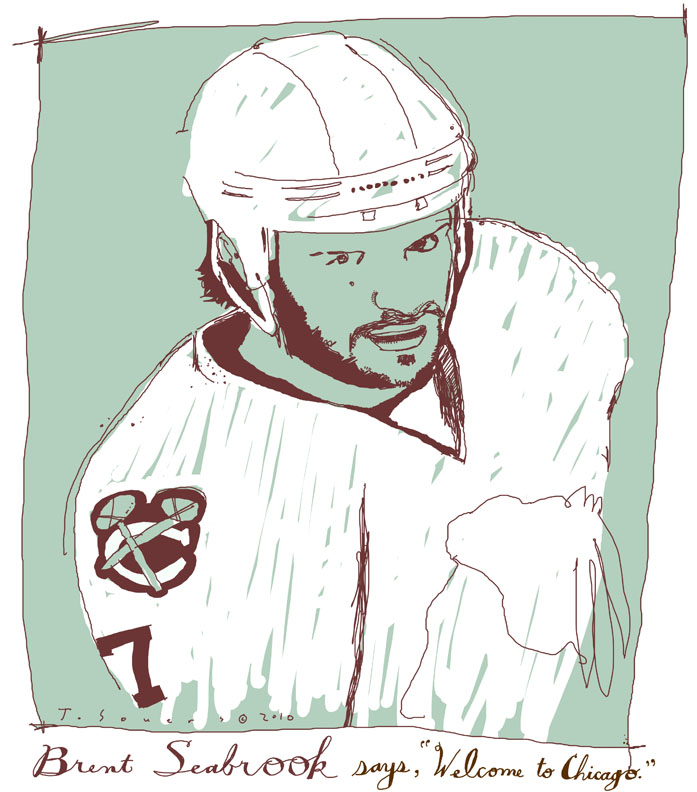 It's all on tonight, and if you're a Chicago fan (yeah, even if you're a Sox fan), it's gonna be an awesome 7:00 PM, and I'll be switching back and forth for a couple hours of sports bliss.

PS: Mike Huang, my buddy and excellent writer at VINELINE (and the guy who gives me the illustration assignments there every month) is covering the MLB draft for the Sporting News. It's all about the young talent available in high school and college. Please go here, learn something about the kids coming up, and leave a comment.