I have no idea how many home runs Albert Pujols has hit at Wrigley Field, but it's not a small number.

Actually, he's pretty much an equal opportunity NL-Killer, but you just notice them more here at Wrigley since lots of them fly out to the street or somebody's yard. And yesterday he hit 3 of 'em.

After the game, Ryan Dempster, who is about the best post-game talker guy I've ever seen with his humble, true, and sometimes pretty funny observations said, "The first home run he hit, it happens. The second home run, he fouled off a lot of really good pitches leading up to that, and then I hung a slider over the middle of the plate and he hit it off the firehouse across the street."

Anyway, he wasn't alone with the run-giving, but I don't need to go into that.

Lou said he was maybe gonna make some changes in the lineup, and one would hope that means putting in Tyler Colvin. And Mike Fontenot - he's on some kind of streak or something. Why is he on the bench?

Last night they flew to Pittsburgh, home of the 2010 Cubs' New Main Nemesis even though they're FREAKING HORRIBLE.

5 of Pittsburgh's 20 wins have come against the Cubs. Uhhh. Lets see twenty goes into fiiiiiiiiiiiiiivve? Addthedecimalsotwentyintofiftyispointtwofive.....That's 25%!

One quarter of Pirate Ws have come against our favorite team.

Could you not just hurl?

And today we won't speak of the last time out, but Randy Wells for some reason gets to start a couple days after his last start.

It's a 12:35 game, perfect for turning on the radio and enjoying a couple cold ones out back.

And of course later tonight is Game Two.

You know what I'm talkin' bout.

Lastly, it's Memorial Day, as always a proud day for me because my Dad is a retired USAF Lieutenant Colonel.

Take a moment to think about what The United States Military is doing for you, what they have done for you, and what they will do for you.

And for your country.

No better time than the playing of The Star Spangled Banner, which you'll hear twice today.

Cubs 5 Cardinals 0. I think I believe in Silva now. 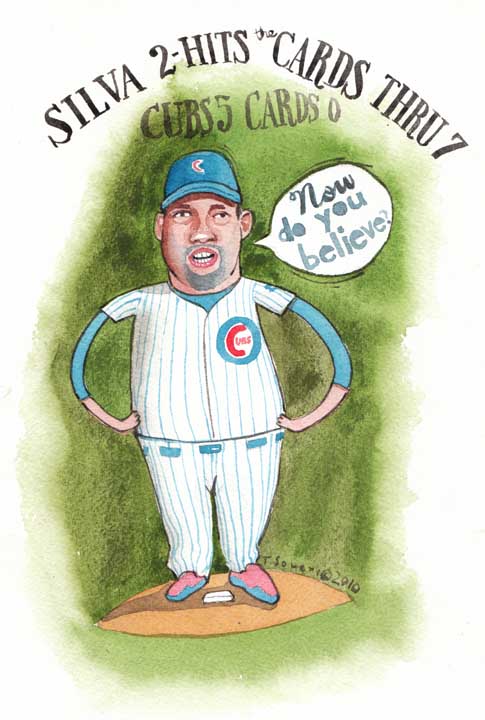 I don't know about you, but I just didn't...quite believe in Carlos Silva.

Too good to be true.

Yeah yeah, 6 wins in a row, undefeated and all that, but I thought for sure the Cardinals would expose him as some kind of mean joke being played on us Cub Fans.

But any time a guy can take St. Louis and make 'em whiff 11 times, hold 'em scoreless thru 7 innings, give up only 2 hits and none of them from Albert Pujols?

BROTHER, PASS ME THAT HOLY WATER BECAUSE I BELIEVE!

Starlin Castro with the amazing glove?

Mike Fontenot with 2 triples in a row?

I AM SIGNED UP!

A 3-run 4th coming from a walk, stolen base, a Cardinal error, 2 singles and a triple?

I will no longer doubt you, Carlos Silva.

Then a pause for dinner.

And then THE HAWKS TAKE GAME ONE 6-5!

Yeah, it was a good day and night. 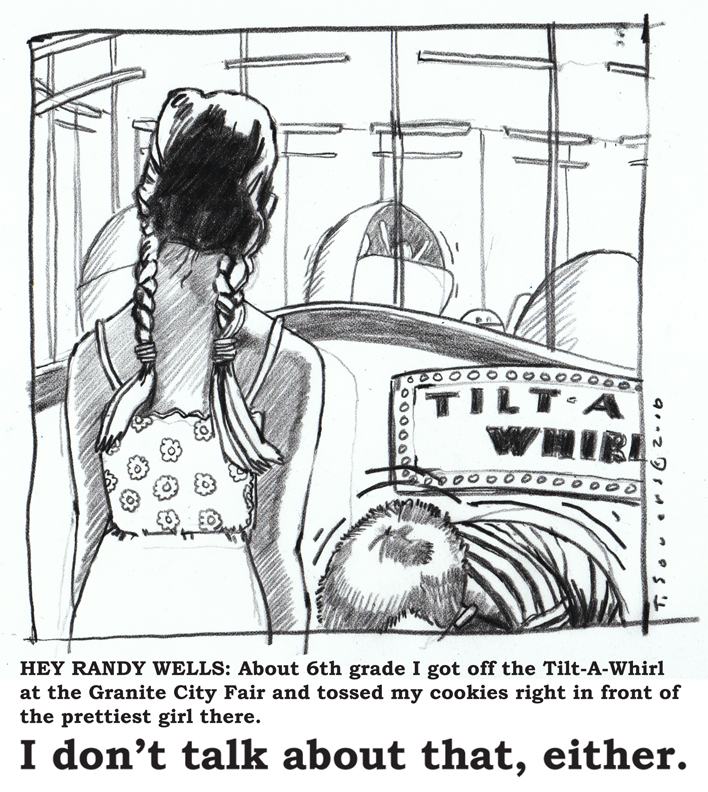 My advice to myself has always been, "Man, don't even think about that again." And the surest way to do that is to not talk about it.

We'll mention it once for the record here, but after this?

We had the Agency Seats yesterday, right down there near Tom Ricketts and everything. It's Memorial Day Weekend. It's the Cubs vs. the Cards. It's unbelievably gorgeous out. And in about a minute it was Cards 5 Cubs nothin', and Randy Wells was walking right towards us heading for the shower.

About the only good things that happened were James Russell looked really good and held the Cards scoreless for 4 innings, Marlon Byrd made a diving catch that took my breath away, Alfonso made a pretty good one too, and Tyler Colvin hit a homer batting (I have to think) for the first time ever against Cardinal Ace Chris Carpenter. And man, it was blowing IN.

I got some awesome photos: 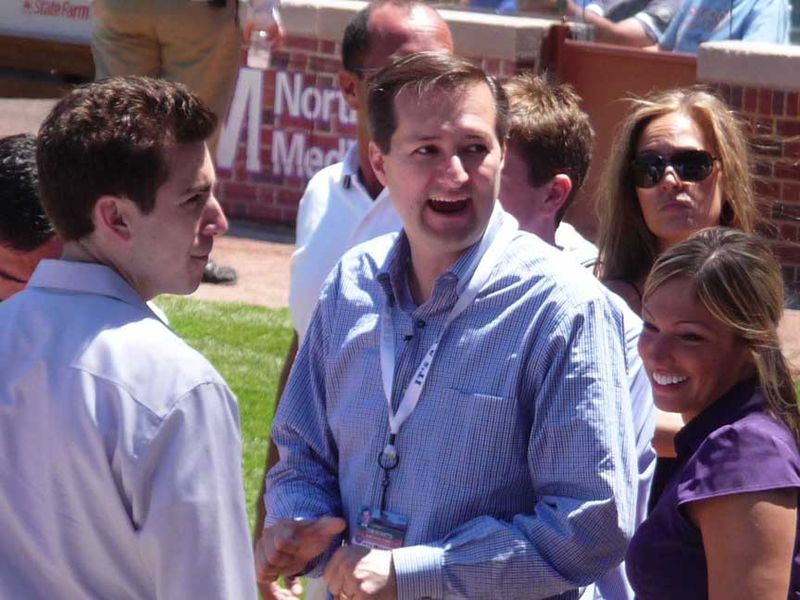 Before the game, Tom Ricketts was just walking around shaking hands with people, getting in photos with them, laughing and having fun. I LOVE this guy. 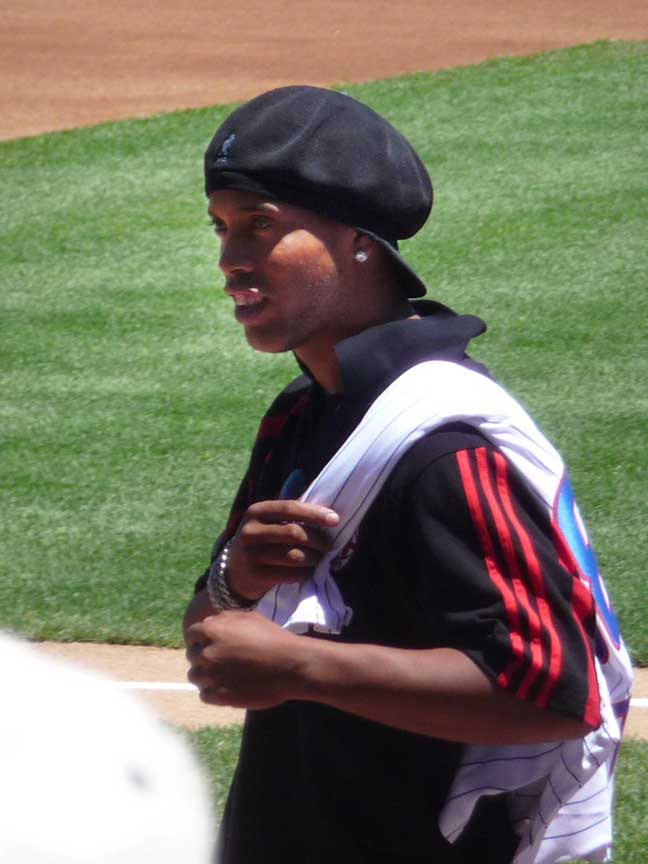 Brazilian soccer god Ronaldinho. We'll be hearing his name alot once the World Cup starts up. 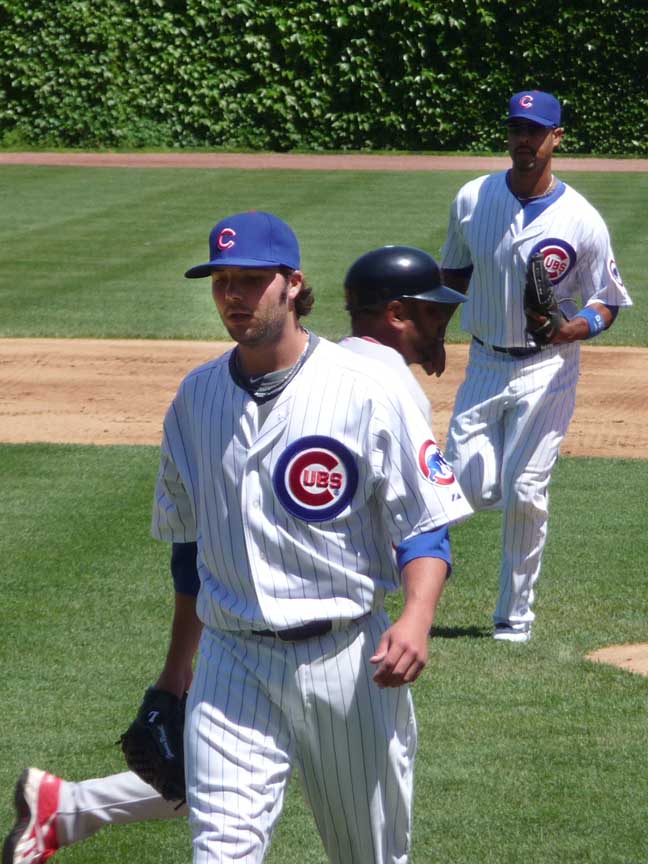 James Russell looks pretty composed after getting out #3 in the first. 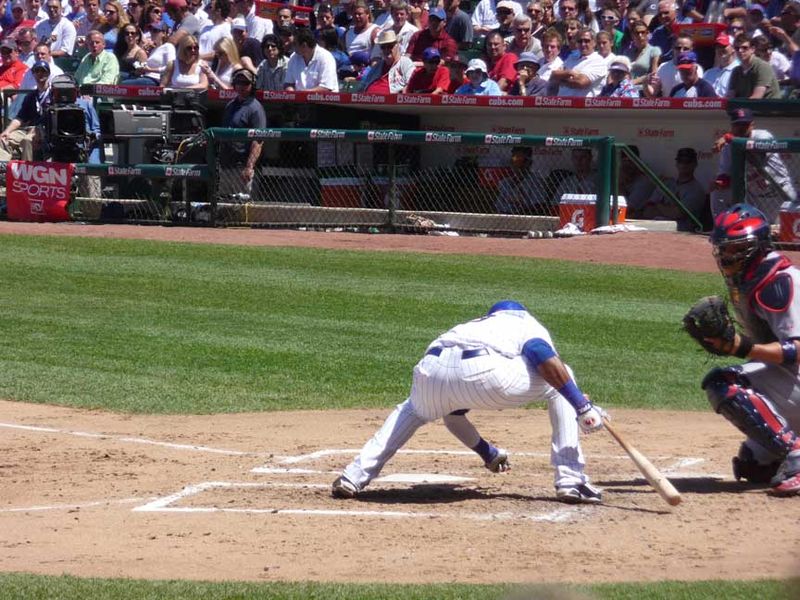 Carpenter's first pitch to Castro was a softie changeup, but up high and tight. Welcome, Starlin. My name is Chris Carpenter and I've just gotten in your head. 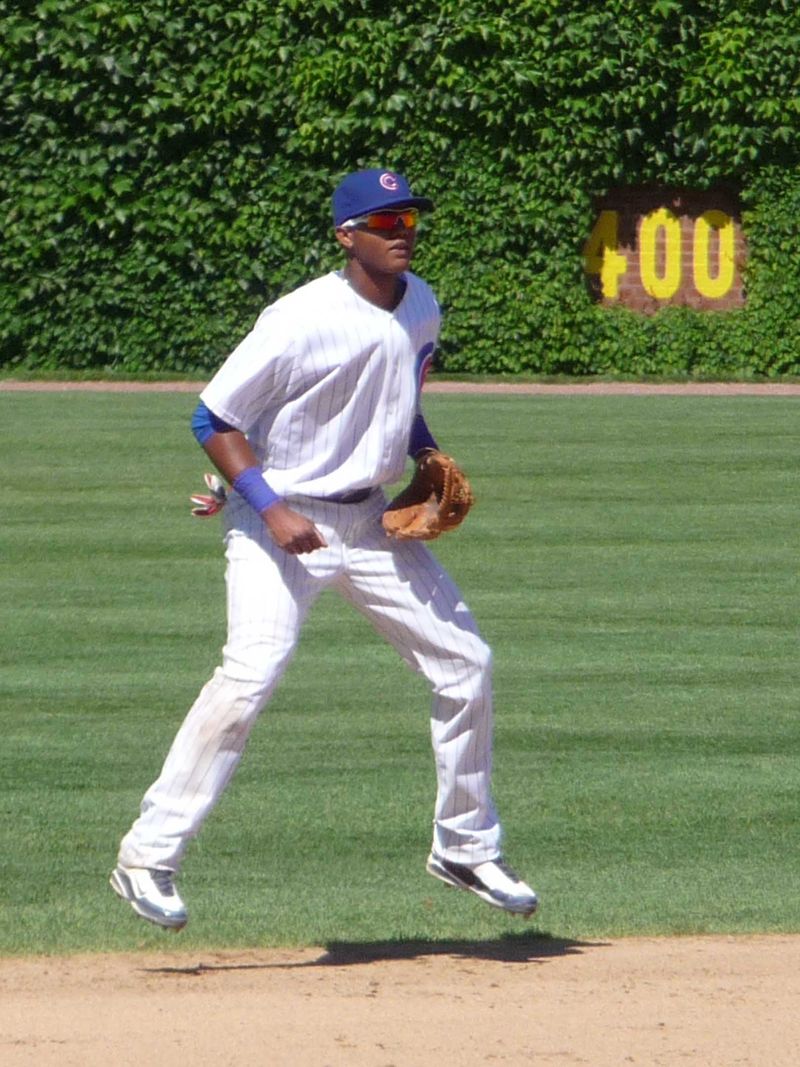 I'd never noticed this on tv, but every time a pitch is thrown, Starlin Castro literally jumps up to get ready for the ball. 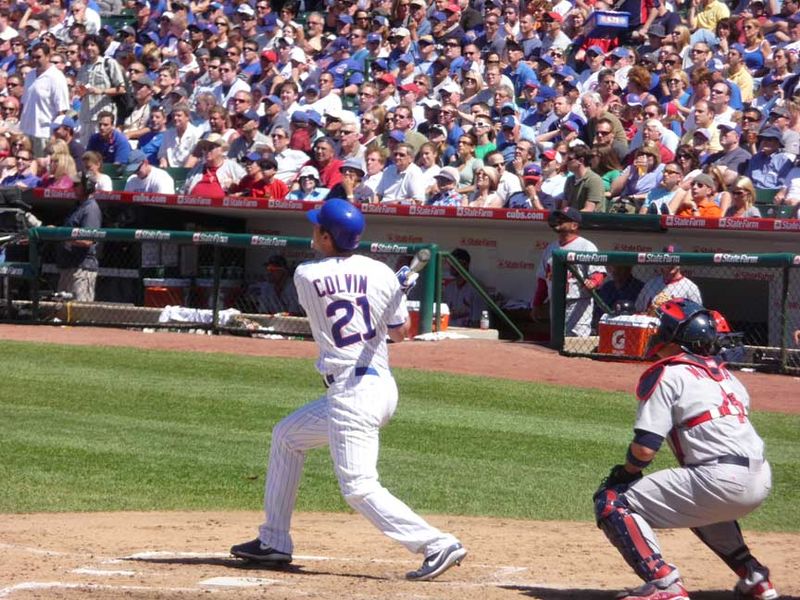 One of those lucky things where I happened to take a photo just as Colvin launches it to the RF bleachers. Today it's Carlos Silva vs. Adam Ottavino who has no stats because...he's never pitched in the Bigs.

This means one of two things: 1) the Cubs either rack the guy or 2) he'll throw a shut out.

I vote for number 1.

AND TONIGHT IS STANLEY CUP FINAL GAME NUMBER ONE! 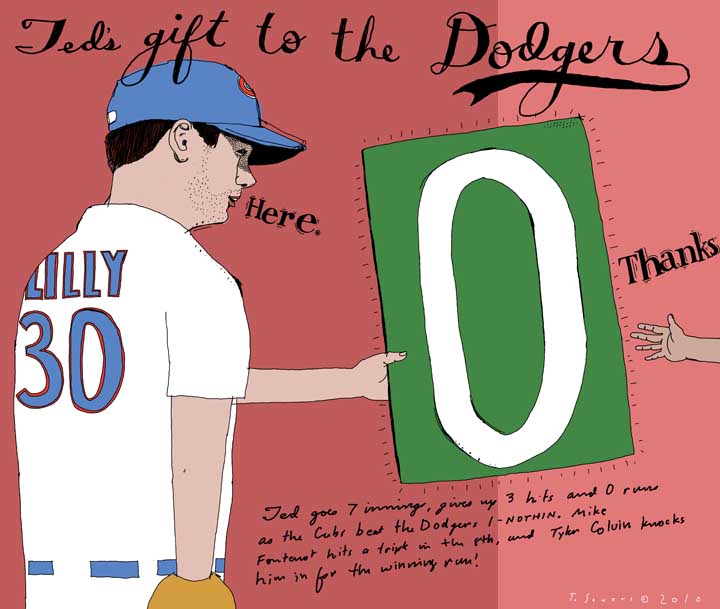 No, the Dodgers aren't the Cards or even the Brewers, but they're kinda up there on the teams-I-love-to-beat list.

The Dodger rookie, John Ely, was pretty impressive as well until Mikey Fontenot came off the bench and smacked a triple past hapless Dodger outfielder Xavier Paul, who got so flustered he let Tyler Colvin's next hit get by him too.

You GOT to love the kids!

I'd just turned on Emily's radio in my office after a loooong meeting, and just as Olson walked in Fontenot hits the triple. Kinda loud at my end of the hall.

So the Cubs are pretty much semi-hot having taken 2 series in a row, and 3 of their last 4.

Weirdness follows the Cubs at all times of course. Big Z goes to the hospital with a stomach ache, and Jeff Baker (way scarier) had to leave the game after losing sight in his right eye. Also down on the farm, the Cubs moved starting pitcher Andrew Cashner to the bullpen. Hmmm...

I'm about to jump in the shower and get down to the park because it's a special day today: the Cardinals are in town. There is NOTHING BETTER IN THE ENTIRE WORLD than the Cubs playing the Cards on Memorial Day weekend at Wrigley Field!

And then tomorrow tonight the puck drops at 7 on channel 5 for game one of the Stanley Cup Finals with your hosts, the Chicago Blackhawks, welcoming the Philadelphia Flyers.

What a freaking WEEKEND for sports!

Well, unfortunately he didn't do so well last night, so I figure Tom Gorzellany's heading for the bullpen.

Who could have predicted that Carlos Silva would be undefeated almost into June?

Anyway, he's not officially moved and nobody's saying anything about it yet from Cubs management, so this is just the popular hunch I guess.

I went last night. It was not crowded, it was beautiful out, Reed Johnson started in right (good to see him get a start), Tyler Colvin started in center and batted 5th.

The not so good: horrendous fielding by the Cubs, a signaling man in front of me (see idiots of the game), Colvin didn't hit, the lights went out, and of course the Dodgers were absolutely crushing Gorzy's pitches. James Loney. That guy is a menace to Cubkind.

Here are some photos: 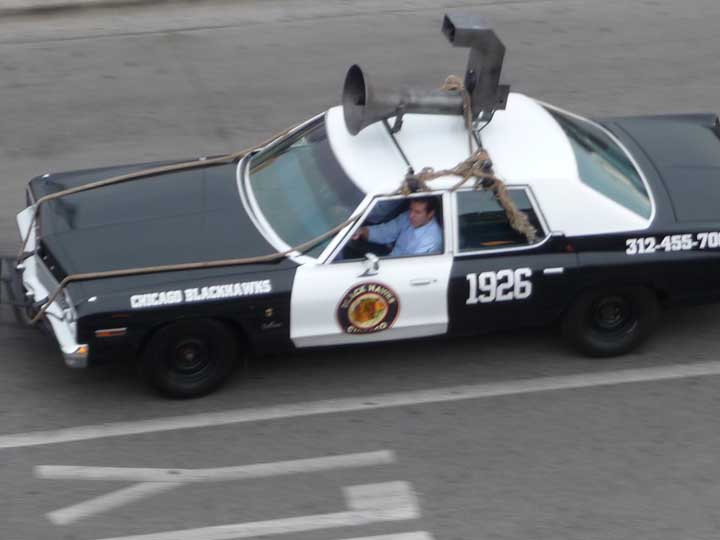 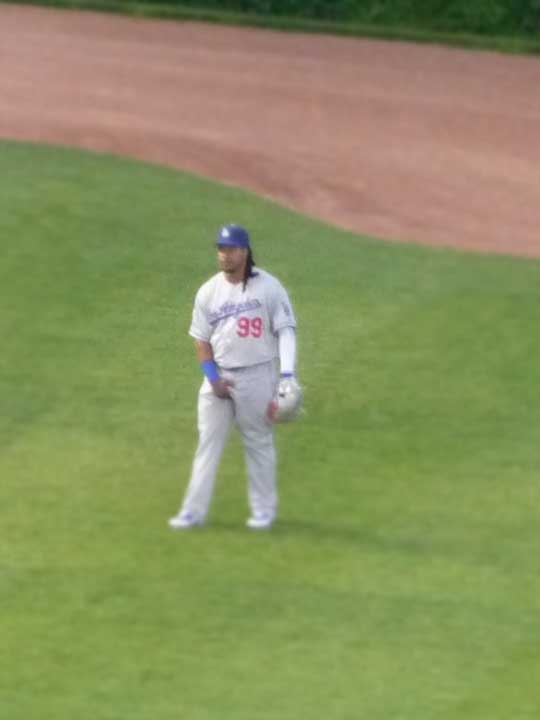 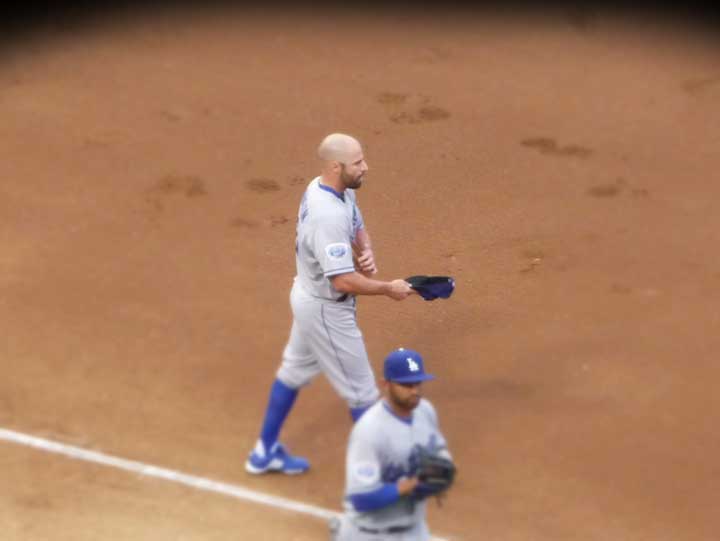 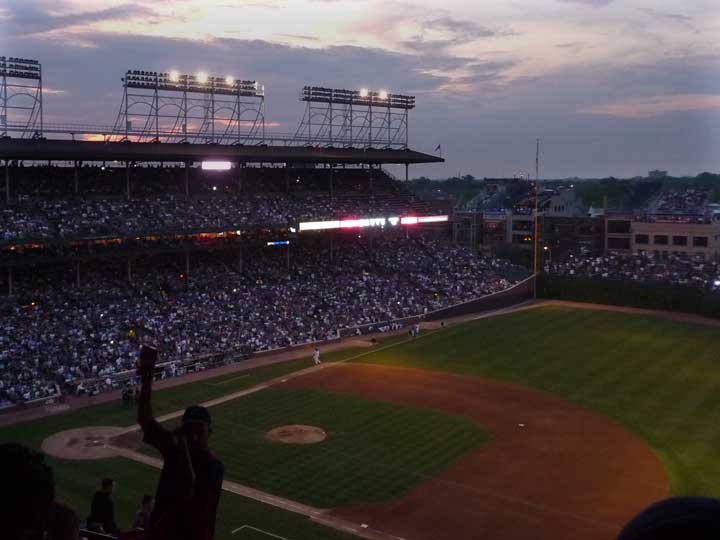 So wish I was there.

WHY IS NADY STARTING IN LEFT?

I Hope it's blowing in!

I went to the game last night. These photos are from a tad after 7 - the first pitch is in about a minute. And as you can see there are a million empty seats. Look at the center field bleachers! There's nobody there.

Yes, it was a work night and all the seats typically don't fill up til later but last night...they never came close.

It was gorgeous out - somewhere in the 70's outside, it was the surging and red hot Los Angeles Dodgers, it was Ryan Dempster on the mound, it turned out to be maybe D. Lee's turning point with the bat... and a million empty seats.

You know how Ron and Pat always say the game's a sellout? That's because it is, only all the seats have been sold to scalpers.

So here's what I would encourage you to do.

Go walk around Wrigley about game time tonight. If it's anything like it was last night, there will be scalpers with literally fist-fulls of tickets in their hands. Do not pay what they ask. In fact, start with face value as your offer. Wait til the first inning and try to get 'em even cheaper.

In any case, it's a buyer's market.

Tonight it's Tom Gorzellany and a Cub team that looks like it's finding a new personality.

See you at the ballpark. 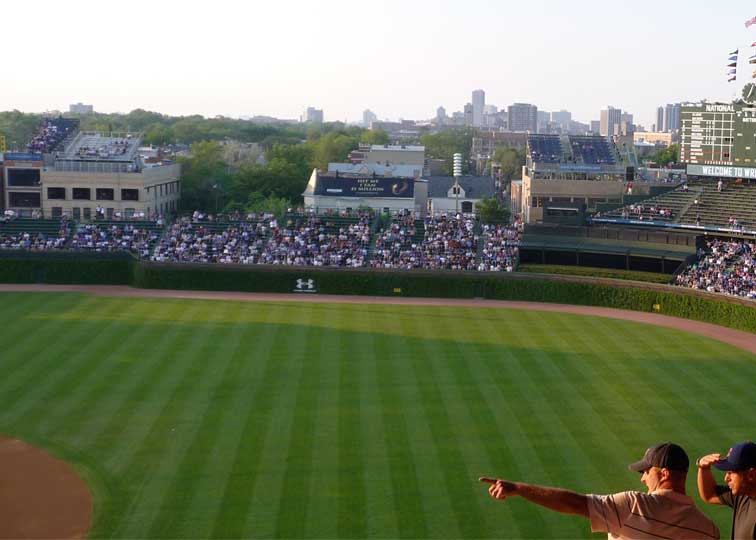 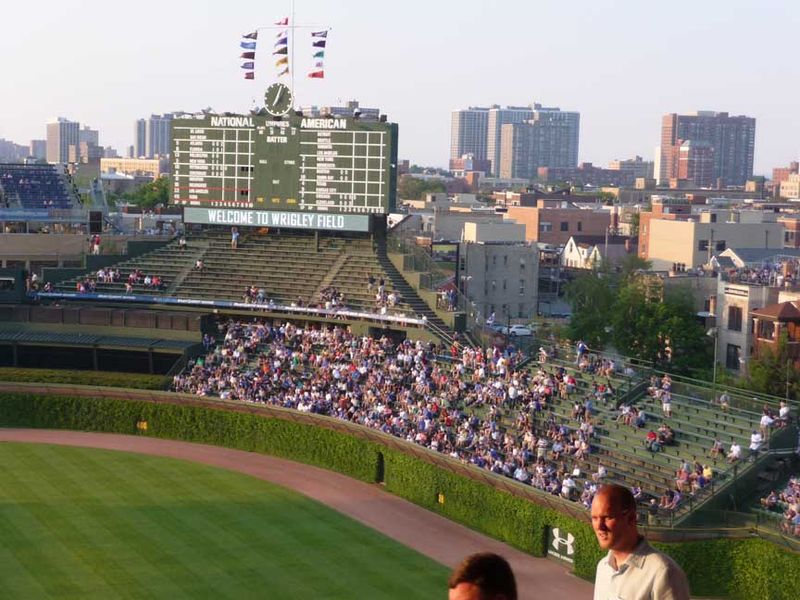