The Chicago Cubs have my head swimming

The other day I'm standing there and Linton says, "Hey, I just got a tweet that says Zambrano's moving to the pen."

Because if it's true, then it means just so much bad stuff: that the bullpen weakness isn't just a flukey thing that'll get better on it's own... that maybe I've been hearing lies about the strength of the farm system... that Big Z is worse than I thought...and it means the Cubs are waaay more desperate than I thought.

So like any Cub fan I reacted with pure denial: "Hilarious, Linton. Because that's INSANE."

You know this big trip I've been on? Right at the beginning I was the victim of perhaps the greatest production prank ever (I'll share with you shortly). So my bullshit alarm is still on high, and when he showed me his blackberry I still thought maybe he'd created the tweet on his own or something.

I still didn't believe it until way later when I got to my room (we're in Orlando) and was able to go around online and read about it everywhere.

Here's what I know now: Geovanny Soto and Mike Fontenot are both hitting over .320 while D Lee is at .241 and Aramis Ramirez .127; the Cubs have the 2nd lowest run total in the NL, AND Big Z is a set-up guy.

See the illustration above.

We've all managed our expectations to pretty low, but right now the Cubs are lower than that original low which means I'll have to adjust to a lower low or continue to feel lower than I prefer.

Leaving 10 on base, they lost 2-5 again last night to the lowly Mets with Gorzy on the mound.

Tonight it's tough luck Dempster vs. the Brewers.

There's a weather metaphor/device that writers have used pretty much since fiction began: You'll read something about black clouds on the horizon, or the wind picking up, maybe it's lightning flashes in the distance.

And what it means is something really big is about to happen.

Some epic battle between good and evil is right around the corner. Dirty Harry's gonna go shoot that bad man with the bus full of kids. Liam Neeson dramatically announces, "RELEASE THE KRAKEN!" Or maybe the college girls on that camping weekend are about to cross paths with those damn zombies...

He had a really good outing on Monday, and they say he'll be back with the Cubs this weekend.

The Cubs need a shot in the arm like nobody's business, and Ted's just the guy to do it.

I don't think of Ted as just a starting pitcher.

He's got alot more to do with the overall Cub personality - the chip on the shoulder thing, stuff like that.

The Cubs have been off (aNOTHER loss to the Mets?), and it's really awful because you figure the early games can define the team.

But it's only a couple weeks in, and everybody should just chill a little.

By now we should all know Lou will tinker til he's happy, and I don't think he's nearly done.

But still, he'll be back, and that's something to get UP for. 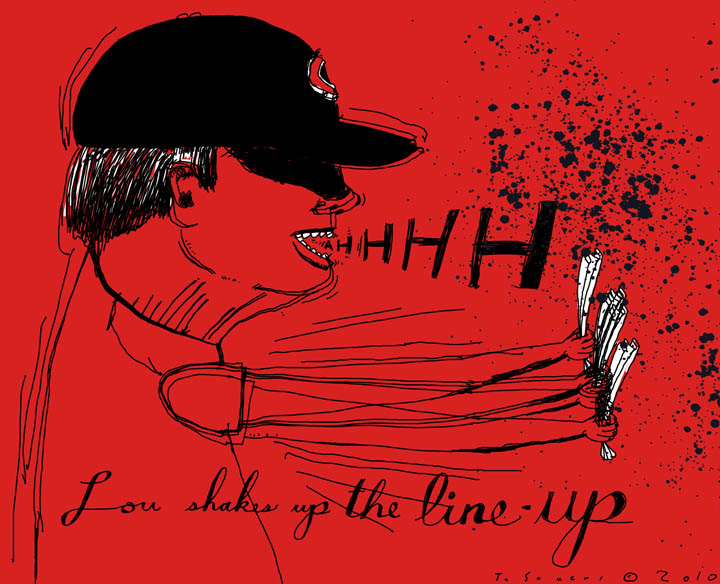 Did you hear Lou Piniella after the game?

He did NOT sound happy.

So it sounded like Marlon Byrd is going to lead off, and Theriot will hit 8th, Baker hist 2nd, Xavier Nady bats cleanup, and Geo 7th. At least against lefties. So, those changes also mean Kosuke will be sitting when the Cubs play the Mets and lefty starter Jon Niese tonight.

But man... it was one of those sucker punches for you and me, gagging up the lead to the horrible Astros after Ryan Dempster pitched like such a god for 7 and 2/3rds.

Final Cubs 2 Astros 3, the Cubs losing the series at Wrigley.

We've all read that this is supposed to be the easiest part of the Cubs schedule, in fact the easiest in the Bigs to start the season except for the Atlanta series, so this ain't good.

But one thing that IS good is this: Terrible Ted is making his final minor league tune-up start today, and should be joining the Cubs this weekend!

Lastly, I was lucky enough to be at the Blackhawks AWESOME 2-zip shutout victory last night with my cousin Gurke, a huge fan. And extra special lucky because we got to sit in the front row! These seats were impossible.

Joel Quenneville - you can see him predicting they'll score 2 here! 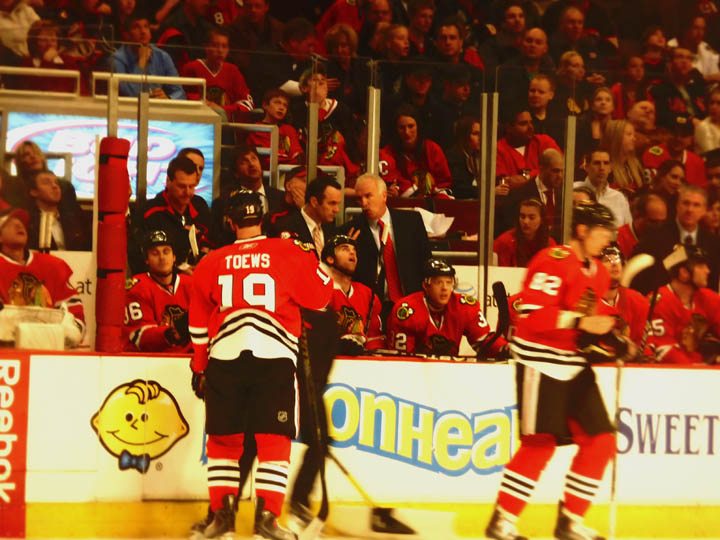 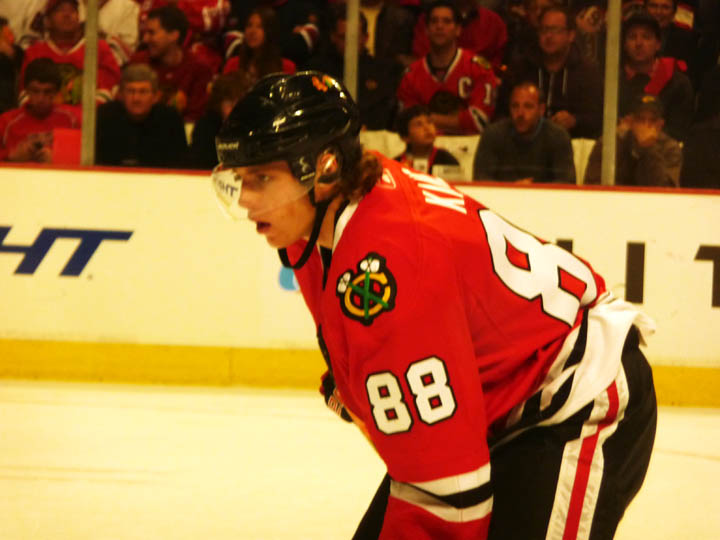 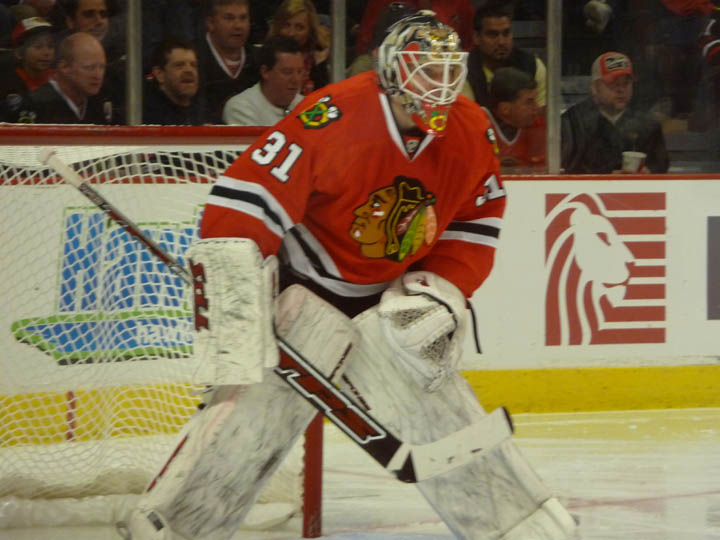 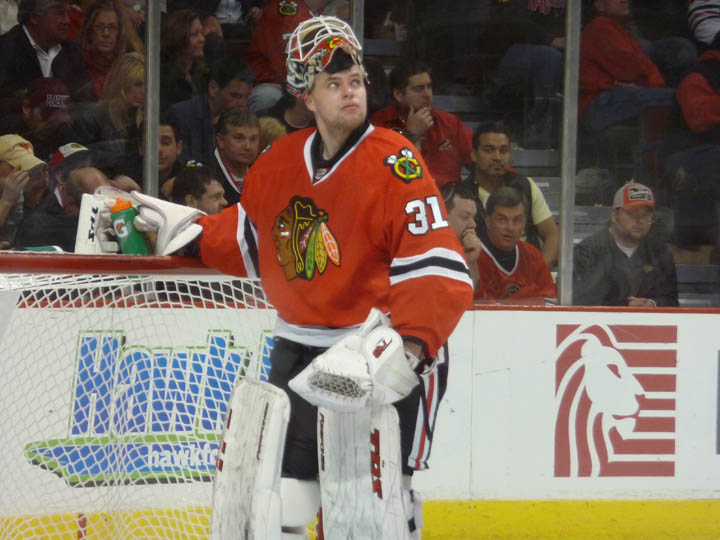 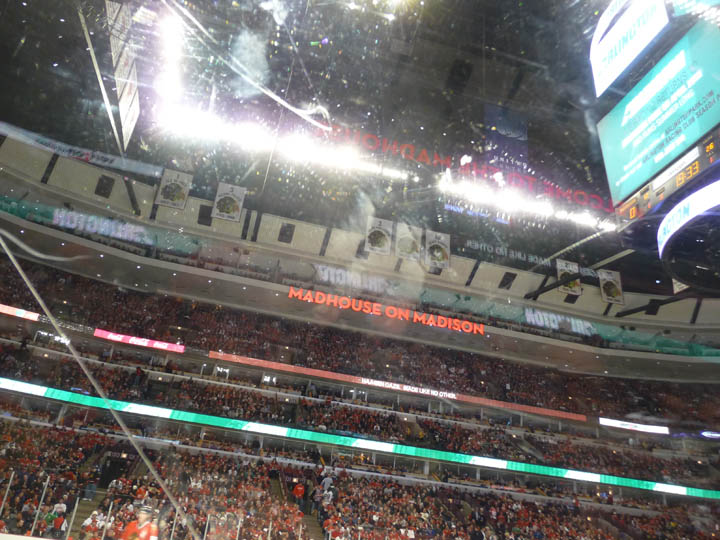 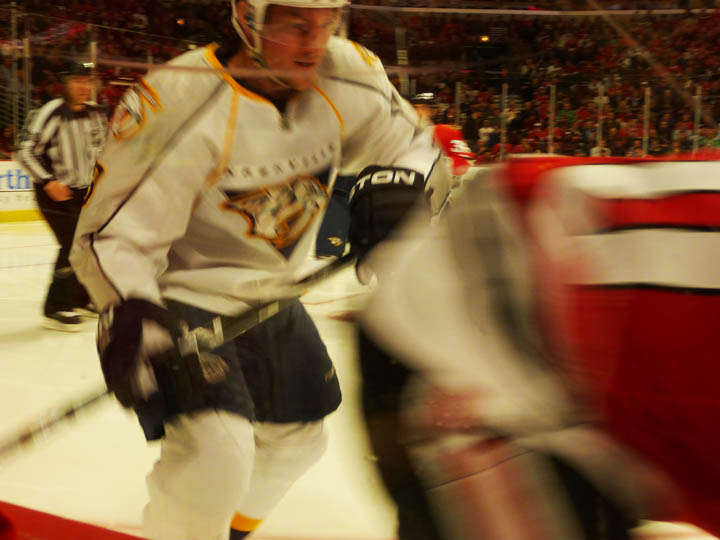 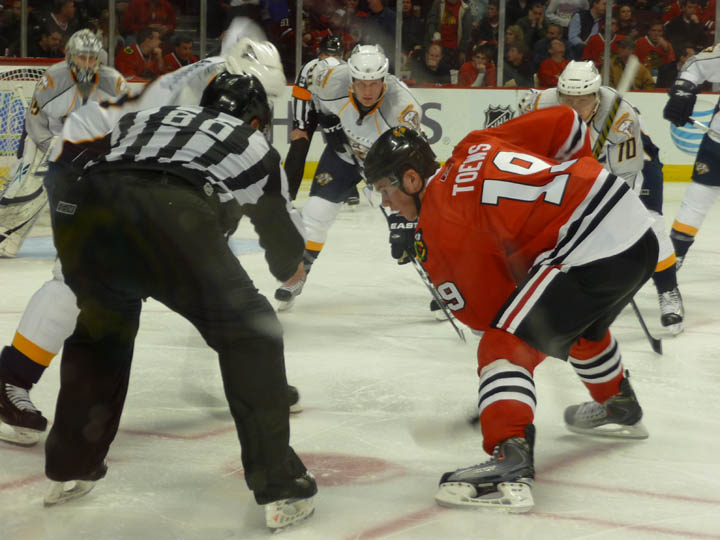 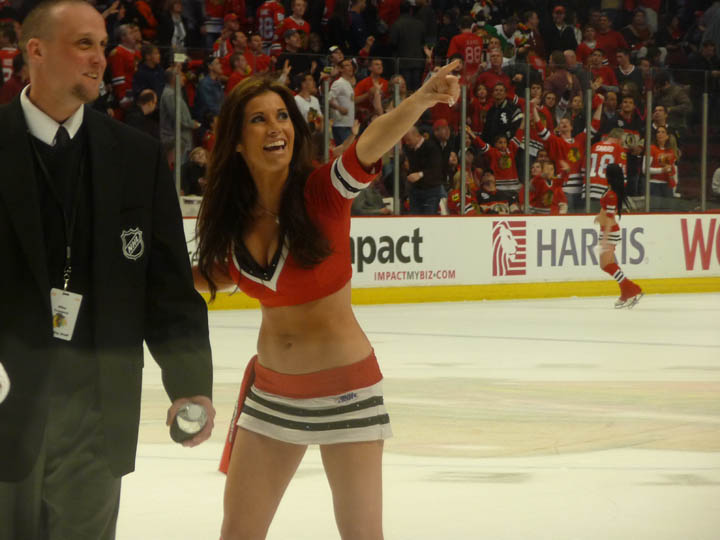 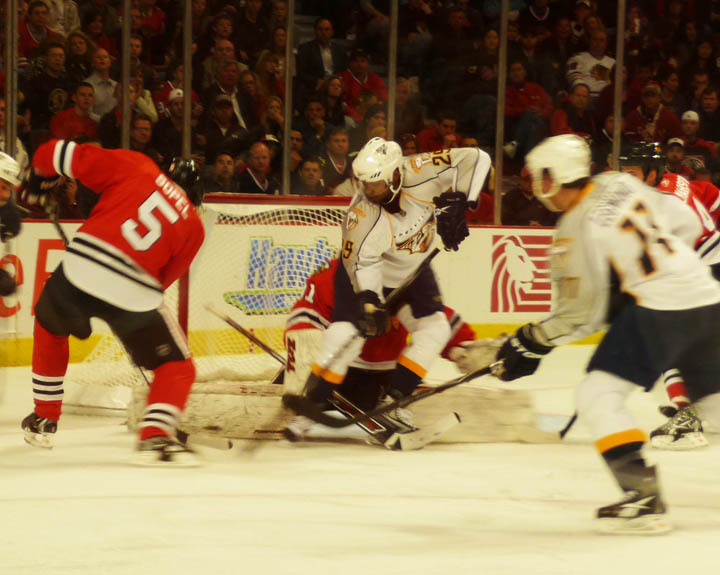 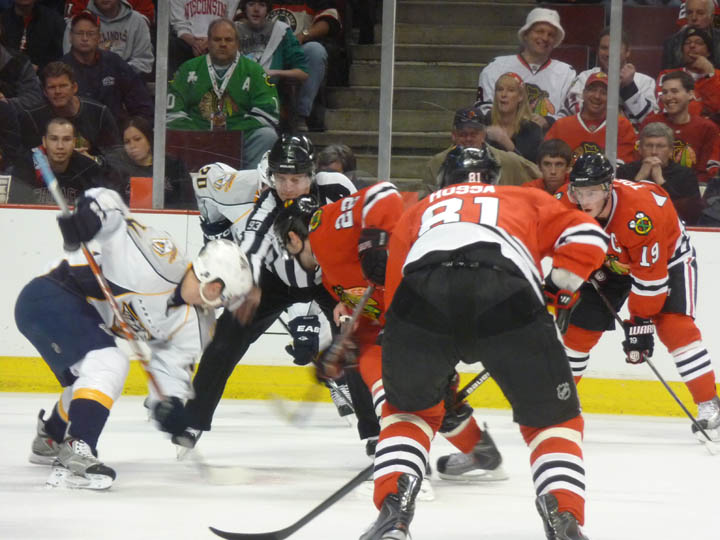 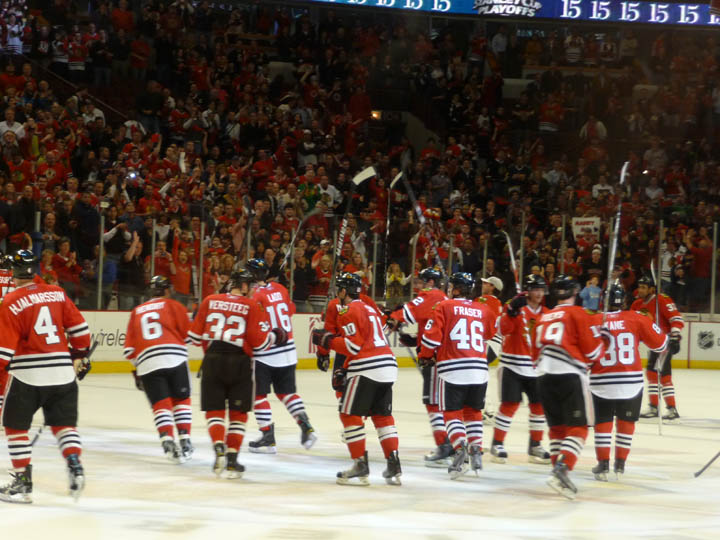 Man, that's the worst thing to see - the billion mph liner right back into the pitcher.

In this case, Tom Gorzelanny's shoulder.

I was just on a plane a week ago, and everybody was watching "The Blind Side". Have you seen the beginning? When they show the Thiesmann leg-break play? It's just flat out the worst thing ever.

So, I see the ball scream back into Gorzy, I gotta leave the room.

Even if it woulda happened to Roy Oswalt, I'd have the same reaction.

And then Gorzy stays in the game - that's a tough kid - for the last out.

Anyway, losing to this year's Astro team is really bad, because the Astros are just bad.

Their best player, Oswalt, shut the Cubs completely down for 7 and leaves with a 4-zip lead. After that the Astros tried as hard as they could to give the W back - the Cubs score 3 in the 8th and in the 9th leave the tying run (Ryan Theriot) at 2nd after the Astros errored him on and wild pitched him to 2nd.

PS: I did something really stupid with my blog. I had an extra feed coming to Cubby Blue, and I thought I could delete it and re-direct the traffic to still come here. Big Mistake. I don't know what actually happened, I just know it didn't re-direct. So if you stopped getting the feed, it's a pain in your ass and I apologize, but I've got to ask you to subscribe again.

"I fought the law and the law won."

Argue balls and strikes and you're gone every time.

But as Aramis Ramirez said (something like) "If D. Lee was arguing about it, it MUSTA been a ball."

More importantly though, the Cubs lose the chance to sweep the Brewers at Wrigley 6 to 8, Big Z begins his good-one-start/not-so-good-the-next pattern, Marlon Byrd hits one to Mars, and Lee hits his 100th homer at Wrigley straight over Jimmy Edmonds' head.

Yeah yeah the bullpen yada yada - we'll be saying that all year.

But I still like the spirit the Cubs are showing in this young season. They were in it. They were fighting for it. I'm liking this team.

It looks like Houston won their first game of the season - so glad that didn't happen at Wrigley - and today it's Carlos Silva (who looked great last time out) vs. Felipe Paulino who went 5 innings and gave up 4 runs vs the Phils his last time out. 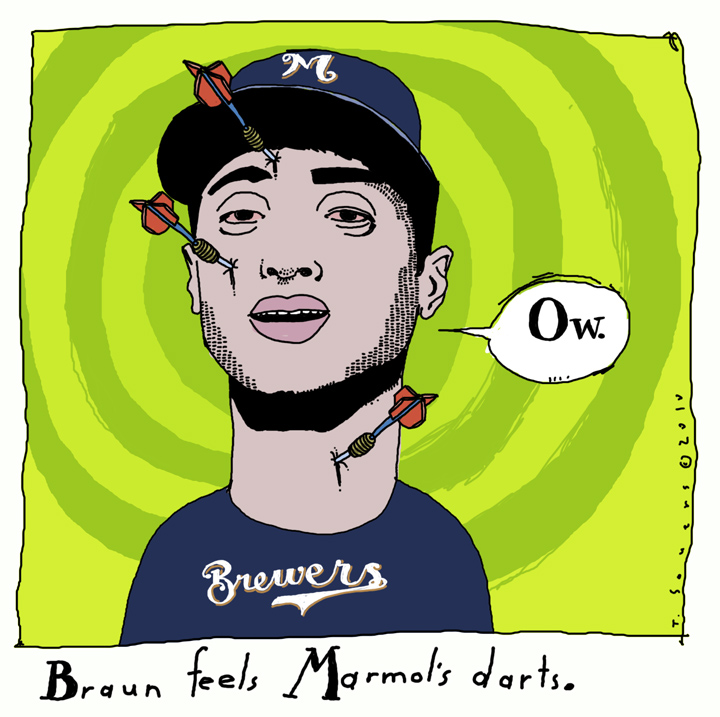 It hasn't been often in the last 11 months that I could do a drawing that wasn't at least semi Cub-depreciating, so it feels pretty good to make fun of somebody else.

HOW ABOUT THEM CUBS?

A lot of good things happened yesterday, but overall I'm hoping the Cubs all looked at each other after the game and thought yeah, that's how you do it.

Remember how that caught on in '08?

I was with Oif and Olson working on an edit, and Olson would check on that stupid computer Game Day thing every once in awhile and announce the depressing score.

Then the 8th Gray comes in and gives up even more runs, and you know, it's the Cubs, right?

Of course they're gonna lose.

The next time we look, Colvin is up and he walks to load the bases, which is when I notice that LaTroy Hawkins is pitching. Seriously, he should just have something in his contract that says "I don't pitch at Wrigley, ever."

So the Colvin walk and then It's Theriot.

Between Oif and Olson there is just so much negative energy spouting forth, and what can I say except "Strike 2." which is what Game Day just said happened.

A single! 2 runs score and the Cubs are... well they HAVEN'T LOST YET! And they're down by only one.

Fukudome's up, and now for sure it's over. Oif, he can't STAND getting his hopes up and then having them dashed. But Fukudome comes thru with a single and the Cubs take the lead and now there are just 3 outs to get.

Oif: "Oh GREAT, here comes Marmol. 2 walks and then Fielder's up. They lose. Bet me."

But now we were finished, and Dave Gerbosi (our editor) puts the game on the monitor, so we got to actually see the 3 devastating Marmol strikeouts of Hart, Braun and Fielder.

And then I looked at Oif and Olson all giddy in the editing suite, and between a couple Cub fans I believe I saw the birth of Cub confidence in 2010.