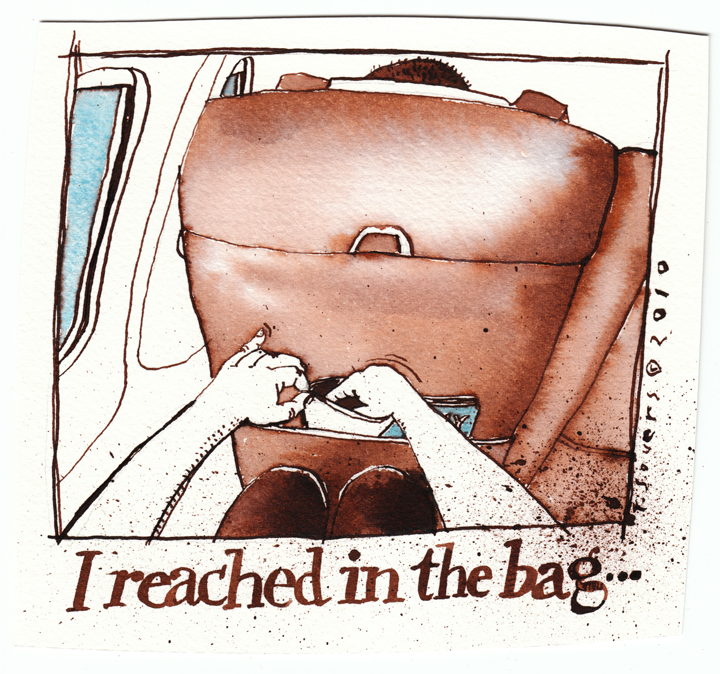 You know my personal goal for this blog is to describe what it feels like to be a fan of the Chicago Cubs.

Well, I found an email I sent to some buddies in Chicago while we were flying around on that big production trip recently, and part of it describes a wonderful little experience I had. It also sort of describes what yesterday's game felt like...

I actually slept for 6 hours straight last night, my body clock is finally adjusted!
Which must mean it’s time for a night shoot followed by back to back 13 hour plane rides!
Back when we left Marrakesh...you know I chew gum all day long, right?
When the flavor’s gone and I’m on a plane, I throw the spent gum into one of those little white airplane throw-up bags.
So I found my throw-up bag, and worked my hand down in there to open it up.
Unfortunately, the guy who sat in my seat on the flight before me was a throw-up bag user too, because SURPRISE! there was a semi-fresh, giant green loogie in there.
I pulled my hand out and it was attached to a loopy string of 3rd World spit-snot.
Shock and reflex made me immediately wipe the hand on the empty seat next to me.

A minute later a flight attendant came by and said, “Why are you crying?”

Well, that's exactly what yesterday's 5-13 loss to the Diamondbacks felt like to me.

Now, it's time to forget that one and just move on, eh?

In praise of Marlon Byrd

Okay, gotta start with that impossible catch in yesterday''s game in the afternoon sun. High fly, too much sun, he turns his back, sticks out is glove and POOF! it lands. Pretty sure if I was a Nat fan, I'd have been disgusted with Marlon Byrd's luck. But I'm not and I wasn't even if it was.

But anyway... QUICK: who was the last Cubs starting center fielder you remember as being an everyday stud? A mainstay guy who roamed out there a couple years at least? Corey Patterson? Juan PIerre? Bob Dernier? Rick Monday? (Although we loved him, Reed Johnson doesn't count because he wasn't really every day.)

Center field for the Cubs, if you think about it, has pretty much been a position where somebody passing through Chicago plays for a season and never makes a real impression on our Cub consciousness. I even found an article on it here.

This year, we may be seeing a guy with a chance to change all that in Marlon, who was the biggest yet sort of a ho-hum pick up for the Cubs this last off-season (the bigger news of course was getting rid of that other guy who went to Seattle).

I don't believe he'll be this good all summer, but so far he's been an unexpected monster.

.333 with 15 RBIs, 9 doubles, 12 runs, 3 homers (he doubled his career best season hr total last year with 20, but we shouldn't expect that again this year). With Aramis Ramirez off to such a rotten, sputtering start, Marlon has looked pretty damn good in the middle of the line-up.

The other night Lou sat him so he could rotate in Tyler Colvin, and Colvin hit one out. Either Len or Bob said later that Marlon was on the top of the dugout steps - the first to congratulate him - and that Marlon had taken him under his wing.

Numbers aside, Marlon is like the Anti-Bradley when it comes to clubhouse stuff.

So... welcome to Chicago, Marlon Byrd, and may you just keep doing what you're doing.

In the not-so-good news yesterday, even with the amazing catch, the Cubs drop their second in a row to the Nats despite Ryan Dempster pitching like a God for 8 innings. That little streak the Cubs had was filled with hits. They need to figure out how to make that happen more.

This afternoon it'll be Ted Lilly with his second start since coming off the dl vs. the Arizona Diamondbacks and Ian Kennedy (0-1, 4.43). 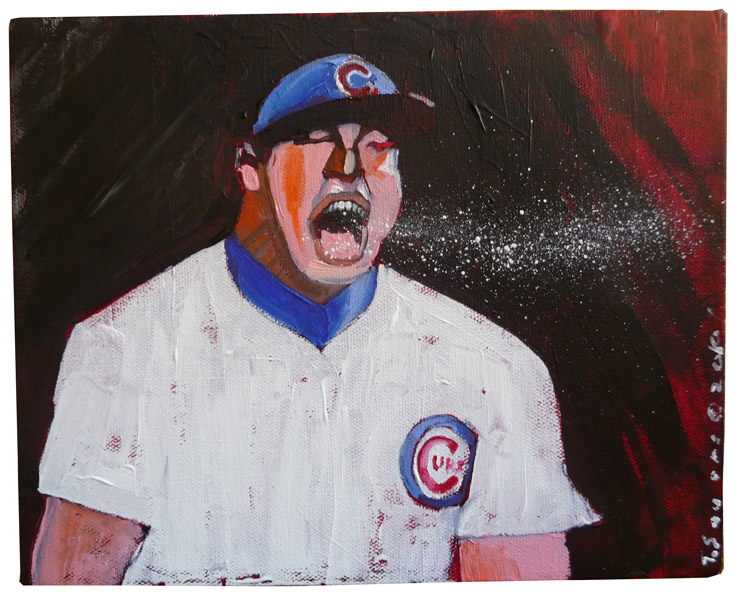 I'm imagining you were as pumped as I was, watching Carlos Zambrano's 7th and 8th inning performance last night.

No, I don't think he stays there all season, but rather until trades become possible and Jim Hendry figures out a way to get an established set-up guy. But lets entertain that thought for just a minute. What if he did stay there?

I read somewhere that he's wasted in the bullpen, getting in way less innings than he would as a starter. But if you think of it as getting him in more games than innings, that logic kinda goes away because it translates into more team wins. When Marmol was the set-up guy and we were all clamoring for him to move to the closer role, I remember Lou saying, "Sometimes you win it in the 7th inning."  And that was Marmol's role then, really. It's just a shame that the only true glory position in the pen is closer, because if there's anything I do know about Big Z, it's that he's got an ego as big as his personality. He's doing this now, but he's not "happy happy" about it (which I think means he's only half-happy).

Listening to the crowd, however, I mean how could you not love coming in late in the game wearing a big cape and saving the day? This season's still just a baby, but already it's all groans when pretty much any bullpen guy comes in before Marmol. And for good reason - except for Sean Marshall they've been pretty dreadful. Berg, Gray... when Grabow comes in I go get a beer and hang out in the kitchen for awhile. Take out the trash or something. Can't stand it.

Right now, any game you go to you might be treated to a Big Z performance like last night. And that's not just good baseball, it's freaking AWESOME.

None of it coulda happened without the bats still showing life and Carlos Silva going 7 strong. He gave up 3 earned runs and his ERA ballooned up to 1.73.

Theriot has been magnificent at the plate and at just... playing the game. Last night he goes 2 for 5 and scores one. The insane short-to-left-back-to-short catch he made early in the game - if you were a Nat and you saw what the wind can do at Wrigley you'd have been freaking out.

Marlon Byrd is hitting .355 (Stats, how good is he really doing anyway with all the modern numbers?), he went 3 for 5, drove one in and scored one. He's been, seriously, the best surprise of the season so far. What a pick up.

Soriano got 3 walks. Kudos to Rudy Jaramillo - Soriano may never have done that before in his whole career.

And lastly, lots of times you think it's an anti-climax when the winning run is walked in like Aramis walked it in last night. But I think it wreaks havoc on the other team's confidence, and I loved it.

Lastly lastly, The Blackhawks win in Nashville and move on to the next round!

The painting is acrylic. Haven't done one of those in awhile. 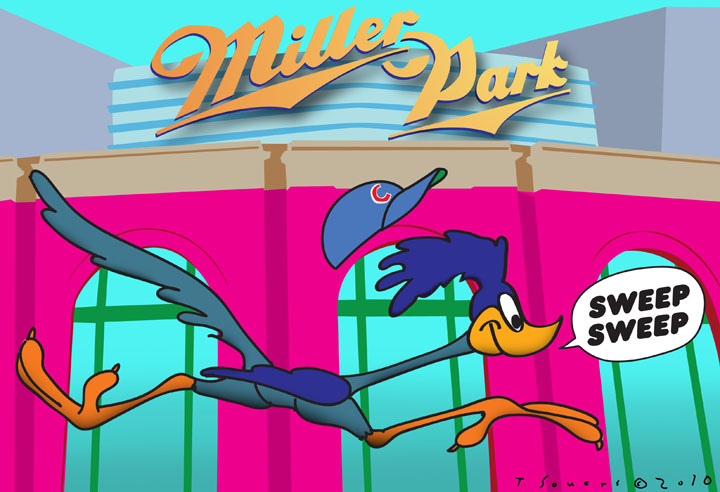 Okay, maybe the vicodin has had some kind of effect on me over the past two days, but do you have any idea how hard it is to come up with a fresh "sweep" illustration?  Granted, sweeps don't come along that often, but still.

I do like the Roadrunner alot though, so well... there you go.

The suddenly hot Chicago Cubs post their first sweep of the season, and it couldn't come at a nicer place than Miller Park in Milwaukee against the suddenly un-hot Brewers.

How's this for bats?

Ryan Theriot goes 5 for 6. Kosuke Fukudome goes 3 for 4 with a homer, double and 2 walks.  Tyler Colvin does the same only with one less walk. 8 RBI's between those three! Geovany Soto goes 2 for 4, drives in 1 scores 2 and raises his average to .366!

Lou Piniella is tinkering daily and right now he's a freaking genius at it as he sat the ultra-hot Marlon Byrd and played Colvin, who did the kind of massive un-rookie-like damage that makes you and me have hope for the present and feel oh so happy.

It was pretty bleak around here just a couple days ago, and now?

Tomorrow the Cubs come home to Wrigley Field to face the Jim Riggleman-led Washington Nats, who have turned out to be sort of respectable so far this year at 10-9.

PS: The movie "We Believe" is finally available for real. This is the one produced by my friends Tim McGuire and Chris Claeys. Please go here to see the preview and to order your copy. 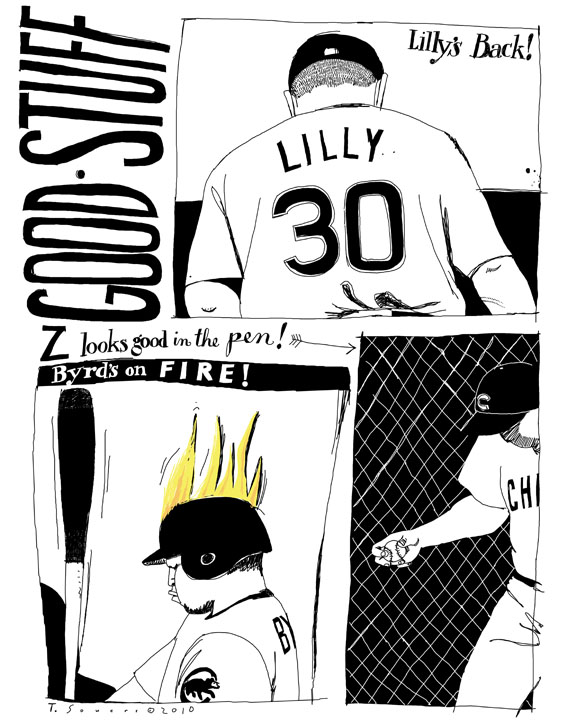 So, just how much good stuff happened in this Saturday night game?

Bob and Len kept saying he looked pretty rusty but godDAMN - he shut out the big bats of the Milwaukee Brewers for 6 innings in his first game back from shoulder surgery! If that's rusty then I'll take rusty. He struck out Prince Fielder 3 times. He finished strong in his last inning with a groundout by Ryan Braun, a backwards K by Prince, and an easy pop fly by Casey McGehee on maybe 7-8 total pitches. Yep, a couple walks earlier but still, he looks like the man with guts the Cubs have been missing.

Marlon Byrd has been hotter than what my root canal feels like right now (I'm sooo about to take another vicadin).

Did you see his slide into home in game 1? Just get the hell out of the way. For some reason, maybe the way he moves or his shape or something...reminds me of Gary Mathews (not the current one but rather "The Sarge" one). Just a big freakin' gamer, that guy. Byrd goes 3 for 5 tonight, and others staying hot would be Theriot and Soto with a couple hits each.

Time will tell, but maaaaybe this Big Z in the bullpen thing is exactly what the team needed. I guess he seemed nonplussed after, but he looked pumped coming in... he's also suddenly like a pretty dangerous pinch hitter coming in late in the game. And if you're the Other Guys, having Carlos Zambrano show up on the 8th inning mound all fresh like that has got to be a hope-dasher.

Except for Xavier Nady leaving the bases loaded and John Grabow slowly turning into this year's Bob Howry, this was just fun to watch and a great game all the way around. Even Alfonso Soriano got a shout-out from Bob Brenly for running out a weak grounder and getting a single out of it. (I know, I know...)

And then I checked the Hawks score online and they pulled out one of those games you just wish you could have been at: a 5-4 overtime W that leaves Nashville a game away from going home.

And THEN, I saw an article about the Bears draft - someone please tell me how in the world the Bears could get publicly blasted for their draft in a year when they weren't even really invited to the table? They only had 5 total picks starting way back at #75.

I forgot about that boob Jerry Angelo!

Oh well, the Cubs just ruled, and maybe with young Randy Wells on the mound we'll see A SWEEP today! 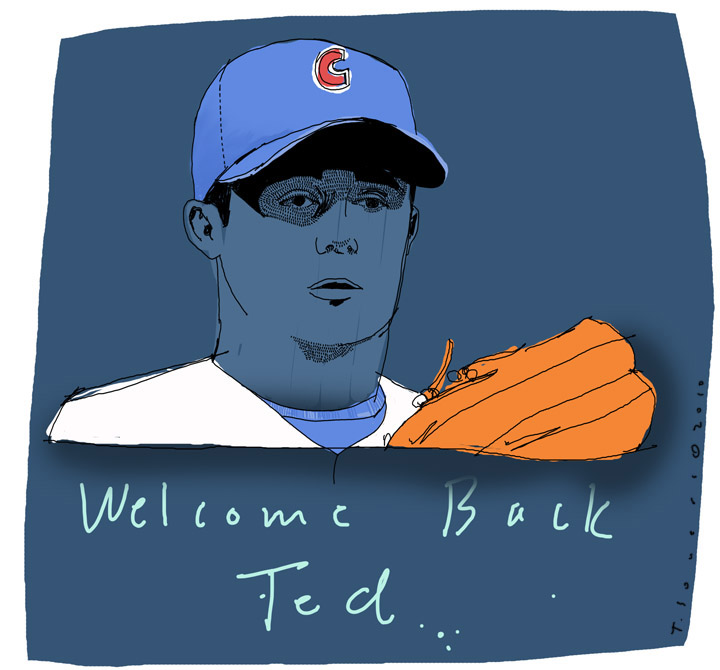 I had a root canal yesterday (they actually happen over the course of a couple dentist visits, and the first one is lots of the worst stuff), and these vicadins aren't allowing me to string any thoughts together.