What to do with a Cardinal hat 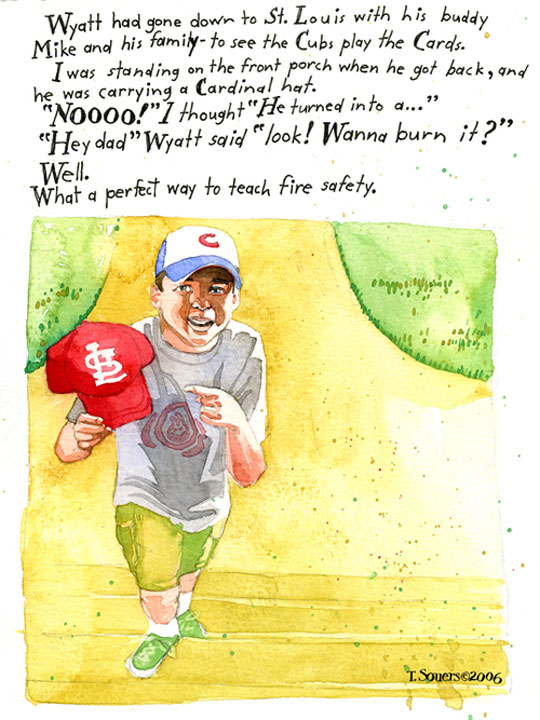 What a good son!

Still on the business trip. Thanks for stopping by even when I'm not in.

Kids Are Welcome At Wrigley Field 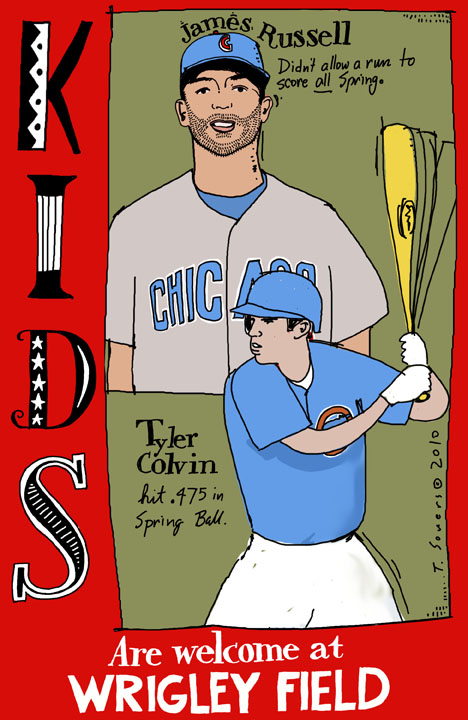 Of all the stuff that happens in Spring ball, to me this is about the most exciting.

Kids who come to Spring Training and all the stars align for them to get their chance at the Bigs.

Justin Berg made it into the bullpen about a week ago.

Esmailian Caridad threw about 19 innings last season and even got a win. He's in the pen as well.

But the real drama was with Tyler Colvin and James Russell.

Think of all the stuff that happened here for James Russell - Jim Hendry didn't pull the trigger on a trade for an experienced bullpen guy, Angel Guzman got injured, guys with more experience and expectations didn't do so well, and Russell threw the ball better than he ever had in his life.

He's the luckiest guy on the team (at least until Hendry makes that trade, which I figure he will).

Imagine having Lou Piniella say of you, "He's not looking for a roster spot. He's looking for somebody's position."

As of right now, he's leading all of baseball with a .468 ST average, he's got 10 more hits (29) than the next leading guy, and the Cubs have played him in 20 games (which means they took a really long hard look at him).

Not bad for a guy who came to camp basically in competition with Sam Fuld as a defensive replacement.

Now, remember it's only Spring Training and of course he's not gonna hit .400. He's not even gonna start but maybe a couple games a week.

But Alfonso Soriano has a history of injury, and even though Lou always gives the big contract guys the benefit of the doubt, this is Tyler Colvin's biggest moment so far. If I'm Lou, I'd get him in sooner rather than later just because he's so hot.

And now there's one spot left for a position guy, and I think it's down to Millar or Tracy or Hoffpauir.

Real baseball starts in Atlanta on April 5th, one week away.

And the home opener on the 12th.

Can't wait, and good luck to The Kids.

Last thing: the guys at VINE LINE finally went online at the Cubs' site, and they put some of my illustrations up there! Go here.

I'm out of here on that crazy business trip again today, back in about a week. Can't wait to tell you some of the stories.

The Cubs get a new chair for Derrek Lee

I don't know about you, but that stupid "Derrek Lee Freak Injury" headline gave me a total heart attack. Then I read the story and it sounds like a bunch a nothin', thank Baseball God.

But there is a ton of stuff going on.

It is amazing to me that Randy Wells is just...an expected starter. I still freak out that the guy was a minor league catcher just about 5 minutes ago.

And what's not amazing is this: all Carlos Silva has to do is throw one single strike and I'll like this team a billion times more than the one with Milton Bradley.

Some kids are probably gonna make it to the Bigs this year. Tyler Colvin, if Lou figures out a way to get him some real playing time. This guy James Russell who I never heard of is most likely in the bullpen.

Maybe they're this year's Randy Wells.

Maybe Gorzellany has found a mentor in Greg Maddux and he smokes 'em til Terrible Ted gets back.

And this D. Lee "back injury" thing? Albert Pujols has a lower-back issue, Yadier Molina's out for the rest of Spring Training with an oblique, Matt Holliday has some "intercostal" issues (muscles between the ribs), Roy Oswalt has a hammy, Dusty can't wait to get at those young Reds arms, yada yada...

Today Xavier Nady makes his first start in the outfield (I think he's not allowed to really throw yet though), and it'll be my first opportunity to catch some live action.

I'm here for another day, then gone for the next week, and hopefully back to close to normal after that.

Remember that time the Cubs swept the Sox? 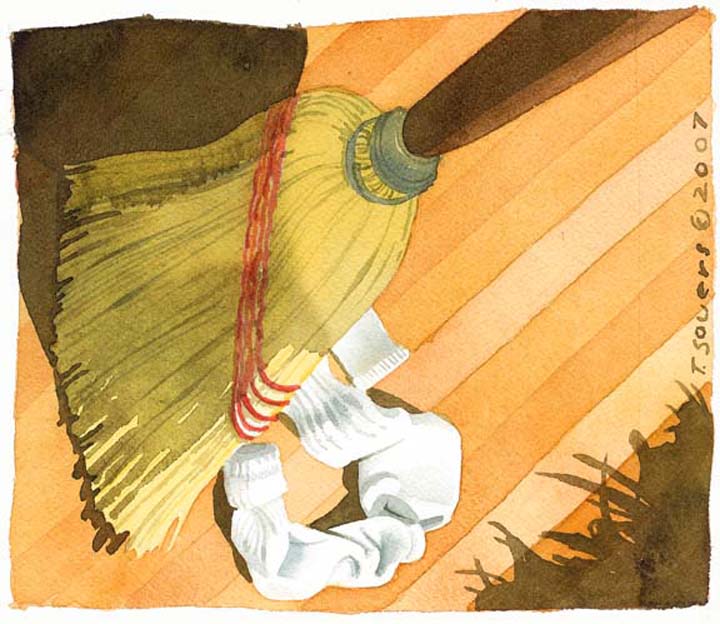 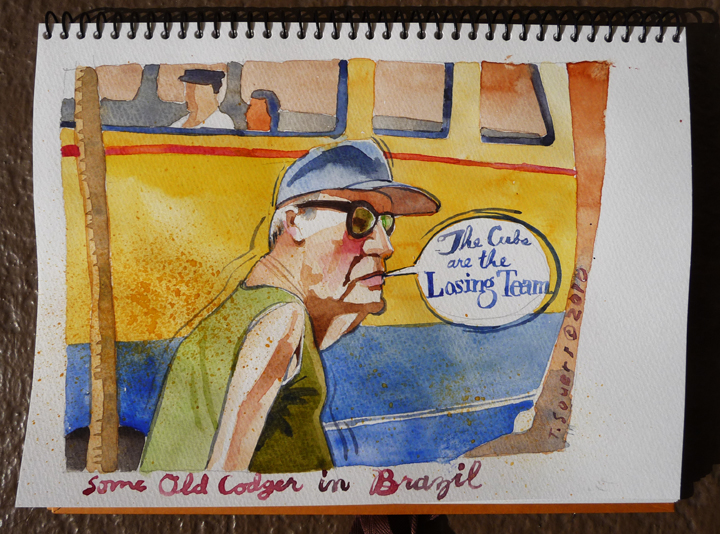 Man, it's exactly like Al Capone and Chicago - you go to another country and say you're from Chicago and invariably the other person will get excited and say, "Chicago! Al Capone! Tommy guns!"

2 weeks ago I was in a Tokyo cab (immaculate btw - frilly doily material on the seats and you could eat off the guy's carpet) with my Cubs hat on. People are real fans over there - baseball is a giant deal. And it's a crowded cab so I'm sitting in the front seat. The driver, he holds his tongue til we're getting out, then he says, "The Cubs lose! All the time lose!"

I had to laugh.

Then the other day in Rio (I know this travel stuff is weird, I'll tell you more sometime later) I was again wearing my Cubs hat and this Old Codger admitted to not really knowing anything about MLB except, "The Cubs are the losing team."

Not that this is anything new to anyone. It's just hilarious and strange to see first hand that the Cubs and losing are internationally linked, probably since the invention of the boat.

So I'm not all the way back yet, but here for a little and then back into this trip.

But I've seen some stuff online.

Angel Guzman, another really sad sad tale of another Cub with never-ending injuries. I thought he finally got past it, and last year he was a quality guy. Pretty sad.

I see Terrible Ted is hauling ass back to full health. Why? BECAUSE HE'S TERRIBLE TED!

I see Starlin Castro got sent down after impressing quite a bit, Ryan Theriot is tearing it up, leading the league in batting with a sick .457 average, and Tyler Colvin is right behind him with 5 more hits at .438.

Mikey Fontenot must be locked in at 2nd for the start of the season hitting about .300 and getting the majority of the starts. What if his left handed bat just hit about .275 and he knocks in a few dingers? He's no all-star but this year he'd be a real asset, a real joy. A guy to root for rather than boo.

Aramis is semi-back from his first injury of '10.

I still haven't seen one second of a Cub game, so I'm pretty much out of the loop.

Let me know what's going on!

Remember when the Brewers sucked in '03? 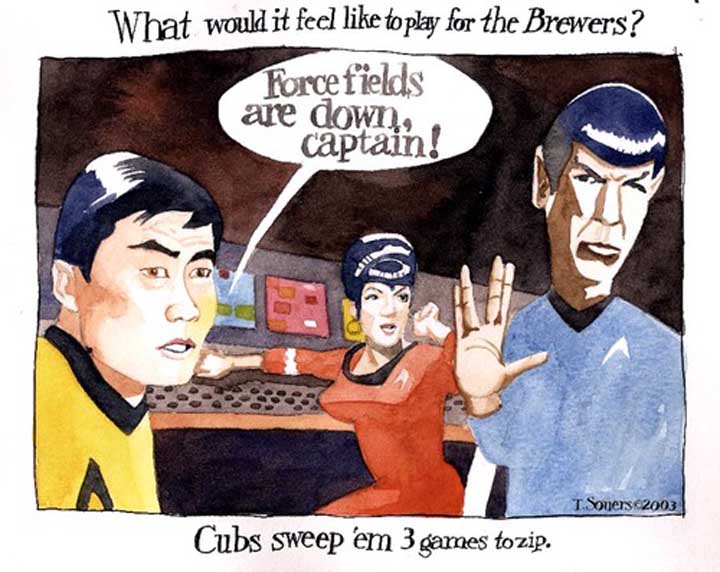 I'm on an extended business trip, so I'm putting up some of my fav older posts while I'm gone. Please keep comments coming as I'm gonna depend on you for what's REALLY going on, and I'll do my best to answer.