NEVER go to the Grocery 3 hours before the Superbowl

There were a MILLION idiots at the Jewel buying chips and salsa and beer for the Superbowl, and they were all in line in front of me. Why?  Well apparently I was one of those idiots too.

I enjoy the diverse population around my hood. My neighbors are from all over the world and white collar and blue collar and politicians and cops and cleaning ladies and cab drivers and construction guys, among other things.

But one thing I HATE is when someone decides that the fastest way for them to get up to the cash register at the grocery store is to pretend they don't understand that there's a line a mile long behind me, the next guy in line.

And so it was with this Old Hag who cut in front of me.

I explained the fact that I'd been waiting for EVER to buy my chips and salsa and beer, but she just turned around like I said nothing.

Maybe she had a problem hearing or something - she was pretty old.

You know that area in front of the cash registers where usually the lines go back maybe a cart or two? And then there's a space between the end of the line and where the aisle starts - that space just big enough for someone with a cart to go by? Lets call that the Common Decency Area. 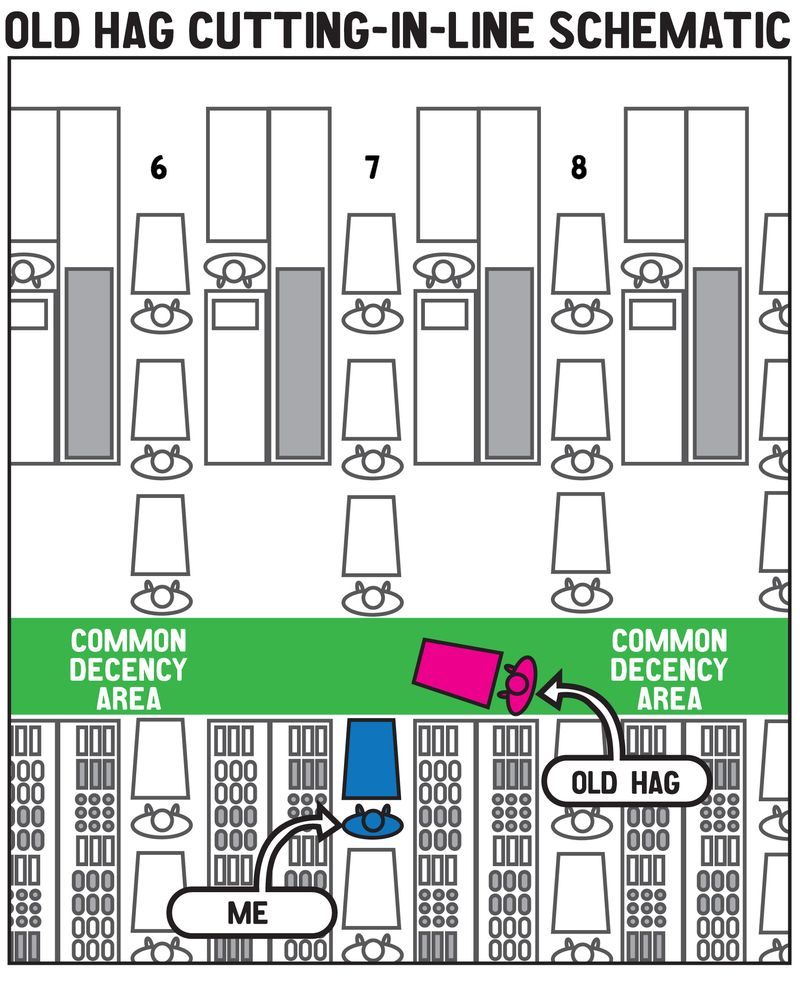 In hindsight, given the extra grocery store pressure from the Bowl, I should have been an asshole and taken over the Common Decency Area. Because had I blocked that area off, maybe the Old Hag wouldn't have thought she could just cut in.

And when the Old Hag cut in front of me, I totally caved.

I stated my case to her and got no response. I looked for help from my spineless fellow line-waiters and got nothin'. They instead pretended it wasn't happening.

But in my head? Man did I ever give it to her.

And one thing for sure, I AM NEVER going to the grocery a couple hours before the Bowl.

Only an idiot would do that.

The Bowl, by the way, was pretty entertaining.

New Orleans' head coach Sean Payton - he sure waited to get on that big stage before pulling out his bag of tricks.

And my chips and salsa were delicious, by the way.

Boy...haven't we ALL been exposed to these, Hmmmm...well there's no other name for them but ASS-IOPATHS

I've come to realize that for many folks (ASSHOLES), slipping into a temporary sociopathetic personality provides a great momentary payoff at very little expense.

Very little expense that is, so long as you genuinely do not care if some stranger thinks you are an ASSHOLE!

Cutting into lines may be the most common form of ASS-IOPATHETIC behavior. But there are others I've observed, to wit:

- At Wrigley Field: Blocking someone's view by standing up to stretch / call a beer vendor / talk to your buddy behind you / get your picture taken, etc., etc. Usually done at some crucial point in the game you're not interested in because you're not really a fan and someone gave you the tickets.

At any decent restaurant: Scream-talking / hyena-laughing to someone next to you at your table so as to demonstrate that you are a cool guy who has no inhibitions and to hell with anyone else who can't hear themselves think. Ditto for pompous public cell-phone users (Aren't I important?!!)

At church: bringing a spoiled, misbehaving, affected devil-child to a place that's supposed to be reserved for solemn worship and quiet reflection. The goal is usually to show the world that you are a wonderful, serene person because baby beelzebub's undisciplined behavior doesn't bother you at all. (And to hell with you if it bothers YOU!)

On the highway: God...where to begin? Our roads are possibly the main venue for "me-firsters". I've driven in places where the use of a turn-signal to change lanes is taken as an invitation to "close-the-gap", risking an accident in an effort to prove total superiority and domination of another less-skilled, inferior drivers. After all, do Jimmie Johnson or Jeff Gordon make a hole for an opponent who needs some space? Shove 'em into the wall!!!

I could go on and on (and so could the rest of you here, I bet). But the point that Tim made is that the key to pulling off an ASS-IOPATHIC move requires the ability to act totally innocent and unaware of what someone is upset about when you're challenged.

If you're complaining, it must be YOU who's demonstrating uncivil behavior!

(If you hadn't guessed, I complain.)

Anybody that cannot respect the CDA should be quartered by shopping carts and disposed of in the freezer section, whether they are an old hag or a young hag.

Yep, that was me, at the store, last minute.

I always try to be "nice" but its people like her that make my evil side come out.

Assiopath?
I think that may work it's way into a conversation or two, Bud.
That woulda been pretty funny to call the Old Hag right then in line.

CFIM! Howdy there. I like the quick dispatching of punishment here. Please talk to my alderman asap.

Hi Maria,
I'm the nicest guy in the world.
But if this lady woulda slipped on a banana peel in front of me and bled alot out of her head, I probably wouldn't have minded...