Yes, it was a wonderful Happy Pitchers and Catchers Report Day.

But now I want more.

It'll be a dozen more days til that first Spring Training game against the A's on March 4th.

That'll be a dozen more days of me with the nervous twitches, the anxiety, the anticipation.

What are you guys doing to pass the time?

You gettin' out the charcoal and firing up that grill? Have you taken the opportunity to get outside with that freshly shaken martini and flip off the sky when the snow starts falling? Maybe I'm gonna have to remind you in a day or so, which is a nice little segue...

I've got a big business trip starting tomorrow that's gonna last well into April. It'll involve alot of jet lag, and I'm unsure about posting as often as normal. So I pre-scheduled a bunch of old favs to come up each day just in case I can't get here.

Please please please keep the conversation going, before long I will have figured out how to comment from my i-phone even.

The other day my daughter came in and gave me this little 3" tall furry blue thing she made with the kind of twisted face that makes me a proud parent.

So I'm taking it along with me, of course. 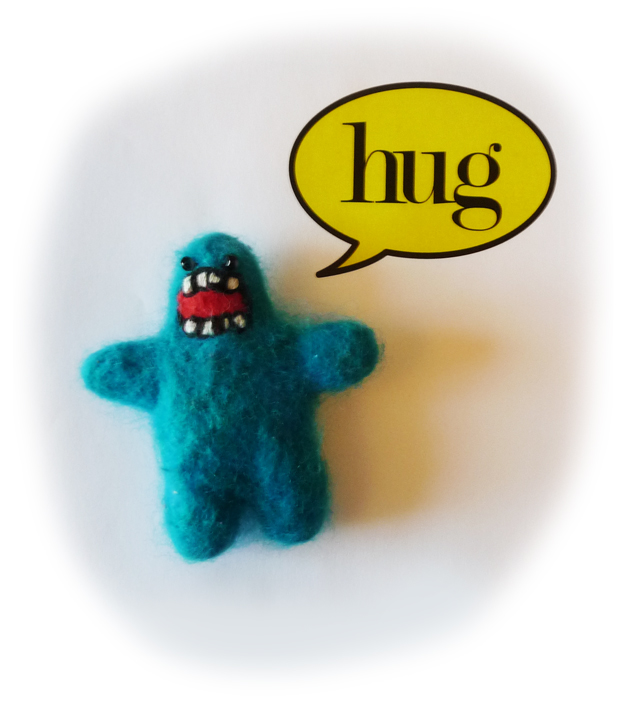 In the meantime, GO CUBS.

Man when it comes to this, when management thinks a player is worth A, and the player thinks he's worth B, and neither side will budge any more, and you know ugly things are going to be said in the actual arbitration hearing... what's the shame in just flippin' a freaking coin?

That way you could televise it.

It would last about the same amount of time as the Kentucky Derby, and all us bloggers and fans would have something fresh to talk about when there's nothing going on except Big Z's hair and the promise of pie-in-the-face hilarity from Kevin Millar.

It could take place on a pitching mound made of the money the player would either win or lose, and there'd be a Brinks Truck or two and armed guards in tuxes...

On the jumbo-tron they could show highlights (and low-lights) of the player's career.

You could have guest coin-flippers so if it was a V.I.P. type player like A-Rod or somebody you'd see maybe Beyonce or George Clooney flip. Or if you're Ryan Theriot it might be Alex Trebek or The Who, but still... it would make for MUST-see tv.

And when it was over, Ryan could shake hands with Jim Hendry and there'd really be no hard feelings.

He'd go join the rest of the team, try his hand at being the next scrappy lead off guy.

Ahhh, just a buncha yakkin' going on here today, but I do believe when it gets to this point a coin toss would do the job just as well and nobody gets their nose bent out of joint.

I guess we'll find out about The Riot's contract later today.

Had the major breath-holding going on yesterday waiting to hear about Terrible Ted's knee. So it's nothing but I REALLY hope they watch him carefully as he comes back. Ted's said all the right stuff about not coming back too soon, but he's the kinda competitor who wants to get back out there NOW.

And I do like the fact that Carlos didn't show up with golden hair or whatever. It's a good year to get down to business.

Lastly, I'd like you all to note that I didn't stoop to doing a Tiger Woods boner joke. 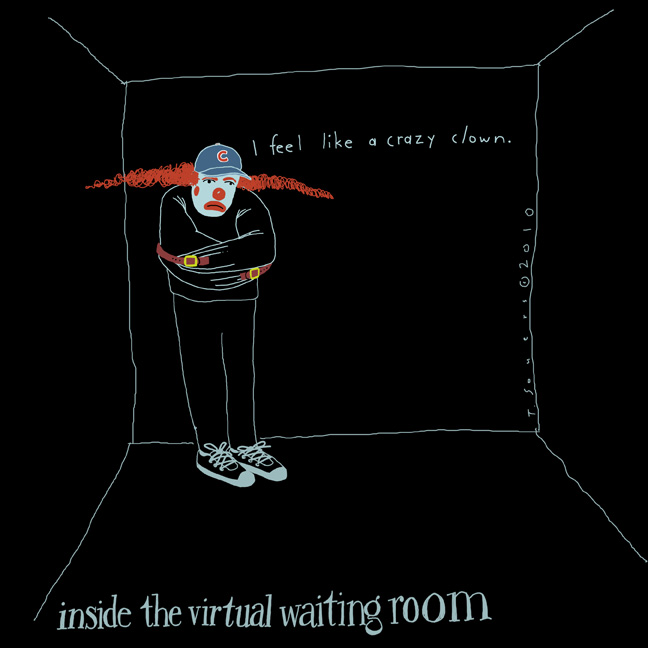 I'm not doing it this year, thank you.

I tried it a couple times before, and it's never pleasant.

You get a certain rush when you successfully get into the virtual waiting room - it's like some kind of victory. You try not to think that there are maybe 50 million people waiting in that same room with you. But then hours go by, and you realize the only person in the room is you: the Crazy Clown.

I actually got some tix in 2008. That was hours of my life just to get a couple bleacher seats on a weekday.

I also know one time I had the flu - a giant fever - and couldn't sleep. I got into the virtual waiting room about 3 am and got right in to where the schedule shows up and you can actually buy something. Thought I was hallucinating. In the morning I didn't even really remember buying anything. Thank God they send you a confirmation email!

Unfortunately my wife found it.

That was a fun conversation.

Anyway the odd thing about this "crazy" drawing is, as I was doing it, an ad came on tv saying that you can get tix to Marty Scorsese's "Shutter Island" starting tomorrow too!

Have you seen the preview?

Just like the virtual waiting room - it's TOTALLY insane!

So if you're feeling kinda crazy tomorrow and want to go spend a couple hours in a dark room, you have a choice.

I'd recommend the theatre.

ps: I read "Shutter Island". It's by Dennis Lehane. Since then I've read 4 other books of his. Can't say enough good things about that guy. 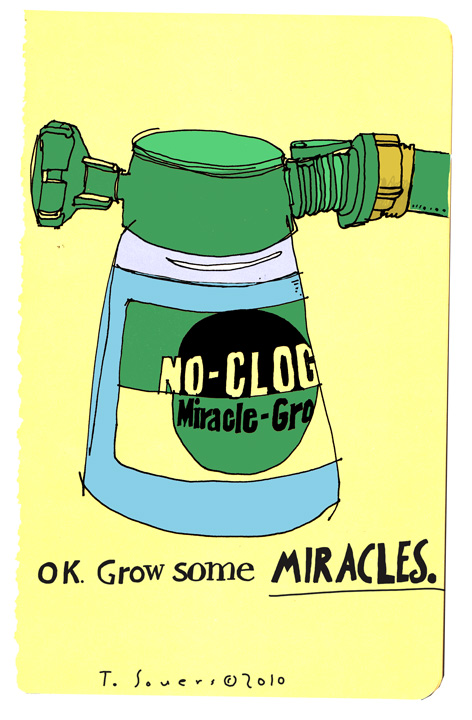 PITCHERS AND CATCHERS ARE REPORTING TODAY!

SPRING IS JUST AROUND THE CORNER!

What are you gonna plant for us this year, Lou?

Certainly not another weed patch we had to watch grow in 2009.

I'm expecting a little more than marigolds and radishes and your basic petunias.

Something more imaginative than impatiens or daisies.

Right now it's time to get down and work that soil so the roots can take hold, and once the sprouts come up keep that Miracle Gro coming, because in 2010 that's what it's gonna take.

But I don't mean to downplay how awesome today is - HAPPY PITCHERS AND CATCHERS REPORT DAY!!!

Hi. It's me. Still slowly losing it as I wait for baseball to start.

I mean, I'm excited for the Olympics, I truly am. Lindsey Vonn is awesome. I hope that one female snowboarder who fell when she was showboating at the last Olympics and lost the gold, I hope she wins and has the opportunity to not be a hot dog. Shani Davis, Shaun White - The Flying Tomato or whatever he's asking us to call him now, those guys are all cool. I'm pulling for the Canadians in hockey because it's their sport and they've got 3 Blackhawks. Speaking of which, I'm excited for the Hawks. The goalie situation is just crazy, but the team is so fun to watch.

But I'm going nuts waiting for baseball to start. I got a cuppa joe to go this morning from a 7-11 and totally burned the roof of my mouth and didn't notice until just now. Went to see Jeff Bridges in "Crazy Heart" and caught myself checking MLB Rumors right in the middle of the big emotional scene where he's at the door and she won't let him in (that's not giving anything away). Took the dogs for a walk and forgot the poop baggies. There were people across the way so I totally acted like I pulled a baggie out of my back pocket, leaned down and pretended to pick up poop.

And, you know, it's not like anything really happens when pitchers and catchers report. It's almost stupid. There'll be some video of guys walking with duffle bags, probably a shot of Lou saying something he's said a billion times like, "We tried left handed. It didn't work." And maybe pictures in the paper of guys stretching on some green grass... or playing catch...

Have some Cubs Valentine's Day Candy

I say lets have some candy today since everywhere I look is pretty gloomy.

What was last year except a bunch of injuries, bad results and an overall unlikeable team led by that prick Milton Bradley? I don't want to dwell on him, but man did that guy ever put a whole team on his back and carry them to the promised land of loathing.

So my first piece of candy is simply that he's long gone.

My next piece of candy is the opposite of the first. Probably the most likable Cub isn't gregarious or outgoing or any of that really. We love Ted Lilly because he's all business, and I can guarantee you that right at this moment there isn't a single Cub working harder.

I'm choosing lack of injury as my next piece. Baseball Gods be damned, injuries even out. 2003 had Corey Patterson's knee, but otherwise nothing really stands out injury-wise. 2004 was a giant disaster with Wood and Prior going down. 2008? I think there was an Alfonso leg-tweak or something, but pretty much the Cubs were invincible. 2009? Mother of God what a mess.

Next is that green heart there, the 4th piece, which would be our new owners. It cracks me UP how people are trying to rush to judgement already. They're babies, infant owners. Have a little optimism! I can't imagine what it's like, how fast things must be moving for them. But somewhere in the back of my brain for no reason at all, I think they'll settle in a little bit as the season goes along. Get a little comfy and maybe around July give Jim Hendry a little wiggle room to do some of the stuff that didn't happen in the off-season.

The last one, the blue one? That's the one we save for 3 days. Big Z is already there, but there's nothing sweeter than pitchers and catchers reporting when you're looking outside at piles of snow next to the shoveled sidewalks.