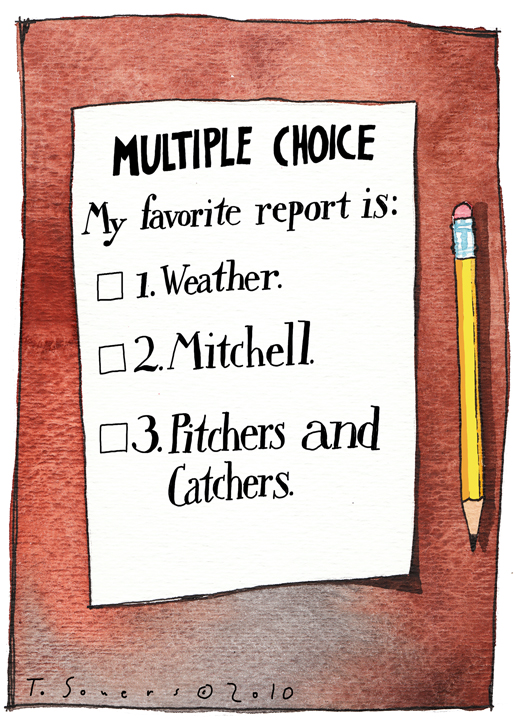 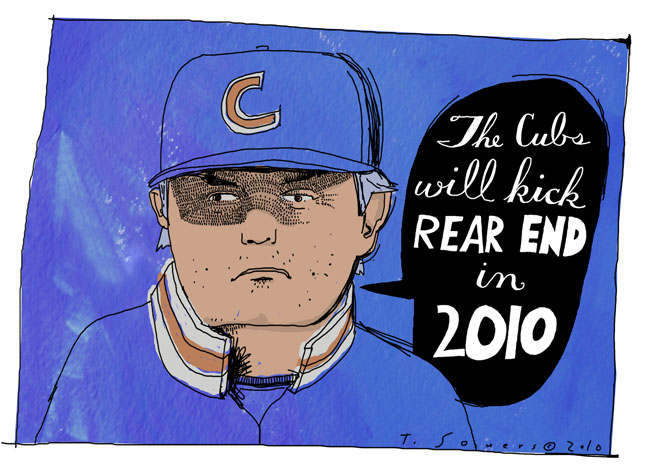 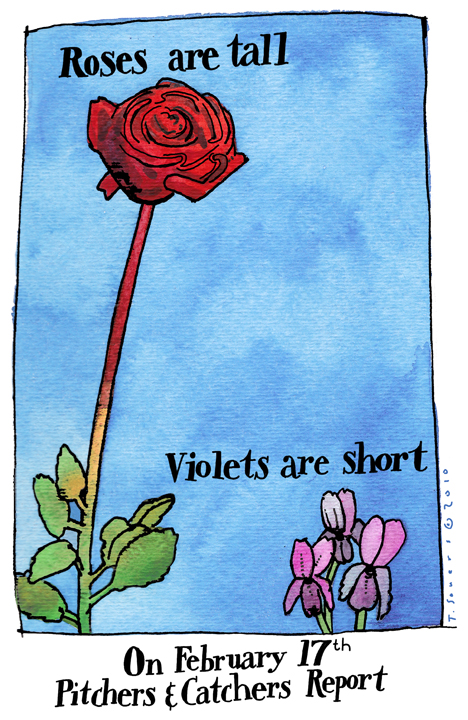 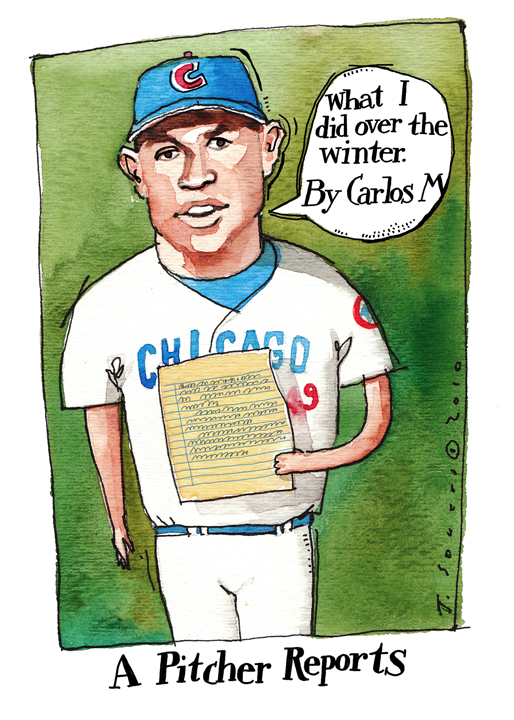 Yeah these are pretty stupid, but the prospect of Cubs pitchers and catchers reporting in just 17 days has got me a little stupid with excitement.

You may recall last year I made up some Happy Pitchers and Catchers Day faux Valentine's Day cards, since that's when Cubs pitchers and catchers reported. And this year my feelings remain the same: that Happy Pitchers And Catchers Report Day is way more deserving of a card than Valentine's Day. So I made a couple more cards with the Spring Spirit for your Cub Buds, even if the Big Day isn't til February 17th.

They're here in the blog for you to print out, but my understanding last year was that they were A) late, B) a little untrustworthy with the print size and C) cumbersome with the cutting and folding and all that. So this year I also put them on Zazzle if you'd like to order them for real.

That's right, real cards on real card stock. So while the subject matter is more Cub-like, these cards are just like Hallmark cards - they even come with envelopes. So... should you feel the yearning to share your own enthusiasm for the upcoming PItchers And Catchers Report Holiday, it's early enough for you to actually sign them, put a stamp on them and mail them to your other favorite Cub Fans.

Plus, if I sell about 13 million of them, I can retire. So tell your friends.

Okay what else... Reed Johnson is now rumored to be maybe becoming a Dodger. 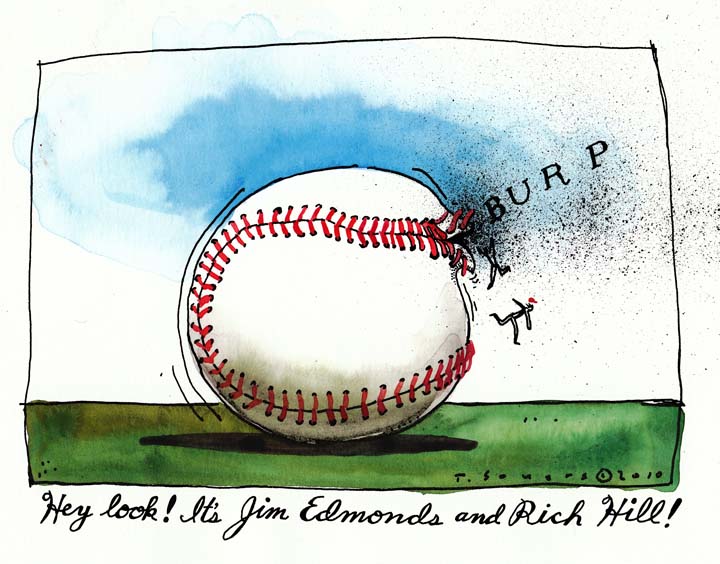 There are only so many guys in the world with the talent to play in the Bigs.

Otherwise every team would be filled with a bunch of new rookies each year, and there'd be alot more MLB retirees - players who were discarded because they were injured or old or named Aaron Miles.

Because of this general lack of talent in the world, baseball has developed a survival instinct where it tells itself it better regurgitate up some spent players or it won't be able to fill out all the teams.

And it would die.

I'm pretty sure there are mammals in the wild who toss their cookies and chow it right back down to survive - it's the same kind of thing.

Edmonds lost his youth and wants to be the backup outfielder, Hill lost his control and had labrum surgery, and wants to be the 5th starter, but both these guys are relatively cheap and each have what gm's call an "upside". If they do well then great, and if not who cares?

Edmonds will be driven because he's 18 homers this side of 400.

Hill will be driven (he hopes) not crazy trying to get his giant hook over the plate.

And what it means in the Cubs Universe of course is that Edmonds will be in the lineup somewhere down the line and kill the Cubs in a game or two, and Rich Hill will find his marbles with Dave Duncan, the best pitching coach in baseball. He'll probably win 18 games this year.

Baseball also upchucked Xavier Nady (2 Tommy John surgeries) and Chad Tracy (knee surgery), and the Cubs are currently lapping them back up (well, the Nady deal won't be signed until he passes a physical).

Seriously, this is almost like watching a nature show.

Okay, and the Andre Dawson hat thing. Those guys in the HOF committee... over the years you just can't come to any conclusion other than they're a roomful of hateful boobs. I refuse to let them get me down with this minor detail. At least they got the right guy.

I think we have to say goodbye to Reed Johnson.

With the signing of Xavier Nady almost done, we probably have to face up to the fact that there won't mathematically be any room on the team for one of the most popular Chicago Cubs in recent memory, our Reed Johnson.

When I heard the Nady news, I sent out an email asking for insight on the guy, but Sutter sent one back saying simply, "Say goodbye to Reed."

So that's the emotional news for the day.

The other news you just have to scratch your head about is Ben Sheets getting TEN MILLION dollars (plus performance bonuses) for one year of pitching for the A's based on an "impressive" workout he had with a number of teams watching. The last time I saw him he was pretty impressive too, then he went on the dl for 2 years.

Anyway, here's a retrospective on Reed, and I hope he lands somewhere and kicks ass. The catch that made him an instant favorite. 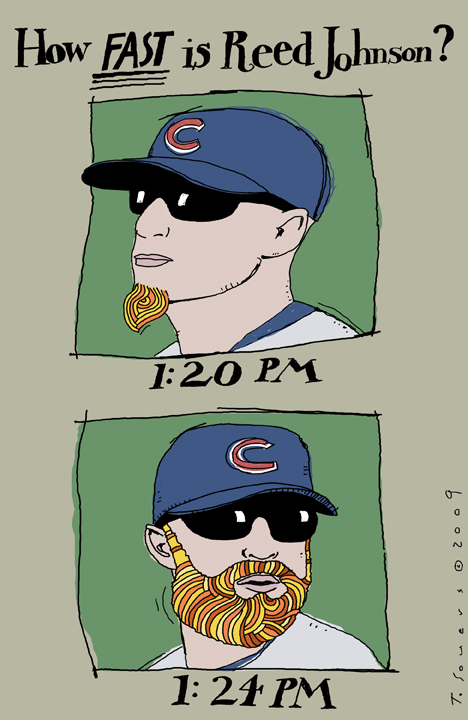 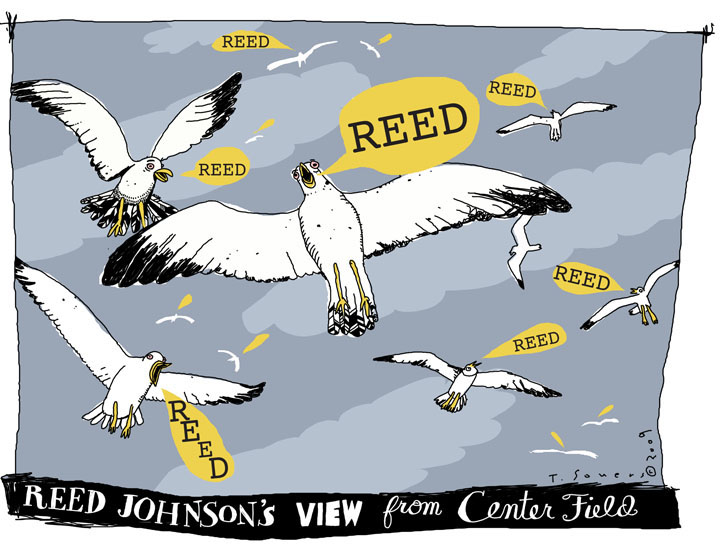 Just another one of the things Reed had to overcome at Wrigley: seagulls. 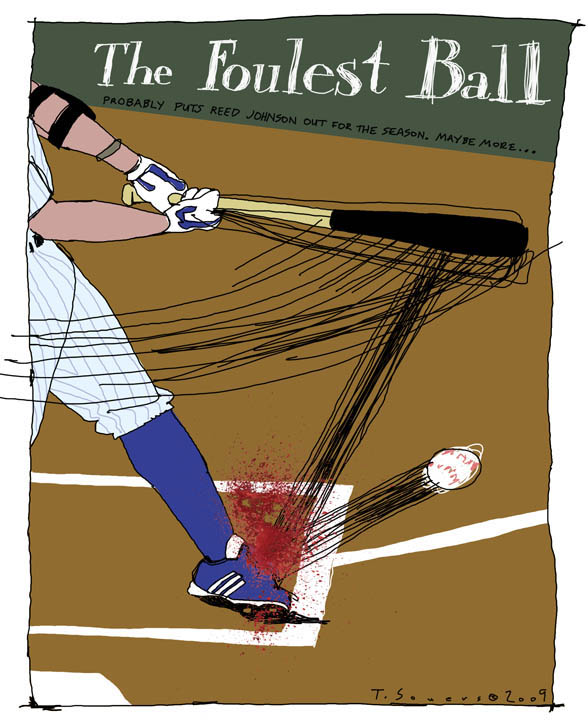 Breaking his foot on a foul ball last year. 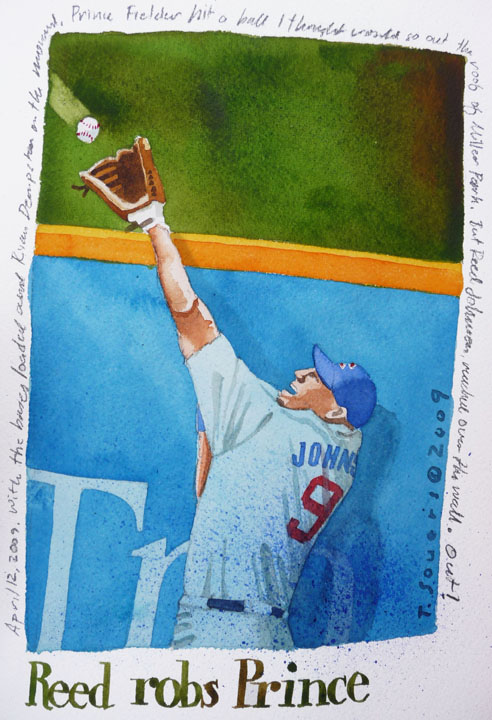 And finally, robbing Prince Fielder of a homer last year.

Cubs Downloadable Schedule - like a new bag of Oreos. 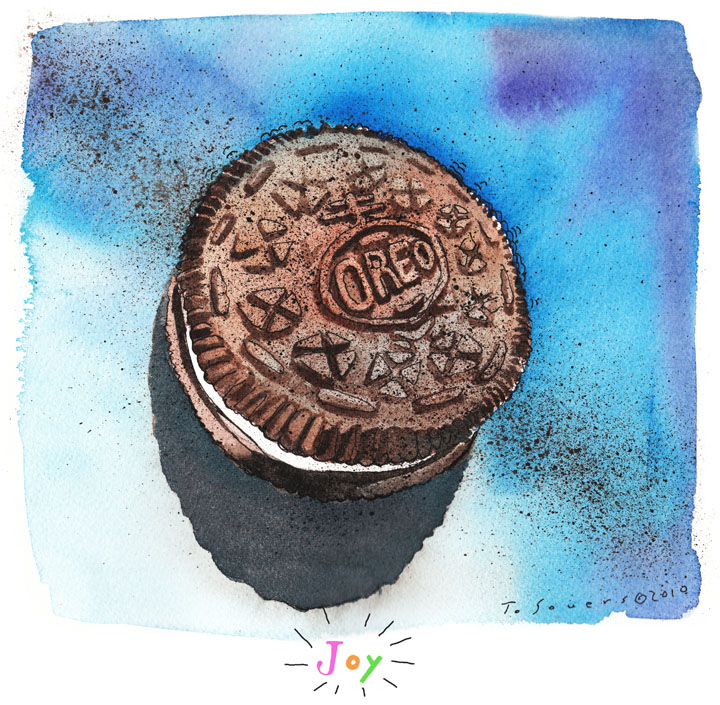 You know, it hasn't been a particularly awful winter so far. We had the nice big snow, it was super cold for awhile. We just thawed and maybe that little circle will repeat itself a couple more times.

But still, winter is generally sucky. The sky, it's the color of bad breath. And that... stuff that's next to the gutters and my garage that used to be snow but got mixed with ice melt and rotten leaves and little black bits of my tires - that stuff never ever ceases to depress me.

So yesterday I'm looking at Cubs.com, and there are some words there I hadn't seen before: "2010 Downloadable Schedule".

Probably it's been there for a month, but Praise Be To The Baseball Gods Above! I believe I'm smiling out loud for the first time in a month.

Surely you have a calendar program on your computer somewhere, right?

Do yourself a favor and get your schedule RIGHT NOW!

It's alot like seeing this new bag of Oreos, which my wife apparently hid in the bread drawer and Wyatt just found.

Yeah yeah the milk-dipping thing and all that, but seriously, opening your calendar and seeing all those games? They're all fresh and crisp and real and haven't been raided by anybody yet?

Makes me say, "Oh yeahhhh" in my deepest voice.

Of course, we've still got a ways to go til we can actually sample the product, but hell.

Okay, what else? The Cubs are maybe after 37 year old middle reliever/not-so-good starter Chan Ho Park who looked good and bad for the Phils in the playoffs last year. And I would imagine that the Cubs seeming to drop out of the Ben Sheets competition would be due to you and me not being able to stomach watching a guy doing that towel drill for big dollars ever again. 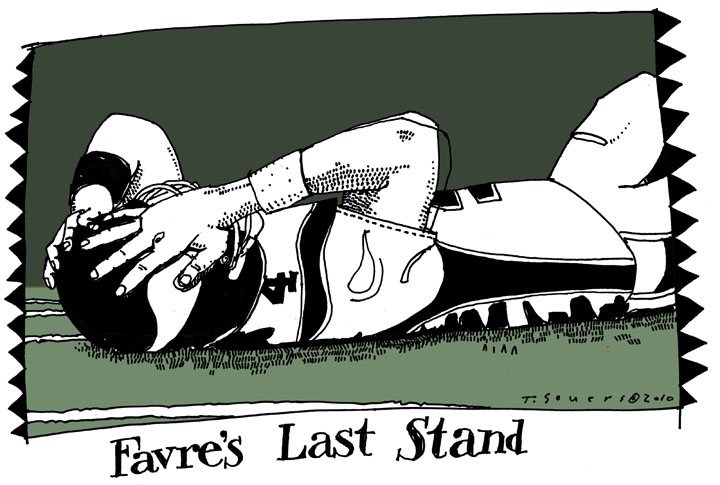 Man, that game was ugly for about a hundred reasons.

But I couldn't not watch.

If Adrian Peterson hadn't fumbled and the Vikings had instead scored at the end of the first half, I figure it's a vastly different game - in retrospect that coulda been the play of the game. (I also think that instead of falling apart after that, Peterson held it together really well.)

Favre had the living crap beat out of him, and you and I both saw the lane to the first down at the end of half #2. He didn't have that far to run. An easy kick. Victory.

But the guy's easily a hundred in football years, he was obviously tired and had the gimpy leg, so whatever.

His next awful pass back across the middle that was intercepted... I don' t know. You guys think he comes back again next year?

It's gotta be like climbing the biggest mountain in the world, getting to the front door of the Super Bowl.

Myself, I think we might have seen his last pass.

Which would mean Favre's Last Stand pretty much happened On His Back.

Either Troy Aikman or Joe Buck awkwardly said after the interception something like, "Favre will be thinking about that pass... maybe... for the rest of... his life."

They didn't say "off season".

But then again, we all have thought Favre was done a bunch of times already.

Anyway, ought to be a good Bowl.

Why Mark McGwire is good for the Cubs.

You know, I'm all for helping a dude out, even if he's a deluded, selfish, thieving, lying turd.

But Tony LaRussa's compassionate hiring of Mark McGwire might be the greatest thing he's ever done.

Because Mark McGwire is at least a Milton Bradley-sized distraction for the Cards.

I spent about 15 minutes coming up with what fans might be yelling at the ballpark, and I'm NOWHERE NEAR as creative as some of the people I've heard there.

After McGwire's just plain stupid performance in the Bob Costas interview, I don't see how he won't become the Conan O'Brien of the coaching world, and by that I don't mean funny. I mean he'll be looking for another job way sooner than he imagined.

In the meantime, I hope people keep piling on the current holder of Major League Baseball's most sacred record.

In today's Chicago Tribune, Phil Rogers has some damning yet awesome quotes from some unexpected people: former Cardinal manager Whitey Herzog and some serious St. Louis royalty - Adolphus A. Busch IV. You can also read about it in the St. Louis Post Dispatch.

I expect the McGuire-bashing, but Mr. Busch also takes a pretty good swipe at Bud Selig - "Mark McGwire chose to take performance-enhancing drugs 9 of his 18 years in professional baseball...He was paid millions while perpetrating a fraud. So how is it MLB Commissioner Bud Selig gives him a pass and welcomes McGwire back to the very game he betrayed?"

When this kind back-splash gets all over the Commish's shoes, one would imagine some kind of clean-up is in order. Maybe this is the thing that finally makes Bud find his spine and do something decisive about steroid guys.

That said, I sure hope McGwire's still around on May 28th when the Cards come to town.

How awesome would it be to hear 39,000 fans yelling "McGwire McGwire pants on fire..."?