A look behind the Cubs 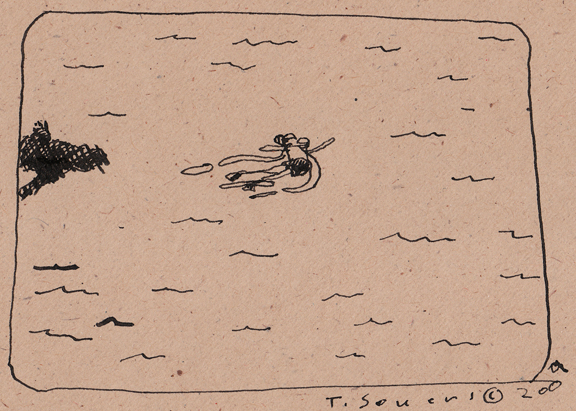 I found an old photo from the first time I went to Jamaica way back when. It’s taken from above up on a cliff, and I’m in about 20 feet of ocean, snorkeling for the first time in my life. (Of course I lost it somewhere last night, so I did this stupid little drawing.)

That’s so I have a clear view of any sharks coming up from behind who wanna eat my legs.

Seriously, when it comes to me and the ocean, that’s my technique: a never ending twist so I can scan behind me.

I first saw it in high school at a drive-in on a summer night in Belleville, IL.

One minute I was sitting on the hood of a car thinking about how in the world I might kiss that one girl with the long brown hair.

And then... that music came out of that dangling, tinny speaker and the pretty, soft naked woman was swimming and the legs are kicking and the camera coming up from below…

2 hours later the world was different.

I didn't kiss anybody.

Because I am not kidding about sharks – there is no more terrifying thing in the world.

I can’t even make up a metaphor for that fear.

And that first time snorkeling?

There was a shark behind me, and he was gigantic.

We’ll get to that in a minute.

First, lets talk about the Cubs.

I just wanted to look behind them for that shark.

It ain’t the Pirates.

I think the Brewers might have gotten a mini-Milton in our old friend LaTroy Hawkins.

You think Dusty’s sort of ruined those arms?

Aaron Harang was apparently this close to going to the Dodgers, poor guy.

Right now I’d say the Cubs ought to feel not so bad, at least about the Central.

Now, compared to the rest of the NL, the Central can't even hope for shark status - more like blowfish.

I’m snorkeling with this guy Steve, the boyfriend of my girlfriend’s girlfriend.

Steve is a great guy who wears glasses with really thick lenses, which he can’t wear under his mask.

He's snorkeling blind, in other words.

So it’s my responsibility to watch out for the big shark for both of us.

We’re in an area called “The Cliffs” in Negril, so called because there are no beaches on this part of the island. 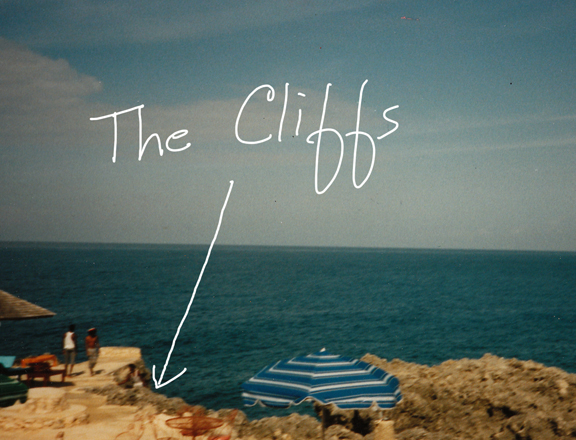 You climb down a 3rd World ladder into the water. Right when you get in it’s about 20’ deep with the ocean going out one way and a wall of jagged black rocks with the waves crashing back the other.

My theory here is that if I can see what’s about to eat me, well, I’d be okay with that. So snorkeling is kind of okay.

Because of "Jaws", I absolutely can NOT swim on the top of deep water without being able to see below me.

My legs involuntarily kick at their full speed so I pop up out of the water like a peeing dolphin – it’s embarrassing.

So there I am, behind Steve trying to be cool while corkscrewing around to look behind me.

And there it is: SHARK!

Gigantic and dark and not looking at me sideways.

It’s swimming right at me.

If you put both your hands over your mouth (like you’re about to sneeze) and scream as loud as you can, you can replicate the noise that I made, only without all the bubbles.

I grabbed Steve’s leg while making that noise.

We popped our heads out of the water and I made that noise in open air.

Then Steve said, “What the hell, man?”

And I pointed to the shark and urgently informed him that we needed to immediately get out of the water.

His point of view was that the cliff was about 30 feet straight up and the rocks would cut us silly.

The whole time we’re having this conversation, maybe 9 seconds, I’ve got my snorkel out but still have my mask on and I’m alternating looking at the shark from under water and from above the water.

It’s now about 15 feet from us, but now it’s moving very slowly.

In fact, did it stop?

It’s kinda just hovering there, and I can see that while it’s really a fat shark under water, it’s not a very long shark from above.

Steve goes, “Are you sure that’s a shark?”

And then I notice a strange yellow thing coming off the side of the shark.

It’s… a yellow piece of plastic!

The kind you find in the seam at the top of… a garbage bag.

Now, there’s really no way to recover your manhood after that, right?

But at least I’m man enough to tell the story.

I got out of the water, had some rum.

Here's a sketchbook from one of those Jamaica trips. The subject is Drumville Cove, where we were staying. 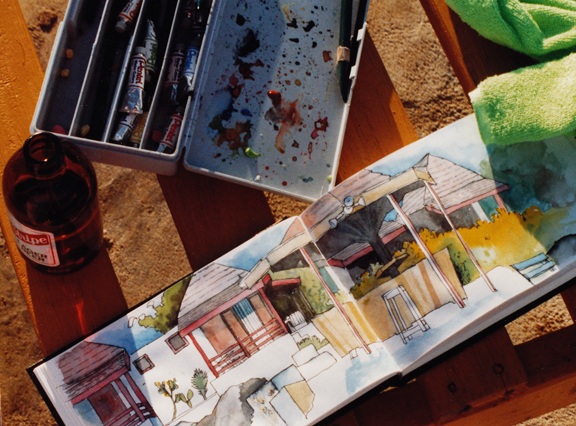 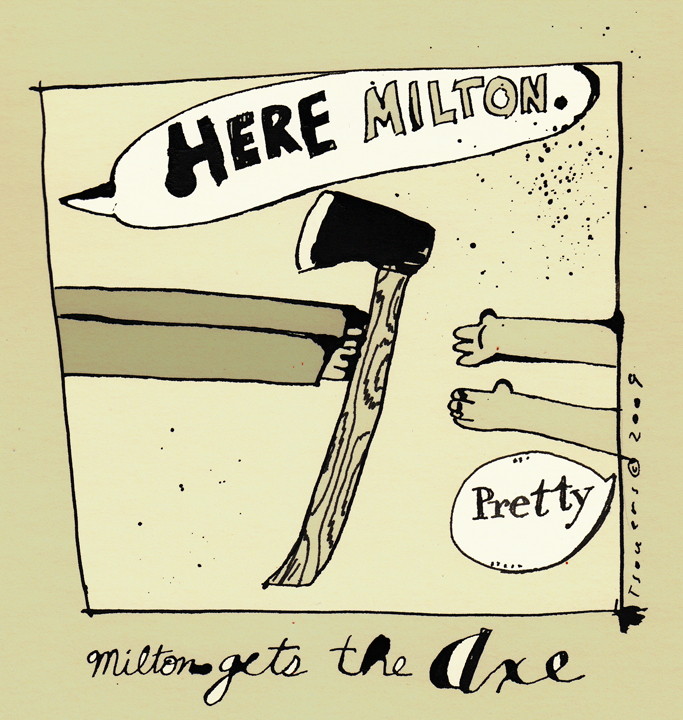 He goes to the Seattle Mariners for pitcher Carlos Silva.

If I hadn't gone to our Holiday party last night I'd totally be celebrating, but uh, that's not gonna happen. In fact, nobody's allowed to make any sudden loud noises around me today.

I've heard that Carlos' numbers aren't so good, that he's owed $24 mil over the next two years, that Seattle threw in $6 mil, and none of that means anything to me at all.

Geovany Soto is in the dictionary under "sophomore slump" 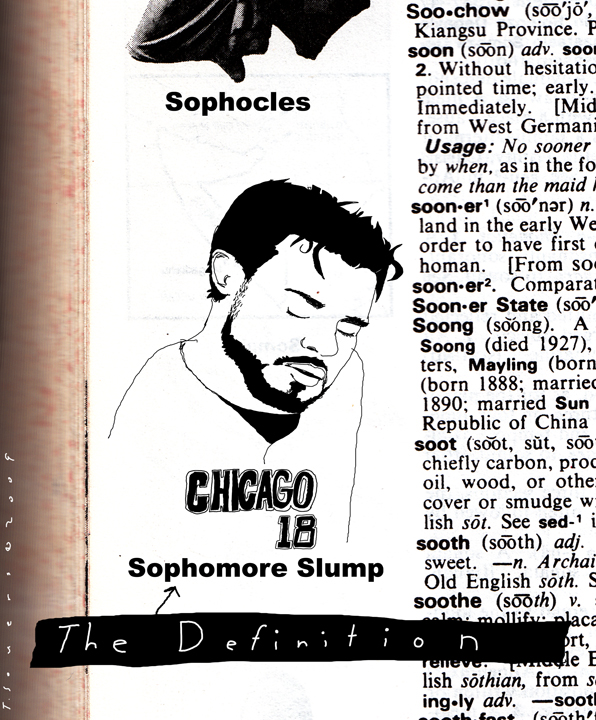 Man, did Geovany Soto ever have a tough year.

The WBC, the weed, the weight, the lack of hitting, pretty much the opposite of his Rookie of the Year season.

But really? Not that unexpected, especially if you put it in the context of "sophomore slump".

And I totally figure he'll be back to himself next season - that guy who goes and tells Big Z to settle the hell down. The big bat. The inside the park homer guy.

Geo's somebody the Cubs really need to be real.

I remember reading or seeing an interview with him and this isn't exactly what he said but it was like, "I don't wanna just be the best in baseball, I want to be the best of all time."

Hey, maybe that's unrealistic but it's good to have that attitude.

Thanks to Neil Finnell over at Chicago Cubs Online for this "Sophomore Slump" idea, and if you go to their place you can read the latest on the Milton Bradley saga - he may be going to Seattle like, soon.

Please make it so.

I finally saw something that made sense for the Cubs. It's on MLB Trade Rumors.

No, not the part about getting Marlon Byrd.

It's the part about keeping Reed Johnson.

We've all heard that until Milton Bradley's gone, the hands of the Cubs are kinda tied, right?

He continues to hamper the Cubs as there were tons of talented center fielders available, they all went away and now we're left with Byrd or Crisp or somebody.

For a year, and for a lot less than what he got from Boston.

To me, that says they want a placeholder.

So, why not just keep Reed?

Keep Kosuke in right where he belongs, you keep Alfonso in left where he's in the only place he makes any sense, and if you believe in him bring up Tyler Colvin to mix in with Reed, (and Sam Fuld is fun to watch).

I don't know about you, but next year? I'm just not feeling that "this is THE YEAR" thing.

Maybe I've got blinders on, but I like Reed Johnson, it's simple as that. 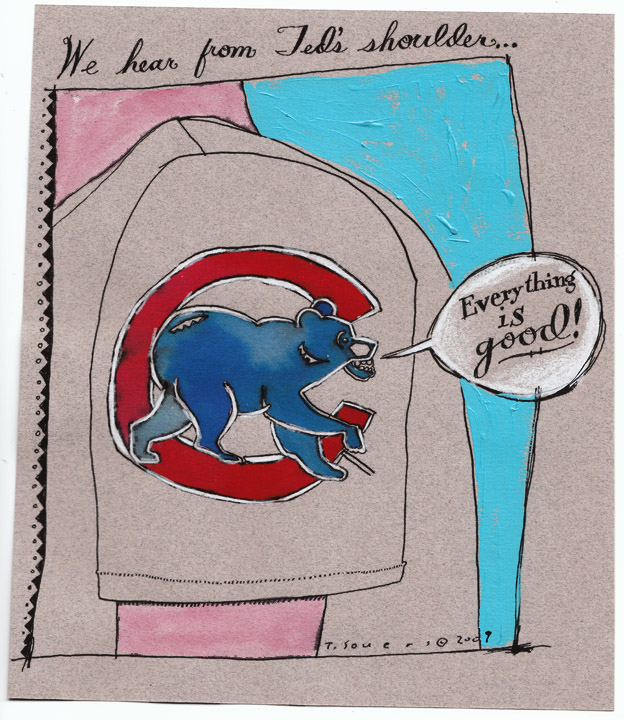 I got a call from Larry.

That would be our friend Larry O'Brien who also happens to be Ted Lilly's agent, a totally cool guy, and also the one who got our card to Terrible Ted. I've been dying to hear from him.

Here are the highlights:

Ted was "...thankful for all the kind words from the Cubby Blue fans,"... his "arm is feeling great," and he's looking forward to a "big Cub year this year".

So that's pretty awesome guys, and thanks again for all those "Get Better Ted" wishes and making that post so much fun.

Not alot else going on with our favorite team, so... you wanna talk about the professional football team from the largest city in Illinois?

I just... can you imagine being a season ticket holder at Soldier Field?

I don't really understand all the money stuff, but I think you have to first buy a Permanent Seat License (PSL) for, well... look here. So you're spending anywhere from $15,000 to $300,000 for the right to be able to buy the actual season ticket.

You think those guys are pissed off about this horrid, wretched, headless fake Bears team?

Okay, lets talk about the Bulls.

Is it the player's fault that they're all on the court at the same time, sucking?

I'd say they're being run pretty much like the Bears this year.

The Team That Saved Chicago In 2009 plays on skates, and they just signed a winning nucleus that should be around for years to come.

They won yesterday 4 to nothin, they're in first place, and if you're missing baseball watch this goal by Marian Hossa. Like a coach hitting infield practice.

The longer Milton Bradley stays on the Cubs...

One time a guy put a piece of cheese in my heating vent. In my office.

I didn't really notice it for awhile, but then one day I was like, "Man, something smells."

And it got worse and worse. Drove me crazy.

I pulled my whole office apart.

They don't figure out how to trade Milton Bradley, that'll happen with our favorite baseball team.