« The Amazing Mark DeRosa Peg! | Main | A waiter's story, and how not to open a bottle of champagne. » 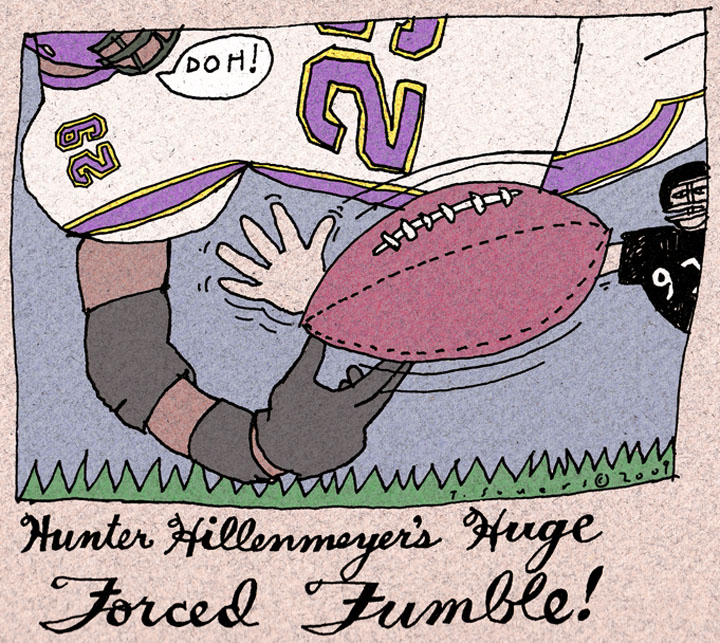 Well it sure is nice to be able to say something good about the Bears before this stupid season ends.

An absolutely thrilling overtime win on Monday Night Football over Brett Favre and those scary Vikings.

The announcers were Ron Jaworski (why is his nickname "Jaws" when it should be "The Worstki"?), Jon Gruden, and Mike Tirico. I guess I shouldn't be shocked any more when national announcers come off so blatantly anti-Chicago.

When Jay Cutler made the one bad throw for an interception, either Jaworski or maybe Gruden took it upon themselves, with obvious contempt, to scold Cutler from the booth. And when Brett Favre threw into 3 Bear defenders on their last drive in regululation and the interception was dropped by Zack Bowman, they said something about a "screen door" - something like, "He tried to force it in the screen door and it closed on him." Not really sure about a screen door reference on a freezing cold night like last night.

But the play of the night was made by Hunter Hillenmeyer.

One of the reasons he's my fav Bear is his name.

Say it like Jon Lovitz' Liar character would: HUNtaaaah HILLenmiyuh (and make sure the first name takes 3 times as long to say as the second).

Last night Huntaaaah was a bad ass with the short sleeves, the 15 tackles, and the enormous forced fumble (ouch Adrian Peterson - this fumbling thing is in your head forever) in overtime which led to the breathtaking bomb from Cutler to Aromashodu for the win.

So, just SO happy with a win, but I'll stick with my FIRE JERRY ANGELO (which of course includes the coaches) story.

Those guys have an awesome pitching staff, and DeRo's bat and QB leadership ought to make a difference for those guys, so good for him and I hope he does well and gets the same kind of adoration he had while here in Chicago.

Lastly, EVERYONE in my house has either had or is currently experiencing this hideous long-lasting flu/cold thing that's going around. I've barricaded myself in the basement with the couch, tv and Budweiser, and no one is allowed down here but me. My daughter actually recorded me on her cell phone saying "GET AWAY FROM ME! YOU'RE HOT WITH VIRUS!", which she uses as her ring tone when I call.

Lastly Lastly, if you haven't already please do the following:

1) go to i-tunes and download the Flaming Lips re-do of Pink Floyd's "Dark Side Of The Moon" album (depending on your age, you can use it to introduce either yourself or your kids to Pink Floyd, plus it's AWESOME).

2) See "Avatar" (3-d version ONLY) and get outside your own body for almost 3 hours of just amazing film-making. I heard an NPR interview with James Cameron who said something like, "This just happens to be an alien story, but the technology exists where, if you wanted to make a new "Dirty Harry" with a young Clint Eastwood, we could do that."

Wow. Giants Fans not so happy to begrudgingly so about getting DeRo.
http://giantsbaseballblog.blogspot.com/

If the Giants fans aren't happy about DeRo, then they're all too damn busy smoking Timmy's leftover weed and eating Choco Tacos. And they would also be IDIOTS.

Tell me you caught the opening to last night's pre-show with Giangreco and Ditka doing a spoof of a Christmas Carol. It killed me. Ditka as the ghost of "Bears past". Giangreco: "Oh this is going to turn out ok? Just like that job you took with the Saints?" Ditka (yelling): SHUT UP THAT'S NOT FUNNY

And god. The verbal BJing the ESPN crew gave every little thing Favre did. *rolls eyes* There were some [Ferris Bueller voice] choice comments about that on Twitter last night. CHOICE.

I'm glad the Bears beat them just for that.

It's not often I root for the Bears, but I was pulling for 'em last night!! Great game!!

Yeah, announcers LOVE Farve! Gruden went on and on about how this proves that Farve can play in the cold...

...of course, if the Bears could've caught the balls he threw to them....

DB!
Your "verbal BJing" - the exact thoughts I expressed to Sutter in a text last night.
Revolting.
Plus, why do they call Ron Jaworski "Jaws" rather than "The Worstki"?
Or just "Fat Ass"?
I swear I'm gonna do a post about that and maybe the nickname sticks.

I used to hope the D would kinda "hold up" on hitting Favre so he wouldn't get injured. But last night when he got that whiplash and held the back of his head? Felt pretty good watching, is all I'm saying.

I have to say this is the first time I enjoyed watching Favre get worked over by the Bears and I did enjoy this very much. I do think the critical play to set up Cutlers TD pass was a shaky field goal attempt. I am sure they will trust Cutler more in the future than settling for a 45 yarder.

One day last week I think I wrote here that the Bears had no chance to beat the Vikings. That was my "angle"...

And I was wrong.

The thing about angles in sports is that every professional who writes or announces,and every amateur who blogs, posts comments or pontificates at the local bar has to start out with an angle.

You go into the discussion with this POV you're gonna defend and then you watch the game and sieze every opportunity to point out the wisdom of your pre-selected angle.

Thus my announcement that the "who-gives-a-crap" Bears couldn't win last night. And thus the ESPN deification of Favre before the first snap.

Come to think of it...the frozen, unfriendly, hostile Soldier Field, and the nothing-to-lose Bears playing for respect would have been a much better angle, eh?

Hindsight kicks the shit out of "angles" sometimes, doesn't it?

SWEDE!
Hey Buddy, how's the snow?
It's kinda blowing away here, because it's getting cold.
You could see it last night.
Yes, it WAS enjoyable watching Favre get "worked over by the Bears" last night.
And I too believe the coaches will trust Cutler more in the future.
Why?
They'll be new coaches.

HIlariously put, Bud.
When they went to Mark Giangreco (sp?) after the game, the first thing he said was that Peterson fumbled "just like I told you he would."

DeRo a Giant, I'm ok with that, what were the Cards thinking? Will the Bears think about Lovie and Angelo? I think Jay Cutler is pretty good when he wants to be. I think he plays better with a lead and when his O line blocks. I think Hunter Hillenmeyer is awesome, my wife has a cousin named Hunter, he plays fooball and hits hard too. I think Devin Aromashodu should have his own line of Aromatique products. I think the Vikings and Saints aren't the locks they used to be. I think Boo Boo Benson got dissed by the Pro Bowl. I think I need another cup of coffee....

I'm joining you with my first cup of the day.
The Vikings, I thought early on, were going to the Bowl.
I wonder what happened between the first Bears shellacking and now. Somebody key musta got injured or another team figured something out.
Huntaaaaaah IS awesome.
And I'm glad Boo Boo got poo poo'd.