For Cub Fans, it's Agony and Ecstasy time 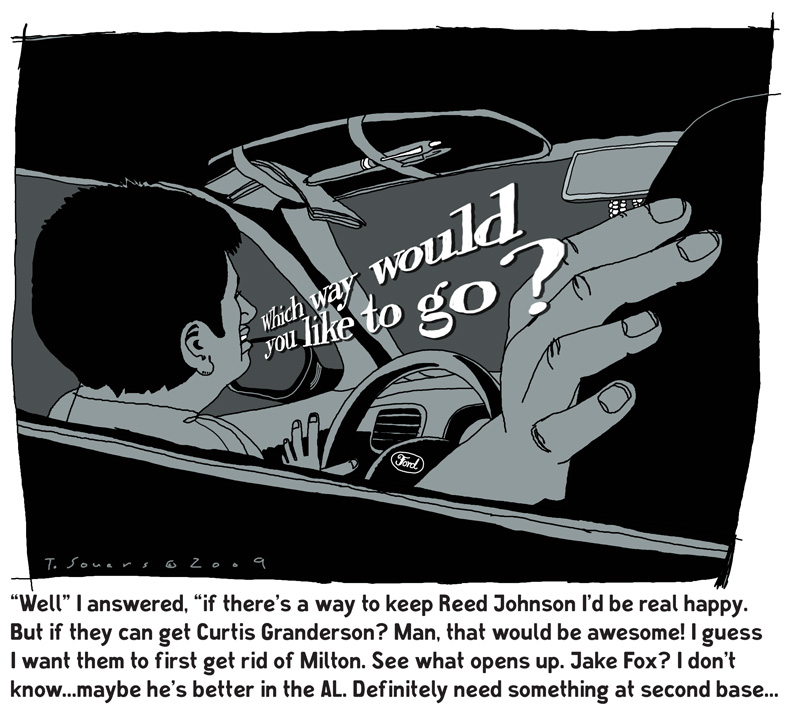 Remember when the World Series would end and you wouldn't hear squat about baseball until Spring?

Well, baseball's top of mind right about now, and it yanks you both ways - the agony of losing a player you really like, and the ecstasy of possibly getting an amazing new talent.

I was in a cab the other day, thinking about it. The Cubs are talking about maybe being able to get Curtis Granderson? That's kind of a no-brainer. Lead-off centerfielder with a glove and a bat AND supposedly great in the clubhouse?

But that's when you realize maybe Reed Johnson's the odd guy out - I mean yeah he's got alot more pop than Sam Fuld, but why couldn't Sam back up Curtis for alot less cash?

Sam's got an awesome glove too.

But I've invested so much of my Cub Fan soul into Reed Frickin' Johnson. He's cool, he plays with pain, he's fearless and a fabulous team mate, he made the best catch I think I've ever seen. Hell, we'd probably be buddies if he liked Budweiser alot or I was an amazing professional athlete.

This is why it's hard right about now.

Milton Bradley? I don't even care to discuss it. Get rid of the guy and anything you can get will...how can I put this? Anything the Cubs can get for him - even if it's just a new Gatorade cooler - will be worth it just so I never have to experience that angst I felt all last season ever again.

Really. I don't care. Just make him go away.

Now the other guy I'm concerned about is Rich Harden. I put a link to a Yahoo Sports story in comments the other day, and the story (by a guy named Mark J. Miller) claimed Rich "doesn't have much interest in returning to Chicago since he supposedly felt overused and suffered from some poor defensive play by..."

See, here at Cubby Blue all we've got is me and you, and I'm not a pro. You don't see a Yahoo Sports logo anywhere here, right? So I think you cut me some slack when I mess up a quote or when a game's being played. One thing I do to make sure you know I'm going with my gut rather than flipping thru web pages to find an actual quote or story is this: I use words like "supposedly".

Which is exactly what Mr. Miller (you'd assume a pro, right?) used in the middle of his Yahoo Sports story: "supposedly felt overused".

Do you actually believe he said that?

Some of you pointed out that he was actually treated with kid gloves... Anyway, I like Rich Harden and hope he comes back. I cannot imagine that he actually said anything remotely like that. Well, maybe the part about the "poor defensive play..."

But anyway, I forgot to tell you. There are about 100 teams who are TOTALLY interested in supposedly acquiring Milton Bradley. Some of them just might be in the American League. The others might all be in the National League's East or West. Don't forget, he's also one of those athletes who could just decide to go play badminton, or chess maybe. That's what I heard one time. I know he's got the contract going for him, but you should be calling for Jerry Angelo's head anyway.

This guy was sitting on an aging, hole-filled team that he'd created, and by the grace of GOD Jay Cutler fell out of the sky and saved Jerry's ass.

Jay Cutler is the thing Jerry got to point to to get your attention away from all the real problems, which are pretty much evenly dispersed everywhere you look on this team, and that ain't the player's fault.

Honestly?  I think Cutler is gonna be fine and it is good the Bears finally got a quarterback, but that wasn't anything Bears management had anything to do with.

That was just plain freaking luck.

I'm just sick of all of those guys - Lovie, Ron Turner, the whole lot.

Again, I'd like to extend a big THANK YOU to the NFL Network for not being on in my house so I didn't have to watch last night's disaster.

And I'm not gonna get all worked up about a bad performance from a qb who went from Denver's line and offense to Chicago's.

This year is literally like watching Tony Stewart racing in my 1996 Windstar.

ps: has anybody ever actually gotten mad enough to really create an 800 number to handle calls like getting a gm fired? If anybody has the time please take this idea and run with it. I'm just too busy to do all that, but I'll definitely have time to call. SOMEBODY DO IT.

NFL Network: Thanks for keeping me from watching the Bears on Thursday.

I went to the Bears/Cardinals game last Sunday.

No matter what, any year going back to the stone ages, if there's one thing you can depend on with the Bears it's a defense that makes the other team wish they'd never showed up.

I was appalled at the sloppy tackling, the lack of a rush and resulting non-coverage in the dbackfield.

But more than anything, not one time did you hear a big hit.

We had really good seats - I guess the club section (is that what they call it?), and in the 4th quarter I walked into the lobby area. Absolutely packed with Bears fans watching the other games on all the giant flatscreens.

I got mad when they came out with the NFL Network. It's probably only 5 bucks a month or something, but I never signed up. And this week I'm GLAD I can't watch another lackluster, uninspired performance by that team with the Bear uniforms on.

One last thing. Hunter Hillenmeyer. He's been one of my favorite Bears for years. Stretching to make a point here, but he is Steve Kerr to Brian Urlacher's Michael and Lance Brigg's Scottie (or vice versa there, depending). To ask Steve Kerr to be Michael ain't fair. Plus, the guy's playing with busted ribs. When he got hurt Sunday, it was in front of us - that was one nasty tangle. Guy behind me said he saw Hunter getting fitted with a flak jacket. Then he was back in. Musta been some amazing painkilling shots plus a tolerance for pain that you and I know nothing about.

Anyway, I admire that guy.

On the other hand, there's Jerry Angelo and Lovie Smith.

Don't get me started.

Here's what I'm hearing: when the Cubs get rid of Milton Bradley they're gonna pay a steep price.

Here's what I'm saying: they also know what the cost of keeping him around will be.

And lastly, I cannot do a cartoon of Sammy Sosa any better than the photos floating around of him so, sorry guys.

Man, anything can happen. 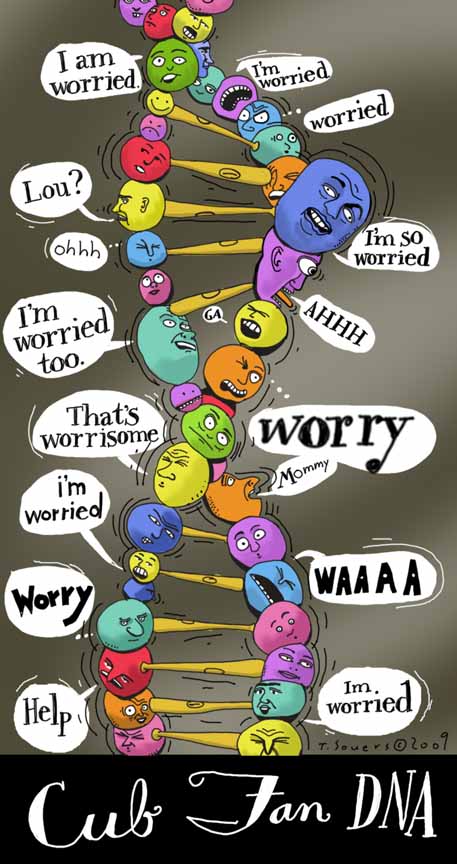 I was in my office working like 10 dogs when Olson came in.

"Did you hear about LIlly?", he asks?

I look up from my computer and wonder if I'm gonna need to throw up.

"They say it's all good." he says. Then adds: "But that's what they said about Prior."

All my nerve endings go off the charts and I become irrational, partly insane.

Danger Will Robinson, my breath has grown hair.

Of course that's what they said about Prior, of course they're gonna say that about Terrible Ted. What do you think they're gonna say? Why do we immediately go to the worst possible scenario every freaking time we hear something like this?

No Cub fan reading this blog is old enough not to have had this particular type of Worry DNA magically and horrifically transported into their body. It comes with the territory. It comes with your Cub hat and your "Left Field Sucks" t-shirt. It's reinforced every time you hear the replay of Ron Santo howl when Brant Brown dropped that fly. Or when you see a black cat or go have a doublacheez at the Billygoat.

I sometimes think we choose to revel in it. Because we have no choice.

Today you read that Reed Johnson and Rich Harden filed for free agency.

Okay so they're both gone, right?

Well, hang on a minute.

I'm not gonna just fall for it. I'm recognizing it for what it is: my own hysterical worry gene.

And I'm here to tell you Terrible Ted will be fine. Probably this surgery makes him stronger and his Cub career goes longer.

ps: Think I told you it's really really busy, and will continue to be thru the rest of the year. But be patient. I'm not going anywhere. 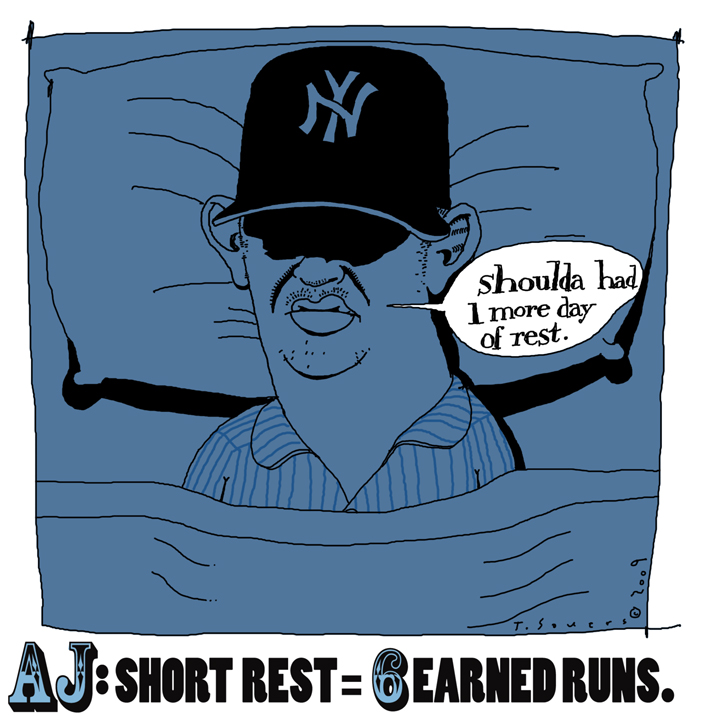 I'm certain there will be angst in NY today, with Joe Girardi's decision to go with Burnett on short rest not panning out a day after it worked pretty well with CC Sabathia. Last night the Phillies smacked Yankee pitching around and won 8-6.

So the thinking goes, I think, like so: The Yankees were probably gonna lose to Cliff Lee anyway. Had Girardi let Burnett rest and started Gaudin, then Burnett woulda been rested and shut down the Phillies in game 6 for the WS title. Now Joe's looking at starting Andy Pettitte in game 6 on short rest and Andy's no spring chicken.

But I'll tell you what, the Yankee bats just look too scary, and I thought the Phillies and Ryan Madsen were pretty lucky in the 9th.

Until he gets off the mound, I hate to say it but I'm pulling for the Yanks.

Last thing - Chase Utley. There ain't no bigger place to state your case for superstardom and future HOF consideration than right here. He's 6'1" and a hundred and ninety pounds and smacking World Series homers like they're nothin'. Man oh maaaan.

And another last thing - this is a shot of the moon over Lake Michigan out my office window last night. I'm one who believes weird stuff happens during a full moon. Probably AJ Burnett does now too. 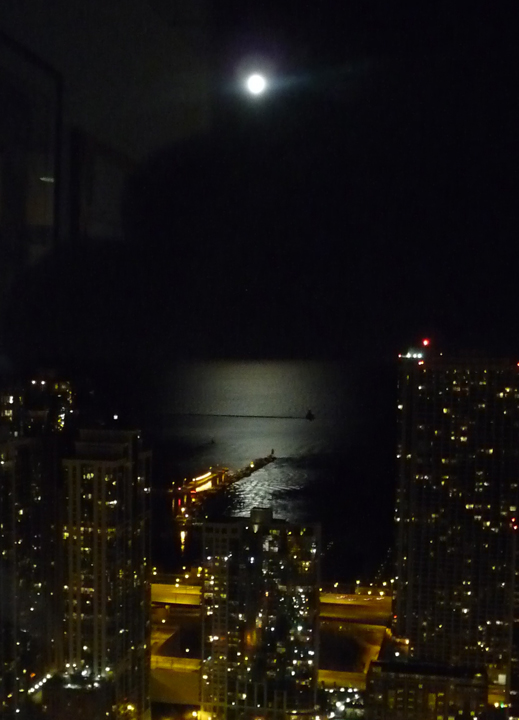