What does George Halas think about the 2009 Bears?

Well, that one kinda took the cake.

Surely George Halas is spinning in his grave tonight.

I look at Jay Cutler and I'm ashamed we brought such promise to a team in such utter shambles.

Ah, but this isn't about me.

Shame on you, Jerry Angelo.

I've said it before - it was by the grace of the Football Gods that Jay Cutler fell out of the sky and landed in your lap. And you said, "Oh thank you Gods, because without this guy for me to stand next to, I'd be standing next to this crap line I threw together with rejects and my picks and old people, and real Bear Fans would run me out of town on one of those 1980 yellow school buses we shuttle those same fans to and from Soldier Field in."

Winter isn't even here yet and it's already been waaay too long.

Bears vs. Vikings. Just...look away.

Actually, and this is ABSOLUTELY CRAZY, but I have this weird feeling that the Bears will win tomorrow.

Same feeling I had right before the 2004 baseball season started, when the Cubs won the Series.

Weellll, I was trying to think of what Cub Fans have to be thankful for, and there isn't just a whole lot, and I didn't want to do another illustration of Tom Ricketts, and I was looking through a bunch of old photographs and found this Cub journal from '91.

So I scanned some stuff out of it. 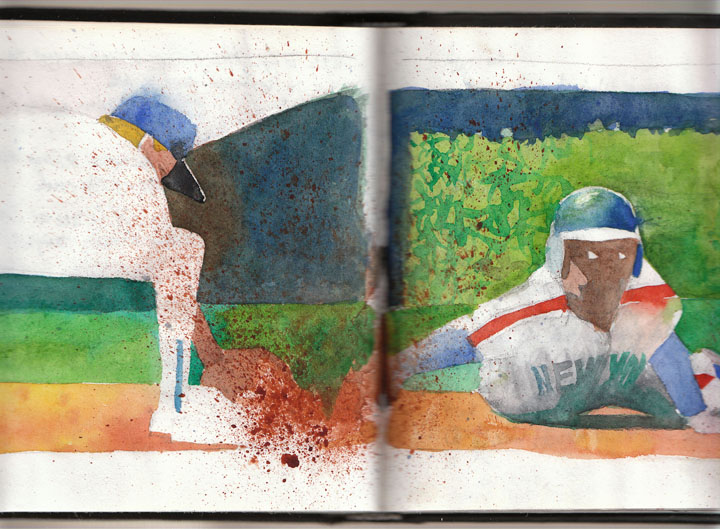 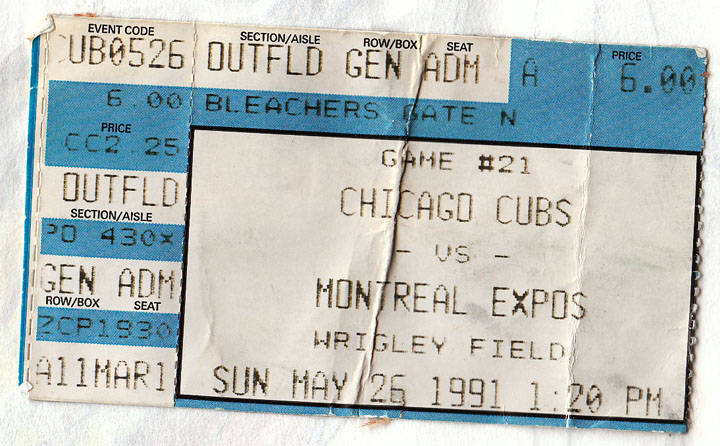 It was the year Zim got fired. 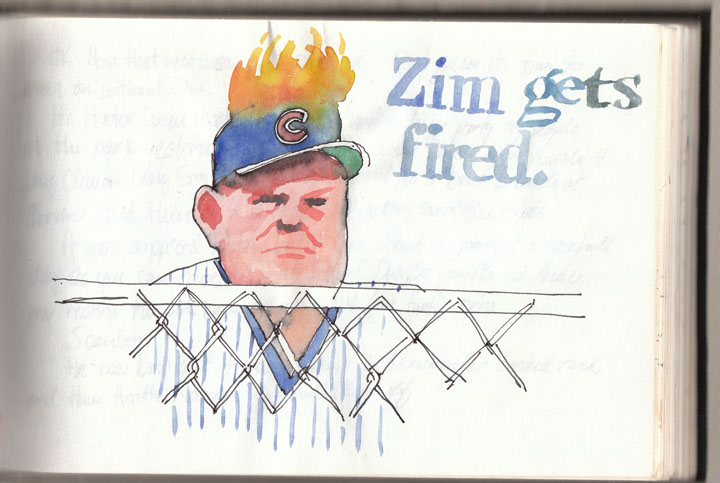 And Joe Girardi here got creamed in a play at the plate with John Kruk. You can't read my writing, but it quotes the Trib's headline: "Hit by a Kruk". 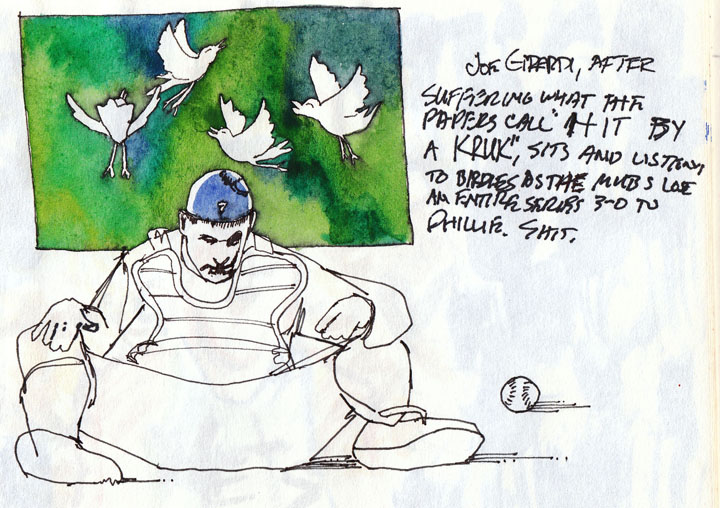 And it was one of the first times I started to draw what it felt like to be a Cub Fan. In this case, I decided to draw something I'd rather be thinking about than the Cubs. (The top page is actually opposite of the bottom page.)This was early in the season. As you recall, Ryno always started out slow (hitting .162). 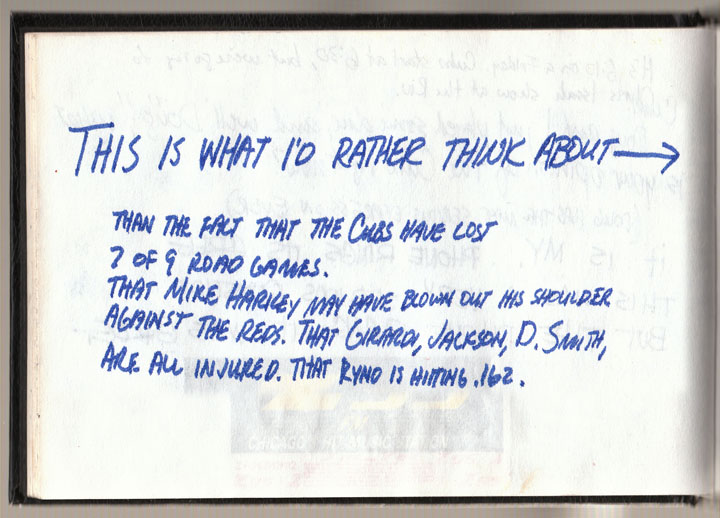 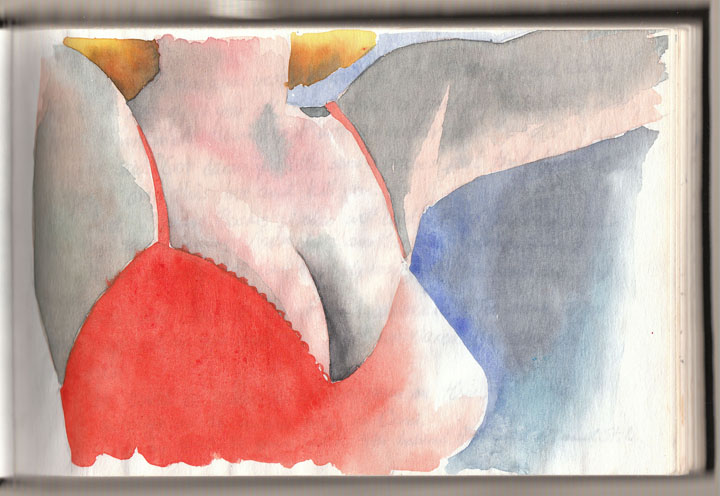 Almost 70 games into the season, the Cubs went on a 9 game losing streak. 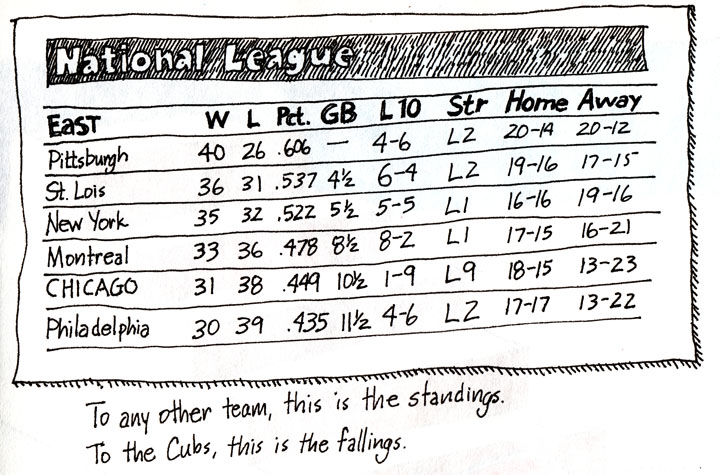 August 29th, it says "I saw Hector Villanueva hit a triple. In Wrigley."

And on September 19th it says, "Well...the hell with the Cubs. It's football season anyway."

And I summed up the season with a drawing based on a popular commercial at the time. Can't remember what they were actually selling, but it showed an old woman lying at the bottom of some stairs and she was yelling "I've fallen and I can't get up!" 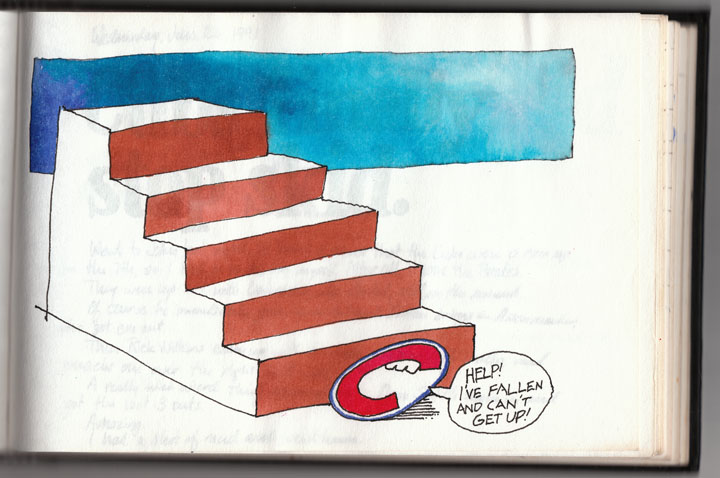 I'm thankful that you all are here.

Okay, setting myself up for total failure if you don't participate, but oh well...

Here's the deal - we know Terrible Ted had a minor shoulder thing awhile back, and even though it was super minor, we want him to feel better quick. So I thought we'd send him a card.

Either email me or put in comments whatever you'd like to say to Ted, even if it's just your name, and I'll update the card above by putting your message in it. On Friday I'll finish it, print it out and send it to him.

Okay - SEND ME SOME STUFF - I want to update this post every day if not every hour (okay, maybe a little ambitious, but it's TED).

And besides, who's your favorite lefty #30 bad ass stud pup starter that runs over opposing catchers in a single bound in the entire universe who happens to play for the Pros on the North Side of Chicago?

In that story, they say a dozen (12, twelve) teams want him.

Joe Girardi wants him to spell Johnny Damon in left, Charlie Manuel wants him to play third, Tony LaRussa wants him to stay, Marty Scorsese wants him for a gangster movie, the Bears want him at left tackle...and you and I wish he was just still a Cub.

Just the other day somebody asked me how he got traded, and I'm pretty sure if I looked back on this blog I could find out... something about left handed and Jake Peavy and bad batting during the playoffs and...it's all just smoke now.  I looked at them and said, "I have no idea."

Now I look at Mark DeRosa and all his talents, and I look at how the MLB has become such a gigantic money making scheme and I think...one day? It'll totally be possible for a guy like DeRo to play for every team.

It's the next step after they do away with umpires.

They'll come up with the "rover" position. (It'll make people who think the DH is an abomination just walk in front of trains.)

There could only be 8 of them per league - no pitchers - and Scott Boras' son will have figured out how each of the 8 would have the first billion dollar contracts.

So pretend we're way in the future but DeRo is like he is right now.

He plays 2nd for the Cubs on Monday afternoon, then walks across the field to travel with the Cards to their 3 game series in Los Angeles. He plays 3rd for the Cards the first two games, but then gets a call from a Steinbrenner saying he's gotta rest his left fielder's legs - can he fly to New York tomorrow.

When you're the Rover, you get to do what you want.

He plays left for the Yankees and gets a call from Milwaukee - the Brewers need him at first base.

He says no, not really and keeps playing for the Yankees, and while there does a couple photo shoots.

Then it's stone crab season in Florida, so he flies down there and just hangs on the bench - the Fish didn't really need a rover today.

And then when the playoffs come, there's some kind of coin toss for each of the rovers.

And of course the Cubs choose tails and get Aaron Miles.

ps: I just went on Google images and typed in things like "Obama" and "Girls in bikinis" and blatantly used photos I found there. If one of them is yours and you're angry I did it let me know and I'll take it out of the gif.

I'm bringing back the Mark "Prior Watch" 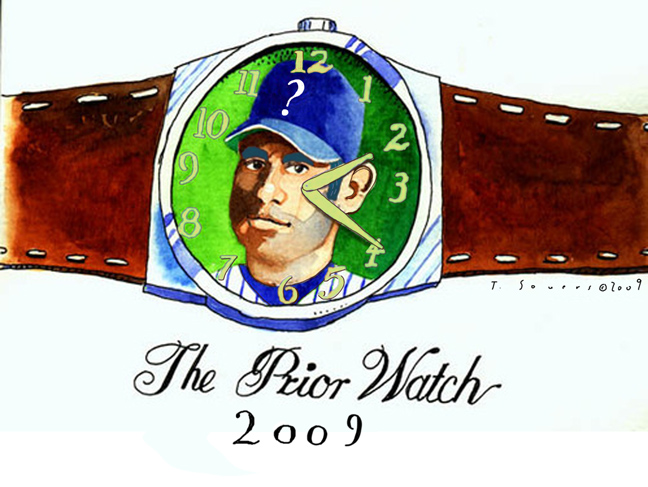 I was looking at MLB Trade Rumor's list of 2010 free agents the other day.

Down there under starting pitchers, between Sidney Ponson (33) and Horacio Ramirez (30) is the former future of the Cubs, Mark Prior (28).

I don't know why, but doesn't it seem like he should be about 35?

But he got hurt, and... what the hell really happened with him anyway? There was alot of down time and he went from the invincible guy with the tree trunk legs to a wandering now-he's-here now-he's-not wreck. Alot of people thought he was either a sissy or a dick at the end, but I gotta say if you're a pitcher and your arm goes weird?  You'd be freaking out too.

As in years old.

Come on man, it's just not right to be washed up at only 28.

The Trib reports that Buster Olney reports (I can't find the Olney thing) that Prior will audition for scouts again. Doesn't say when or anything. But I gotta say I hope Prior does get back out there.

He never came close to the Cub-love that Kerry Wood will probably always have, but hell, he was one serious Cub-Stud for a little bit there.

Okay, here's the headline I didn't do for Turning White Sammy Sosa, and it kinda needs to have an accompanying snare drum rim-shot and for you to remember steroid talk.

Sammy - you shoulda used the clear instead of the cream! (rim shot here!)

I'm going back to my office now, but you're supposed to laugh here once in awhile, dammit.