« Chase Utley: Bad Time To Get The Yips | Main | The Bears Wear Duncehelmets, Beat Themselves »

I don't wanna talk about stupid Jerry Hairston scoring the stupid winning run on a stupid Angel error in the stupid 14th inning of that stupid ALCS game.

This story is waaay funnier, and alot more profane. 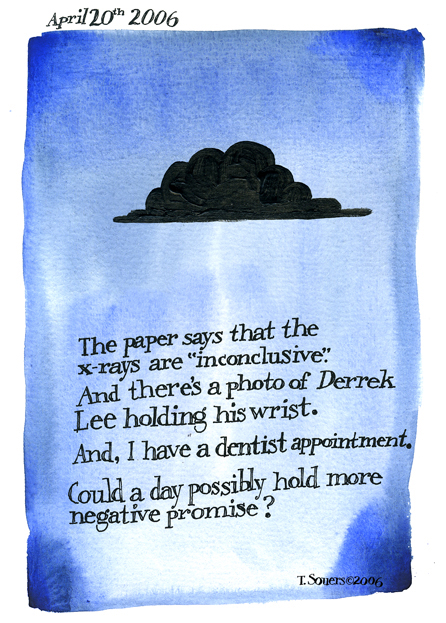 The day I found out Derrek Lee had hurt his wrist I had a dentist appointment. It was in the paper, but they weren't saying how bad it was yet - there was "nothing conclusive".
So...not in the best mood as I walked in.
My dentist is truly a great guy and friend since I moved to Chicago, he knows I'm a giant sissy in the Chair, and I demand as much novocain as insurance will pay for.
So after a little drilling or whatever, I leave there with my entire head completely numb.
I was parked facing south on Lincoln just a couple blocks north of Fullerton.
When I parked there was no traffic.
When I came out it was a nightmare - some construction going on towards Fullerton.
But it's nice out and I put the top down, which I would regret later.
I'm now attempting to join this southbound crawl. Traffic would go 1 mph, then the light would turn red waaay down the street and the crawling would stop. Goes on for a serious 6 minutes and nobody's letting me in.
Finally, this woman appears to stop, but in reality she just hasn't seen me, so she hauls ass to move 3 feet to block me in.
Now I figure maybe my blinker's not enough, and I angrily lurch a foot out to state my intention.
Well, who knew there was a bike path there?
The second I moved, a 10-speed guy all decked out like Lance Armstrong comes FLYING from behind me, just missing the sticking-out front left corner of my car.

We were both lucky he wasn't killed. He slams on his breaks and turns around, rightfully pissed.
He yells, "You STUPID ASSHOLE MOTHERFUCKER!"
Wow, I really was stupid, and I look the part with my top down and all, and everyone in the southbound crawl staring.
Finally a guy actually stops to let me in, and I quickly decide to do a U-turn instead of getting in the southbound crawl.
So I venture into the middle there and HOOOOOONNNNKKKK!
A guy coming the other way slams on his breaks while I do the same.
"MOTHerFUCKing ASSHOLE!" the guy flips me off as he goes around me.
Man, I am having a bad day.
I complete my U-turn and start heading north.
I get about 4 cars up the road and a guy stopped in the southbound crawl yells as I go by. He has no reason at all to be mad, except he's in the crawl and I'm not.
"PRICK MOTHERFUCKER," he screams, "THERES' NO U-TURN HERE!"
I lose it, finally.

I stop even with his window, look him in the eye, and at the top of my lungs this comes out of my mouth: "FAAA EEWW MOW AH AH!"
Totally forgot about the novocain.
Red faced with the top down, I drove home.
That, my friend, is a bad day.
And it only got worse...

Because on the long drive home came the news on the radio: Derrek Lee is going on the DL for a real long time with a broken wrist. The season is in shambles, the summer ruined, and it's all I can think about when I pull into my Jewel, the novocain mostly worn off.

Everything you read here is true. 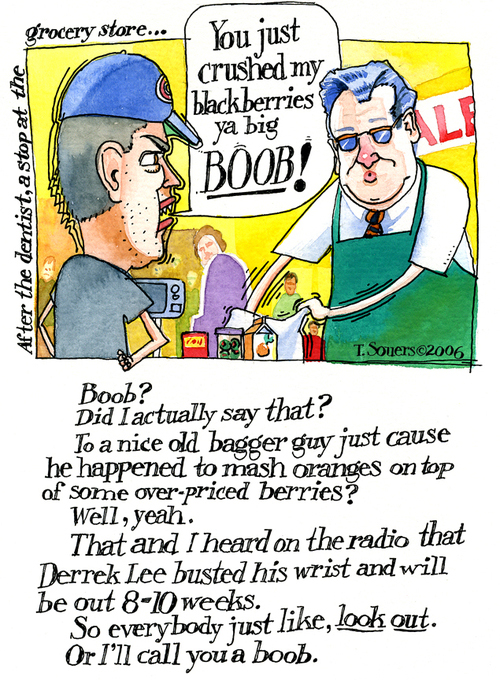 I still see that guy once in awhile, but I won't apologize.

Because he reminds me of that day, and he's still a boob.

If you've hunted around on my blog, you may have seen this in the "2006" illustrations.