« The Bears Wear Duncehelmets, Beat Themselves | Main | Rudy Jamarillo may be an answer for Lou Piniella's eternal question. »

Dodgers up against the wall. 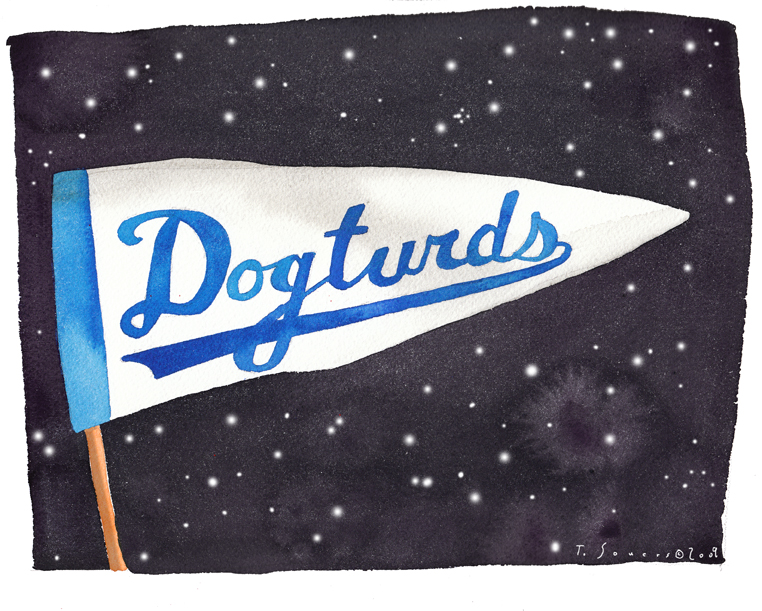 Man oh man, how about them Dodgers?

I am enjoying their misery, even if I can't seem to look at anything other than in the most negative of light. (Dogturds? Has it come to that, Tim?)

Down to their last out and down by a run, the Phillies' Jimmy Rollins hit a 2 run double which knocked in 2 runs which resulted in a 5-4 vic.to.ry. All the more notable because Rollins' double came off of Dodger stud closer guy Johnathon Braxton, and it's always a bad dagger when you get to the stud closer guy.

Or in this case, a good dagger.

And in a little bit of semi-Sammy Sosa stuff, Manny Ramirez had already retired to the shower for the 9th, and missed the most important part of the game. I could be wrong, but this might be the first bit of non-fawning press he's gotten in LA. Manny did say he caught the end of the game in the highlights, however.

I have to say I was mighty shocked at the previous game, when Hiroki Kuroda got shelled by the Phils. I seem to remember him from last year, kinda having his way with the Cubs. But I guess this year he's recovering from a herniated disc. Ouch.

Tonight it's Cole Hamels against Vicente Padilla. If you look on ESPN, Vicente is still in his Ranger's hat - I guess since he only became a Dodger on August 27th, they didn't have time for a Dodger hat photo-op.

Anyway, I'm hoping this NLCS ends tonight, and I seriously will have no argument this year at all - the best team from each league will be in the World Series. (The Angels ain't gonna beat the Yanks). Yet, how come I have an overall feeling of who cares? I have yet to sit and watch any of these games all the way through. Bad baseball fan? Busy at work? I don't like watching Manny?

I'll try to get my fan-ness up.

The Cubs are, I guess, gonna get in the news with hiring a hitting coach guru guy.

I'm just glad someone has the Dodgers' number. Nice, Manny. In the shower early? I loathe, abhor, and despise Manny...

Cliff Lee was pretty vicious in that game.

And yeah, I'm kinda like you - trying to muster up something more than the feeling of "I hope Team [x] doesn't win." Bleh. I'm so over the Phillies, but I suppose I'll hope they win rather than ZOMGWTFBBQ IT'S AMERICA'S TEAM, THE YANKEES!

Vlad has kinda reminded me of one Alfonso Soriano lately. "Free swinger" and all that.
And your eye rolling might just be getting started - think of all the long contract guys on the Cubs. This hitting coach may be about the only new guy the Cubs sign...

Free swinger. Excuse me while I do the Beavis and Butthead laugh. Because right now, dirty double entendres are all I have left.

I can understand Manny being an asshole. He is what he is and he ain't gonna change.

But what's up with Joe Torre? Why do I believe that a Joe Girardi or a Tony Larussa (or even Lou?) would have long ago established an inviolable rule: everyone stays on the bench until the last damned out!

We ALL have work rules that we have to follow, no matter how important we are or how arbitrary the rule may seem (see NY Yankees policy on long hair and beards).

I can only pray that we NEVER again have another prima donna Cub like Scammy or Meltdown who feels "special".

I'd rather lose than have to worship at the feet of some spoiled, wealthy, self-centered buffoon. Let's hope that Mr. Ricketts has some stones

Right?
Manny's quote was something like: whenever I get pulled from the game, I go shower.
huh?
In the freaking playoffs?

MLB Traderumors has a little piece on the Cubs offseason outlook.
Best use of the word, "absurd": "Soriano finished the season with knee surgery and will presumably be healthy for Spring Training. His contract is so absurd that the team has no flexibility."
http://www.mlbtraderumors.com/2009/10/offseason-outlook-chicago-cubs.html

DID SOMEONE SAY RICH HARDEN'S ASS?!

(Cuz that's all I really care about right now!)

What are you talking about? I don't have Rich Harden's ass. If I did, I doubt I'd be wasting valuable time typing about it here, Y'KNOW?