I predict the Cubs sale will be final this month, the Angels beat the Yanks and go on to beat the Phils in the WS. I predict I will do a post that fakes some rumors about how badly other teams want Milton Bradley, hoping with tongue in cheek that other GMs will pick up on it and try to get on the bandwagon. I also predict that I'm gonna stay in bed til I'm done with this cold thing.

In the meantime, anybody got any predictions? 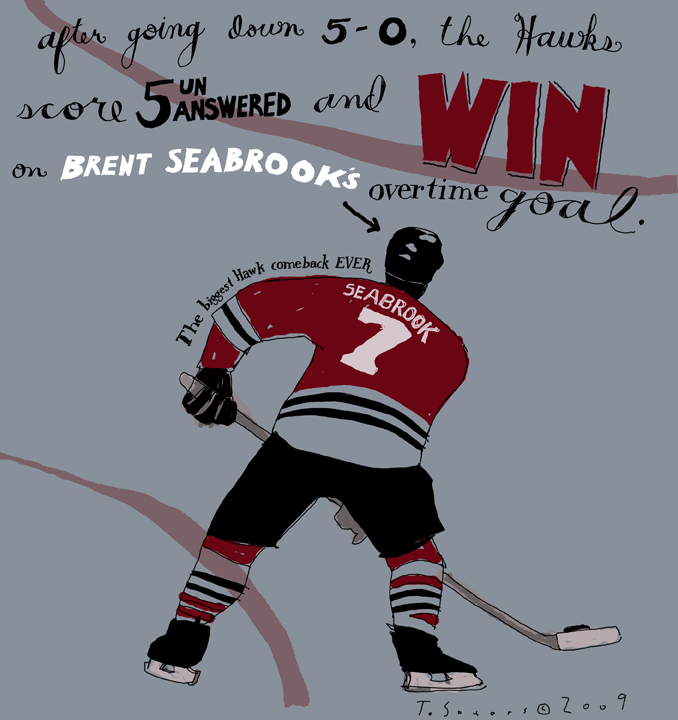 Think that built a little confidence?

The Chicago Blackhawks, after going down zero to five vs the Calgary Flames in the first period, scored the next six goals for their biggest win of the early season. The biggest comeback ever for the Hawks, which is saying something since they've been around since the NHL became the NHL.

This game...say it's really late in the season and the Hawks are down by 3 in the 3rd vs. Detroit. On the bench Toews or somebody says simply, "Remember Calgary" or "Remember October 12th" or "Remember that one time at home when we came back from 5 down and won in overtime when Seabrook scored that last goal against the Flames?" (He'll have to think up something cool.) But it's a mental weapon they can keep in the back of their minds - anything is truly possible, they can win under the worst circumstances.

I fell asleep on the couch drinking hot tea with lemon and a gob of honey watching the Rockies vs. Phillies game (Phils win when Rocky all season long dependable studly closer Huston Street melts down and gives up 3 runs after there were 2 outs in the top of the 9th and the Rockies had the game in the bag).

Then I woke up and thought football was on, so I flipped through and accidentally found a Hawks game when it was still 4-5 Flames.

Got to watch the end of it.

Sure it's only one game, but damn.

In other news, the Cubs file for bankruptcy! Hooray!

Okay, goin to the doc's. Maybe if they had a pr department and some Hollywood agents, they could have fun with it. Create a tv show called "Droppin' The Ball" with writing about the scale of "Two And A Half Men". And throughout, they just...drop stuff.

Matt: What happened to Rhonda?

Steve: Don't you remember - you dropped her!

Matt picks up his cell phone, drops it. Looks to audience.

Matt: Rhonda? Hey it's Matt. Listen about the other night I...Rhonda? RHONDA?

Steve: She hang up?

Bill picks up a rubber dog-bone, tosses it to Leon, but Leon misses and it goes between his legs.

You get the idea. Ron Santo can be the crotchety neighbor who lets out a yell every time something is dropped...Brant Brown can be the milkman with the signature "No use crying over spilled milk!" line. Plus there could be a parade of minor characters coming through, depending on who "dropped the ball" that week. This week could guest star the ump that missed the fair ball call in the Yankee/Twins game, or even David Letterman.

Dodgers went on to round 2.

I'm sooo freaking busy, and I apologize for no illustration today, but am working on one for what I thought was the most significant play of this series and the one Cardinal fans will remember forever - the error in left with 2 outs  in the bottom of the 9th. No matter what any Cardinal fan will tell you, that's this year's post-season headline.

Their GM, John Mozeliak, traded the Card's top 3 prospects to get Matt Holliday.  Read about it here.

It certainly was the move that put them over the top, but they ran into the same buzz saw the Cubs did last year, they got nothin' except first place in the NL Central, and now they're looking at perhaps losing pitching genius coach Dave Duncan, all the lost prospects, and the unenviable task of trying to sign this year's mercenaries, Holliday and DeRo, to real contracts.

All that is good for the Cubs, of course.

And I gotta say, it's nice not being the team with a "Bartman" or a "Durham" play to remember a season by. 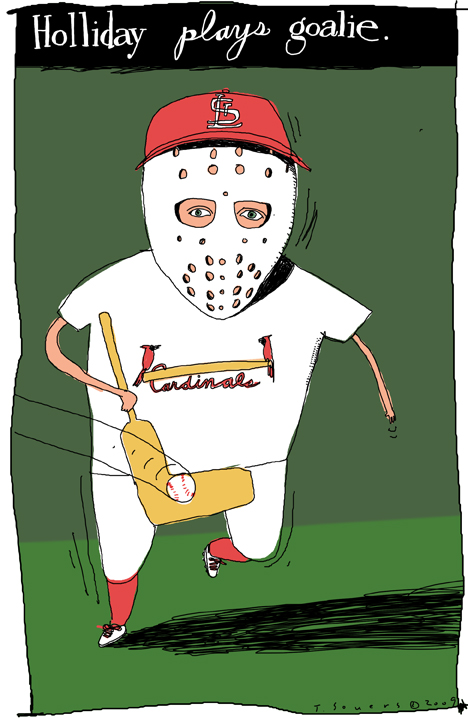 This is pretty mean, I guess, since he said he couldn't see the ball, but the bottom line is Matt Holliday dropped it.

James Loney hit a liner out to left, and Holliday charged it, but the ball was in the black hole.

It looked to me that he blocked it like a goalie.

Glaring since it should have been the last out in a game the Cardinals had in the bag. Instead, the game goes on and the Dodgers win.

And Holliday, he's been in the center of blowing it in big games before - I totally feel for the guy.

Had the game ended like it was supposed to, it woulda been Mark DeRosa with the winning run on Colby Rasmus' shot to center.

Actually I was still at work and that was the only play I got to see live. It was awesome hearing our Bob Brenly's voice again. And this morning, I see that Bob's talking to GM's about managing again. Ouch.

Anyway, the Cards...this feels like watching the Cubs last year.

But they'll get to go home and re-group. Lets see what happens. 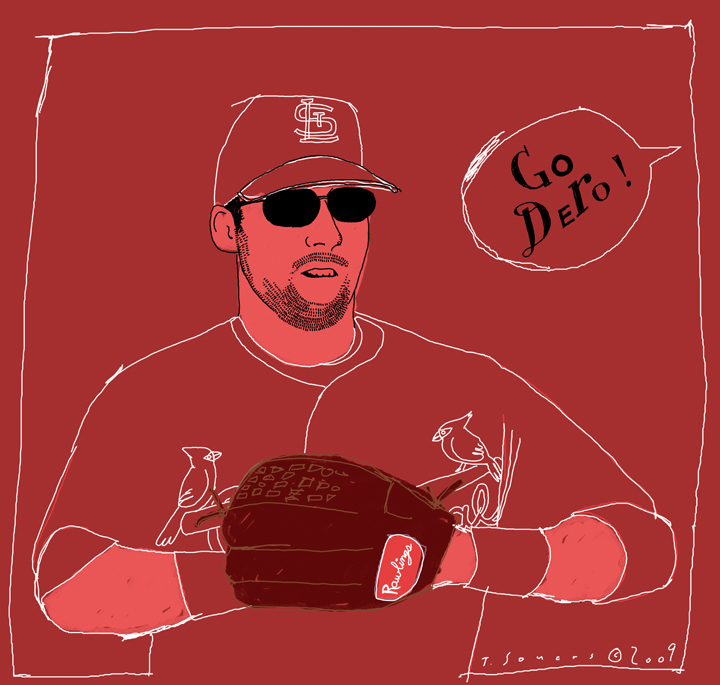 Make no mistake, this is and will always be a Cubs blog.

But I'm gonna do something you'll gasp at: I'm pulling for the Cardinals.

You might remember him - big right handed bat, kinda clutch, and played every position but manager?

He'll be at the hot corner tonight when the Cards face the Los Angeles Dodgers, who became my second most disliked team behind the Astros when they added Manny and ended the Cubs season last year.

Also, our Derrek Lee was named player of the month for September, and all the other baseball owners approved the sale of the Cubs to the Ricketts family.

Derrek TOTALLY deserved it, hitting .386 and slugging a freaking .795, and the Cubs sale should be finalized by the end of October.

I fully expect a number of you to vocalize your disappointment with the Cardinal choice, but it's the only way I could go. If you read this blog, you also know I spent some high school time across the river from St. Louis, and while I never went to the red side, I had to admire the relationship between the Cards and the city. Plus, I'll always be a DeRo guy so...Go DeRo!